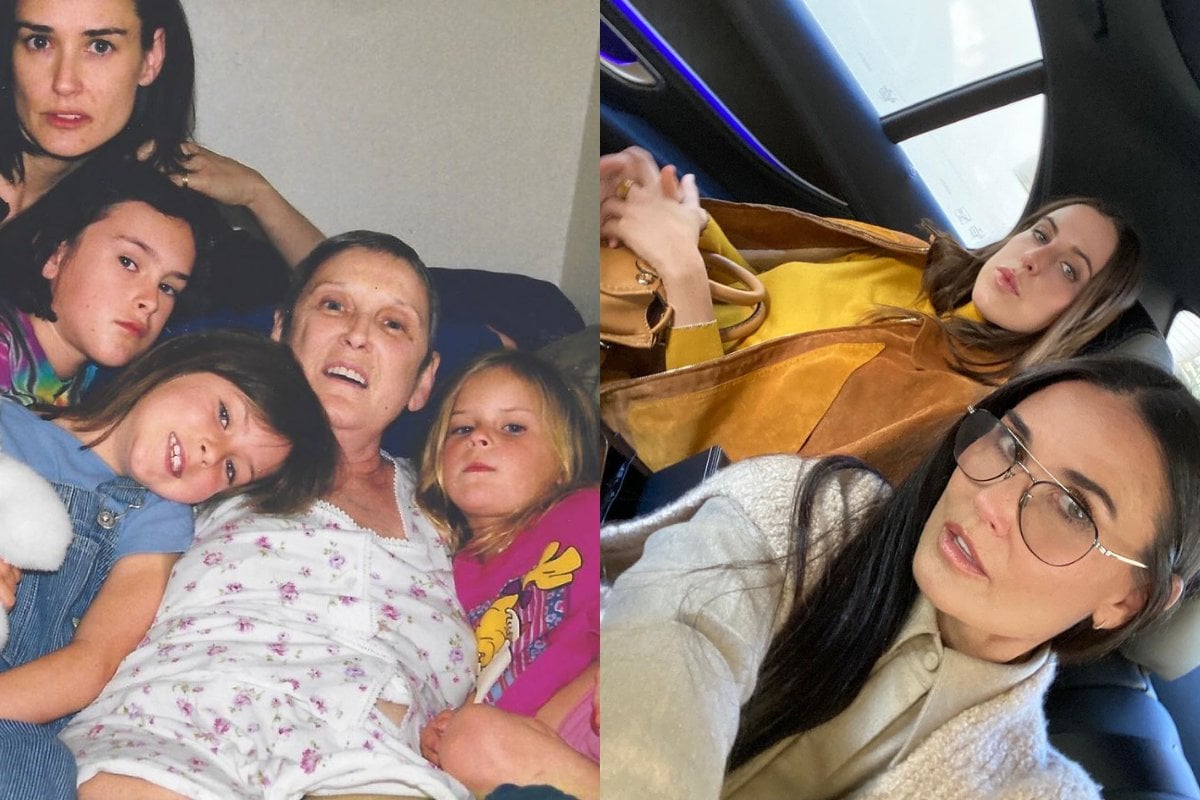 This post deals with addiction and could be triggering for some readers.

Demi Moore and her daughters appear closer than ever.

In a campaign for swimwear line Andie, the 59-year-old actress modeled alongside her three girls, whom she shares with ex-husband Bruce Willis: Rumer, Scout and Tallulah. Back in June, Moore shared photos of the shoot on Instagram and wrote about how important it was to include her daughters.

"Over the past year, connection has become more crucial than ever," she wrote. "I've been a supporter of @AndieSwim from the beginning as an investor, and now, more than ever, felt like a perfect time to join them in welcoming a summer of freedom and togetherness. Especially sharing it with my daughters!"

"It was important to me to include my daughters in this campaign, and I hope others seize opportunities in their lives to create meaningful connections and celebrate every moment with the people they love."

Reflecting on working alongside her mum for the photoshoot, Rumer said it was a "dream come true" to "share this with the incredible women in my family". Additionally, Scout said the photographer Cass Bird "captured the moments in between, the true intimacy of our family".

Moore regularly posts photos with her three daughters on Instagram, reminding her 2.4 million followers just how close-knit they are these days.

Here what all four women are up to now.

Demi Moore, 59, continues to act. In 2017, she joined the cast of Empire and appeared alongside Scarlett Johansson and Zoë Kravitz in the comedy Rough Night.

In September 2019, she published her memoir, Inside Out, which quickly became a New York Times bestseller. In 2020, she appeared in Michael Bay's pandemic-themed thriller Songbird and landed the lead in the new drama series, Dirty Diana.

During lockdown last year, the actress, her daughters and her ex-husband, Bruce Willis, quarantined together in a house in Idaho, along with various other family members. They posted photos and videos of themselves reading, posing for photoshoots and bonding outdoors.

In July, she holidayed with her eldest daughter, Rumer, in Santorini, Greece.

Rumer Willis, 33, is an actress and singer. She's been in movies including Hostage, The House Bunny, Sorority Row and Once Upon a Time in Hollywood.

"So grateful for choosing myself above any need to distract or numb out," she wrote.

Late last year, when appearing on Jada Pinkett Smith's Facebook Watch show, Red Table Talk, she opened up about how she lost her virginity at 18-years-old to an "older man".

"When I lost my virginity when I was 18, I was more concerned with the shame that I was feeling at not having done it," she told Pinkett Smith.

In an interview with American Addiction Centers on Instagram Live, Rumer admitted she realised her addiction had become a real problem when she began having panic attacks.

"When I would drink, I think obviously because it lowers your inhibitions, it gave me this false sense of confidence and I was almost using it as a tool … as a way to be this version of myself [that] I thought was smarter, funnier, more confident, more interesting," she said. "And it's a lie, it's completely a lie. And it's this illusion of somehow you're this magical, sparkly version of yourself when you are drinking."

She began 'Sober January' almost five years ago, and apparently hasn't had a sip since.

"Part of [what kept me going] is my personality. I'm perfectionistic and so there's this part of me that was like, 'oh I have a month? Well, I can't go back now.' I made it a challenge for myself," she explained.

Despite the difficulty of growing up in the spotlight, she said she wouldn't ever call herself a victim.

"I would never say, 'Oh, I've had it so much harder. People don't understand. Poor me.' I'm not a victim of my life," she said.

"I've made choices like everyone else has and I've had a certain set of circumstances, I've had certain challenges. Comparison is the thief of joy. So I think if you're looking to someone else's life, trying to compare it, that's never really going to solve anything. The disturbances in my life and the upset, the disease I created with drinking, it's no one's responsibility, but my own."

Rumer also runs an Instagram account, Rumer Has It, which as her bio explains is a "curated collection of all of my favorite things from skincare to bedding and everything in between".

Middle sister Scout is a musician and activist. The 30-year-old had some early acting gigs but now focuses solely on music.

In October, she released the music video for her song 'Love Without Passion'.

“I’ve never worked harder on anything in my life, both internally and externally,” she wrote in a post on Instagram. “I could not be more thrilled to birth this baby into the world.”

Scout has also spoken publicly about living with addiction. These days, the musician uses her social media platform to advocate for issues she feels strongly about like racial justice and equality.

She's also in a relationship with musician Jake Miller.

The youngest of the three sisters, Tallulah, 27, is an artist and clothing designer.

In February 2020, Tallulah launched her all-inclusive clothing line, Wyllis. The ready-to-wear pieces are inspired by mental health and each garment features a tag on the inside that contains the numbers for several mental health hotlines, along with the words, "You are not alone".

During her appearance on Red Table Talk in November 2020, Tallulah opened about her struggles with alcohol and substance abuse.

"We were on family vacation," she said when discussing her first experience with alcohol. "It was champagne, it was very sweet. And then when I was 15, I almost died from alcohol poisoning."

Tallulah has also previously spoken about her relationship with her mum, sharing how they didn't speak for a few years.

"I didn’t talk to my mom for almost three years and during that shattered time this day would transport me from fragmented pieces to absolute dust," she wrote on Instagram in May 2020.

"I remember tearing up driving to work upon hearing a radio ad that cheerily recommend which ‘perfume Mom would absolutely adore’. I digested the entire celebratory nature of the day as an insensitive slight to MY pain and MY story," she continued.

"However, my story changed. Through a metamorphosis of inward self reflection and a malleability to forgive, three years did not stretch to forever. The gratitude of that truth has never lost its potency. I am magnetically transfixed by my mother, if you know me personally you know the magnitude of her presence in my life."

After three years of not speaking, when Tallulah's addiction was its peak, she moved back in with her mum and started treatment.

On May 5, 2021, Tallulah got engaged to her boyfriend, filmmaker Dillon Buss, sharing photos of the proposal (and the massive engagement ring) on Instagram.