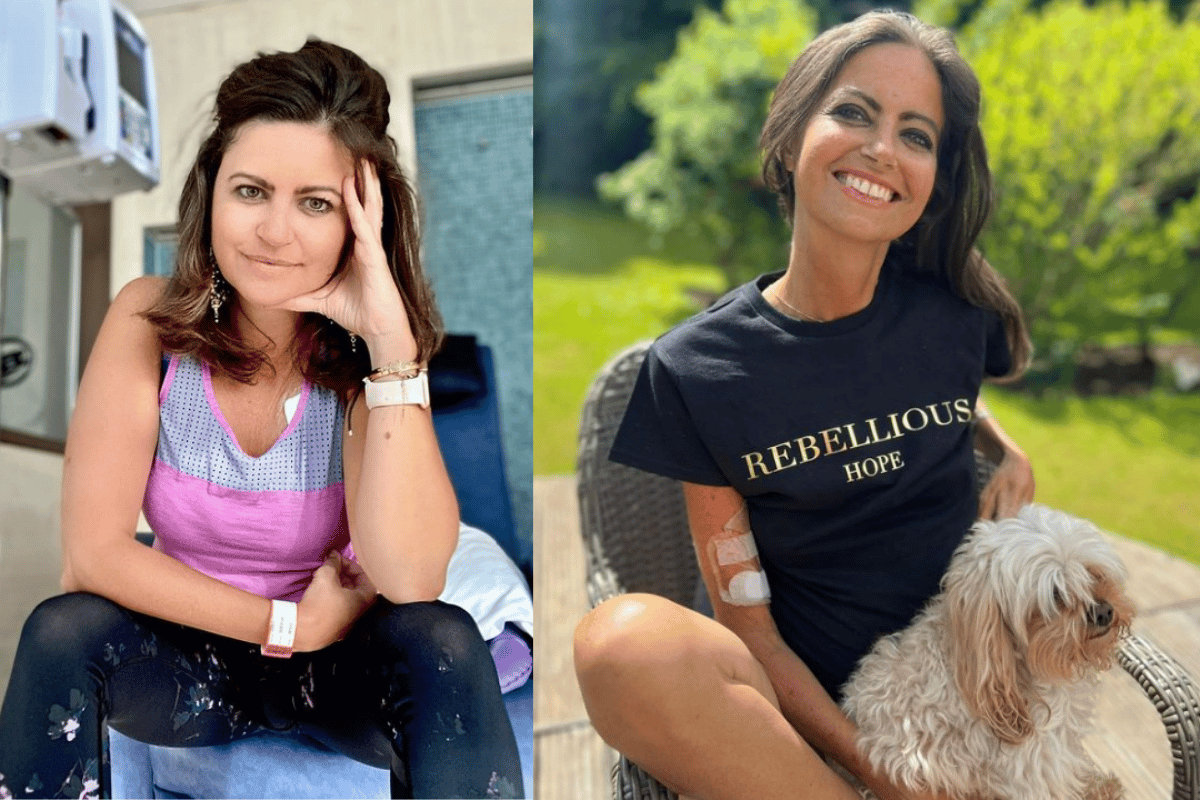 In 2016, Dame Deborah James was living her best life. She was a British 35-year-old mum of two who was fit and healthy, had been a vegetarian for 25 years and was excelling in her career as a secondary school teacher.

Then she was diagnosed with stage three bowel cancer.

Deborah immediately realised you are "never too young" to be affected by bowel cancer, because although the disease does mostly affect people of older and middle age, it can happen to people in their younger years too. In Australia, there has even been a rise in young-onset gastrointestinal cancers.

When Deborah began her chemotherapy and treatments, she started to blog about her experiences, sharing it via her website and Instagram platform @bowelbabe, as well as becoming a columnist and a BBC podcaster. Her aim was simple – to have a wider conversation about bowel health, encourage people to get regular colonoscopies and share her cancer journey.

And sadly this week, it came to an end, with Deborah's family announcing that she passed away at age 40, surrounded by loved ones.

Watch: The facts, on bowel cancer. Post continues below.

Deborah began co-presenting You, Me and the Big C alongside Lauren Mahon and BBC Radio 5 Live newsreader Rachael Bland in 2018, with the show earning praise for its frank discussion of cancer.

They spoke to celebrity guests and addressed practical matters, including hair loss, tips for dealing with finances and telling your loved ones about illnesses. Her co-host, Rachel Bland, died aged 40 in September 2018, two years after being diagnosed with breast cancer.

Deborah's first book, called F*** You Cancer: How to face the big C, live your life and still be yourself, was published in 2018. Her second book, How To Live When You Could Be Dead, is due to be released on 18 August.

Throughout the years, Deborah had tried all the treatments on the market, but unfortunately, the cancer grew and her diagnosis became terminal.

In May this year, she shared with her one million followers that this was "the message I never wanted to write".

"We have tried everything, but my body simply isn't playing ball. My active care has stopped and I am now moved to hospice at home care, with my incredible family all around me and the focus is on making sure I'm not in pain and spending time with them. Nobody knows how long I've got left, but I'm not able to walk, I'm sleeping most of the days, and most things I took for granted are pipe dreams," she wrote.

"My body just can't continue anymore. In over five years of writing about how I thought it would be my final Christmas, how I wouldn't see my 40th birthday nor see my kids go to secondary school – I never envisaged writing the one where I would actually say goodbye."

She said her last days would be spent taking things one day at a time and spending time with her husband Sebastien Bowen and two kids, Hugo and Eloise, who are young teens.

"My whole family are around me and we will dance through this together, sunbathing and laughing (I'll cry!!) at every possible moment! You are all incredible. Thank you for playing your part in my journey. No regrets. Enjoy life."

After posting this life update, Deborah also announced she had decided to launch the Bowelbabe fund, which aims to raise money for research into personalised medicine for cancer patients.

It surpassed one million pounds in less than 24 hours – smashing her initial goal of 250,000 pounds – and has now raised almost seven million pounds.

But over the next month, Deborah found it overwhelming to try and create as many memories as she possibly could in the time she had left.

As she said: "Making memories can be hard why you are dying! Oh the pressure!"

She created a fashion collection, spent time with her dog, went on a garden day trip with her husband, went to the opera, had a girl's night sleepover with the nearest and dearest women in her life and plenty of lunches and cocktails.

Listen to The Quicky: Why bowel cancer is on the rise in women. Post continues after audio.

Deborah also got to see her brother become engaged to his long-term girlfriend. She also spent the month reflecting on her incredible achievements and the impact that her podcasting and campaigning has had over the past five years.

"Small chats really can save lives, small conversations can create ripples far beyond where we might see them," she said.

And a few days later, Deborah was visited by Prince William and awarded with a Damehood for her contribution of raising awareness around bowel cancer. The Duke and Duchess of Cambridge – who donated to her research fund – praised her "tireless efforts" and thanked her for "giving hope" to those living with the disease.

"Prince William actually came to our family house today!! I am utterly honoured that he joined us for afternoon tea and champagne, where he not only spent a generous amount of time talking to my whole family but also honoured me with my Damehood," Deborah wrote on Instagram.

"It's quite surreal having a royal pop in at home, and yes, you can imagine the cleaning antics and preparation went off the scale – but it was all irrelevant because William was so kind and he put us all at ease."

On Wednesday, her family announced that Deborah had passed away peacefully surrounded by loved ones.

Describing her as an "inspiration" who they are incredibly proud of, they said by sharing her experiences, she was able to raise awareness, break down barriers and challenge taboos.

And she did exactly that. Not only in Britain, but across the globe.

Of course, conversations surrounding poo, bowels and cancer aren't sexy. But as Deborah pointed out, these conversations save lives. Because with early diagnosis and access to screening tests, bowel cancer is a treatable disease.

"We thank you for giving us time in private as a family, and we look forward to continuing Deborah’s legacy long into the future through the @bowelbabefund," her family said in their statement.

"Thank you for playing your part in her journey, you are all incredible. And a few final things from Deborah…'find a life worth enjoying; take risks; love deeply; have no regrets; and always, always have rebellious hope. And finally, check your poo – it could just save your life'."

To donate to the Bowelbabe fund, you can do so here.

For more information on bowel cancer, to order a screening kit or to donate, you can visit Bowel Cancer Australia.