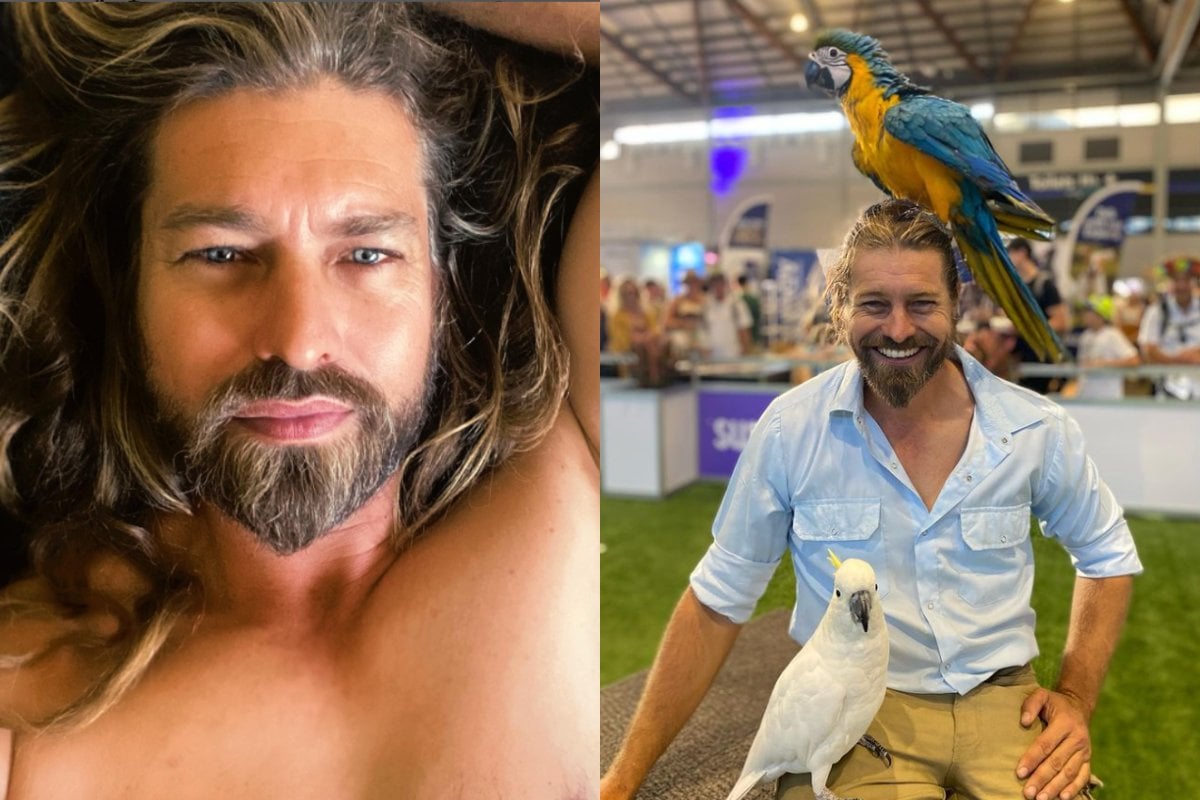 David Graham has come to an important realisation about his children, and it’s due, in a roundabout way, to COVID-19.

Graham – or Farmer Dave, as he’s better known – captured Australia’s attention in 2006 when he came out on Big Brother. Since then he’s gone on to build an international reputation as a dog trainer. He was touring the US, doing live gigs, when the pandemic hit.

“They shut down New Orleans the second day I was there,” he told Mamamia in 2020. “The day after that we got on a plane and got the hell home.”

Watch: If reality TV interviews were real. Post continues below.

Back in Australia, Graham decided to devote all his time to RuffTrack, a program for teenagers who don’t fit the school system and are “falling through the cracks”. At the beginning of the program, each teenager is paired up with a young dog, to help them learn responsibility.

“This has really brought home the need for a village to raise kids and it just goes to show how important male role models are to kids,” Graham says. “It gave me a kick up the arse, to be honest, that as a dad you’ve got to be present and you’ve got to listen.”

Graham became a donor dad for the first time six years ago. He now has four donor children. Because of his life of “pretty much living out of a suitcase”, he says he “very rarely” got to see his kids.

“Their mums will bring them to where I’m doing a show and I get to see them during the break,” he explains. “That’s not connecting with your kids and I realise that now. I need to take time out and go and spend weekends and actually hang out with them and just do whatever it is that they want to do.

“They’ve got super-loving families around them and all that sort of stuff, and I’m a donor dad so it’s a little bit different to a full-time role of a father, but a dad’s a dad.”

He would also like to have kids with a partner of his own.

“I’m one of 11. I love kids. I just love the idea that you can shape a good human. My dream would definitely be to have a dozen kids myself.”

Graham, who grew up on a farm in Queensland, made the decision to go on Big Brother after being the victim of a savage gay-bashing.

“I thought, ‘That’s not right. People shouldn’t be bashed.’”

He believes going on the show probably helped open some people’s minds.

“I think there was a part of the population that was probably like, ‘Oh, so farmers are gay as well! Maybe they’re not all just running naked at the Mardi Gras. Maybe gays are everywhere, but they’re not talking about their sexuality because they’re just living their lives.’”

When more TV work was offered to him afterwards, Graham took it, including documentaries and Dancing With The Stars. But it wasn’t because he wanted to stay on TV.

“I’m a very reluctant person in the spotlight,” he explains. “I prefer my own company and I prefer being on a farm. Back then it was the Millennium drought, so I did whatever I needed to do to pay for stock feed and then I just went back to the farm.

“Dancing With The Stars was holus-bolus to pay for a big stock feed bill that I had.”

These days, Graham lives a relatively private life away from the spotlight.

In 2020, the father-of-four recently shared a photo of himself rocking a full beard while relaxing in a tub on Instagram.

"Merry Christmas... from a bloke in a sheep trough who is just so content with his life, so happy yet so exhausted with 2020 coming to a close...here is cheers to you Baby Jesus!" he captioned the post.

It’s only now, more than a decade after appearing on Big Brother, that Graham is finally watching his season.

“I did try to watch it with my partner at the time but he’d lived through it from the other side and he was like, ‘I just can’t relive this,’ so we didn’t watch it,” he says. “Fourteen years have passed and a friend sent me a link to the whole series on YouTube. I’ve been doing podcasts and stuff with other housemates and it triggered a lot of memories, so I started watching last week.”

Graham says coming out on the show was “such an emotional, huge part of my experience”, but he can’t actually remember it.