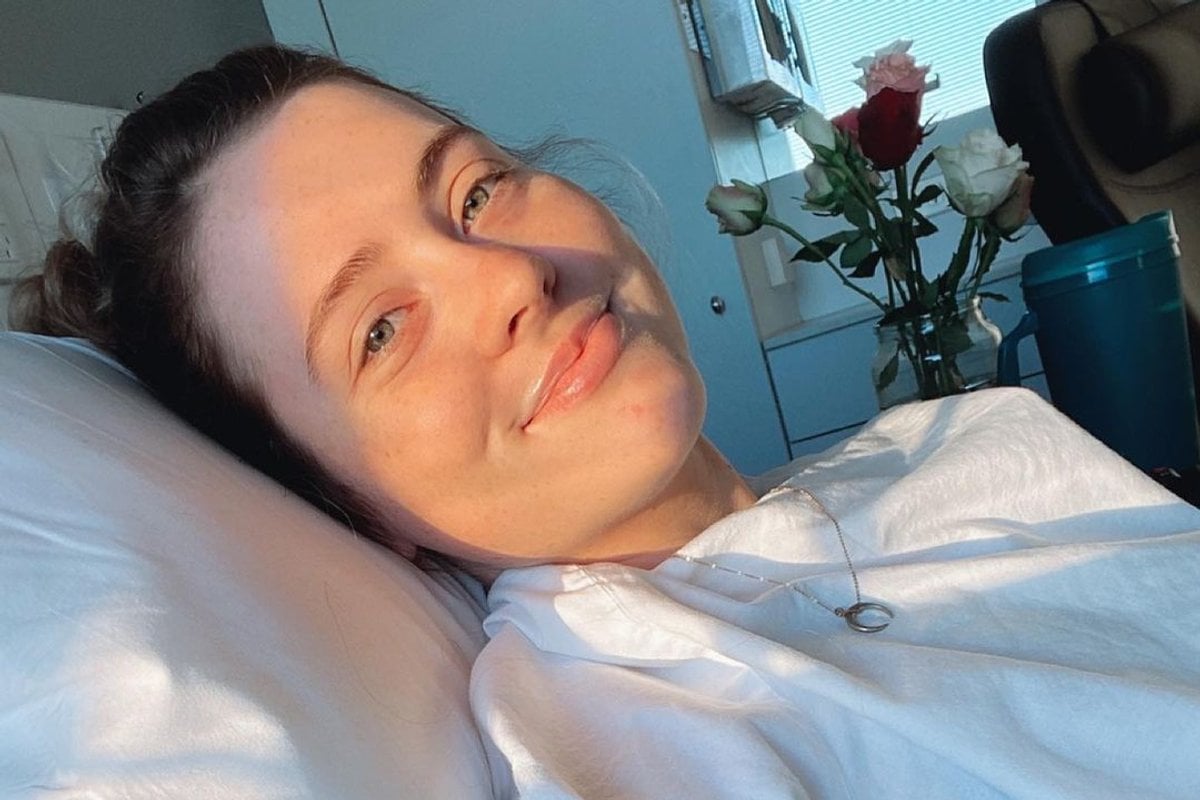 Last year, I started experiencing pain in my left hip.

It was the kind of pain that made me think I’d put my back out at the gym so I thought I’d just need to take a few days off to recover.

I took those days off but then my right hip stiffened and the pain was unfamiliar.

Watch: The seven health myths you should ignore. Post continues below.

Whenever I made the slightest movement, I felt a sharp, stabbing pain. I couldn’t walk. Picture your favourite local 95-year-old and then slow the pace down by 50 per cent.

A couple of days later, the pain moved to my right shoulder.

I woke up at 4am screaming in pain. Somehow I managed to call an Uber to take myself to hospital, where I explained I couldn't move my legs and my shoulder. They asked me if I’d been in a car accident or any other kind of full-body trauma...

"No, not to my knowledge," I told them, so they put me in a sling and explained that I had a wry neck. You know when you sleep a bit funny and your neck gets stuck? Yeah. That. I knew that couldn’t be the case because it didn’t explain my hips, but I was given some pain meds and off I went. Back to bed.

I was now essentially immobile and in a pain that I can’t quite explain. I’d give it a 9.5/10, just in case childbirth is the 10/10 I haven’t yet experienced.

Listen to The Undone, a podcast about navigating the "adult" world without a GPS, friendship, love, sex, personal politics, and... air fryers. Post continues below.

My dad is a physio, and like all the other experts, he was perplexed by my current situation.

He arranged for me to see an excellent specialist, who ordered a blood test at 9am. At 1.30pm I received a phone call informing me I had to go to hospital immediately. I was at work but my mum was already downstairs with my bags packed.

While the cause was still a mystery, I had to go to hospital to be screened for just about everything. I was poked and prodded for days while they ran tests and eventually I was introduced to a rheumatologist who diagnosed me with Autoimmune Inflammatory Arthritis. Specifically, Palindromic Rheumatism - a rare form of arthritis that causes my immune system to see my joints as a threat. It flares up periodically, then disappears, leaving no lasting damage to the joints, but the episodes are unbelievably painful, and in my case, last for weeks on end.

The next few months were a mixture of immunosuppressant medication, a heavily restricted diet that was specific to my inflammatory response, slow movement and tears. So many tears.

I was furious. The month before I ran 80km and now I was immobile with a rare diagnosis that offered no explanation or long-term forecast.

But I kept on keeping on and within a few months, I had established a new normal.

At the time, I was single, and prior to my diagnosis, I was loving it. Casually dating and thriving in my single-gal-in-the-city status.

And when the time came to go on dates with my hospital matches, I found myself with a new set of obstacles to navigate.

Everything I knew about dating went out the window. Any kind of activity-based date was off the table; I couldn’t drink because the medication I was on would give me stomach ulcers when mixed with alcohol... so no cocktail dates. I was on immunosuppressant medication, meaning my immune system was already compromised. We were in the middle of a pandemic and I was considered high risk. So there was not a whole lot of room for spontaneous intimacy.

So what did I do? Or what could I do? Well, I became a regular at my local park which quickly became my go-to date spot. I had a picnic rug I would take down and meet eligible bachelors for a coffee early in the morning.

I had to be pretty upfront about my autoimmune disease because I couldn’t eat certain foods, which always leads to questioning. "Are you lactose intolerant? Coeliac?" Nah, just have this rare disease. Sexy.

Before every date, I sent a disclaimer text. I’d ask them as informally as I possibly could if they had any cold or flu symptoms. I was basically a walking QR code declaration form.

Provided they had no symptoms, we would go on a date. And if it went well, there would be a moment where I could tell they were going to kiss me. I’d get this unsettling feeling in my stomach - what if they’re sick? What if they make me sick? Really hot and definitely not a mood killer.

It became even more pressing when it came to sex. I was on high alert for any kind of infection. Whether it be a sniffle or an STI, I had to take my health more seriously than I ever had before.

I also couldn't move like I used to - perform, if you will - due to my joints, and my confidence was pretty shattered at times. But I just tried to do my best. That’s the spirit, right? Right.

Most people were immediately freaked out by the sanitised dating experience I was offering up, and I understood.

It’s certainly not very typical and my personal health is a pretty weighty responsibility to ask someone to undertake just for a casual date. There were plenty of other fish in the sea with far fewer criteria.

But in December, I started talking to someone. Our scheduled first date was cancelled because of a COVID outbreak, and then he was going on holiday for three weeks over Christmas. I was pretty confident that this would be the undoing of our Hinge match potential, but much to my surprise and delight, he FaceTimed me every other day while he was away.

He knew everything about my autoimmune disease and didn’t seem to be fazed by it. I could tell he recognised the seriousness and the responsibility of dating me, but it didn’t scare him off, unlike the others before him.

We ended up meeting up and completely hitting it off. He told me he was in good health before we met; I didn't even have to ask. He took my dietary requirements seriously on our first date and we shared a gluten-free, dairy-free, seasoning-free pizza. A sacrifice that I appreciated because I’m sure he, like most people, would have preferred cheese on his pizza.

We had a second date, a third, fourth, fifth... you get it. Things were going well.

We’d been dating for a couple of months and we were starting to get comfortable but it was still very new, so of course that's when I had a flare-up. And it was a different kind of flare-up.

I broke out in upwards of 10 sores on my lips. I immediately went to my doctor who was like... yeah, this might be herpes.

I told her I hadn’t kissed anyone but the guy I was dating, but the doctor explained that because of my compromised immune system, even if he had never had a cold sore or any other herpes outbreak, he could have passed on a dormant virus.

I was in so much pain I couldn’t talk. I was up crying every night waiting for my blood test and swab to come back.

I had to ask this guy I had just started dating whether he had herpes because I currently had sores all over my lips and looked like I had the worst botched lip filler job of all time.

I was calling my doctor every hour on the hour, until the call finally came through. I had a negative result. It was not herpes. Relief ran through me, but it still didn’t help with the problem at large.

Turns out that because of my immunosuppressant medication, I had a photosensitive reaction. I was allergic to the sun. Um... this was not in the manual.

Some other unsexy and very visible symptoms of my flare-ups included cuts in the corners of my mouth that take weeks to go away and big cystic pimples that stay around for over three months.

These are the kind of things that make me feel entirely unsexy, and having met other women now with similar autoimmune diseases, unsexy seems to be a pretty common theme when dating.

I’ve now been dating this guy for just shy of four months, which I never really saw coming.

I was committed to single life, and I told him when we met that it was strictly casual, as all of my encounters had been for the past little while.

But there’s something to be said about someone making you feel loved at times when you feel completely unlovable.

There might not have been quite as much mystery and intrigue as the start of other relationships, but it certainly brought us closer together, in the most unexpected way.