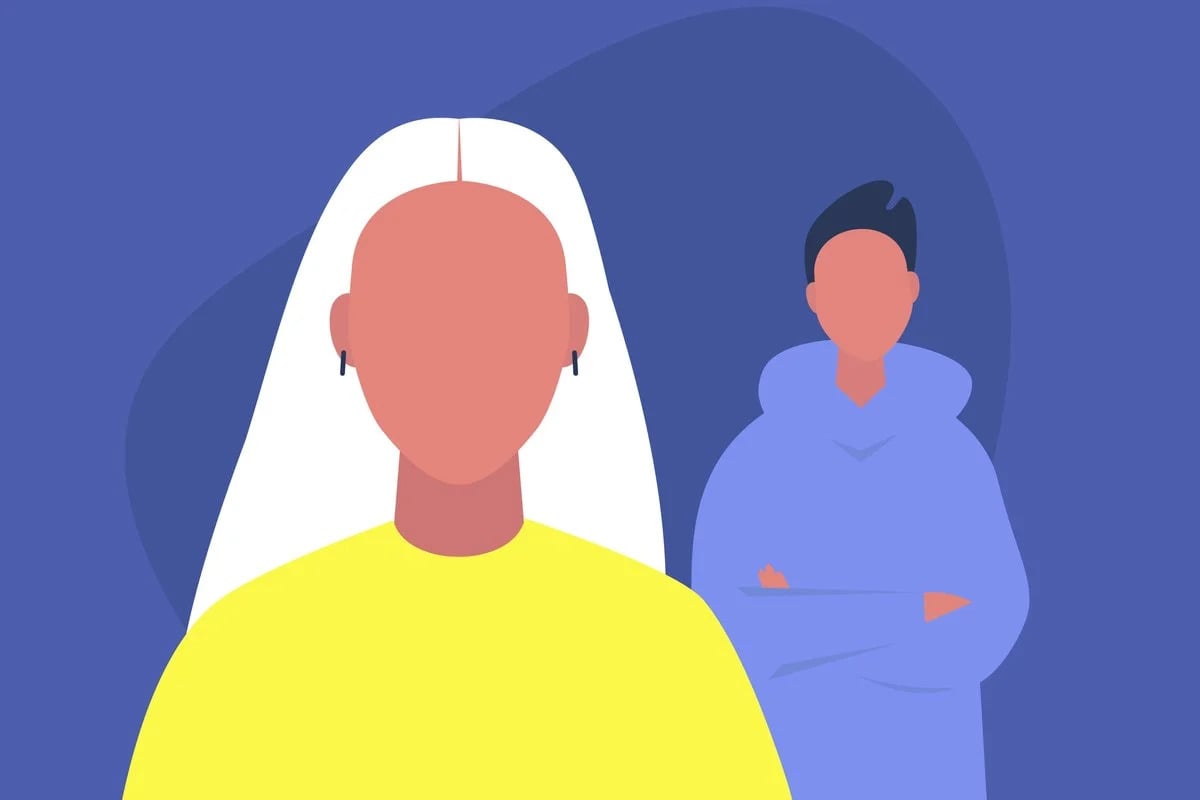 Every girl has that friend. You know the one. She's forever stuck in a spinning wheel of dating the 'bad guy'. The kind of person who seems to be covered in red flags.

Yet, for some strange reason, it seems like it's just her... type. Right?

As it turns out, the allure of always going for the 'bad guy' might not be as clear-cut as you might think.

We reached out to psychologist Nancy Sokarno from Lysn to find out more about the 'good guy' versus 'bad guy' mentality, and what we might want to reconsider.

For the purposes of this article, we're using the term 'bad guy' for all genders and gender expressions. Because yes - a 'bad guy' can be anyone.

Why do we categorise 'good guys' versus 'bad guys'?

"I think it’s a really nuanced topic because it depends on personal morals, ethics, experiences, how we treat ourselves and ultimately what we’re willing to put up with," explains Sokarno.

That, and pop culture is also undeniably obsessed with the whole battle between 'good' and 'evil' - which Sokarno said becomes a massive player in how we perceive people.

Just think of all the movies you've watched with a superhero and romance narrative - they almost always portray the typical ‘good guy’ and ‘bad guy’ characters.

When it comes to what makes people... jerks, Sokarno said 'bad guys' are not actually always terrible people.

In fact, oftentimes we have a misconception that someone has to be one or the other - which isn't necessarily the case. It's a little more complex than that.

"There are definitely bad people out there, but I don’t think it’s that black and white," said Sokarno.

"The way someone behaves can be due to their personality, but most of the time it really comes down to how they respond to a specific situation given their circumstances at the time," she explains.

"This shouldn’t excuse anyone’s bad behaviour but there are certainly scenarios where someone might behave different due to what’s going on."

She said this can sometimes lead someone to be tarnished with the ‘bad guy’ label - even if it's not necessarily true.

"Just think about the way you might behave when you’re running late and someone cuts you off in traffic – perhaps you might display traits of road rage or vent your frustration to that driver when if you weren’t running late, you may have just let it slide."

"What is currently happening in your life will sometimes affect how you treat someone and while that isn’t an excuse, it can certainly make you appear like the bad guy from time to time (even if it isn’t inherently so)."

"I also think there can be other dynamics at play as well – we’ve all heard or seen stories of those typical ‘bad guys’ who met a specific girl and changed their ways or seemingly turned into a ‘good guy’."

What does it mean if you always go for the 'bad guy'?

So, what does it mean if you always end up with these kinds of guys? Does it mean they're just your 'type'?

According to Sokarno, our attraction to a 'bad guy' can sometimes be a reflection of our own personal narratives.

"We don’t want to get into a habit of victim-blaming or blaming ourselves for someone else’s behaviour, but we can sometimes play a role in it," said Sokarno.

"For example, there are some women who seem to end up dating a ‘bad guy’ time and time again and whenever they seemingly meet a ‘good guy’, they’re not interested."

"This could be because they’re attracted to their confidence, or are looking for that adventurous spirit, or simply are going for the attractiveness rather than the personality."

Sokarno said there’s also the theory that women who have an inner rebellious spirit are attracted to people who might be able to release that out of them.

Often these kinds of rebellious qualities are repressed during childhood - particularly in women. Meaning? You may be drawn to a 'bad guy' as a way of vicariously acting on these traits.

Despite the fact that you know these kinds of qualities will make them an unsuitable partner in the long-term, Sokarno said a lot of women will feel that the potential pain is worth it.

"Stereotypically, bad guys are the 'fun’ people who might not treat you right all the time but are never boring. Some women are attracted to that but will often complain about wanting to meet someone nice (usually the kind of person that is right in front of her but she hasn’t noticed)!"

"There’s a reason there’s the saying ‘nice guys finish last’ – some women just aren’t as interested in the nice guy!"

Sokarno said empathy can sometimes play a role in this, too.

"Thanks to pop culture, almost every bad guy has some sort of traumatic backstory and could even be considered the victim."

"Some women have a need to nurture, protect, fix or ‘save’ a bad guy, and therefore tend to be more attracted to - and often excuse - their bad guy behaviour."

She adds, "In general, I think women can want to see the good in everyone so it can be very easy to see the potential in a bad guy."

"There’s also a challenge in trying to tame the bad guy and get them to fall for you (some women enjoy the thrill of that chase)."

Reply
Upvote
Sometimes we attract someone who resonates with the way we feel about ourselves.
If we feel undeserving of real love we can accept someone who treats us less the good enough. It feels normal because we get to reconnect with the disowned parts of ourselves. It is our relationship that stirs up the unhealed aspects of ourselves.
https://www.counsellingservicemelbourne.com.au/
News
General
Opinion
True Crime
Politics
Sport
Explainer
Entertainment
Celebrity
Reality TV
Movies
TV
Books
Rogue
Royal
Lifestyle
Beauty
Fashion
Weddings
Home
Wellness
Health
Fitness
Travel
Food
Parents
Before The Bump
Pregnancy
Baby
Kids
Teens
School
Parent Opinion
Work & Money
Money
Finance
Career
Lady Startup
Relationships
Sex
Dating
Separation
Friendship
Family
Real Life
Couples