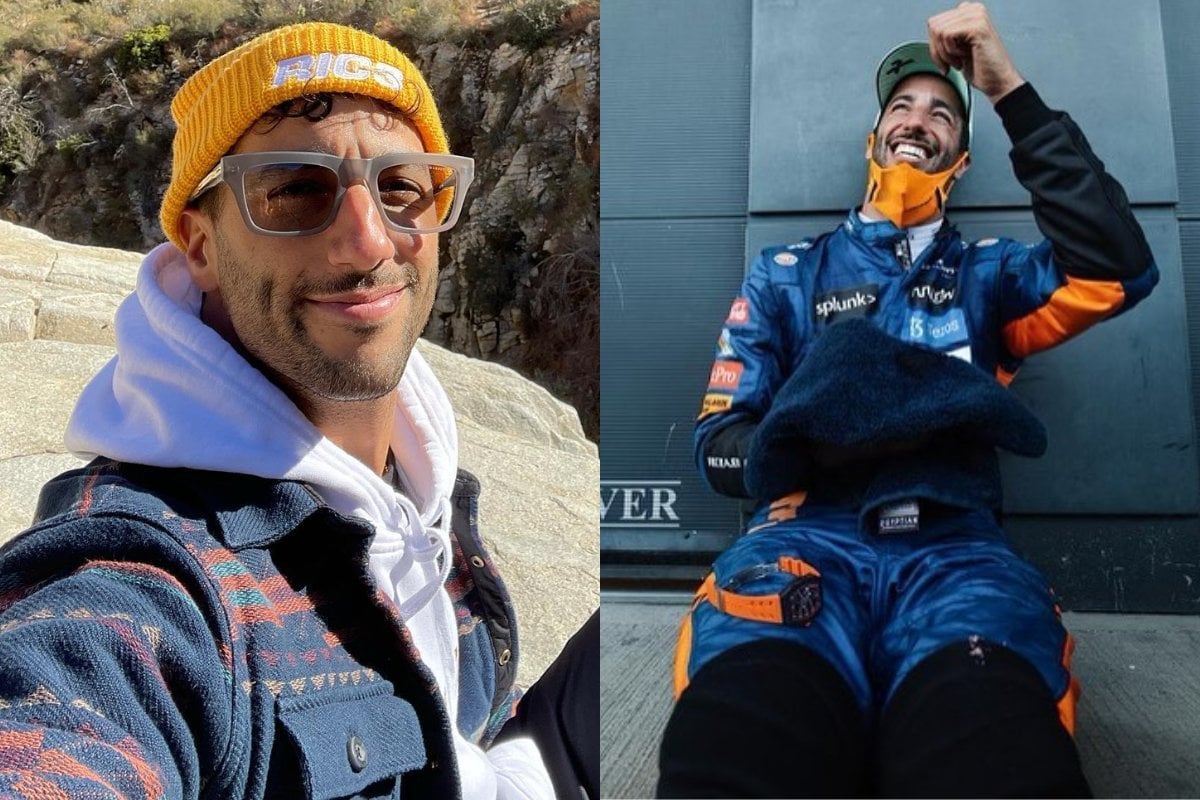 There's a very good chance the name Daniel Ricciardo is on your radar right now.

Not only is the Australian racing driver currently competing in the 2022 FIA Formula One World Drivers Championship for McLaren but he's also starring in Netflix's compelling series, Formula 1: Drive to Survive.

With the Formula One season officially starting last weekend in Bahrain and the fourth season of the docu-reality series returning, here's everything we know about the Aussie sports star.

But first, here's the trailer for Drive to Survive season four. Post continues below.

Daniel Ricciardo grew up in Perth, Western Australia, and it was his dad who got him into motorsport.

"Some weekends, I would be at a racetrack in my mum’s arms watching him, so from a very young age, I was exposed to the speed, sound and the smell."

His first experience behind the steering wheel was at an indoor kart track.

"The first thing I thought was just, 'This is freedom,'" he said.

"At seven or eight years old, I was in total control: 'No one can touch me. I am literally free right now.'

Uninterested in school during his final years, Ricciardo focused his attention on racing and entered professional single seater, open-wheel races.

"I was quite immature at school," he told the publication. "I got to 17, and something just clicked – I fully committed to it."

Ricciardo made his track debut behind the wheel of a Formula 1 car when he tested for Red Bull Racing at the young driver's test in 2009.

He was promoted to their F1 team in 2014 and scored three wins in his first year at the top team, before moving to Renault in 2019 and eventually joining McLaren in 2021.

He admits it's the competition that drives him.

"I am what you see. If I am smiling and laughing, then it is me having a good time and I truly do love and enjoy this, but anything with competition I turn pretty quickly," Ricciardo told The Guardian.

"I was playing Monopoly and Uno over Christmas and I was getting pretty agitated. Anything with competition I change, that’s part of me when something is on the line."

"I don’t really block out the nerves. I choose to use the nerves as something positive. I use it as excitement. I use it as a form of energy," he told Man of Many.

"Music and stuff on the grid will keep me calm, so perhaps that is a way to block out some of the nerves, but I try not to completely shut it out as it provides you with a bit of adrenaline.

"On track, I wouldn’t say I feel nervous once the race is underway. It’s then just focus and excitement."

Returning for its fourth season, Ricciardo admits Drive to Survive has brought in a whole new audience.

"The show did wonders for the sport," Ricciardo told GQ.

Read more: 'I never cared about Formula One. Then I watched Drive To Survive.'

Speaking to Ellen DeGeneres, the racing driver explained the show also changed people's perception on just how hard the sport can be.

"It’s intense," he told the talk show host. "You’re right, a lot of people say, 'Well why do you need to be fit? I drive my car to work every day and it’s a breeze.'

"The races are 90 minutes long... there’s what [we] call G-forces and because we corner so fast, there’s like four or five Gs on our body, and that is a force which is trying to basically pull us out of the car.

"So we need a lot of core strength and neck strength to basically just hold on. And we can lose up to between eight to 10 pounds (3.5-4.5kg) in a race."

Outside the sport, the 32-year-old is focusing more on family these days after years of putting F1 first.

"I think anyone who’s really chasing a dream, or chasing—sorry if this is a cliched word—greatness, you do put yourself first and you shut things out, you shut out family, and you become engulfed in your own stuff," he told Esquire Middle East last year.

"I think I’ve been selfish in some things for quite a few years. I’m consciously just trying not to be any more selfish that I need to be. I’ll use it for the competitiveness that I need, but I don’t want that to spill into my everyday life.

"Ten years ago, Formula One was everything. Without Formula One, life didn’t exist. Now, there’s other things which hold a lot of value to me."

Ricciardo was previously in a long-term relationship with his high school sweetheart Jemma Boskovic until 2016.

Most recently, he was linked to American actor Heidi Berger, the daughter of former McLaren driver Gerhard Berger. .