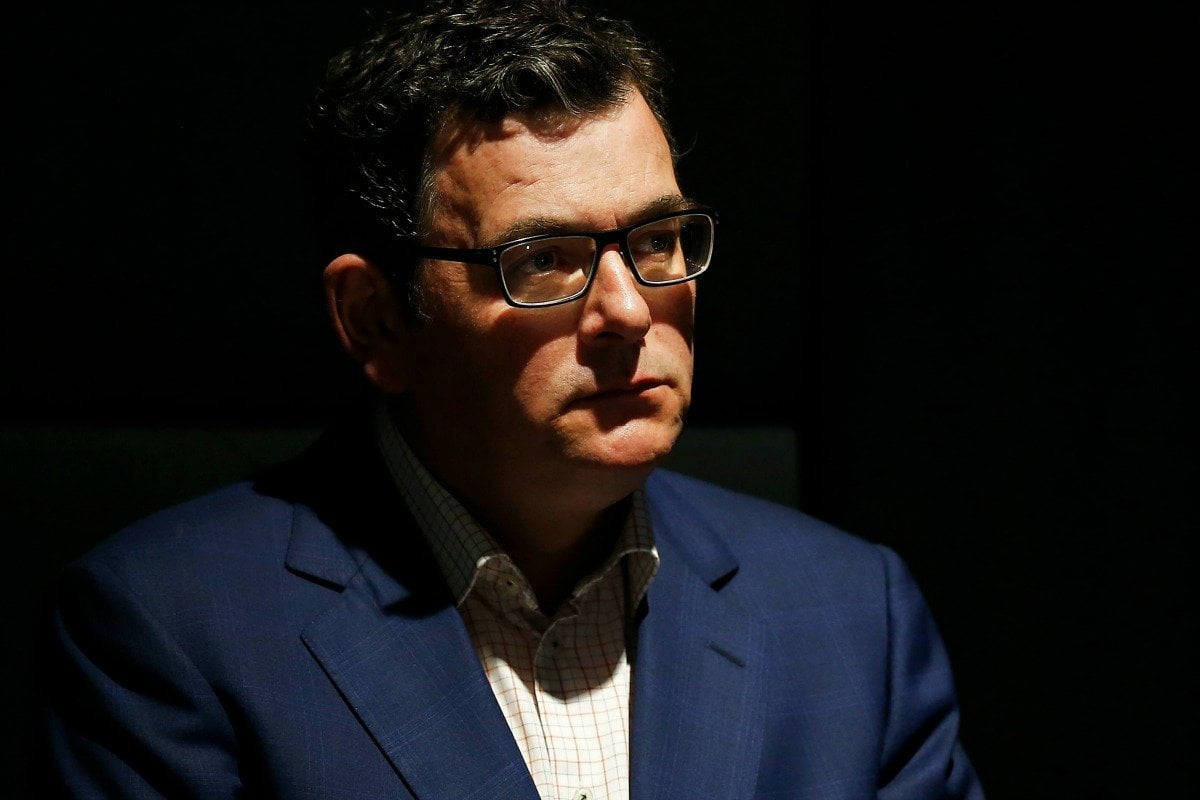 That's how jovial 'zero case days' have become. How celebratory and commonplace the daily update, when compared to the devastating reality of only a few months ago.

We're only just starting to comprehend the damage one of the harshest lockdowns in the world had on the mental health and livelihoods of the millions that call the southern state home. But there's no denying that it also saved hundreds, if not thousands of lives.

For the last five months, one man has shouldered the brunt of the country's criticism as the state blindly fought its way through an emergency being fought the world over, using a tactic torn apart by the masses.

Watch: As the lockdown stretched on, Victorians started to lose patience.

And yet as the cries of 'Dictator Dan' grew louder, Daniel Andrews stood up every single day, for five months straight, and stood his ground. Determined to push forward with his controversial approach.

In recent months, as The Age reports, there have been almost as many mentions of the name 'Daniel Andrews' as that of 'Scott Morrison' in the public discourse, as the entire country watched him fight, sometimes seemingly alone, for what his government thought would get them through the coronavirus storm.

In daily press conferences, the exhausted premier would field questions designed to trip him up and create 'gotcha moments' that media organisations could transform into juicy headlines to feed a public hungry for news. It was his government, after all, that is also being investigated for the bungled hotel quarantine scheme that landed them in their COVID-19 mess in the first place.

Then he'd spend the rest of the day getting pressure from above, with the prime minister and his government publicly expressing "profound disappointment" in the state's decisions.

With so many families and businesses affected by the Victorian lockdown which has seen the loss of more than 1,000 jobs per day, we strongly encourage the VIC Govt to reopen in a COVID-safe way.

And from the side, with Victorian Opposition Leader Michael O'Brien and Liberal MP Tim Smith throwing punch after punch with cries of "friendless loser," "control freak" and "loony."

9 months ago today Victoria recorded its first case of COVID-19.

9 months is how long Labor has had to fix contact tracing and testing.

9 months later and we are locked up because Andrews still hasn’t fixed it.

Victorians are paying a shocking price for Labor’s incompetence.

As the weeks turned into months, and Victorians grew restless, anger at Andrews only grew with the state divided into #IStandWithDan supporters and anti-Dan detractors. Even those in support started questioning their faith in their leader as they got weary from a life lived in captivity.

Read: 120 consecutive days at work with 3 kids at home: Everything we know about Dan Andrews.

And yet while the country was quick to hold Andrews up as the sole 'dictator' through Victoria's fight, now that the war has been won he barely rates a mention.

Today, as the coronavirus crisis accelerates in Europe and America, Victoria's "zero new cases" has become the envy of the world.

On August 5, Victoria had 533 daily new cases, and Italy had 384. By September the Italians had tripled those numbers and in November they're recording more than 30,000 new cases some days. They're consistently also announcing more than 500 new deaths every 24 hours as the country scrambles to keep up with a virus running rampant.

“The adrenaline we felt from the first wave has been replaced by exhaustion and anger.”

Italy’s doctors were praised for their COVID-19 response in the spring. Now they are burning out https://t.co/bq6n8nU8yJ

By way of comparison, Victoria celebrated "elimination day" on Friday, after successfully surpassing two whole incubation periods with not a single new case. It was decided that the state had effectively eliminated the virus altogether, surpassing even its own benchmarks.

It was Victorians that did this of course. They sacrificed their sanity and their lives. They home schooled, and watched their businesses wither away. They were the ones that suffered, and the ones responsible for killing the virus by staying in and staying home.

But they were also led by a leader who refused to bow to pressure. A leader who played the 'bad guy' in the hope of a happy ending.

Only now that happy ending is here, he's been punted to the background as celebrations take centre stage.

According to an October Roy Morgan survey, 71 per cent of Victorians approve of the way Andrews handled his job, but if you've been watching the political, social and public conversation over the last 31 days there's been a subtle steering away from any praise of the premier.

Political colleagues and media commentators are happy to thank the state for their hard won fight. But you'll be hard pressed to find many willing to single out the man who got them there.

Delighted that Australia goes into the weekend with a further day of zero community transmission nationwide - on the advice just received from the National Incident Centre. A special thanks today to our doctors and nurses for their courage, leadership & service this year.

Ridiculous the Victorian public service is still working from home, they should be leading by example, get back to the office and help the CBD get back on its feet.

We really need to debrief on why so many loud voices were factually incorrect about the possibility of achieving this, and why those voices have not really suffered any consequences for being so persistently wrong https://t.co/LINV2TsxGp

The Andrews government's approach should be held up to the light and examined. It wasn't perfect, and it had severe and potentially deadly downsides.

But there will be more chairs around the table in Victoria for Christmas lunch this year thanks to the elimination of the virus in the Victorian community.

Thankfully, we don't have to witness what might've happened if Andrews had taken a more relaxed approach like that of our European counterparts.

The least his detractors could do is give credit where credit is due.

C
caitorob a year ago

Reply
Upvote
Totally agree with this article. And there were certain areas of the press fixated on elements like “who chose private security “ when every single state had private security. WA had the exact same set up until August. Recently with the rebooted HQ ADF have AGAIN said that they will not guard guests (it was never on the table) It’s all dirty politics and distracted from the real issues. 700 deaths in private aged care and there has been a Royal Commission that has found the FEDERAL GOVERNMENT responsible. Yet NO CHANGES HAVE BEEN MADE
S
sarah a year ago

Reply
Upvote
2 upvotes
You forgot to mention the lies, cover up and collective forgetfulness in relation to the hotel quarantine. Andrews other major mistake was that the contract tracing system was terrible, until late September when he sent his staff to NSW to learn how todo it properly. Everyone in Victoria suffered so much due to the recklessness of Andrews. He is definitely not a hero.
R
random dude a year ago