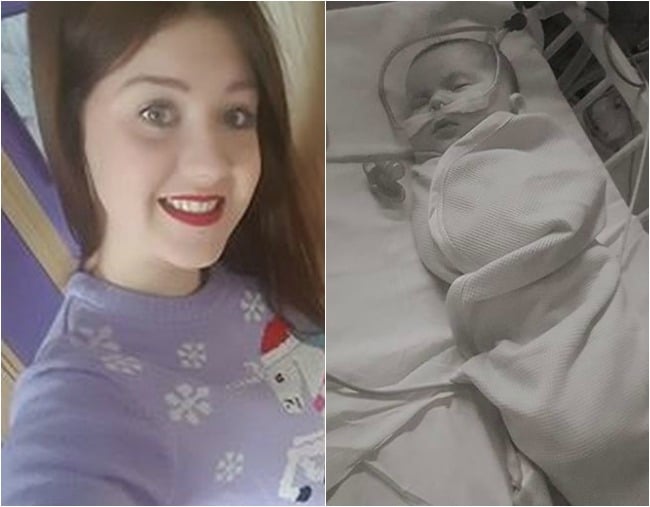 Beth Fosters’s six-week-old daughter Myah had a cough, watery eyes and was exhibiting all the symptoms of the cold.

Hours later, baby Myah was struggling to breathe and being rushed to hospital, where she’s currently hooked up to machines helping her to breathe.

So how does a simple cold become so dangerous, so quickly?

Well, what the UK mum didn't know at first, and what she's now warning other parents to look out for, is that her daughter didn't have a common cold at all, but a viral infection called bronchiolitis.

Bronchiolitis occurs when the bronchi or bronchioles (airways) in a young child or infant's lungs become inflamed. It is almost always caused by a virus - and like cold and flu viruses - is more likely to be spread and caught in winter.

What's dangerous about the illness, which Beth soon found out, is that it starts out just like a common cold does, before it progresses.

In a Facebook post on Sunday, Beth, from Stourbridge, two hours south of Manchester, said the experience was terrifying.

"Myah was using muscles in her tummy to help her to breath that she shouldn't even be using to breathe," she described.

"I've never seen a baby's tummy pumping so fast fighting for the breaths, and I've never been so scared."

The mum-of-two said she first took her daughter to the doctor last Tuesday before her breathing was laboured, where she was prescribed eye drops for her "gunky eye".

"On Saturday whilst at a Christmas party she had a coughing fit and her face turned purple for around 15 seconds," she said

Rushing to an out-of-hours clinic and then hospital, Beth's daughter was quickly put on oxygen.

"We had no clue how serious this all was until that point."

"She's six weeks old today, and we're looking at anything between three and seven days in hospital hooked up to lots of machines, on the high dependency unit in the children's ward, on oxygen, feeding tubes and having to be sedated just to get some sleep."

"There is nothing more heartbreaking."

Listen: Mia Freedman speaks with Bec Craven, a model whose cold symptoms turned out to be something far more serious. (Post continues.)


The young mum wanted to warn others to take their child to be checked at a doctor's office "even if your baby has a slight cough or cold".

"Parents with baby/small children. Please be aware of bronchiolitis this winter, its so easily missed and so bloody dangerous."

"It starts with just a simple cough and cold and can turn to so much more within hours."

According to the Royal Children's Hospital in Melbourne, medicines do not usually help babies with bronchiolitis and instead parents are urged to keep their child hydrated and feed little and often.

However, if the child has difficulty breathing or feeding, is wheezing, or is becoming pale or blue, they should be taken to the nearest doctor or hospital immediately.