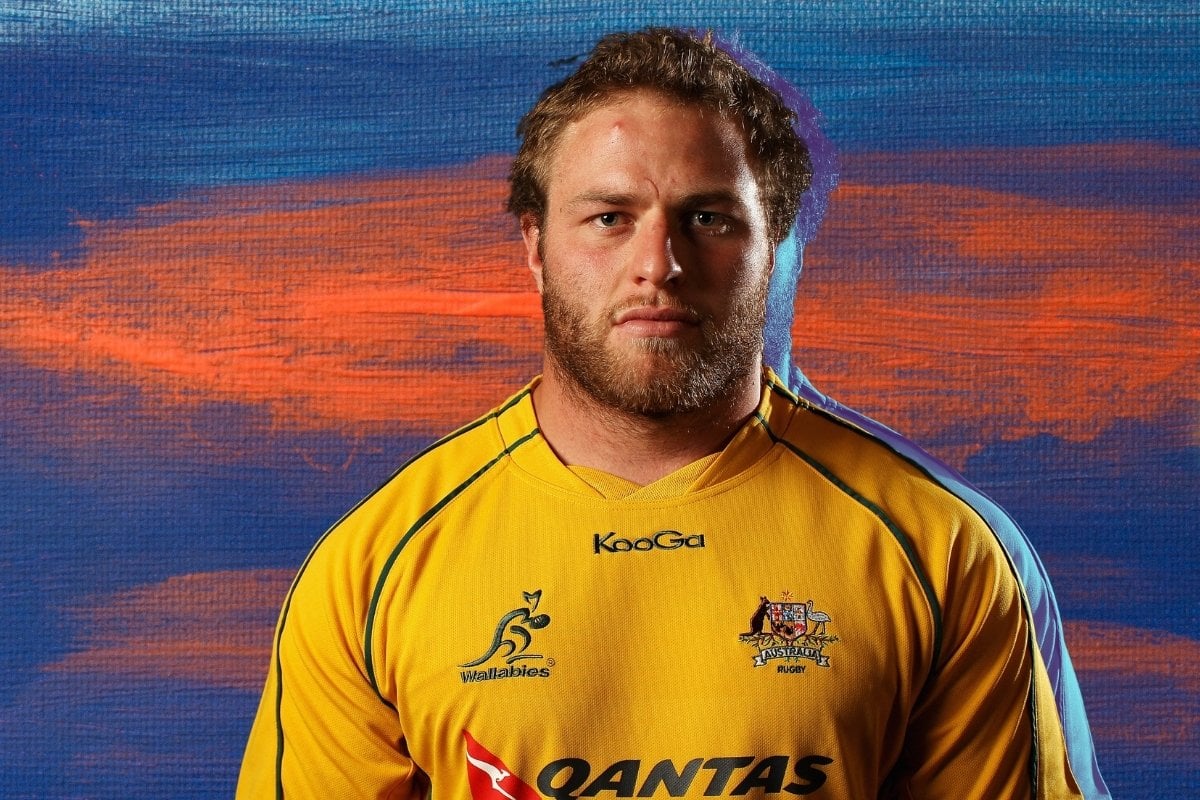 Wake up, scroll the news on my phone, skip over the sports stories.

My thumb stopped at a headline I didn't expect to see.

"My own death felt preferable to anyone discovering I was gay."

Former Wallabies player Dan Palmer (whom admittedly I hadn't heard of before because of my sports-skipping tendencies), had written a powerful 'coming out' piece in the Sydney Morning Herald.

Palmer made international headlines for becoming only the second male rugby union professional in the world, after Welsh player Gareth Thomas, to come out as gay.

Despite an enviable rugby career from 2007 to 2014, including a stint for French team Grenoble, Palmer felt he was "trapped in a false narrative and could see no way out".

"Most nights, I cried myself to sleep and routinely numbed myself with a heavy cocktail of opioids," he wrote. "I fantasised about disappearing, changing my name and starting my life all over again. It is not an exaggeration to say my own death felt preferable to anybody discovering I was gay."

These words are shocking to read in 2020. We know that the majority of Australians (61 per cent in the 2017 marriage equality postal survey) are supportive of the rights of LGBTQ people to choose what they want to do with their lives. This is a clear step forward.

And yet, Palmer describes a feeling so many LGBTQ people may have felt at a particular point in time, even today.

There's a script that society lays out for you. Be a good heterosexual and don't disturb the peace. Act like a man or woman. Don't be too effeminate in school, if you're a boy. Don't be too masculine, if you're a girl. Act like you're 'normal'. Disguise yourself if you're not. Don't embarrass the family. Don't embarrass yourself. Get engaged, get married, buy a house with a white picket fence, have kids, and 'fit in' with the local community.

Much of the above sounds old-fashioned, but there are hangovers of these social mores that are still alive today. It takes work to unshackle yourself of that shame of being different. Once you come out the other side, you realise you're the writer of your own script – one that's true to who you are.

You can be as masculine or feminine as you like. You can have kids, you can choose not to. You can be yourself.

This is why a public figure coming out is still a story, and one worth celebrating. It's about changing a narrative of shame, so others don't have to feel it. So young people don't feel the need to hide or hate themselves when they hear the words of another former rugby player, Israel Folau.

Palmer writes the Folau's homophobic views are the exception, not the rule. It does not make them any less hurtful.

He writes: "To me, what is more important than the damage he has caused rugby is the deep impact he has undoubtedly had on kids who looked up to him, and who struggle every day with understanding their sexuality."

It was not just the pressure of being a renowned rugby player that delayed Palmer's coming out. Coming out is a deeply personal and complex process that involves untangling one's self from a web of shame – shame from not being cut from what you perceive as the 'right' cloth. Add in all kinds of factors like family, culture, religion, career, a view of needing to be a 'certain person' – and you have a cocktail of reasons that can push someone further into the closet.

Research has shown that LGBTI Australians are one of the highest-risk communities for mental health and suicidal behaviours. According to the National LGBTI Health Alliance's latest report from February 2020, compared to the general population, LGBTI young people aged 16 to 27 are five times more likely to attempt suicide than the general population. Transgender people aged 18 and over are nearly 11 times more likely.

The primary causes are related to stigma, bullying, prejudice, discrimination and abuse on the basis of sexuality. And these issues are even more pronounced within Aboriginal and Torres Strait Islander communities, people with linguistic or culturally diverse backgrounds, people with disabilities, and those living in rural and remote areas.

In the arena of sports, such a significant part of Australian life, these issues often rise to the surface.

According to not-for-profit NSW health body ACON, who run the Pride in Sport Australia program to encourage greater inclusion of athletes of gender and sexual diversity, staying closeted on the sports field starts at a grassroots level.

"We know that 87 per cent of gay men remain completely or partially in the closet while playing youth sport in Australia," Pride in Sport’s national program manager Beau Newell tells Mamamia.

"The reason for that is many fear discrimination from coaches, other players, and officials, and a legacy that some sporting codes may have of being perceived as unwelcoming spaces for LGBTQ people. By comparison, 55 per cent of people in the workplace/corporate environments have concerns about being openly LGBTQ.

"A lack of openly gay or bi men in Australian sport, or other LGBTQ community members, goes to show there’s a culture shift that is required in all sports."

It's hard to believe this is still the case, 25 years after Ian Roberts became the first rugby league player in the world to come out as gay. Very few have followed suit (most notably Britain's Keegan Hirst in 2015).

This is why role models are so important. We see more Australian sportswomen who are out and proud than we do men, from Moana Hope (AFLW) to Sam Kerr (captain of the Matildas) to rugby players Karina Brown and Vanessa Foliaki. In 2018, Brown and Foliaki's post-State of Origin kiss angered some vocal NRL fans on social media.

What that moment really revealed, however, was a groundswell of overwhelming support from the wider community.

Moana Hope talks to Mia Freedman about her inspirational career, her love for her sister Livinia, and her relationship with Isabella Carlstrom. Post continues below.

There is an even farther way to go for trans sportspeople. In September 2020, ACON worked with eight key Australian sports federations to develop national guidelines for trans and gender-diverse inclusion in competition. Rugby Australia, Tennis Australia, Netball Australia and the AFL are among those committing to greater inclusion.

It's an important step for Australian rugby. And yet, last month, World Rugby became the first international sports governing body to ban transgender women from competing in global competitions like the Olympics and women's Rugby World Cup.

As long as these mixed messages come through on a global scale, it makes it harder for LGBTQ people participating in sports on a local level.

While visibility is one piece of the puzzle, Newell explains that sports organisations must "embed the work of diversity and inclusion within their day-to-day operations" to truly help their players feel comfortable as their true selves.

"We know that only 20 per cent of people who work in the Australian sporting sector believe their sport is genuinely committed LGBTQ inclusion, highlighting that sporting bodies should put more effort into LGBTQ inclusion," Newell says.

"It’s time to find out if your sport/club is truly inclusive to LGBTQ people, and what more can be done to demonstrate this than just flying a rainbow flag."

Sports is just one the key playing fields where this change can happen. We know that most LGBTQ people go on to live happier, more fulfilling lives after coming out – and this is the message that needs to be getting through, from sports fields to schools to homes.

This is why visibility is important. This is why the concept of 'pride' exists. This is why we need to reinforce to young people that coming out is never ever a fate 'worse than death'.

The freedom to be yourself – to be many things at once, and not how you feel society wants to define you – is a freedom that feels better than anything.

If you or anyone you know needs to talk, call Lifeline Australia on 13 11 14 or BeyondBlue on 1300 22 4636. BeyondBlue has a comprehensive list of helpful contacts and useful resources for LGBTI support, wherever you are in Australia.