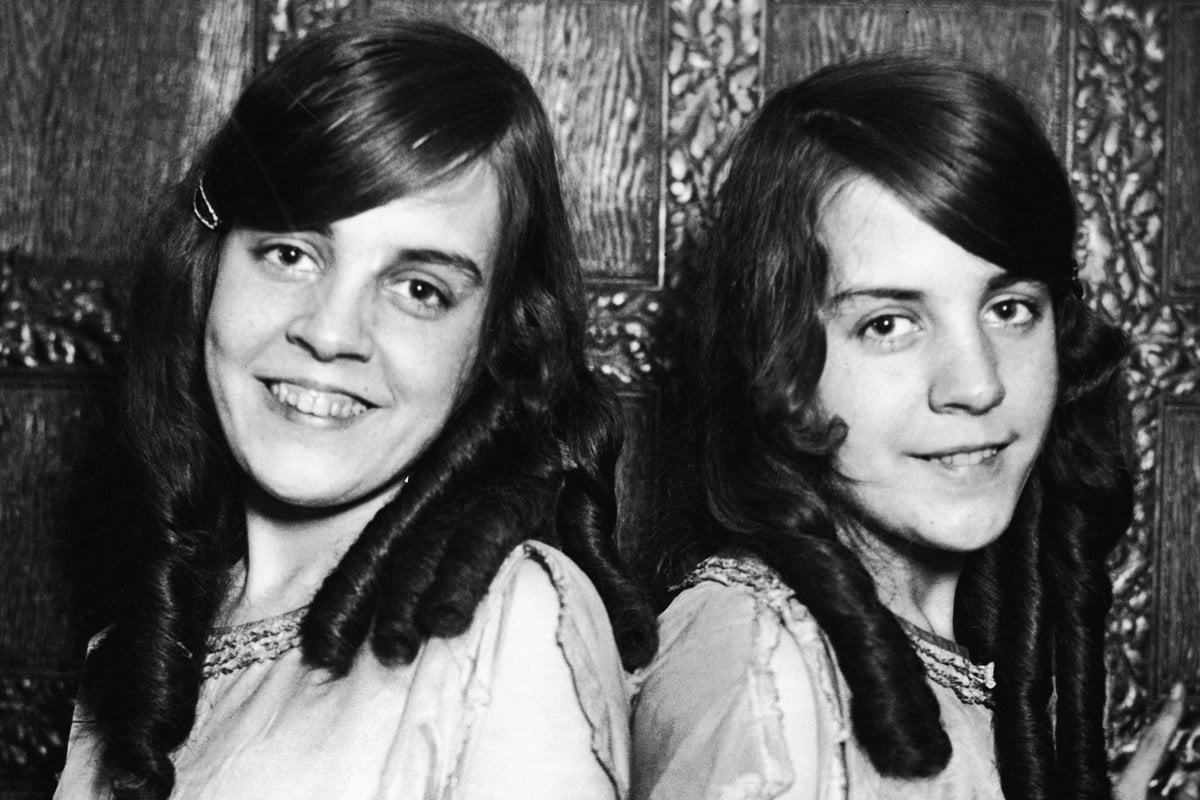 When Daisy and Violet Hilton were born in 1908, their mother, Kate Skinner, called them "monsters". Kate, an unmarried barmaid living in Brighton, England, thought the conjoined twins were her punishment for giving birth out of wedlock.

Daisy and Violet were fused at the pelvis and shared blood circulation. They were born naturally, with the nurse only realising something was unusual halfway through the birth of the first twin, when she couldn’t deliver the baby fully due to an "obstruction". Medical experts agreed that an operation to separate Violet and Daisy "would certainly result in the death of one child and probably of both".

Kate’s boss, Mary Hilton, who ran the Queen’s Arms pub, saw the twins as a money-making opportunity. She took them in, and by the time they were a few weeks old, she was exhibiting them in the window of the pub. When they got a bit bigger, she moved them to a back room, where people would pay two pennies to see them – more if they wanted to touch them where they were joined.

When the twins turned three, Mary started displaying them at carnivals. They were taught to dance and play musical instruments so they could perform for audiences. When they turned eight, Mary toured them to Australia and then to the US, where they stayed. 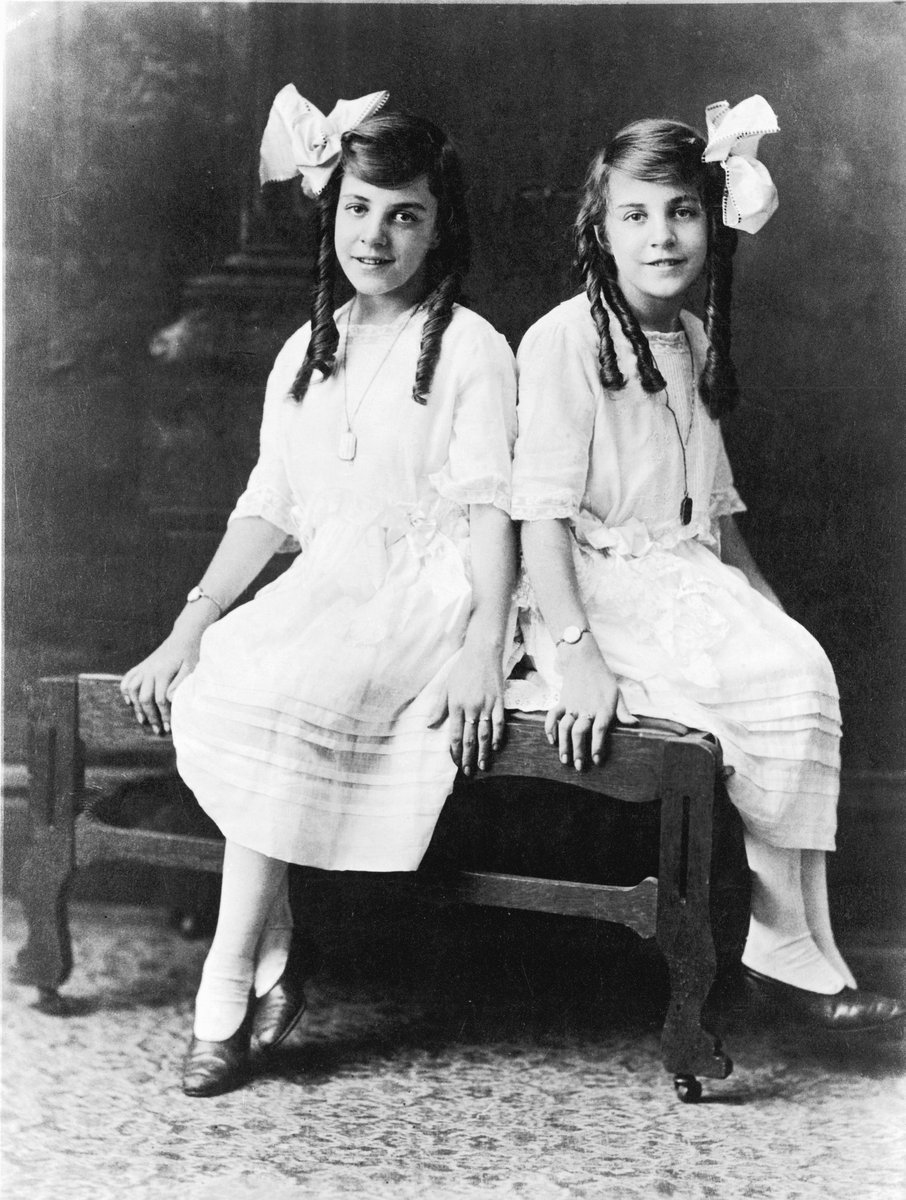 Daisy and Violet revealed in their 1942 autobiography, The Lives And Loves Of The Hilton Sisters, that they were abused by Mary as children.

"When we displeased her, she whipped our backs and shoulders with the buckle end of that belt," they wrote.

Mary died, but that didn’t mean freedom for the twins. Mary’s daughter Edith and her husband, a former balloon salesman called Myer Meyers, took control of their lives, continuing to tour them around the country. They were hugely popular vaudeville performers, described as "accomplished and charming entertainers". An ad from a Pennsylvania newspaper in 1927 has the "Amazing! Absorbing! Astonishing! San Antonio Siamese Twins" given top billing, while a newcomer called Bob Hope gets a tiny mention down the bottom. 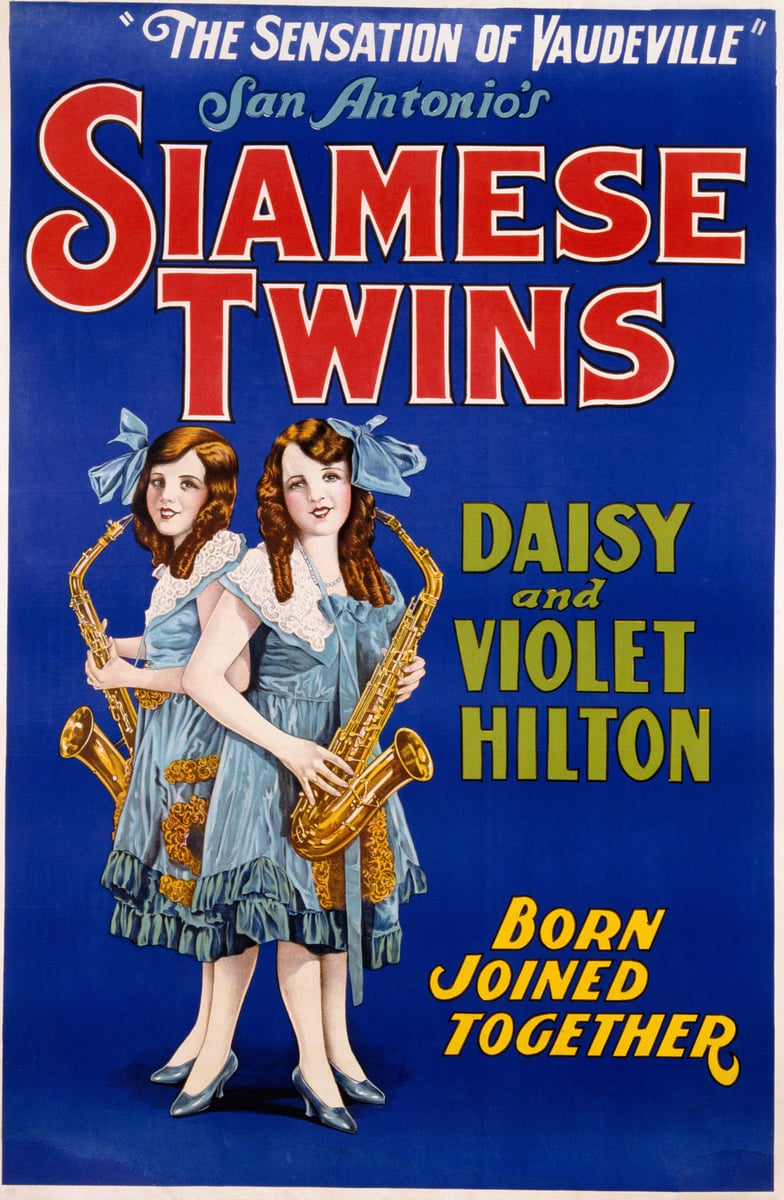 At the height of their popularity, the twins were making $US5,000 a week, although they weren’t seeing any of it. It wasn’t until Violet and Daisy were 23 that they launched a court case against Edith and her husband. They won $US100,000 and their freedom.

"We had dresses sent up, and selected no two alike, and all the silly hats we wanted," Violet said. "We could dress and act our age, and no longer be made up as children, with bows in our hair. I had always wanted to drink a cocktail."

"I wanted to smoke a cigarette," Daisy added. "We did."

"Daisy would have a date, for example, and Violet would sit there and read a book,” their friend Luther Mason explained to the San Antonio Express. "She never knew what was going on. They had trained themselves that way."

The twins continued to perform in vaudeville and later burlesque. They also starred in the 1932 movie Freaks, which was banned for many years.

Violet fell in love with a musician, Maurice Lambert. They decided to get married in 1934. But the couple’s application for a marriage licence was knocked back in 21 states, with New York declaring it "quite immoral and indecent". Eventually, they split up. 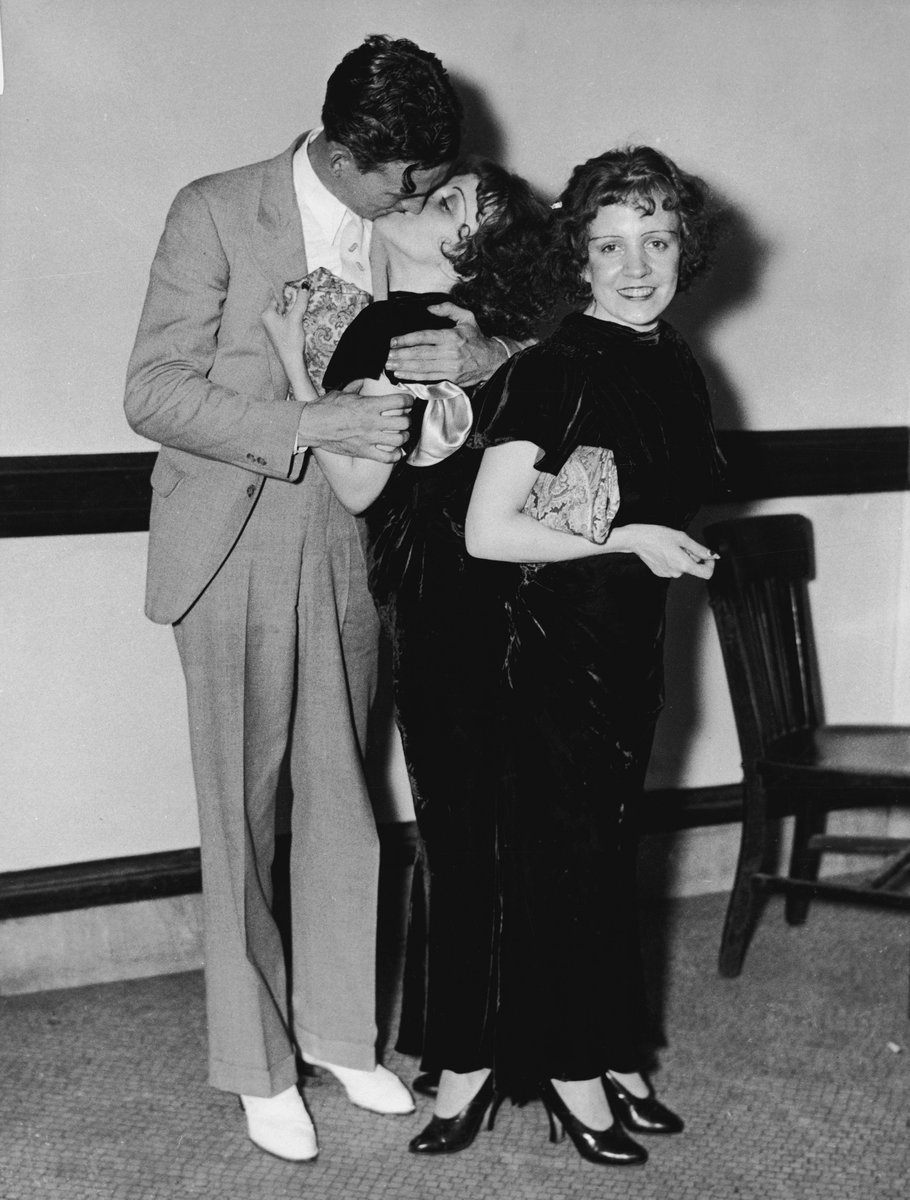 After two years, the state of Texas finally allowed Violet to get a marriage licence. But this time she wasn’t marrying for love, just publicity. Her husband-to-be was her friend and fellow performer, James Moore. Tickets to the wedding ("Witness The Most Unusual Marriage Ever Performed In The World") were advertised in the paper for 25 cents each. Daisy was the maid of honour.

The marriage was annulled soon after the wedding. Five years later, Daisy married dancer Harold Estep. Again, it’s believed to have been a publicity stunt, as the marriage soon ended in divorce.

In 1952, the twins starred in another movie, Chained For Life. It was a flop.

For a while, they ran a hot-dog stand. Then, in 1962, they started making public appearances again, promoting the re-release of their movie Freaks. After their manager abandoned them in Charlotte, North Carolina, they moved into a trailer park and asked for a job at a local grocery store, Park-n-Shop.

"They told me they could mop my floors and stock my shelves and do just about anything I needed around the store, and I'd only have to pay for one of them," Charles Reid, who ran Park-n-Shop, told Charlotte magazine.

He hired them to work on the checkout, paying them as two people, rather than the one they’d suggested. They worked there for years, although they didn’t take kindly to kids trying to lift up their dresses to see where they were connected.

"I'd be in another part of the store, but I could still hear it – that slapping noise as Daisy or Violet would pop some little boy on the head because he got too close," Charles remembers.

Daisy and Violet had no interest in being studied or separated. They explained that they had shared their lives "without quarrelling".

"We learned that most of our problems – sleeping, eating, living together – could be solved amiably," Daisy added.

When the "Hong Kong flu" pandemic swept through Charlotte, both twins came down with the virus. On January 4, 1969, friends became worried about them when they hadn’t heard from them for a few days. They asked police to check on them. Their bodies were found over a heating grate, huddled, as if trying to keep warm. The medical examiner’s report found that Daisy had died first.

They were buried in a single coffin in the local cemetery, with a small stone above them reading "Beloved Siamese twins".

In 2014, a woman named Shelagh Childs turned up in Charlotte. She’d found out, through a genealogist researching the twins' family history, that Daisy and Violet were her aunts. The unmarried barmaid, Kate Skinner, had gone on to have two more children, dying after the second one, Ethel Kate, was born. Ethel was adopted out, never knowing her birth family. Shelagh was Ethel’s daughter.

"I want people to know that someone cared about the twins," Childs told The Charlotte Observer. "That’s why I went to their grave. I know my mother would have."

She left flowers for Daisy and Violet, and "had a bit of a cry".