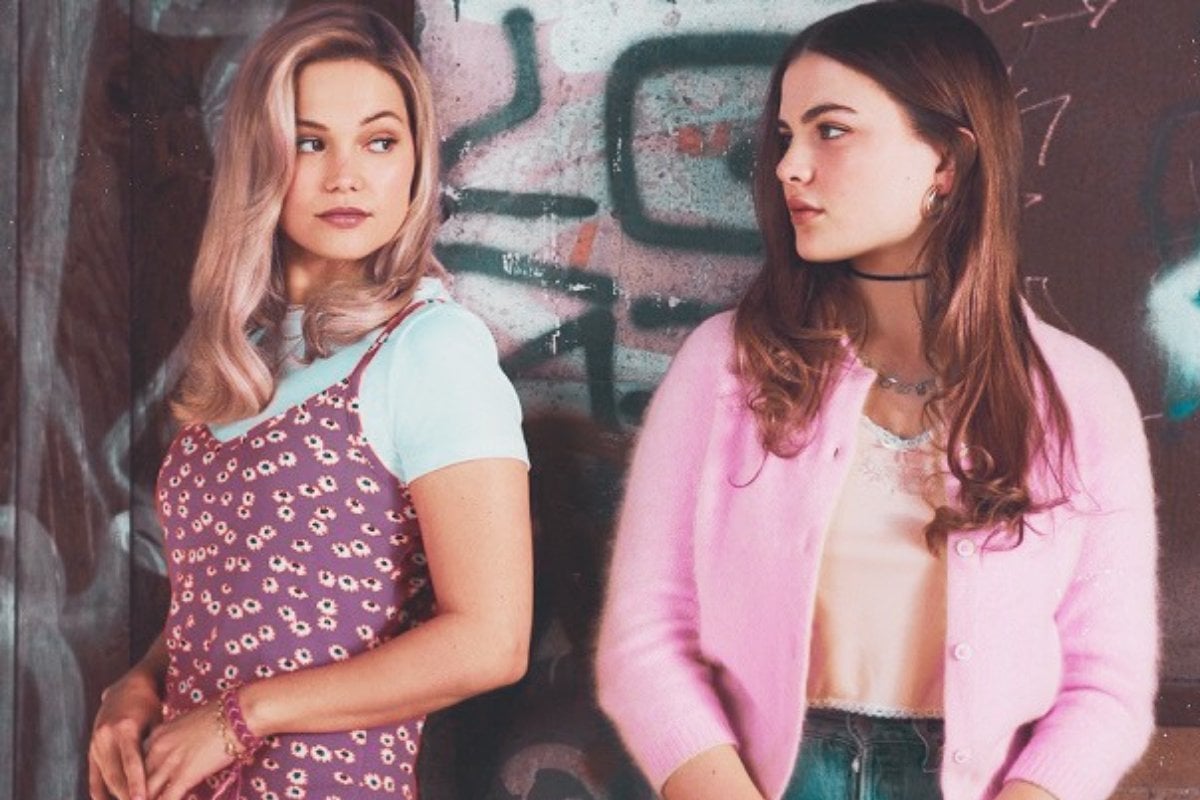 Content warning: This article contains major spoilers for Cruel Summer season one. If you haven't watched the entire season, go watch it and meet us back here!

If, like me, you inhaled the first season of Cruel Summer over the weekend, you might have a few questions about that twist ending and what it means for season two.

Watch the trailer for Cruel Summer. Post continues below.

But, gosh, it left us with a lot of questions.

Below I break down what that twist ending meant and what it means for season two:

So what happens in Cruel Summer?

In the first episode of Cruel Summer we meet 1993 Kate Wallis, the most popular girl at her high school in the fictional town of Skylin, Texas.

We also meet Jeanette Turner, a loveable nerd who spends her summer ticking off a list of dares with her best friends, Mallory Higgins (Harley Quinn Smith) and Vince Fuller (Allius Barnes), while admiring Kate's life from afar.

For one of the dares, the three best friends steal the key to the new vice principal Martin Harris's house from Jeanette's dad's real estate office and sneak into the house to play hide and seek. They're nerds, remember.

But what Mallory and Vince don't know is that Jeanette kept the key and continued to sneak into the house for the next two years.

We also meet the 1994 versions of Kate and Jeanette - Kate having just been rescued from being held captive in Martin Harris's basement, and Jeanette who is currently dating Kate's boyfriend and hanging out with her best friends.

Finally, we meet the 1995 versions of the girls - Jeanette who has cut of her hair and is the most hated girl in America. And Kate, who has isolated herself from her former friends and is hanging out with Jeanette's former best friend Mallory.

In the final scene of episode one, Kate appears on The Marcia Bailey Show (a bit like Oprah) and publicly accuses Jeanette of knowing she was in Harris's basement and turning a blind eye.

While the public quickly turns on Jeanette, she isn't charged with any crimes. She then sues Kate for defamation.

Throughout the series we learn more about Kate and Jeanette's motivations.

Through sessions with her therapist, we discover that Kate willingly went to Martin Harris's house on the night she disappeared, after months of grooming, and spent most of her time living freely in his house before he eventually locked her in the basement when she threatened to go home.

Kate tells her therapist that on her final night in the house she met "Annabelle".

Throughout the first nine episodes, Jeanette vehemently denies having any knowledge that Kate is in the house.

Which leads us to our final episode.

What happens in the final episode?

In the finale, with their court case underway, Kate and Jeanette meet at Martin Harris's house to finally get to the truth.

They discuss what really happened on the night Kate thought Jeanette saw her. Kate says she was playing with a snow globe in Harris's living room while trying to call her ex-boyfriend, and Jeanette's current boyfriend, Jamie, when she heard someone coming into the house.

She ran upstairs to hide and watched Jeanette enter the house, steal the snow globe and leave. She then ran downstairs and looked out the window. She "locked eyes" with a girl on a bike, wearing a hoodie, who then rode away.

Jeanette says she did sneak into the house and steal the snow globe but she didn't see Kate and had no idea that she was there.

They then realise the girl on the bike was Mallory, who had fallen out with Jeanette at this point, and had followed her to the house, hoping Jeanette would get caught.

Mallory then explains to Kate that she did see someone in the house but she had no idea it was Kate or that anything was wrong because she was moving freely throughout the house.

Kate also tells Jeanette about what really happened between her and Martin Harris.

So who was "Annabelle" on Cruel Summer?

Kate tells Jeanette that "Annabelle" was the name of Harris's gun.

The night before she was rescued, Harris came into the basement with the gun planning to end his own life. When he couldn't go through with it, he dropped the gun and walked away.

That's when Kate grabbed the gun and shot him.

When she called the police the next day, they stormed the house and assumed Harris had been killed in the shootout.

Why did Jeanette go on The Marcia Bailey Show?

In the final episode, Jeanette finally gets her own Marcia Bailey Show moment.

She appears on the show and tells Kate she forgives her. Therefore, positioning herself as the victim, and finally getting what she's always wanted... attention.

OK. But what about that final scene?

In the final scene of Cruel Summer, Kate and Mallory dance and kiss in the street, showing that Kate is starting to heal and move on from her trauma.

It then cuts to a scene from the summer of 1994, where the cool girl version of Jeanette is in Harris's house.

She walks into the house and calls out 'hello' to check that no one is home. But this time someone answers. It's Kate in the basement and she tells Jeanette who she is and what's happened to her.

Radiohead's 'Creep' plays in the background as a smile spreads across Jeanette's face and she silently steps away from the door and presumably leaves the house.

In this moment we were realise that Jeanette is not the innocent victim she's making herself out to be. At least, the 1994 version of her isn't.

Ok, ok. But why didn't Kate ever mention this moment?

This seems like exactly the kind of thing to bring up live on air or even during that pesky defamation case.

Either Kate forgot about this moment or thought she was imagining it.

Or maybe Kate is holding onto this piece of information for whatever plays out in season two?

Listen: The only two shows you need to watch this weekend. Post continues below.

That makes sense... why wouldn't the police notice Harris was killed hours earlier?

Yeah this is a weird one.

I know it was set in the 1990s in a small town, but surely the police would be able to tell the difference between a man they just shot and a man who was killed hours early.

Maybe the police knew more than what they were letting on or things didn't exactly pan out how Kate said they did and this will be explored in season two?

Will there be a season two of Cruel Summer?

Yep! Cruel Summer has been renewed for a second season.

It hasn't been announced yet whether the second season while continue to focus on Kate and Jeannette's storyline or tackle a completely different story.

Given all the unanswered questions we have, there's definitely plenty there for a second season focussing on Kate and Jeannette to explore.