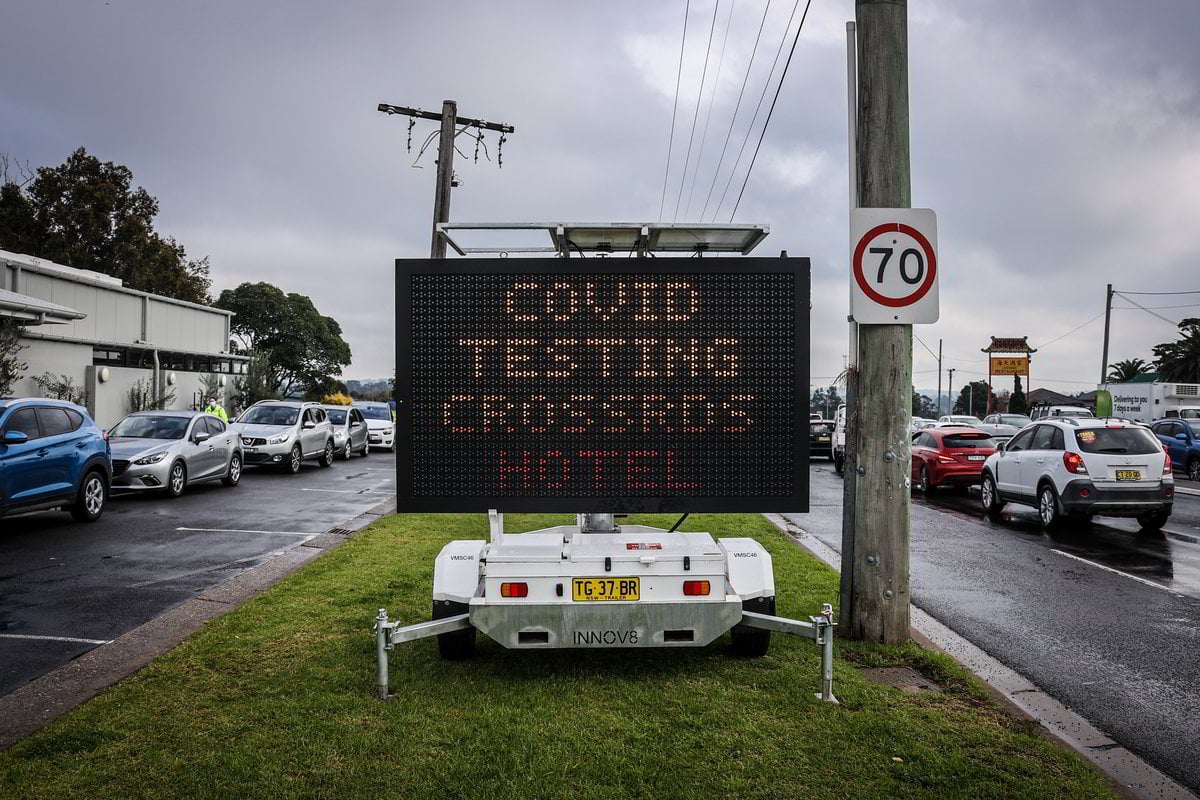 The number of COVID-19 cases linked to a cluster at a southwest Sydney pub has grown to 34.

NSW recorded 13 new COVID-19 cases on Wednesday, with 10 linked to the pub outbreak and the additional three returned travellers in managed isolation.

The source of the Crossroads Hotel in Casula cluster has finally been found, being traced back to a work party held at the pub where people were infected by a colleague visiting from Melbourne.

"We have actually learned that the most likely link, supported by epidemiology, is that a man from Melbourne came into a workplace in Sydney and there was some transmission within that workplace and then they all went to a party the night of the 3rd of July at the Crossroads Hotel," NSW COVID-19 operations manager Jennie Musto said on Wednesday.

"So this is where it all began," she said, with roughly six colleagues sharing a meal.

Earlier in the week, New South Wales was described as being at a "crossroad", with Premier Gladys Berejiklian telling media on Sunday the actions of NSW residents would be critical in determining whether it can snub out community transmission.

"Otherwise, we will go down the path of Victoria," she said, warning residents not to be surprised "if the government takes decisions to reduce the risk in the next month in particular".

On Monday, it was announced that a group of 13 Australian Defence Force personnel were in self-isolation at the Royal Australian Air Force base at Wagga Wagga, in the NSW Riverina region.

NSW Chief Health Officer Dr Kerry Chant told 2GB on Monday a small group of ADF members from the base had visited the Crossroads Hotel between July 3 and 10 and were in isolation as a precaution.

She said none were unwell or showing symptoms. 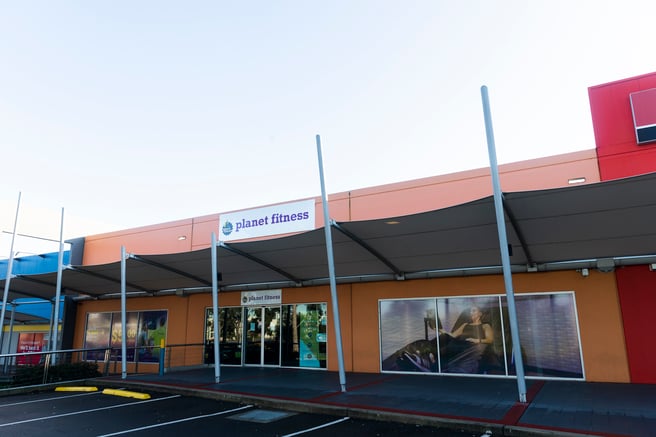 Planet Fitness Gym in Casula, which has closed after a worker tested positive for COVID-19. Image: Getty.

On Sunday night, Casula's Planet Fitness gym confirmed on its Facebook page that a member had returned a positive test for coronavirus.

"The member has not been at the club since Friday, July 10, and is in quarantine," the gym's letter to members said, adding that staff were in self-quarantine and it was following NSW Department of Health advice.

On Wednesday, two new cases were people who had been infected at the gym.

On Monday, NSW Health said The Picton Hotel, in Picton south of Campbelltown, had also closed after a person who contracted COVID-19 at Crossroads visited the venue three times while infectious.

The Macarthur Tavern in Campbelltown announced it had closed on Wednesday morning, after a patron who was in the venue on Saturday, July 11, tested positive.

Mancini's Original Woodfired Pizza in Belfield and Woolworths in Bowral also announced a positive case had been to the venues.

On Sunday, Werriwa MP Anne Stanley said she had been tested and gone into self-isolation after dining at the hotel last week.

Last week I had dinner at the Crossroads Hotel at Casula. I have followed today’s medical advice from NSW Health and I have been tested and am now in 14 days self-isolation. If you also visited the Crossroads between Friday 3 July and Friday 10 July immediately self-isolate until 14 days after you were last there and get tested even if you have no symptoms. As a precaution my office will be closed for the immediate future, staff and myself are still available working from home, please email or leave a voicemail and we will get back to you as soon as we can. Please ensure you leave your phone number and address so we can get back to you. For everyone else, continue to practice physical distancing and wash your hands regularly. If you have any symptoms, such as fever, cough, sore or scratchy throat or shortness of breath, get tested. Extended-hours testing is available at Liverpool, Campbelltown and Fairfield Hospitals. https://www.swslhd.health.nsw.gov.au/mediacentre/coronavirus/clinics.html

In an Instagram post, the federal MP said her office would be closed as a precaution with all staff working from home.

All patrons of the Casula pub, who entered from July 3 to 10, are asked to self-isolate and are being urged to get tested as a precaution.

"Southwest Sydney could become a hotspot," Berejiklian warned on Sunday. "﻿We are just hanging on."

Deputy chief medical officer Michael Kidd said there was concern that the hotel was used by freight drivers who transported essential supplies across the country.

NSW government minister Stuart Ayres said he didn't think the state's virus outbreak was getting out of control, but it was important that Crossroads visitors get tested.

"I think we're in a pretty good place at the moment, but we are at the crossroads," Ayres told Seven's Sunrise on Monday.

"I know it's a pun that everyone wants to use at the moment, but there's probably never been a more symbolically named hotel than where we sit right now.

"This particular hotel is located at the juncture of the M7 and the M5, it's a big traveller's hotel, which is why if anyone's been in that location it's so important that they go and get tested immediately."

One country in two stages.

"This is a real set back to the nation's economic recovery, there's no secret in that," he told ABC on Monday.

Medical experts are warning people to take the renewed coronavirus threat seriously, as the number of confirmed cases and deaths continues to rise.

NSW residents are urged to remain vigilant, after police shut down a number of public parties in Sydney's eastern suburbs over the weekend, as guests did not follow social distancing restrictions.

The maximum number of people currently allowed to gather at a home is 20.

Premier Berejiklian said it was "absolutely unacceptable" for residents to be breaking the rules.

"It only takes a small minority of people to do the wrong thing to have the whole state go backwards," she said. 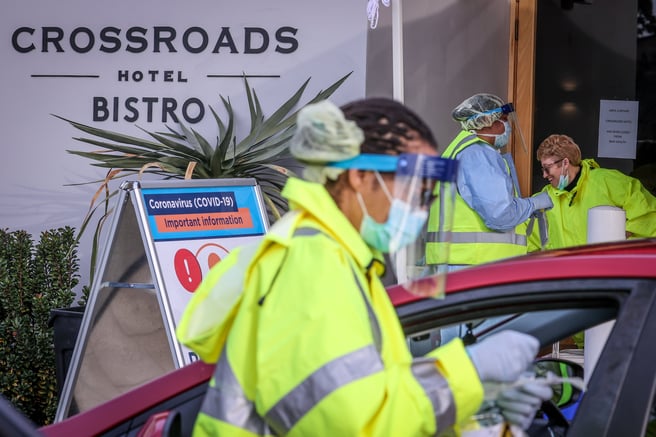 Last week, the Golden Sheaf Hotel in Double Bay was fined $5500 after photos captured about 250 customers standing shoulder-to-shoulder outside the venue.

NSW Health Minister Brad Hazzard said he was "incredibly proud" of the work the community had done to shut down the outbreak in Casula.

"We have described this fight as a war, and when the war front comes back to us, our community has stepped up as frontline troops," he said on Wednesday.

He said community transmission was unlikely to stop as long as the pandemic continues, calling it a "one in 100 year event".

Dr Chant reiterated the importance of coming forward for testing.

"This is the time that I want you to come forward. If you've been in these areas that we've announced - symptoms or not - come forward for testing," she said.

Premier Berejiklian announced the number of overseas flights would be capped and people entering New South Wales would be charged for hotel quarantining.

"We believe this is fair," Berejiklian said on Sunday.

"Australian residents overseas have had three or four months to think about what they want to do."

In other parts of the country, Victoria recorded 238 new cases on Wednesday. There was one new death - a woman in her 90s - bringing the national death toll to 111.

This article was originally published on July 13 and has been updated.