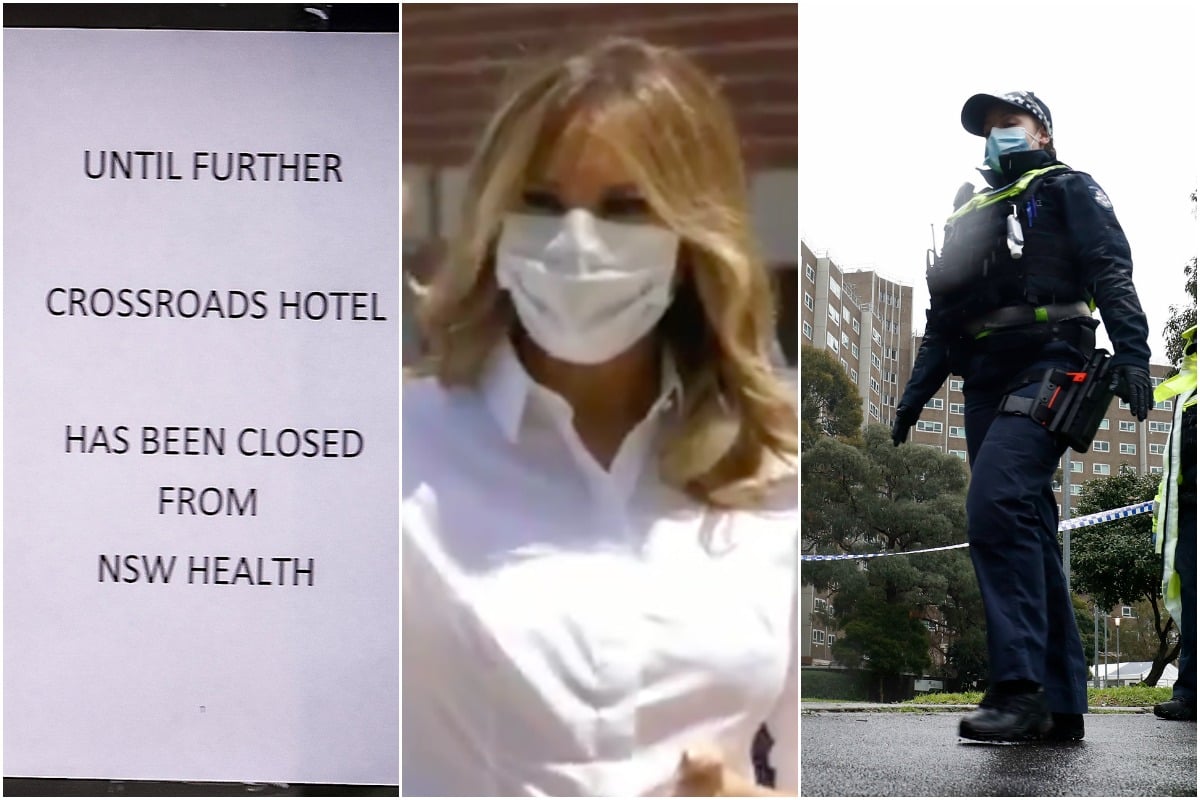 Premier Daniel Andrews has issued a plea to all Victorians to follow the latest lockdown rules, as the state recorded 273 new cases and another death.

He said health authorities could not contain the virus on their own, with those in locked-down metropolitan Melbourne and Mitchell Shire urged to limit their movement.

On Saturday, police issued 119 fines to people breaking lockdown rules, and the Australian death toll has risen to 108 with the death of a man in his 70s.

There are now 1484 active cases of COVID-19 in Victoria, with 57 people currently in hospital with the virus and 16 of those in intensive care.

Fourteen days ago, Victoria had 231 active coronavirus cases - now there are close to 1,500. #9News pic.twitter.com/CDuTTzzLKF

Chief Health Officer Brett Sutton said the pandemic had not yet reached its peak and authorities were throwing "absolutely everything at it".

"It is the public health challenge of our lifetime. The biggest for 100 years since the Spanish flu," he said.

Professor Sutton said he was particularly concerned about outbreaks in hospitals and aged care facilities in recent days, which have forced hundreds of workers deemed close contacts into quarantine.

There are 11 coronavirus cases linked to Brunswick Private Hospital, eight to the Alfred Hospital, and two to Box Hill Hospital.

"The workforces know what to do but it is a risk that can't be mitigated down to zero," Professor Sutton said.

"I have been an emergency department doctor for years and they are brave and they are brilliant in responding to the challenges of positive cases that need to be managed there."

There are 237 cases linked to public housing blocks in Flemington and North Melbourne, but Professor Sutton warned the number could be much greater.

A pub worker and some defence force members are among nine people now linked to a coronavirus cluster in Sydney, where thousands of people are likely to be required to self-isolate for two weeks.

An 18-year-old staffer and a close contact in her 50s, plus a woman in her 40s and a Victorian man in his 20s, who both dined at The Crossroads Hotel, are the latest to test positive for COVID-19.

All patrons of the Casula pub, who entered from July 3 to 10, must now self-isolate, with the RAAF base in Wagga Wagga in lockdown after several members visited the pub during that time.

While there are said to be two suspected cases at the base, so far none have been confirmed by health authorities. 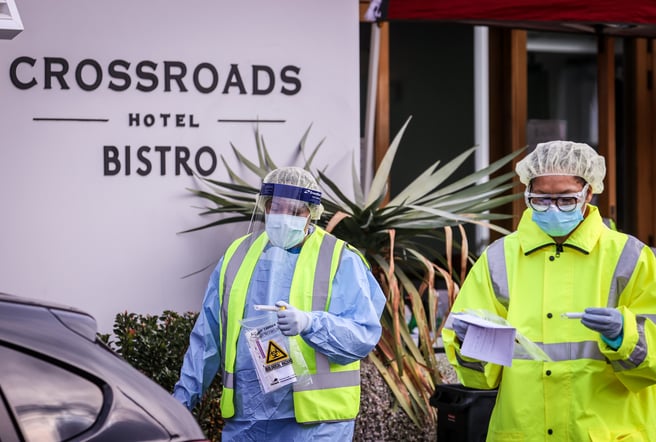 More cases have been linked back to The Crossroads Hotel in Sydney. Image: David Gray/Getty.

Another potential hotspot has emerged in Sydney's Casula, with the suburb's Planet Fitness gym confirming on its Facebook page that a member had returned a positive test for coronavirus.

"The member has not been at the club since Friday 10 July, and is in quarantine," the gym's letter to members said, adding that staff were in self-quarantine and it was following NSW Department of Health advice.

A Sydney gym has closed for cleaning after a member had returned a positive test for coronavirus. #7NEWS https://t.co/eIuzPBoDx6

From Saturday, for all arrivals on tickets bought from midnight Monday, the first adult in each party will be charged $3000.

Subsequent adults will be billed $1000 and children $500, but those under three will be free. Some people will be exempt.

A COVID-19 vaccine developed by the University of Queensland is now ready to be tested on humans, giving hope of a breakthrough in combating the virus which has caused a worldwide pandemic.

The human testing of the "molecular clamp" vaccine candidate, to start on Monday, follows encouraging results from animal testing trials conducted in the Netherlands, the Sunday Mail in Brisbane reports.

Premier Annastacia Palaszczuk praised UQ for their search for a COVID-19 vaccine and said she expected the university to reveal more on Monday.

The first testing on humans of a Queensland-developed potential vaccine for COVID-19 will begin on Monday after successful animal testing. https://t.co/IKQhWSvPge

Professor Robert Booy, head of Clinical Research at the National Centre for Immunisation Research and Surveillance, said the animal trials would have "ticked all the boxes" allowing the human testing to go ahead.

"There is no way the research team would be able to progress from animals to humans without a complete guarantee of safety and they would likely have a confidence in its effectiveness."

There are more than 130 vaccines in the works around the world but UQ's work is believed to have shown great success in the pre-clinical stage of development.

On Saturday, President Donald Trump wore a mask in public for the first time ever during a visit to a military hospital.

As he left the White House, he told reporters: "When you're in a hospital, especially ... I think it's expected to wear a mask."

In a video that was taken on Thursday, but only posted online Sunday, the First Lady can also be seen wearing a face covering for the first time in months.

It was a pleasure to spend time with the staff, mothers & children at The Mary Elizabeth House, a place that helps strengthen families & provides life skills, counseling & educational resources to help vulnerable single women & their children. #BeBest pic.twitter.com/hQSjP0sHi1

Melania Trump first posted about the importance of wearing a face covering to prevent the spread of coronavirus in early April, but has gone without in recent months as the safety measure became a political dividing line.

The number of US infections is now over three million, with daily case numbers surpassing 62,000.

President Donald Trump, who has avoided wearing a mask in public, wore one in a visit to a military medical facility outside Washington https://t.co/2VT9pyC0S3 pic.twitter.com/qD1hAtZRaU

- The World Health Organization has reported a record increase in global coronavirus cases, with the total rising by 230,370 in 24 hours.

- 3000 Australians have been left in limbo in Bali after Indonesia announced it will end emergency stay visas handed to foreigners at the start of the coronavirus pandemic in just 30 days.

- Glee actress Naya Rivera remains missing, presumed drowned, after her son was found floating alone in a boat in a lake in southern California. The 33-year-old's family have been visiting the dock every day.

- 18 US sailors have been injured after a large fire engulfed a navy ship docked in San Diego.