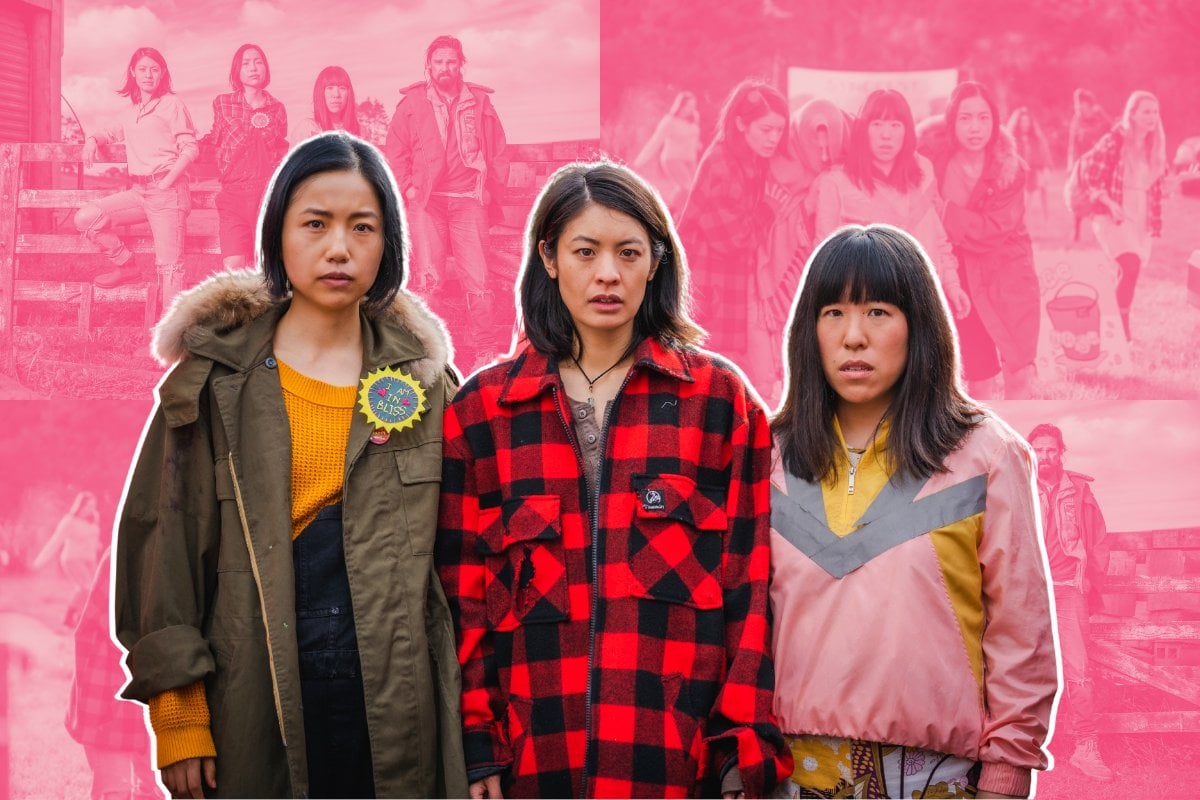 It's something we've all thought about, at least once... right?

This is the basis of Creamerie, a new dark-comedy streaming on SBS on Demand, that explores a society eight years after all the dudes were taken out by a mysterious virus.

There are certainly some... positives. Mandated period leave, for example. But when one very lost, very dishevelled man (gasp!) appears, some pretty deep cracks in the female-only society begin to show.

Creamerie is set in the not too distant future, in a post-pandemic world. I know, it's a bit on-the-nose, given...

*gestures broadly at everything* Image: Giphy.

Sure, there're no men anymore, but the careful dissemination from pre-virus sperm banks keeps the population ticking along for now (although only girls have a chance of being born).

Wellness has implemented mandatory menstruation leave, as well as free education and healthcare for all. Weekly orgasms are practically law. "Guys" is considered a triggering word, and the phrase is now "oh my Goddess", but besides that it actually seems... fine. On the surface.

Eight years since the virus, on an organic dairy farm in rural New Zealand, a trio of women - Alex (Ally Xue), Jamie (J.J Fong) and Pip (Perlina Lau) - live in various levels of satisfaction at the state of their society.

Alex is straight up pissed, meaning she's almost always living in Bliss, a form of punishment which seems to make the receiver so... blissful that they're no longer in control of their thoughts or feelings. Jamie had a son pre-virus, and is so desperate for another child she's willing to break a few rules. And people pleaser Pip is desperately trying - and failing - to climb the Wellness corporate ladder, making her a stickler for the rules and a major suck-up.

Trouble arises when they stumble upon a woman who happens to have a magnificent beard and... wait. Upon closer inspection, that's definitely a man.

Where the hell did he come from? How did he survive? Are there... more?

But actually, the spectacular casting. It's cast perfectly, from the lead trio to the hilarious Rachel House as Wellness' doctor and Jay Ryan as the dishevelled Bobby. Oh, and Tandi Wright as the Goop-inspired Wellness leader will definitely remind you of someone you hate-follow on Instagram.

Laughs. So many laughs. Plus, it ends with one hell of a cliffhanger.

The concept will remind you of a gender-flipped The Handmaid's Tale, but funny and without any long close-ups of the protagonist's face.

There are six episodes averaging about 25 minutes each. I know right? It's practically begging to be binge-watched.

The series ends with an absolutely wild cliffhanger, so I bloody well hope so.

Thankfully, it seems probable: Perlina Lau, who plays Pip, wrote about the experience of making a show about a pandemic... in a pandemic for Kiwi outlet The Spinoff. In stating the cast had managed to remain friends throughout the whole thing, Lau joked that "season two will probably end us".

I mean. I'm sure they all really value their friendship... but I need to know what happens next, please.

Creamerie builds a fascinating world and introduces us to three incredibly real, well-rounded characters in Alex, Jamie and Pip.

It tackles some really dark topics and seems to know exactly when to lean in and lean out of its hilarity.

It's a quick and easy watch at just two-and-a-half hours long, but you'll be left thinking about it long after the final credits.

Creamerie is streaming now on SBS On Demand.

Reply
Upvote
2 upvotes
I was enjoying this show at first, but I was absolutely shocked that it includes a gang sexual assault scene with absolutely no viewer warnings, and as if it’s a totally normal part of a comedy. If it was gender reversed people would be outraged, but apparently a bunch of women attacking a man is comedy. I’m shocked they SBS are showing it.
M
mamamia-user-893622181 a year ago