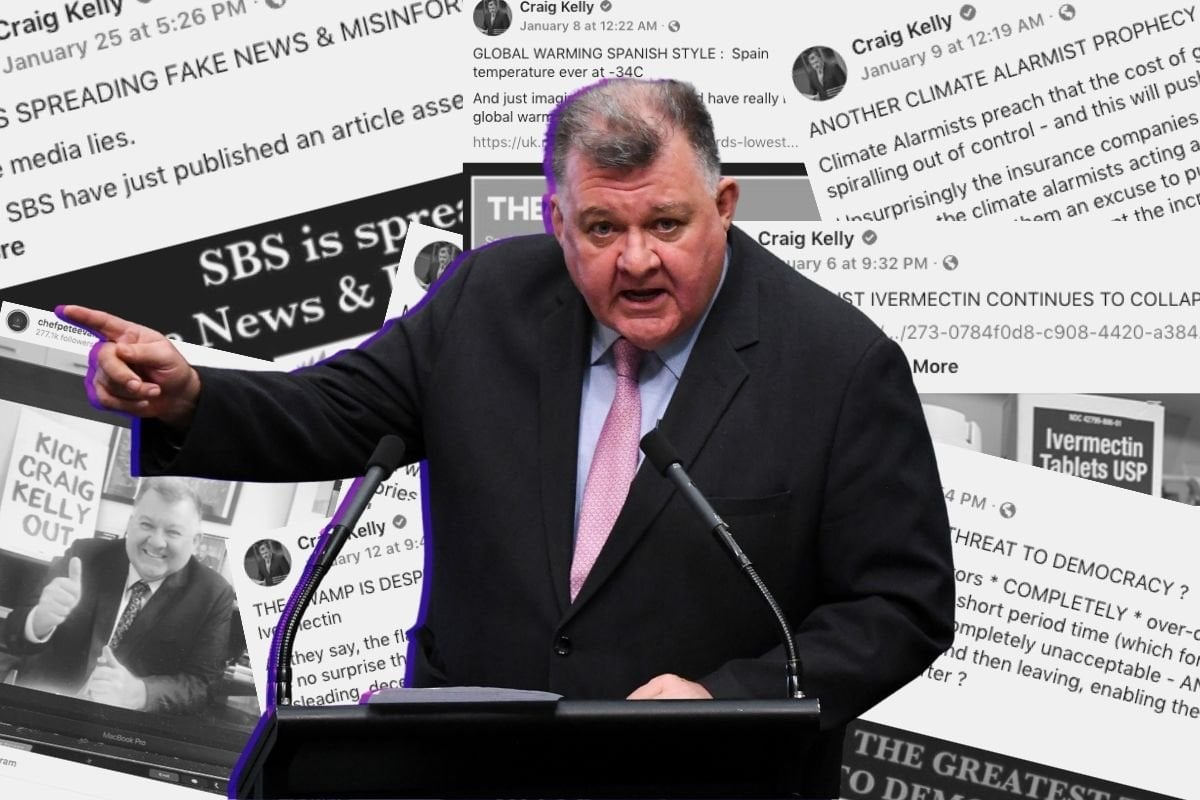 Craig Kelly is a Liberal MP who has served as the Member for Hughes, in southern Sydney, since 2010.

He has long been known for his controversial views, but since the coronavirus pandemic, Kelly's outspoken, misinformed and at times dangerous commentary has reached a new fever-pitch with the prime minister facing increasing pressure in recent weeks to pull him into line.

Appearing on well-known conspiracy theorist Pete Evans' podcast this week, despite it being dumped by Spotify in January for spreading misleading content about COVID-19, appears to be the final straw with senior cabinet members, media commentators and doctors all voicing their concerns, forcing Scott Morrison to, on Wednesday, finally pull him up.

First, a bit of background.

As of January 2020, Kelly's Facebook page had higher levels of engagement than both the prime minister and leader of the opposition, thanks to his persistent rallying against climate science.

Kelly has long been a divisive, right-wing fixture of Australian politics, with Carrington Brigham, managing director of digital at communications agency Agenda C, telling the Sydney Morning Herald a year ago that he had "cultivated a multi-conservative following." 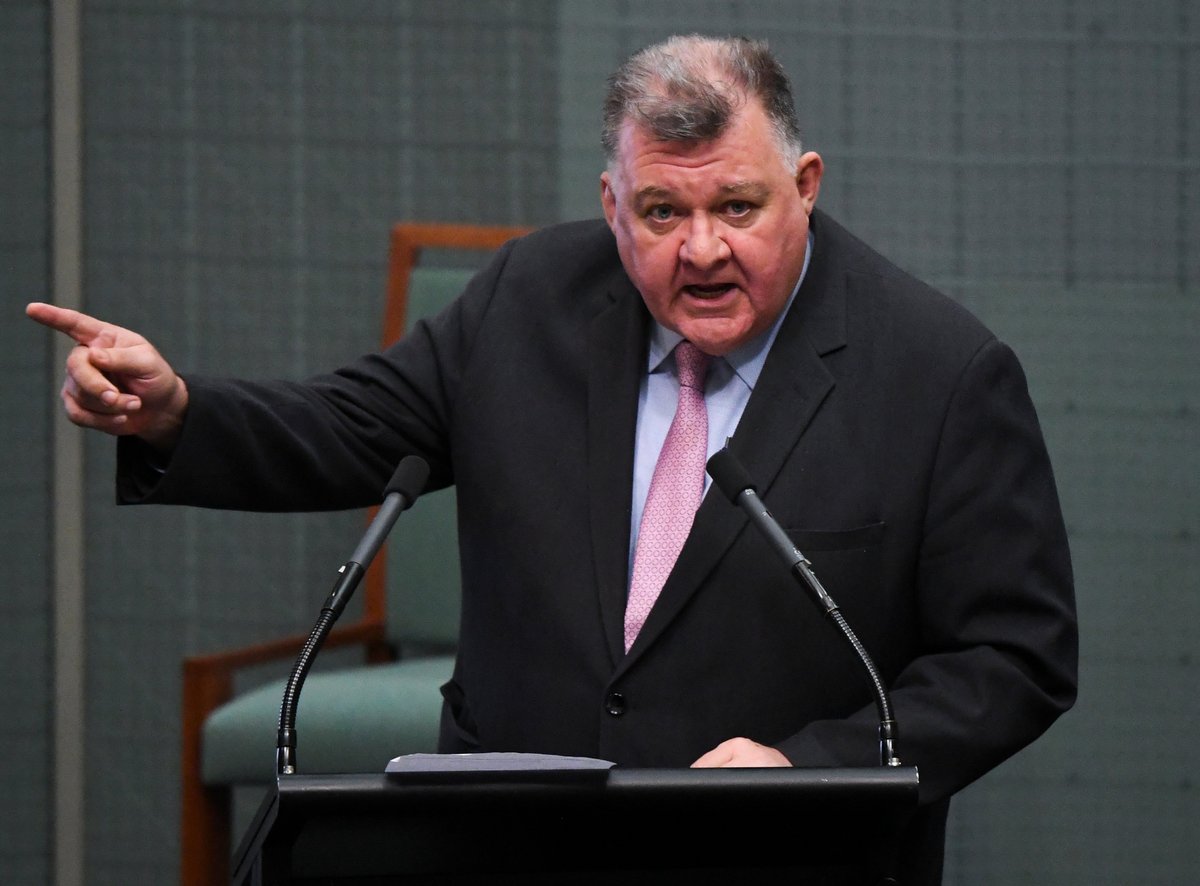 Craig Kelly was a controversial member of parliament long before the pandemic hit. Image: Getty.

Kelly has been an advocate for disability over the years, using his first speech to Parliament to describe the challenges of raising a son with Down syndrome. But ever since he's been making far more headlines for his controversial viewpoints than anything else.

Pre-COVID, Kelly was making headlines for accusing the ABC of covering up information about the Indian Ocean surface temperatures, referred to the link between bushfires and climate change as "rubbish" and was called out for referring to a Good Morning Britain meteorologist as an "ignorant pommy weather girl" following a cross with the broadcaster.

After the downing of MH17 he angered the families of those killed for suggesting Russia's involvement should be "looked over" for the sake of good relations.

He has unashamedly pursued policies he believes will lower power prices at the expense of reducing carbon emissions.

And in 2017 he was a vocal voice against the same-sex marriage debate, accusing his colleagues of "breaking an election commitment" if they crossed the floor and forced a parliamentary vote.

So what happened once COVID-19 hit?

With an already strong following behind him on social media when the pandemic hit, Kelly spent much of 2020 spreading increasingly problematic and misleading information about COVID-19.

He has used his Facebook page to promote conspiracy theories, likened requiring children to wear masks to "child abuse", and has been a very vocal champion for the use of hydroxycholoroquine - the drug used on Donald Trump when he was diagnosed with coronavirus, despite the Therapeutic Goods Administration (TGA) discouraging its use on patients.

He has also repeatedly peddled head lice medication Ivermectin as a potential virus treatment on his Facebook page, despite Commonwealth Chief Medical Officer Paul Kelly saying there was "no evidence" to show it should be used as a treatment option for Australians. And he has gone against his own party by declaring that he will "wait to see the evidence" before being vaccinated against coronavirus, a month before the Morrison government rolls out a nationwide vaccination plan.

Amongst the pandemic commentary, Kelly also had time to spark outrage for claiming Facebook censorship was a bigger threat to democracy than the Washington DC riots while claiming Antifa was part of the mob, and discredited the United Nations by claiming the global organisation had “been taken over by liars, fools and socialists”.

On Monday February 1, it was revealed that Kelly had sat down with chef turned conspiracy theorist Pete Evans for a 90 minute chat on his podcast, with Evans referring to him as a "beautiful and courageous man".

"Craig Kelly MP is sharing the truth over and over again and keeps moving forward without fear. You my friend are a true hero to many free thinking Australians and I look forward to sharing a meal with you....perhaps in Canberra in the not too distant future?" he wrote while promoting the upcoming episode of his podcast.

Pete Evans' views have been condemned time and time again as dangerous and misinformed. Most recently, he published a picture of a cartoon caterpillar wearing a Make America Great Again hat, talking to a butterfly with a Black Sun symbol on its wing. The symbol is known to be a reference to Neo-Nazism.

He was subsequently dumped by his publisher, with his books stripped from the shelves of major retailers across the country. His podcast channel has also been removed from Spotify for promoting "dangerous false, deceptive, or misleading content about COVID-19."

In 2020 alone, Evans claimed the coronavirus pandemic was a scam and falsely claimed the Black Lives Matter protests are an extreme Left Conspiracy. He also put a link in his Instagram bio that directed his followers to an interview with David Icke, who is a Holocaust denier and who also falsely believes the "plandemic" conspiracy theory.

Kelly's involvement in the podcast appears to be the final straw for many.

What's the reaction to Kelly's views?

The podcast appearance provoked an angry response from the Royal Australian College of General Practitioners, who accused Kelly of enabling a conspiracy theorist and spreading misinformation.

It is unacceptable that Craig Kelly is persisting in disseminating misinformation concerning #COVID19 and to appear on this podcast with Pete Evans is very unhelpful. As @RACGP President I urge all public figures to act responsibly.https://t.co/auVILwGlI2

Labor has also been demanding he be reined in, with the prime minister refusing to condemn the backbencher’s online behaviour on Monday, telling the National Press Club, "He’s not my doctor and he’s not yours, but he does a great job in Hughes."

"Well, we've been very clear to point out where you get your information from. You don't get it from Facebook. You get it from official government websites," he added.

Protecting Australians from the coronavirus should be the number one priority of the Morrison Government.

Instead, they're protecting Craig Kelly.

In reference to Kelly comparing mask use in NSW to "child abuse," Hunt replied, "We follow the advice of the medical advisers. And many people, as I've just said, will put out differing views. Many of those views have been shown to be wrong. I would urge everyone to listen carefully to the advice of the Australian medical regulators and Australian Government medical advisers."

Shadow Health Minister Mark Butler wrote on Facebook on Tuesday: "Craig Kelly is a dangerous menace and a threat to the nation's COVID response. It's beyond time the Prime Minister developed the backbone to pull him into line."

Morrison’s defence of this right-wing nut-job is a national embarrassment. Can you imagine Menzies defending such a wholesale assault on reason, evidence and science? Morrison’s Liberal Party has been taken over by religious zealots from the extreme right https://t.co/CERHyxPB4V

"My mum lives in your electorate and I don’t want her exposed to people who are not going to be vaccinated because of these crazy conspiracy theories that you’re spreading....So you're saying the prime minister is wrong?" she asked him.

On Wednesday morning, government sources have told various media outlets Kelly had a 30-minute face-to-face meeting with the prime minister who told him to stop pushing COVID information contrary to the government’s health advice and restrict his social media presence.

In a statement Kelly has said: "The prime minister reinforced the importance of public confidence in the government’s vaccine strategy.

"I agreed to support the government’s vaccine rollout which has been endorsed by the medical experts.

"I have always sought to support the success of our nation’s public health response during the pandemic.

"I believe the spread of misinformation can damage the success of our public health response during the pandemic."

Senator Penny Wong, however, is among those who still don't think Morrison's actions go far enough.

It’s not enough for Scott Morrison to spin to media that he’s given Craig Kelly a dressing down - especially now George Christensen’s also chiming in.

Mr Morrison is PM. He needs to lead - not just pose for photo ops.

I just asked @Birmo in #QT if @ScottMorrisonMP will require Craig Kelly to remove all his social media posts peddling vaccine disinformation.@birmo refused to say.

Really strong approach PM 🤨. All of Kelly’s posts undermining the vaccine stay up online on his accounts.🙄

When conspiracy theories and disinformation endanger public health, it’s on those of us in leadership positions to call it out.

Loudly. Publicly. And not just to get a line up in the media.

It’s time for the Prime Minister to step up.

Reply
Upvote
2 upvotes
Amazing how this pandemic has made everyone an overnight expert in not only public health, epidemiology, infectious diseases and immunology, but also now preclinical and clinical drug trials and approval processes. The hubris is staggering.
A
anonymous a year ago

Reply
Upvote
It is so interesting to see how hesitant people are about getting a coronavirus vaccine due to not trusting that there has been adequate, long-term testing or being given easy access to the testing results to see any adverse effects.
Kind of like parents, who today can be hesitant about injecting their babies with over two dozen vaccines without being given easy access to information about adverse affects. They just get told 'because we say it's safe and you must trust us - the industry who makes billions of dollars in profit from these vaccines.' Hesitant parents get labelled 'anti' vaxxers, even though they are just hesitant.
Now let's talk sensibly about vaccines. Full transparency and support of hesitancy to give them easy access to the information they need, rather than demonising the hesitant as if they are wanting to deliberately inflict harm on others.
C
cat a year ago

Reply
Upvote
3 upvotes
@anonymous but there is no easy info about adverse effects because, except in the case of a severe allergy, vaccines don’t have adverse effects. The issue is that people take that as proof of some sort of conspiracy, not as a sign that getting a vaccine is safer than taking Panadol when you have a headache.
No one is asking people to trust pharmaceutical companies. They aren’t the ones approving the vaccine, it’s done by independent scientists and doctors all over the world, with no incentive to lie.
And there is full transparency- you can read the peer reviewed and published articles about all the corona virus vaccines any time you like. You can also read it on Wikipedia. There are medical and scientific experts talking about them in tv every evening. I don’t see how it’s possible to be more transparent- unless you inherently want to believe there’s some information being withheld.
G
guest2 a year ago

Reply
Upvote
@cat The side effects of the Pfizer/Moderna vaccines can be brutal, but short lived.   High fevers (including rigors), localized lymphadenopathy, nausea, vomiting, severe headache, lasting up to 2 days in most people (for those who do get these side effects).    These side effects are widely reported and My sister who had Moderna experienced all of them for about 48hrs (along with her work colleagues).    Some people have landed in hospital, but all have said they are glad they had the vaccine.   The concern for some people is any long term side effects  of a vaccine (as in the case of Pfizer/Moderna) never used on humans before.
K
kylie a year ago

Reply
Upvote
1 upvotes
@anonymous I understand hesitation, it makes sense, especially when our kids are involved, but....vaccines are such a privilege - there are so many countries that kids are dying of all the dozens of things you rightfully say our kids are vaccinated against.
This vaccine is the coming together of all the worlds best scientists, researchers and doctors - and it’s our way out of this mess (so long as those poorer countries are also vaccinated at an equal rate).
C
cat a year ago