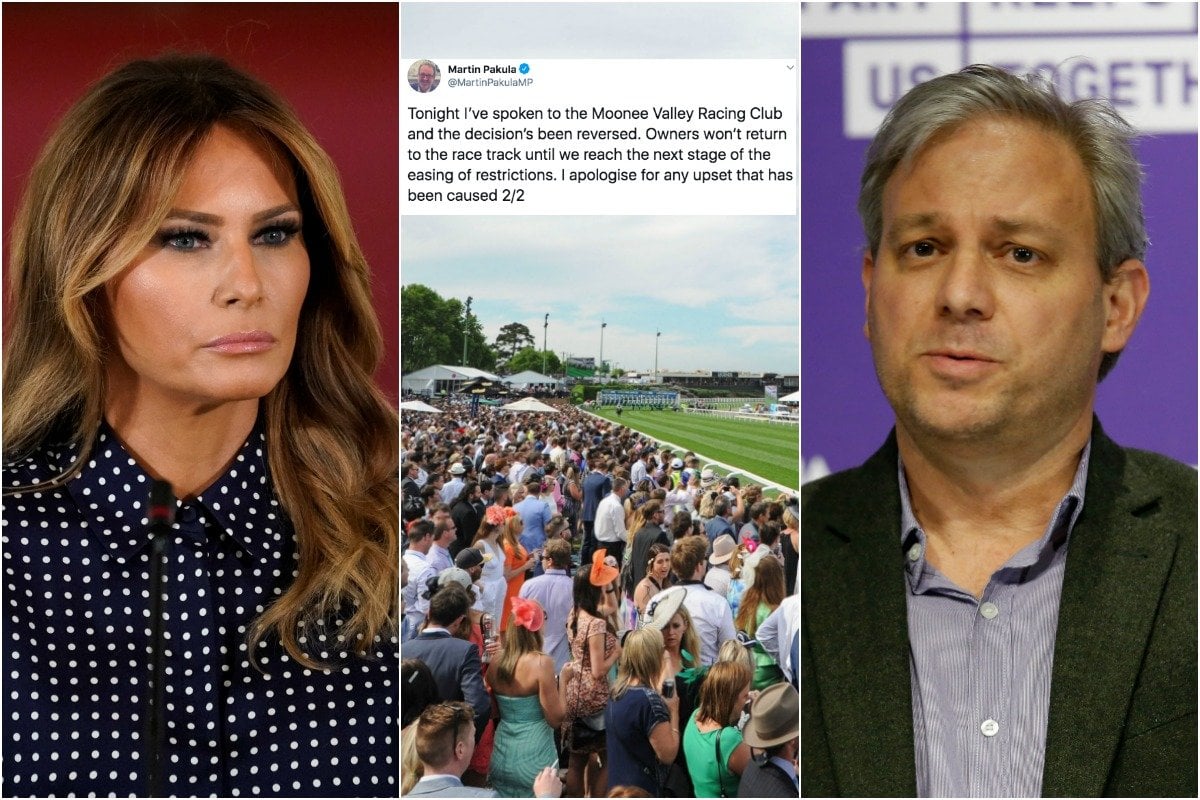 The Victorian government has backflipped over its controversial call to allow a select group of spectators on course for the 100th running of the Cox Plate after intense political and online backlash.

He said he'd spoken to the Moonee Valley Racing Club on Tuesday night and the decision had been reversed.

The Victorian government has backflipped over its controversial call to allow a select group of spectators at the Cox Plate after being blasted over the decision online.https://t.co/0iesYjxf5H

"It was a mistake, given that other restrictions remain in place, and we've heard the community feedback," he tweeted.

Ellen Sandell, acting leader of the state Greens, branded the original decision a kick in the guts to Victorians after months of being unable to see family, go to funerals, have visitors at the hospital or open their businesses.

"It seems to be one rule for them and another rule for the rest of Victoria," she said in a statement.

COVIDSafe arrangements including a 1000-person course cap, staggered arrivals, temperature checks, social distancing and takeaway only food and beverage services had been planned.

Tonight I’ve spoken to the Moonee Valley Racing Club and the decision’s been reversed. Owners won’t return to the race track until we reach the next stage of the easing of restrictions. I apologise for any upset that has been caused 2/2

Last night a letter was sent to the premier from seven of Australia's biggest companies pleading for Victorians to be allowed back to work.

Signed by the CEOs of Wesfarmers, Coca-Cola Amatil, BHP, the Commonwealth Bank, Orica, Newcrest Mining and Incitec Pivot they praised Victorians for their "resilience" but wrote: "The current situation is not sustainable. Victorians are hurting badly, personally and economically. Medical experts have warned of the devastating effects the restrictions are having on health and mental wellbeing."

"We urgently need to kickstart our economy, and as leaders of some of Victoria’s biggest businesses we want to do our bit," they added.

Victoria's Chief Health Officer Brett Sutton has been asked to provide a new statement to the hotel quarantine inquiry after emails emerged contradicting his earlier testimony.

An extraordinary hearing of the inquiry was called on Tuesday after the Department of Health and Human Services handed over a number of emails it had not originally tendered.

The department's lawyers said they did not consider them critical or relevant. But counsel assisting the inquiry Tony Neal QC said the emails cover "matters that occupied a very considerable amount of the board's time" during the inquiry.

One email chain, which begins on March 30 and ends on July 2, involves a number of senior DHHS officials, including Finn Romanes, the then-Deputy Public Health Commander. 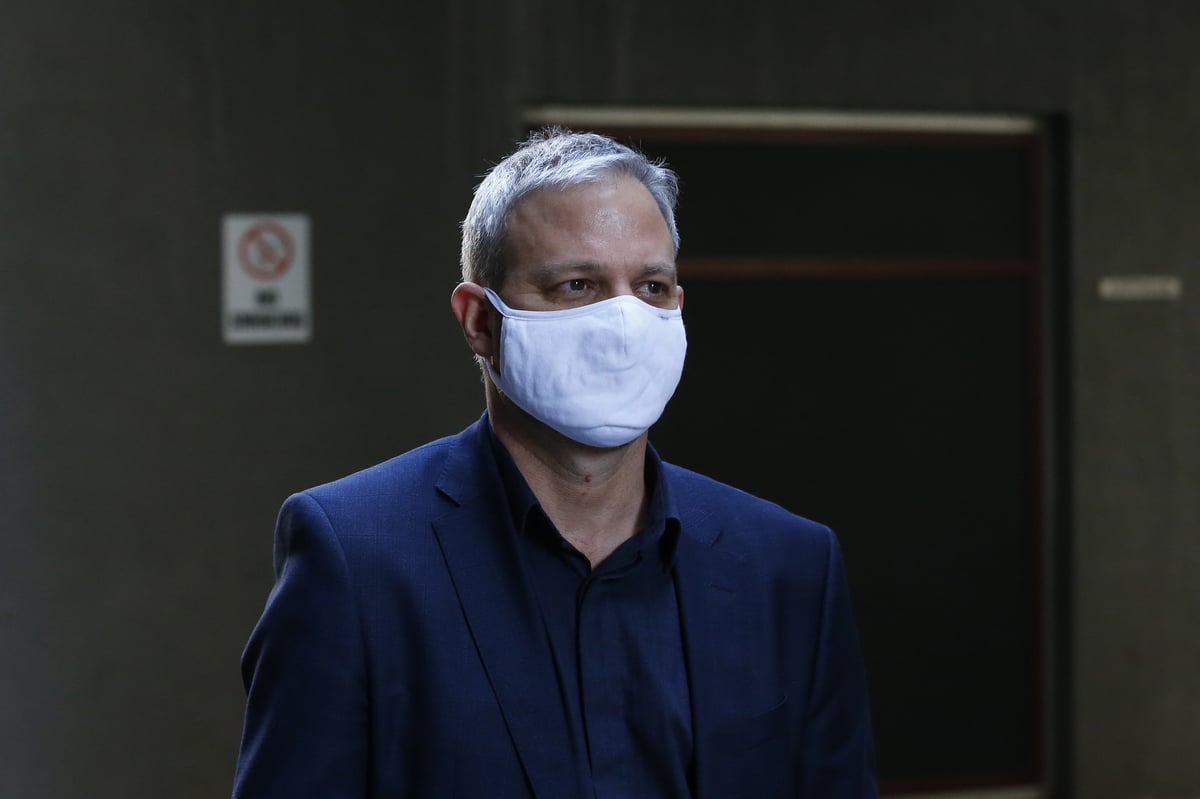 A second email chain on March 27 involves a number of DHHS staff, including Prof Sutton, and a federal government official.

The official asks a number of questions regarding Victoria's quarantine program, including what security arrangements will be in place.

Prof Sutton is copied into a reply which reads: "Private security has been contracted to provide security at the hotels with escalation arrangements to Vic Pol as needed".

Prof Sutton had told the inquiry in September he was not aware of guards being used in the program until media reports about a COVID-19 outbreak at the Rydges on Swanston hotel in late May.

Four Adelaide newborns have passed away after travel restrictions prevented them from receiving life-saving heart surgery.

The babies would normally have been flown to Melbourne’s Royal Children’s Hospital for specialist heart surgery, but Victoria's lockdowns prevented that from happening.

SA Health was also of the view that the babies should remain in Adelaide for fear of exposing­ them to the virus in Victorian hospitals as they were immunocompromised.

Medical staff told a SA parliament public health committee on Tuesday the failure of the SA government to fund a specialist paediatric service, had also left the four babies with no hope.

It's a service that exists everywhere else in the country except for Tasmania.

About three-quarters of people living in Australian aged care facilities say their needs aren't always met, a survey for the Royal Commission into Aged Care Quality and Safety has found.

Low staffing levels, unanswered calls for help, high staff turnover and poor training for workers worried many facility residents, according to a report by the National Ageing Research Institute.

The survey of about 400 people also showed many residents feel lonely, bored and misunderstood by their care provider.

Similar results were reported by people receiving a home care package, who also say their care needs are not always met

Poor value-for-money, fee transparency, service coordination and staff rostering were among the concerns troubling them.

The Morrison government is struggling to deal with a surge of stranded Australians seeking to return home before Christmas.

The increase in numbers to 32,300, from 18,800 in late August, comes as the one-way New Zealand coronavirus travel bubble causes havoc among the states.

South Australia has overturned its initial plan to force NZ visitors to quarantine for 14 days, allowing 12 travellers who arrived unexpectedly into Adelaide to be released from hotel quarantine.

Sydney Airport was full of tears and hugs as the first Kiwis were allowed back in Australia after months of separation from family and friends.https://t.co/MzpIzy2HqH

A Senate estimates committee was told on Tuesday there were 32,300 Australians who have put their names forward to the Department of Foreign Affairs and Trade to return, as the coronavirus pandemic continues.

The trans-Tasman travel bubble was originally only supposed to include New Zealand, NSW and the Northern Territory.

But traveller from New Zealand have hopped on domestic flights to all corners of the country after touching down in Sydney.

Victoria recorded just one new case and no additional deaths.

Trump labels last debate 'unfair' as he calls for an investigation into Biden.

US President Donald Trump has criticised plans by the debates commission to mute candidates' microphones during portions of the final presidential debate.

The Commission on Presidential Debates announced late on Monday that Trump and his Democratic rival Joe Biden will each have two minutes of uninterrupted time to initially answer the moderator's questions when they face off on Thursday.

"The whole thing is crazy," Trump said in a phone interview on Fox News, saying the commission had already unfairly muted his microphone during debates in 2016.

During the Fox interview, Trump again labelled Biden a "criminal" accusing him of "major corruption," with the president calling for US Attorney-General William Barr to launch an investigation of his political opponent, Joe Biden, before the election.

However Trump’s Director of National Intelligence, John Ratcliffe, told the same broadcaster, "what exactly is the accusation against Biden here?" rejecting ideas that the Democratic nominee would be investigated.

Melania Trump's return to the US presidential campaign trail will have to wait.

Her chief of staff, Stephanie Grisham, says she continues to feel better every day following her recent recovery from COVID-19 but has a lingering cough.

Melania Trump is canceling her first campaign appearance in months because she is not feeling well as she continues to recover from Covid-19https://t.co/Tfljtt7yUx

Grisham said the first lady has decided not to accompany President Donald Trump to a campaign rally on Tuesday evening in Erie, Pennsylvania, out of an abundance of caution.

Melania Trump's last public appearance was during the September 29 presidential debate in Ohio.

She and the Republican president received their positive test results in early October.

The first lady announced last week that she had recovered.

Peter Madsen, who was convicted of killing Swedish journalist Kim Wall in a self-built submarine in 2017, has been caught by Danish authorities after he briefly escaped from prison.

Madsen forced his way out of the prison, located just outside of Copenhagen, using objects resembling a gun and a bomb belt and holding a prison employee hostage, local police said.

Madsen was sentenced to life in prison in 2018 for murdering, sexually mutilating and dismembering Wall aboard the submarine in Copenhagen harbour.

Madsen was arrested less than a kilometre from the prison, five minutes after police were alerted, police chief Mogens Lauridsen told reporters at a press briefing.

Justice Minister Nick Haekkerup said in a tweet after Madsen's recapture that the ministry was planning a range of new measures to prevent future prison escapes.

More than forty mayors and councillors across Australia have pledged to create a stronger economy that facilitates jobs and tackles climate change.

The joint statement released on Wednesday outlines their commitment to supporting industries which invest in a zero carbon future and help those communities hardest hit by climate disasters and the COVID-19 pandemic.

- New Zealand has elected its most diverse parliament ever, with near half of MPs women, 10 per cent from the LGBTIQ+ community, 24 Maori MPs, and the first ever MPs of African, Sri Lankan and Latin American origin.

- The US Justice department will today file a landmark antitrust case against Google.

- A new COVID-19 vaccine trial is preparing to get underway in the UK that will see humans deliberately infected with the virus.

Reply
Upvote
Travellers from New Zealand are allowed into Sydney without testing or masks and then travel onto the rest of Australia. Here comes the 3rd wave of infection. This sounds like another bungle to add to the Ruby Princess and Hotel Quarantine.
R
rush 2 years ago

Reply
Upvote
1 upvotes
It will be interesting to see how many watch this debate, I wonder if people will tune in just to watch Trump get muted and see how badly he deals with it!
R
random dude 2 years ago