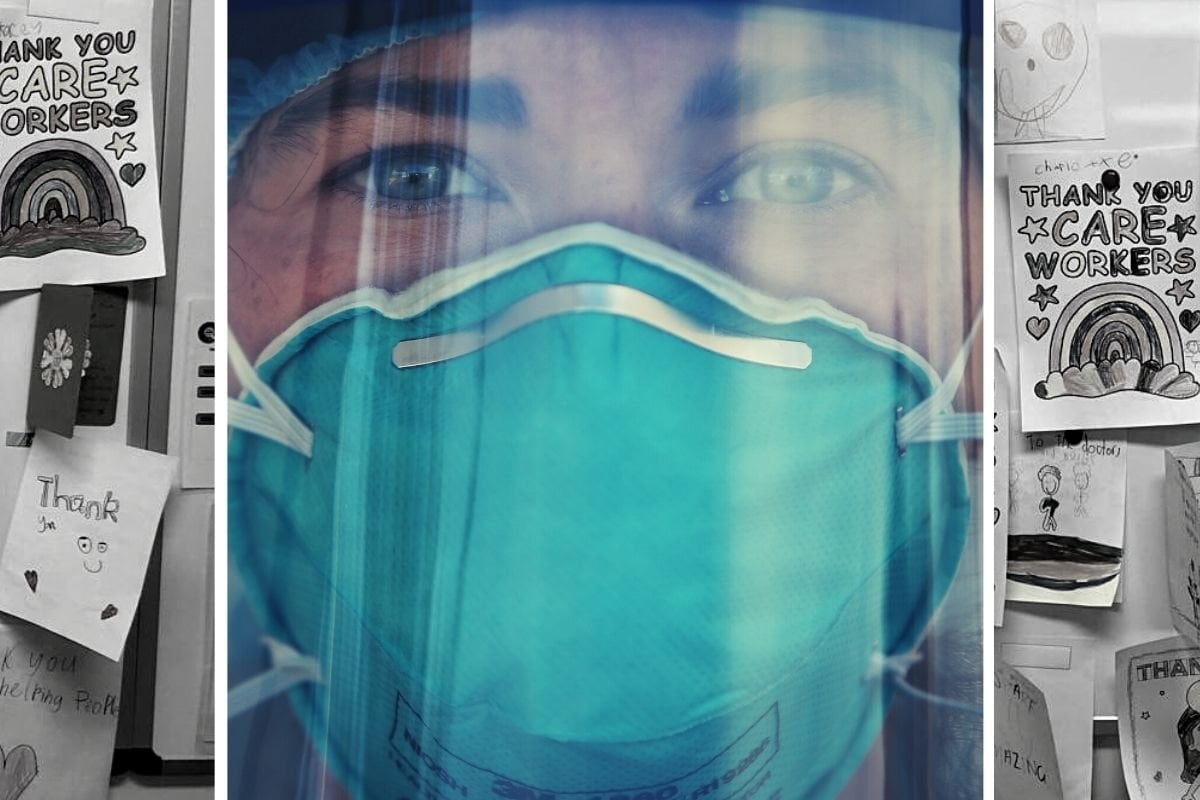 As entire states, cities and LGAs wait with bated breath for the vaccination rate to release them from months-long lockdowns, our hospitals are dealing with the devastation of the fast moving Delta variant.

As Victoria's daily infections surpass those in NSW, we're hearing word from within their COVID ridden ICUs as the hospitalisation rate increases.

"One of the saddest things I've seen over the last few weeks is people wanting the vaccination just before we put them on a life-support machine," Royal Melbourne Hospital ICU Nurse Unit Manager Michelle Spence told Sunday's Victorian press conference.

"They're begging for the vaccination. They're very young. And once we get to that and we're about to put them on life support, it is really too late.

Speaking to ABC News Breakfast this morning, Nurse Spence added that not one of the 18 patients in her ICU are fully vaccinated. She says while there are definitely non-believers in the science of vaccines, there are others who just think "it won't happen to me."

But as she pointed out, one of those in her ICU is a healthy tradesman in his 30s.

ICU nurse Michelle Spence from Royal Melbourne says no one with COVID-19 in Victoria's hospital system is fully vaccinated.

"Today we've got 18 patients with COVID in our ICU ... Out of those 18, ten are on life support and not one is fully vaccinated, not one." pic.twitter.com/sHOsciMAn2

On Sunday Victoria recorded 1,220 new cases and three deaths. On Monday that increased to 1,377 and four deaths in a 24-hour period, with authorities confirming 45 per cent of the latest infections are under the age of 30.

498 people are being treated for coronavirus in Victorian hospitals. Of those, 96 are in intensive care units and 59 are on ventilators.

NSW by way of comparison reported 623 new local coronavirus cases on Monday, as well as the deaths of six people. 959 patients are being treated in NSW hospitals, with 193 in ICU and 97 on ventilators.

While 67 per cent of eligible residents aged 16 and over are fully immunised in NSW, Victorians are behind at 51 per cent.

Vaccination coverage in each age group for each state and territory pic.twitter.com/o8BHn8VlXZ

Professor Greg Dore, an infectious disease physician at Sydney's St Vincent’s Hospital, has told the Sydney Morning Herald rising vaccination rates had “clearly” made an impact on hospitalisation and intensive care numbers in NSW. While the state is under pressure, they are not seeing rates as high as previously predicted and feared for the month of October. However, the healthcare system is bracing for the ramifications of lifted lockdowns in just a week's time.

"We know that there’s a 70 to 90 per cent reduction in hospitalisation with a single dose of AstraZeneca or Pfizer, and that is being reflected in the numbers," said Professor Dore.

In the intensive care unit of Westmead Hospital, where western Sydney's most critically ill COVID-19 patients are fighting for their lives, there are these little messages of hope for our health heroes 🌈💛 pic.twitter.com/4kGTEDZ3PZ

As New South Wales' COVID situation started to deteriorate a few months ago, we started to see pictures from inside the wards.

Photographer Kate Geraghty was invited into St Vincent's ICU to document the devastating impacts of the disease for the Sydney Morning Herald in July.

ABC's 7:30 was invited into the same hospital last month where one patient, an older man, told the broadcaster "it's actually harder than I thought it would be."

"Four times they told me to FaceTime my family and say goodbye," he said. "Goddamn, if people don't believe this is real. It's like something out of a nightmare. This is no joke."

In Sydney's west, 35-year-old Osama told respiratory specialist Lucy Morgan in a video released by NSW Health, "I was close to death. It's terrible," a week-and-a-half into his stay at Westmead Hospital.

Read more: "I had no idea it would hit me this hard". The reality of getting COVID-19 in Sydney right now.

Now, as Victoria's cases continue to climb, we're starting to hear stories of desperation from their Delta frontline too.

On Sunday, Jacqui Harper, the nurse unit manager from the Northern Hospital in Epping said the patients coming through are "seriously, seriously ill."

"The clinical deterioration is so sudden. One minute, sitting in a chair, an hour later they could be saying their goodbyes," she said.

Like Sydney's hospitals, Victorian ones are experiencing 'ramping,' where emergency departments are seeing ambulances queuing for access.

Victoria overtakes NSW with the highest Covid caseload, as an ambulance ramping crisis sparks fears the state’s health system may not cope.https://t.co/nAvYLYhBBp

Both Nurse Spence and Nurse Harper said their respective wards were at, or nearing, full capacity.

Melbourne emergency physician Dr Stephen Parnis told The Today Show, "we know it's going to get worse. The question is how bad will be it."

As Dr Eric Levi explained on Twitter, yes they've had "18 months to prepare" but at the end of the day they're working with an already overstretched and under-funded health system.

"The system has been running at full capacity for years...now throw in a global pandemic...our public health response was not funded and ready for such a major persistent onslaught," he said.

While they are ready and trained and skilled to tackle COVID-19, the system is finite and limited.

This is being said to many health care workers by people in the community, as if we should be ready for whatever onslaught the community is about to throw our way.

Also said as if we had been doing nothing for 18 months.

"COVID care is intensive, extensive and exhaustive. It sucks staff and resources away from other things.

"So the only way to protect yourself and to protect the system from being inundated is through vaccination," said Dr Levi.

It's the persistent message coming out of our struggling healthcare system.

As Nurse Spence reiterated on the ABC:

"We will do everything we can. We will make as many beds as we need to make but we can't do this alone, we need people to do the right thing and take the opportunity, please, to get vaccinated.

Reply
Upvote
3 upvotes
The other aspect that isn't being talked much about is the hostility. As it's largely unvaccinated people getting sick, there is a significant fraction of these people who remain adamantly against vaccination and evidence-based medicine in general, even when they are really unwell. It's really hard to maintain compassion for patients and their families who hate you, who disbelieve everything you say and who frankly are ungrateful for the care they receive. Healthcare and support workers have been and will continue to be verbally and physically assaulted by these kinds of people. It's a disgrace, and devastating for morale.
C
cat 4 months ago