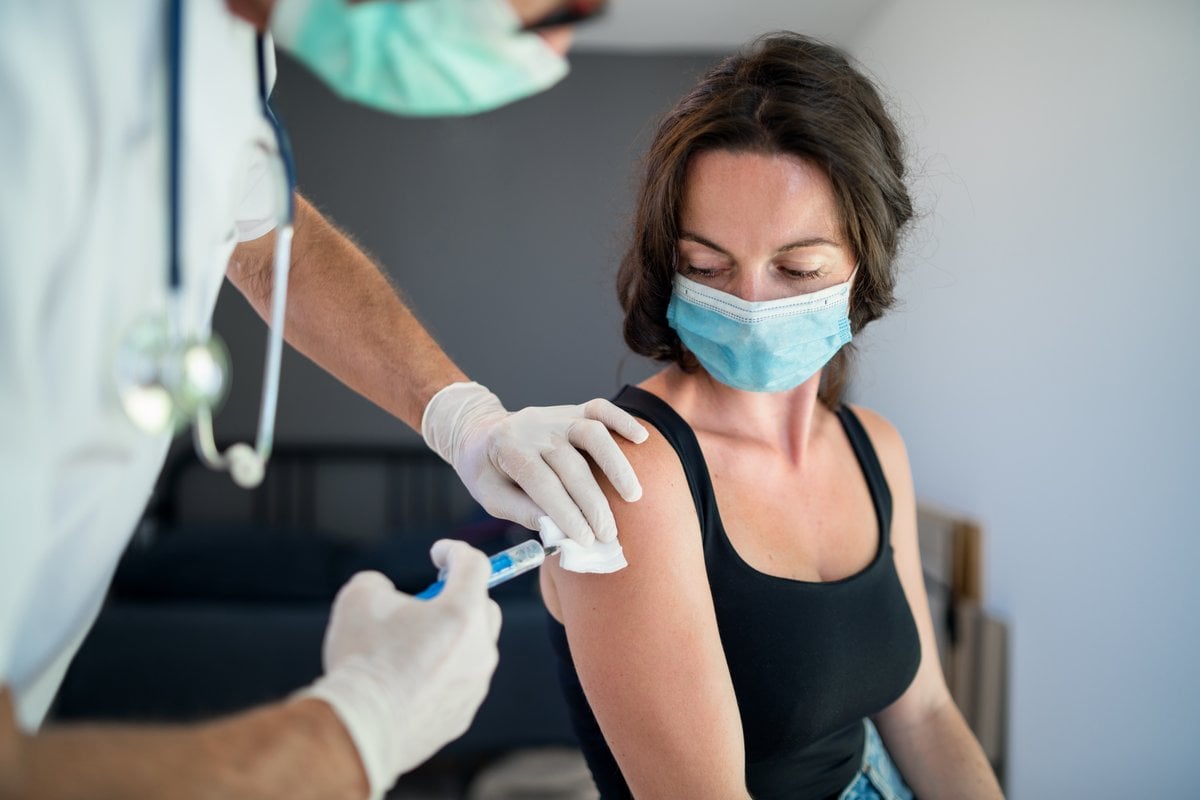 Australian Stefanie Petrides' family all lives overseas, and she hasn't seen them in years.

She's also the mother of a three-year-old, and planning to try for another child.

But with the COVID-19 pandemic keeping her and her family separated for longer than usual, and the uncertainty of travel plans and vaccination timelines - especially if Petrides did fall pregnant - she's feeling torn.

Speaking to Mamamia's daily news podcast The Quicky, Petrides said she was weighing up pausing her baby plans to get vaccinated in the hope of seeing family overseas sooner, or trying for a baby as soon as possible - which could mean possibly pushing back vaccination, and probably the travel that comes with it.

Qantas CEO Alan Joyce said in November the airline would likely require international passengers to prove they have been vaccinated against COVID-19 before boarding their flight.

"[My' family is] spread across Greece, the United Arab Emirates and London, and we all try meet in Greece every few years and that was meant to be 2020. So, it's been quite a while," Petrides explained.

"I'm really torn to be honest with you. If something were to happen to my parents... I would never forgive myself for not going back. I'm just sat here thinking 'please get me on a plane so I can go home and see everyone, I miss them so much.'

"But then again I just don't want to wait too long [to try for a second child] and not be able to conceive or have other issues."

Petrides said with baby number one, she'd had a 'career vs. baby' dilemma. Now, she faced the same, with the added dilemma of a global pandemic and travel restrictions.

"I feel like there's so much on our plate and there's no way it'll line up."

Australia's COVID-19 vaccine roll-out is due to begin in February but it seems a return to 'normality' is still a long way off around the world.

And for many people like Petrides, who are looking to start or expand their family, it may also mean a choice.

A survey by market researcher Roy Morgan of more than 1200 respondents found over three-quarters of Australians say they would be willing to be vaccinated when it becomes publicly available, but most clinical trials into treatments and vaccines against COVID-19 excluded pregnant or breastfeeding women.

This means there is little to no data at all about what the vaccine means for pregnancy.

That's not to say it's dangerous; there is simply just not enough data to say anything at all. The Australian Federal Government has not yet released its vaccine advice for pregnancy.

Listen: The Quicky explores the advice for pregnant women about the COVID-19 vaccine. Post continues below audio.

Dr Sanjaya Senananyake, an infectious disease expert at Australian National University, told The Quicky the best way to learn if the vaccines are definitely safe for pregnant women is through clinical trials - but this process would not allow quick results.

"There's certainly been talk from the lead vaccine makers at this stage of the vaccine development that they would be enrolling pregnant women but I don't know if it's happened just yet," he said.

Dr Senananyake explained there was a very good reason women were not included in trials - after medications thalidomide and diethylstilbestrol caused disastrous side effects and defects for women and babies in the 1960s and 1970s.

"Because of those issues, I think justifiably everyone was concerned about enrolling pregnant women in trials for medications or vaccines and so it just doesn't happen," he said.

"Normally that's not a big issue because we can just do the normal trials without pregnant women, we can take our time and get the results and say 'this looks good in the non-pregnant population, let's start enrolling pregnant women because it's unlikely to be an issue'.

"But of course, COVID has changed the speed in which we're doing things... So we've come to a stage where the vaccines are already being rolled out and we don't have the answer about whether pregnant women should have the vaccines or not." 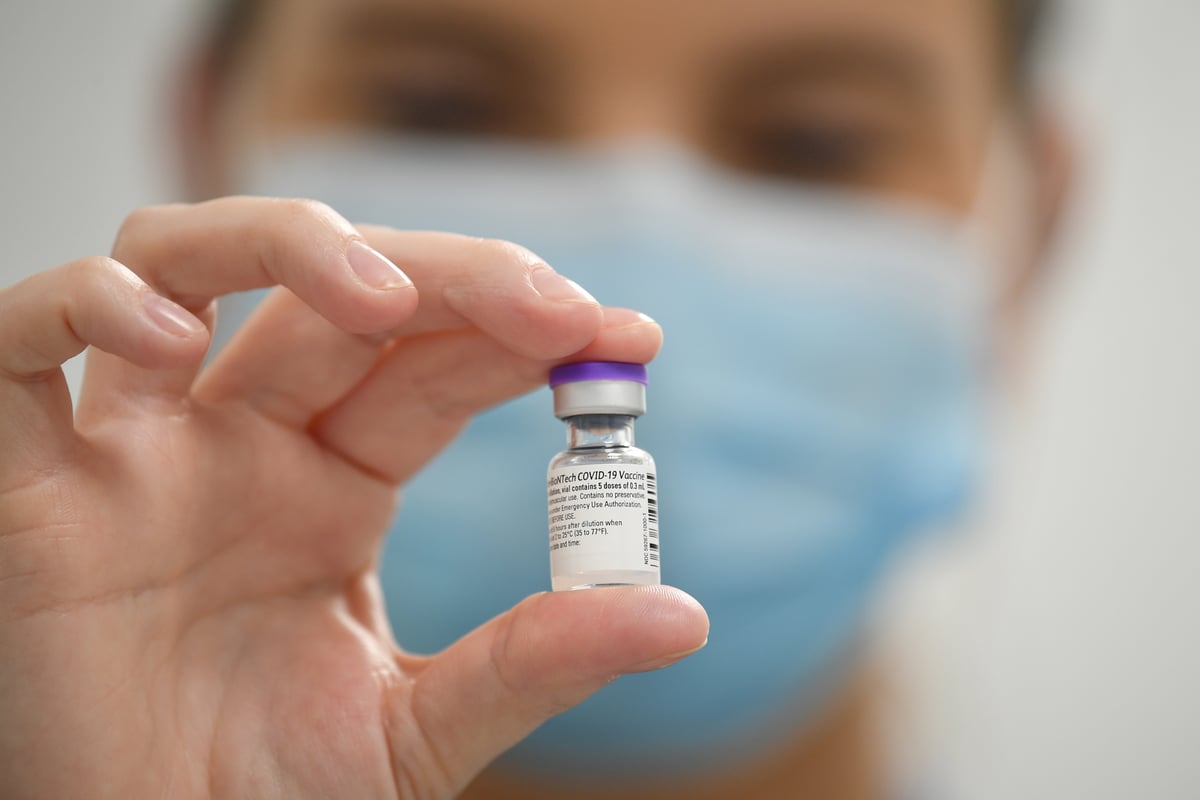 Dr Senananyake said the answer would probably be yes, especially with the Pfizer vaccine which does not include the live virus, but we had to wait for the data to be sure.

Another part of this conversation is that pregnancy puts a person at higher risk of developing severe COVID-19 symptoms and requiring treatment in an intensive care units.

At this stage, there is no strong evidence of long-term impacts on foetuses and babies if the mother gets COVID.

Australia is expected to have its lowest population growth since the first World War, with a drop in migration and a dropping fertility rate.

Melbourne IVF fertility specialist Dr Manuela Toledo told The Quicky people who are currently pregnant, planning to become pregnant, or breastfeeding should discuss their options with their doctor.

"What we have to remember is that this is all very new for all of us, all around the world. The vaccine has only just started being given overseas and we just don't have any long-term studies," Dr Toledo said.

"But we do know that other vaccinations like influenza and tetanus are safe in pregnancy and all the studies to date do not show any adverse short-term effects," she said.

Dr Toledo said more and more data was likely to come in the next few months, but right now the recommendation was to at least consider vaccination and have that conversation with a health care professional.

Reply
Upvote
There’s no data on long term side affects of both covid-19 or it’s vaccine which makes the decision on whether to take it harder. I’m not an anti-vaxxer by any means but the rate in which it has been rolled out is concerning when considering you and your children’s future should you take it.
cat 3 months ago

Reply
Upvote
1 upvotes
@mamamia-user-739637812 there’s a lot of evidence for Covid 19 doing awful lifelong damage to the respiratory system.
The only long term effect of vaccines is immunity. By their nature there’s nothing in them that will have a long term side effect, you either get side effects when you have the vaccine or not at all (The same way that if you gave a virus you’ll get the effects when you’re sick or right after, not a decade later). The Covid vaccines have actually had more trials before than any other vaccine in history before being approved, they’re very safe. And by the time the Australian vaccination program starts millions more people around the world will have had them.
News
General
Opinion
True Crime
Politics
Sport
Explainer
Entertainment
Celebrity
Reality TV
Movies
TV
Books
Rogue
Royal
Lifestyle
Beauty
Fashion
Weddings
Home
Wellness
Health
Fitness
Travel
Food
Parents
Before The Bump
Pregnancy
Baby
Kids
Teens
School
Parent Opinion
Work & Money
Money
Finance
Career
Lady Startup
Relationships
Sex
Dating
Separation
Friendship
Family
Real Life
Couples