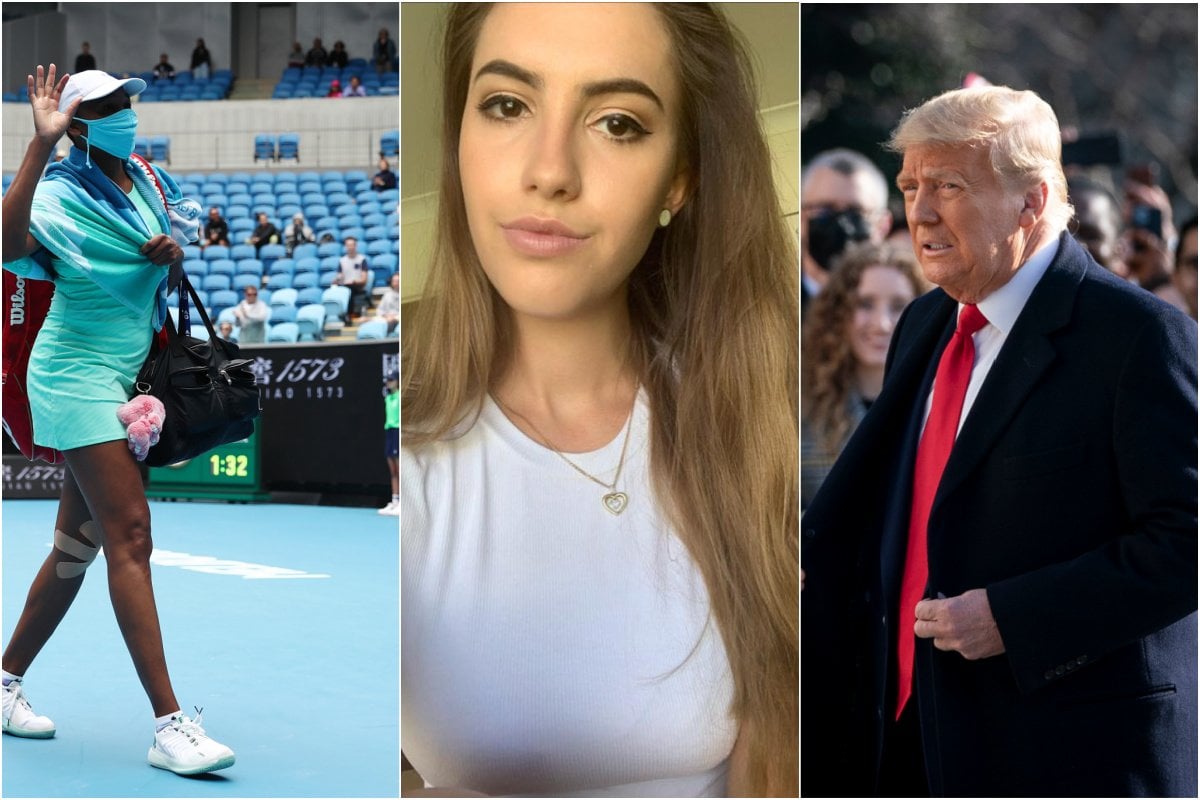 Victoria has embarked on a testing blitz of Melbourne's northwest after a second hotel quarantine worker contracted COVID-19 in less than a week.

More than 100 people, including 12 Australian Defence Force members and nine police officers, have been identified as close contacts of a woman they worked with at the Holiday Inn at Melbourne Airport.

They have been tested and are required to self-isolate for 14 days after their last contact.

Another 17 people, up from 15 earlier on Monday, have been deemed social and household close contacts and will follow the same routine.

Anyone who has visited Tier 1 exposure sites during the specified times must immediately isolate, get a coronavirus (#COVID19) test, and remain isolated for 14 days.#COVID19Vic pic.twitter.com/mYcO48EToA

The authorised officer, aged in her early 50s, had previously tested negative after shifts on Wednesday and Thursday before having two days off.

She tested positive after her shift on Sunday, and has since been working with contact tracers who have identified three potential exposure sites in the city's northwest.

Testing capacity has been ramped near the exposure sites which include a bottle shop, cake shop and clothing store.

A man has been charged with murder over a crash that killed a young woman riding her motorbike near Townsville.

Jennifer Board, 22, died at Thuringowa on Friday night after she was hit by a Holden Statesman, which had allegedly been following a stolen Hyundai sedan during a suspected vigilante pursuit.

A 25-year-old Bushland Beach man was allegedly driving the Holden and he was arrested and charged with murder on Monday, police said.

#BREAKING Man charged with murder over crash that killed Jennifer Board https://t.co/BKwCOm5tsZ

Two 18-year-old men, from Rasmussen and Garbutt, have also been charged over the fatal crash.

The Rasmussen man faces charges of stealing, attempted burglary and unlawful use of a motor vehicle.

All three men are due to face Townsville Magistrates Court on Tuesday after they were arrested separately on Monday.

Relatives and friends have farewelled the young Brisbane couple and their unborn child killed in a shocking January 26 crash.

Kate Leadbetter was pregnant when she and her partner Matt Field were struck by an allegedly stolen car driven by a teenager in Alexandra Hills.

Their families thanked all those who joined them at a private funeral on Monday to say goodbye and the wider community for the support and compassion they received.

A young Brisbane couple and their unborn child have been laid to rest in front of dozens of loved ones and their beloved pet dogs at a moving funeral service.
Report on 7NEWS at 6pm. Family Statement: https://t.co/2aSNRvU9o0 #7NEWS pic.twitter.com/mzXwmLFyuc

"To the first responders and police who looked after Matt, Kate and Miles, and who have supported our families throughout this difficult time, words cannot express the depth of our gratitude for the way you have cared for each and every one of us," the family said in statement said.

"Our families need time together to grieve. Our hearts go out to everyone missing them today, and we thank you for honouring their memories with us."

The families also thanked staff at Iona College who "went to great lengths to help us in farewelling Matt, Kate and Miles today".

Police are awaiting legal advice on whether they can also charge the 17-year-old accused of murdering the Brisbane couple over the death of their unborn child.

He allegedly ran a red light and deliberately collided with a truck at an intersection before the 4WD rolled and ploughed into the couple who were crossing the road.

The teen has been remanded to reappear in court by video link in March.

Illawarra on alert for virus spread.

NSW health authorities have reconfirmed "no quarantine system is without risks" as they track down the potential spread of COVID-19 from a positive traveller.

The person completed 14 days in quarantine at Sydney's Sofitel Wentworth hotel after arriving in Australia from South America, but tested positive to coronavirus two days later.

It is possible the person contracted the virus while in quarantine, with a number of other travellers at the same hotel also testing positive.

"All returned travellers who stayed on the same floor in the Sofitel Wentworth during this time are being contacted by NSW Health contact tracers and requested to be tested," the department said in a statement.

The infected person travelled to the south coast Illawarra region after being released from quarantine on February 2. They visited a number of public venues, including shops, a cafe and pub. The full list of destinations can be found on the NSW Health website.

Some experts have warned that COVID could be spread through hotel ventilation systems.

A Sydney high school teacher will face trial after formally denying engaging in nearly a dozen sexual acts with a student.

Monica Elizabeth Young, 23, is accused of meeting the student at his workplace and other locations and staying in contact over Snapchat over two weeks in mid-2020.

One piece of CCTV footage allegedly shows her moving the boy's hand under a table towards her groin, a court has previously heard.

A Sydney high school teacher will face trial after formally denying engaging in nearly a dozen sexual acts with a student. #7NEWS https://t.co/n5oBsRuBIg

Young on Monday faced the Downing Centre District Court, pleading not guilty to five counts of aggravated sexual intercourse with a boy aged 14 to 16.

A seven-day trial was set down for September 20.

The total crowd at Melbourne Park on the first day of the Australian Open hit 17,922, including day and night sessions in three divided zones.

It was well down on the 64,387 fans that crammed onto the grounds on the opening day of last year's championship but way more than any other grand slam held since then.

Tennis players have responded to the small crowd numbers at the first round of the Australian Open, Serena Williams saying it's better to be playing in front of some crowds than no crowds at all. #9Today pic.twitter.com/zwHINLCUMi

The state government is allowing up to 30,000 people per day into Melbourne Park for the Australian Open, which is less than 50 per cent of capacity.

France's Benoit Paire has criticised Open organisers for their "shameful" treatment of players during quarantine ahead of the Grand Slam event and said lack of training due to strict restrictions had contributed to his first round exit.

Less than 24 hours before Trump's impeachment trial and his lawyers are already calling for dismissal.

Donald Trump's lawyers have blasted the impeachment case against him, saying the former president did not encourage the violence at the US Capitol.

In a sharp-toned legal brief released on Monday, Trump's lawyers said his supporters stormed the building of their own accord and accused Democrats of exploiting the chaos for their party's gain.

Trump's legal team also foreshadowed their intention to challenge the constitutionality of the impeachment trial, which is due to begin Tuesday.

"The intellectual dishonesty and factual vacuity put forth by the House Managers in their trial memorandum only serve to further punctuate the point that this impeachment proceeding was never about seeking justice," Trump lawyers wrote.

"Instead, this was only ever a selfish attempt by Democratic leadership in the House to prey upon the feelings of horror and confusion that fell upon all Americans across the entire political spectrum upon seeing the destruction at the Capitol on January 6 by a few hundred people."

The House prosecutors rejected that argument in their brief filed with the Senate last week.

They argued for Trump's conviction to protect American democracy and national security and to deter any future president who might consider provoking violence in the pursuit of power.

Brady's performance, which earned him the Most Valuable Player award, closed out the most challenging season the NFL has had to navigate because of the COVID-19 pandemic.

Reply with your celebrations from last night! 👇 pic.twitter.com/0jOXiDC5Ed

While the pandemic reined in America's biggest sporting party, the show went on as scheduled.

The NFL championship game had been hyped all week as a battle between Brady, recognised as the greatest quarterback of all-time, and 25-year-old Chiefs counterpart Patrick Mahomes, widely regarded as the best in the game today.

- Amanda Gorman has made history for the second time this year, becoming the first poet to perform at the Super Bowl.

- Indian authorities are racing to save 37 workers who were trapped when a part of a glacier broke off and sent a torrent that's left 18 dead and 165 missing.

- Myanmar's military leader has made his first national address as tens of thousands of people took to the streets for a third day to protest against the coup that overthrew Aung San Suu Kyi's civilian government.