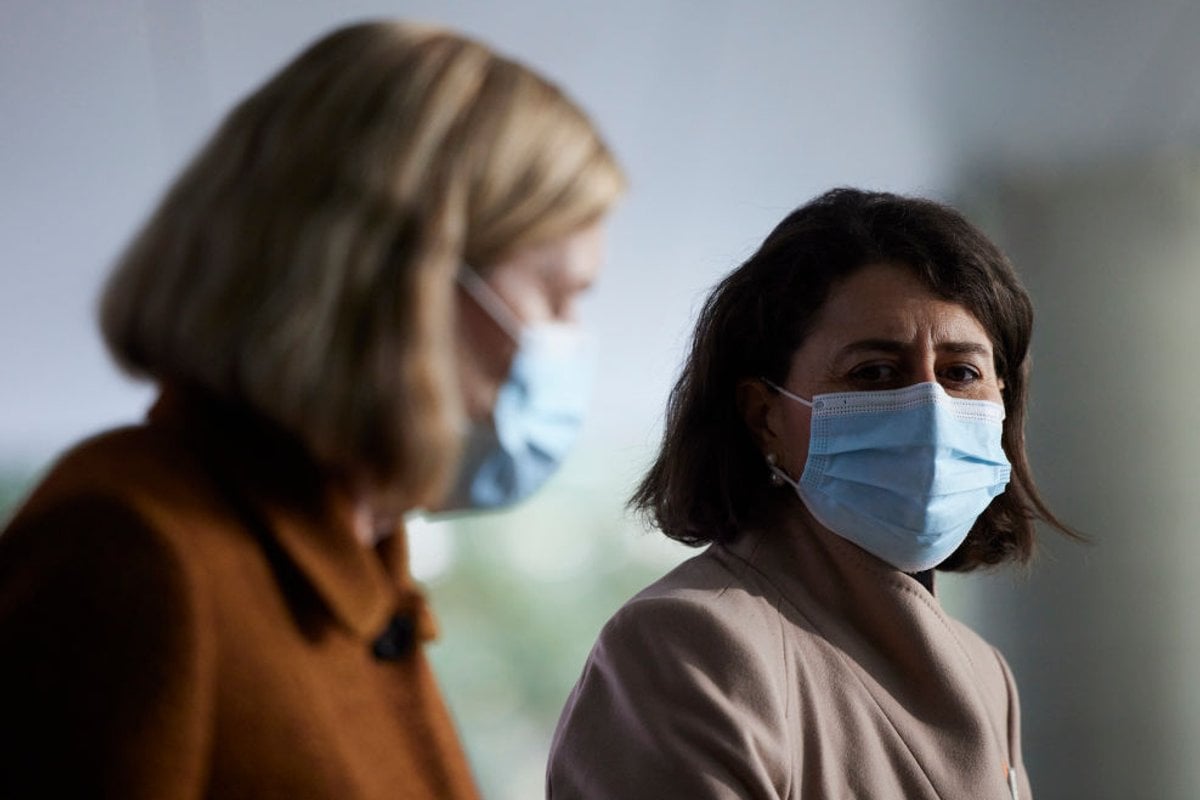 I’ve noticed that hardly anyone uses the phrase ‘we’re all in this together’ this time around.

Because it’s becoming abundantly clear that we aren't.

Watch: Everything that is happening in Sydney right now. Post continues below.

I was at a meeting of NSW teachers when the extended lockdown was announced last week.

In a conversation about their priorities, one said: “My school is in Fairfield so you can imagine what we’re going through right now.”

The meeting paused to offer solidarity, as we contemplated the impossible situation of her and her students.

Even while depleted of resources, they punch above their weight, often out-perform the rest of the state with regards to student improvement.

Their schools are enriched with the most linguistically diverse students in NSW and educate most of Sydney’s students from refugee backgrounds.

In these areas schools’ role in the community goes far beyond teaching and learning.

Often schools fill the function of the state. They’re community hubs for families full of essential workers. They fill the gaps left by socio-economic disadvantage, especially under lockdown when many parents do not have the luxury to work from home.

As usual, the pandemic shines a light all on all the inequities that exist in society and systems.

Meanwhile, teachers in Western Sydney pack resource packs to be sent home, because families need to contend with connectivity issues and shared devices between family members.

Staff at Scots College will cite extra safety measures and outline the ways they have complied government regulations. But the fact remains, it’s one ruled for us, and another rule for them.

To educators in West and South West Sydney the divided Sydney is nothing new.

On this side of the ‘latte line’ teachers have campaigned for equitable funding, building upgrades, shade over playground areas, more casual staff, improved resources including updated IT equipment.

Australia is the fourth most privatised country in the OECD for education, after Mexico, Colombia and Turkey.

High performing education systems such as Finland, Sweden and Norway spend almost nothing on private education, choosing to strengthen the whole sector before propping up individual choice.

The media attention and community anger over special treatment for the wealthy highlights the real danger in a divided Sydney – there is a social divide that is deepening.

Rich, white, wealthy and middle-class Sydneysiders are treated with care and compassion. Multicultural and working class Sydney is a problem to be policed.

What this means for our kids is that Sydney is raising a generation of young men who will grow up to believe that the rules don’t apply to them, that obstacles can be removed for them and their privilege entitles them to more.

At the same time, there’s a generation of children who the government treats with suspicion – all viewed as potential problems and law breakers, based on their postcode.

This pandemic must change far more than our health measures. We have an opportunity to change the pandemic of inequity, and we must take it.

Dr Rachael Jacobs is lectures in Education at Western Sydney University. All views expressed are her own.

Reply
Upvote
3 upvotes
I always have a bit of a giggle when there is an assumption all private =rich and all public=poor. I went to a private catholic school in a very low socio-economic area, very diverse multiculturalist. When I went to uni (i was one of only 3 in my year who got in) and some of the richest kids I have ever met - with parents who were barristers, doctors etc would give me a hard time about being a “private school kid”.
D
daijobou 6 months ago

Reply
Upvote
@daijobou  I think the whole school thing is more reflective of the inequality between different areas too, it’s important to keep this in mind as parents who don’t have a lot of money also deserve a choice in their kids education.
C
cat 6 months ago

Reply
Upvote
@daijobou do they? Im not really sure why any parent needs a choice in their kids education. If a school has decent facilities, good class sizes and a range of subjects, what else matters? If we fully funded the public school system then there wouldn't be any need for choice.
D
daijobou 6 months ago

Reply
Upvote
@cat children are amazing and true individuals, they are whole people who do not fit into a “one fits all approach”. Expecting a teacher to cater for all different personalities and learning styles is completely unfair to both teachers and the kids. No amount of money can alter a child’s personality, a teacher’s personality or a schools culture.
C
cat 6 months ago

Reply
Upvote
1 upvotes
@daijobou apart from sending your child to a montessori school, how do you choose the teaching style or teachers personality? Or the learning styles of the other kids in their class?

Schools don't need to have a culture except that of education and support for students. As far as I can tell "parents having a choice" generally means being able to choose a school that has students from a higher socio economic background. We should focus on making all schools better places, rather than giving parents with funds a choice that others dont have.
D
dav0027 6 months ago

Reply
Upvote
4 upvotes
I don't care if it's federal or state funding 'Private School' defined by it's name should only be funded privately, be that by alumni or parents of students or corporate funding they should not be funded by the government. Parents who can afford to send their children to private schools should if they choose to but for the majority who are unable to do this government schools should be funded in such a way that there is a standard across the state and on some levels across the country which is upheld regardless of whether you are rural or suburban.
G
gypsy 6 months ago

Reply
Upvote
@dav0027 why shouldn't they be funded by the government? It'd be easier if they just funded the same amount per student, no matter where they went.
L
laura__palmer 6 months ago

Reply
Upvote
2 upvotes
@dav0027 100% agree. Public funds should not be used to prop up private businesses, especially at the expense of the public system.
S
snorks 6 months ago