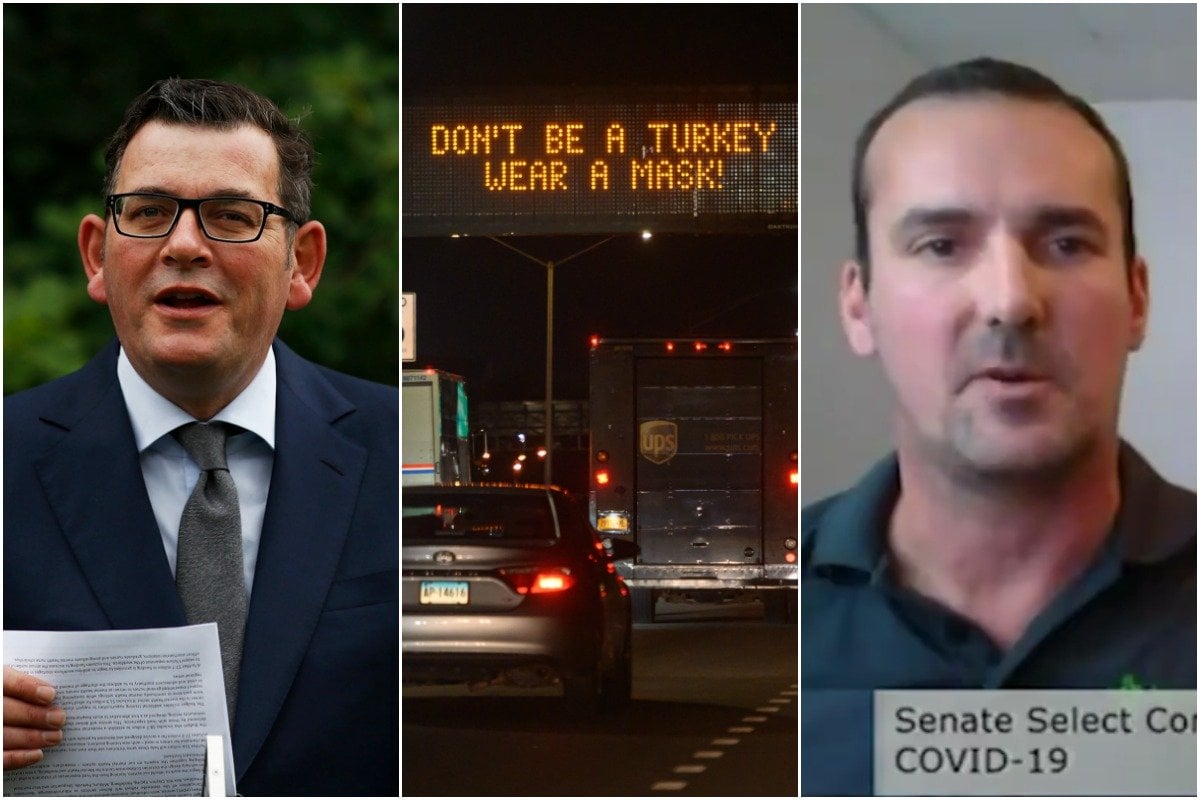 That is despite elimination having never been the state's official strategy against the highly contagious and deadly disease.

Victoria has instead pursued a suppression plan throughout the pandemic, but has managed to meet the official definition of elimination on Friday.

#BREAKING: WE DID IT! 🍩🍩🍩🍩
Victoria has recorded 28 days without a new COVID case. pic.twitter.com/U8gYncZmdB

Health authorities say 28 days with no new cases means the virus has been eliminated from the community, given that period represents two 14-day incubation periods.

The last COVID-19 patient in a Victorian hospital was discharged on Monday, leaving the state without an active case.

Despite this, the Department of Health and Human Services revealed on Thursday afternoon that more virus fragments have been found as part of its wastewater surveillance testing program.

AstraZeneca and Oxford University have acknowledged a manufacturing error raising questions about preliminary results of their experimental COVID-19 vaccine.

A statement describing the problem comes days after the company and university described the shots as "highly effective" and made no mention of why some study participants didn't receive as much vaccine in the first of two shots as expected.

In a surprise, the group of volunteers that got a lower dose seemed to be much better protected than the volunteers who got two full doses.

Combined, the drugmakers said the vaccine appeared to be 70 per cent effective but the way in which the results were arrived at and reported by the companies has led to pointed questions from experts.

Details of the trial results will be published in medical journals and provided to UK regulators so they can decide whether to authorise distribution of the vaccine.

Millions of Americans have defied warnings to stay home for Thanksgiving.

Americans are defying pleas to stay home for Thanksgiving in the face of the surging coronavirus pandemic, triggering fresh warnings from health officials with the release of vaccines still weeks away.

"Life is going to return to normal. I promise you. This will happen. This will not last forever," said the 78-year-old. 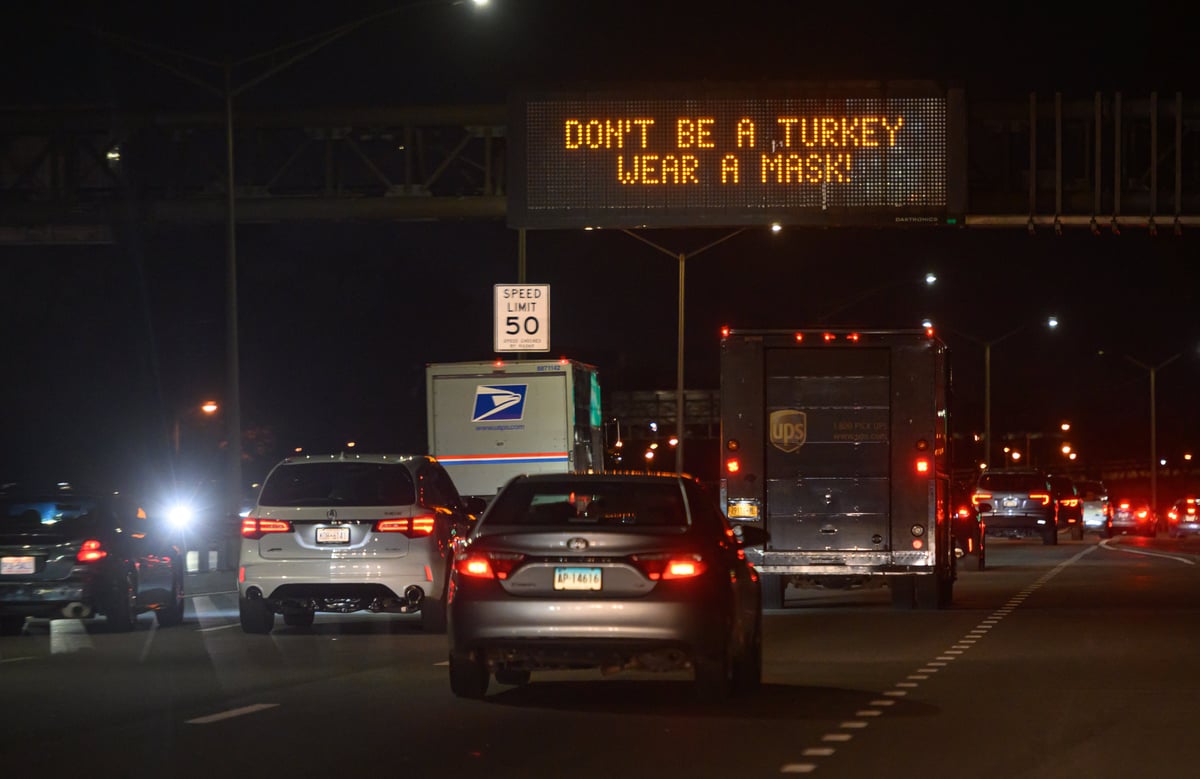 Deaths from COVID-19 surpassed 2000 in a single day for the first time since May on Tuesday and hospitalisations reached a record 88,000 on Wednesday as the country recorded 2.3 million new infections in the past two weeks.

Coronavirus deaths reached 2,157 on Tuesday - one person every 40 seconds - with another 170,000 people infected, as millions of Americans disregarded official warnings and travelled for Thanksgiving.

Nearly a million passengers a day have been screened at airport security checkpoints for the past week, with Sunday's total of 1.047 million being the highest number since the early days of the pandemic in mid-March.

Thailand says it has transferred three Iranians involved in a botched 2012 bomb plot back to Tehran as Iran released Australian academic Kylie Moore-Gilbert who was imprisoned for more than two years on spying charges.

While Thai officials declined to call it a swap and Iran referred to the men as "economic activists," the arrangement freed Moore-Gilbert and resulted in the three men linked to a wider bomb plot targeting Israeli diplomats returning home to a hero's welcome.

The reason for Iran's refusal to name those freed remains unclear.

The plane that carried the men from Bangkok to Iran had a tail number linking it to an Australian private air carrier called Skytraders, which describes itself as a "principal provider of air services to government".

An employee at the company declined to comment when reached by the AP.

Authorities declined to say where Moore-Gilbert was on Thursday, though she thanked Australia's government and diplomats in a statement for securing her release, as well as supporters who campaigned for her freedom.

Despite her ordeal, Moore-Gilbert said she had "nothing but respect, love and admiration for the great nation of Iran and its warm-hearted, generous and brave people."

The PM says he's "always believed in miracles" & describes the release of Kylie Moore-Gilbert as just that. Her employer @unimelb says it's waited a long time for this day.. while Kylie says it's bittersweet to be leaving Iran despite the injustices she's suffered @10NewsFirst pic.twitter.com/fQNNrPYhLo

Asked about the swap, Australian Prime Minister Scott Morrison said he "wouldn't go into those details, confirm them one way or the other".

However, he said he could assure Australians there had been nothing done to prejudice their safety and no prisoners were released in Australia.

An Australian mother has been left heartbroken after her attempts to help hundreds of other families with babies return home elicited silence from the government.

Carly - who is now in hotel quarantine in Australia - organised the campaign from the UK, with about 350 families registered to return.

She found an airline prepared to do the flights but was forced to walk away from the plan after communication attempts to officials outlining the proposal weren't responded to.

Scott Morrison stood up and said stranded Australians would be home by Christmas.

David, Kate, and their son Mitchell are among of the tens of thousands of Aussies overseas let down by that empty promise.

Enough excuses. The Government needs to get it done. pic.twitter.com/1nPWQUqdEn

"It's just heartbreaking for me because I can't get home, I can't get these people home," she told a Senate inquiry on Thursday.

"I feel that I've done everything in my power humanly possible to try and get involved and make a change, and nothing happened."

Some families have since returned, with cots and high chairs not always available in hotel quarantine.

During the course of the pandemic more than 426,000 people have returned, with 30,000 of those on government-facilitated flights.

Department of Foreign Affairs and Trade officials told the inquiry 1.3 per cent of returnees had tested positive for the virus.

About 36,000 Australians want to come home, a steady increase on the 24,000 that were registered with the government in September.

Retired special forces veterans are calling on officials to hold off on stripping unit awards and individual medals for service in Afghanistan.

Inspector-General of the Australian Defence Force Paul Brereton has recommended revoking the citations of thousands of Special Air Service personnel after finding credible evidence of war crimes in Afghanistan.

That includes allegations of 39 unlawful killings and two cases of torture by Australian troops during the conflict, mostly from 2009 to 2013.

A former Special Forces officer has slammed the suggestion medals should be stripped from an entire unit following a damning inquiry into Australia’s Afghanistan operations. #7NEWS https://t.co/8tKjcnmViv

Australian Defence Force chief Angus Campbell has accepted the suggestion and pledged to write to the Governor-General David Hurley.

The ADF will also examine the awarding of individual medals to those accused of wrongdoing.

Ten serving members of the Special Air Service Regiment have been asked, since the report's release, to show why they should not be sacked.

For the first time in more than eight months Victorians will be able to visit Tasmania without having to quarantine.

The island state dropped border restrictions with its mainland counterpart from 12.01am on Friday.

Tasmania has been without a fresh infection for more than 100 days.

"This is a significant milestone," Tasmanian Premier Peter Gutwein said on Thursday.

"We say to our Victorian visitors 'Welcome back' and to Tasmanians living in Victoria 'Welcome home'."

The state is remaining shut to South Australia in the short term as the state's outbreak grew to 31 on Thursday.

Extreme bushfire risk in Adelaide Hills as Australia heats up.

An extreme bushfire risk has been declared for the Adelaide Hills with temperatures expected to soar to 40C and go even higher in some South Australian regional centres.

The Country Fire Service has issued severe bushfire ratings for six other districts on Friday while a severe heatwave has been declared for the northwest pastoral region.

Here's your day-by-day guide to the heatwave that's about to sweep across Australia. pic.twitter.com/Krmu6V9V0v

The Bureau of Meteorology says Adelaide should hit 40C with the mercury to climb to 46C in some outback towns including Oak Valley and Nullarbor, on the west coast.

The extreme heatwave will affect much of southern and eastern Australia, with temperatures expected to soar 15 degrees above average in some areas.

The death toll from the 2019 Whakaari White Island eruption has risen to 22, New Zealand police have confirmed.

Horst Westenfelder, a 64-year-old German national, died on July 2 at an overseas hospital from medical complications while receiving treatment for injuries he received during the eruption, police said.

#BREAKING Police have confirmed Horst Westenfelder, 64, died overseas in July, bringing the number of people who died as a result of the eruption in December last year to 22.https://t.co/H9Eq8e7X10

There were 47 people sightseeing on the privately owned island when the volcano erupted on December 9.

Confirmation of the Westenfelder's death was completed "as soon as practically possible," a police spokesperson said.

A coroner had to rule that the death was due to injuries suffered in the explosion and all relevant parties had to be notified first, police said.

- Weeks after the US election, President Donald Trump is losing tens of thousands of Twitter followers every day.

- Liverpool, Brighton, Chelsea and West Ham will welcome fans back to their stadiums in December under the new UK tier system to combat COVID-19.

- Tens of thousands of fans, many weeping, have filed past the coffin of Diego Maradona, Argentina's most iconic soccer star, following his death this week.