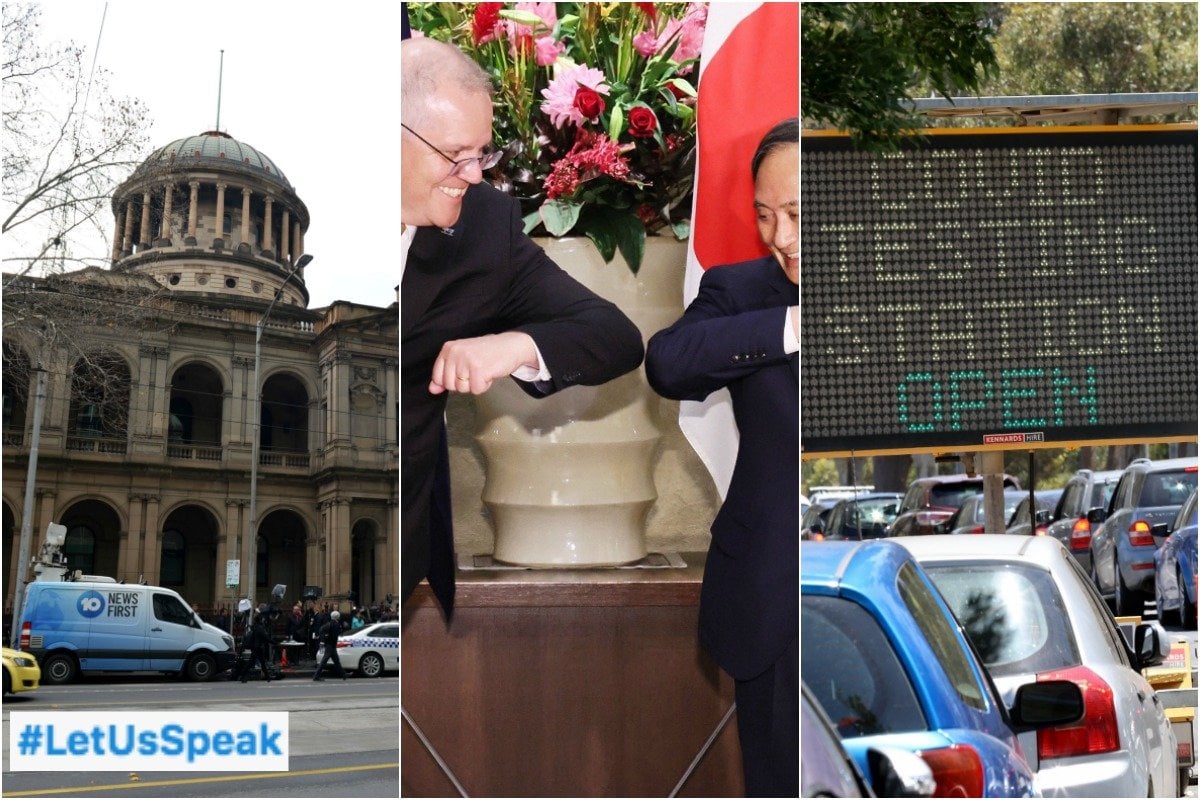 South Australia to shut down for six days.

South Australia Premier Steven Marshall has announced further restrictions in the state in an effort to control a cluster of COVID-19 cases.

The state will go into lockdown for six days, followed by another eight days of continuing restrictions.

"We need this circuit breaker, this community pause. We are at a critical point, but we will get through this," Marshall said.

From midnight all schools will close along with universities, pubs, cafes and food courts.

Regional travel will be banned and aged care centres will go into lockdown.

Factories will close, along with the construction industry.

According to South Australia's Chief Public Health Officer, Nicola Spurrier, the coronavirus cluster in the city's north has grown by two cases to 22.

Federal authorities are keeping a close eye on Adelaide's coronavirus cluster, with more troops preparing to travel to South Australia.

There have been 11,000 tests conducted in the state over the past two days.

Adelaide is scrambling to get on top of a cluster which grew to 20 cases today, with another 14 suspected cases under investigation.

With schools and businesses closing, mass testing and contact tracers working around the clock, the next few days will be critical. pic.twitter.com/EYjtf3NyGZ

Federal Health Minister Greg Hunt has praised South Australians for getting tested, encouraging people without symptoms to also be checked for coronavirus.

SA Health has linked more than a dozen schools, supermarkets, cafes and hotels to its growing outbreak, with a number of new hotspot locations announced last night.

⚠️COVID-19 Health Alert 17 Nov 2020 (11.59pm)⚠️
Anyone who visited or got takeaway (incl. delivery) from the Woodville Pizza Bar on 6 – 16 Nov must immediately self-quarantine for 14 days & seek testing. This includes people who live with you.
More info: https://t.co/DgtxIqU3s6 pic.twitter.com/QveoAXjHlJ

Mr Hunt said there were 100 Australian Defence Force troops on the ground in South Australia, with authorities meeting to map out how much extra support was needed.

They will be deployed immediately after decisions are made.

Mr Hunt said states had been advised by the national panel of medical experts to increase screening for arrivals from Adelaide.

But Queensland, the Northern Territory, Tasmania and WA have slammed the gates shut on South Australia.

NSW and Victoria - which has now gone 18 days without new coronavirus infections or deaths - have increased screening for Adelaide arrivals.

From today, Victorian survivors of sexual assault will once again have ownership of their own stories. They will be able to speak up for themselves and others or to speak out against their offender.

For the last eight months, these men and women have been prevented from telling their stories through the press or social media using their real names courtesy of a controversial law introduced by Victorian Government.

In February 2020, in their effort to bolster the law, the Victorian Government made it an offence for survivors of sexual assault to publish their own identities (by telling their story via social media, for example) without first obtaining a court order.

But following a concerted, coordinated campaign called #LetUsSpeak, that's all due to change.

From Wednesday, the changes will not only be scrapped, but Victorian sexual assault survivors will have more agency than before.

US to slash troop levels in Afghanistan.

President Donald Trump will sharply reduce the number of US forces in Afghanistan from 4500 to 2500 before he leaves office, the Pentagon has announced, stopping short of the complete withdrawal Trump threatened to carry out by Christmas.

Trump's decision to limit himself to a partial withdrawal was first reported by Reuters on Monday and has triggered warnings from critics who say it will undermine security and hurt fragile peace talks with the Taliban.

Listen: What's the worst President Trump can do?

Acting Defence Secretary Christopher Miller, who Trump installed last week after firing Mark Esper, confirmed the drawdown and also outlined a modest withdrawal of forces in Iraq that will reduce troop levels there from 3000 to 2500.

Moments later, the top Republican in the Senate, Majority Leader Mitch McConnell, warned against any major changes in US defence or foreign policy in the next couple of months, including major troop drawdowns in Afghanistan and Iraq.

US and Afghan officials are warning of troubling levels of violence by Taliban insurgents and persistent Taliban links to al-Qaeda.

It was those ties that triggered US military intervention in 2001 following the al-Qaeda September 11 attacks on the United States. Thousands of American and allied troops have died in fighting in Afghanistan since then.

The grief-stricken family of slain Melbourne woman Celeste Manno claims the system failed to protect her after her alleged murder at the hands of an infatuated former co-worker.

A 35-year-old man, believed to be known to her, was arrested and taken to hospital where he remains under police guard.

"One of her team members got fired and she wasn't close with him at all," brother Alessandro told reporters.

A family's raw grief was laid bare today as it grapples to comprehend the senseless death of a bright young woman.

Celeste Manno's father and brothers remembered an amazing person, they fear was murdered by a former colleague. @LanaMurphy #9News pic.twitter.com/SwHKjMNDgW

"But just to give him some support she just walked him out the door and ever since that day he's just been obsessed with her."

They'd even resorted to filing restraining orders as the online harassment mounted, with father Tony telling the media the system let his daughter down.

"What's it going to take for the government to listen. It could be yours (daughter). It's not right. It's got to stop."

READ: Her name was Celeste. She is the 45th woman to be killed by violence in Australia in 2020.

Mr Morrison met with Japanese counterpart Yoshihide Suga in Tokyo on Tuesday, becoming the first world leader to meet with the new prime minister on Japanese soil since he took over from Shinzo Abe.

Mr Morrison and Mr Suga signed the Reciprocal Access Agreement that streamlines each country's use of the other's military bases.

PM Suga: Today I held a summit meeting with Australian Prime Minister Scott Morrison. I am glad that agreement in principle has been reached on the Japan-Australia Reciprocal Access Agreement we have been negotiating (1/2) pic.twitter.com/QaFNjeR9BE

The agreement needs to be ratified by parliament.

If finalised, it would be the first pact by Japan to allow a foreign military presence on its soil after a similar 1960 accord with the United States.

"This is a significant evolution of this relationship, but there is no reason for that to cause any concern elsewhere in the region," Mr Morrison said.

"I think it adds to the stability of the region, which is a good thing."

The RAA has been under negotiation since 2014 with the major sticking point being concerns that an Australian serviceman or woman could face the death penalty if convicted of murder or other serious offences on Japanese territory.

Asked how this issue had been "ironed out", Mr Morrison didn't specify, but said Australia would "meet all of its obligations under its international agreements".

A NSW government proposal allowing homebuyers to pay an annual levy in lieu of stamp duty is an example of tax reform that could benefit all Australians, the state treasurer says.

An average NSW property comes with an up-front $34,000 stamp duty requirement, which takes most people two-and-a-half years to save.

Analysis: The NSW Treasurer's plan to replace stamp duty with a property tax is recognition the state's tax mix is leading to poor economic and social outcomes | @swrighteconomy https://t.co/pLIF8YzhEr

When releasing the 2020/21 budget on Tuesday, Treasurer Dominic Perrottet described the impost as "a relic from a bygone era", adding the climate was right for states to work with the Commonwealth on overhauling some tax systems.

The NSW proposal, which will be open for public feedback until March, would replace stamp duty with an annual tax based on land value, to help more people enter the market.

The government said it could save a buyer $20,000 over the first four years of home ownership.

Three more lawyers representing US President Donald Trump's campaign have asked to withdraw from his lawsuit challenging Pennsylvania's election results on the eve of a major court hearing.

Linda Kerns, John Scott and Douglas Bryan Hughes made the request in a court filing on Monday, adding that the campaign consented to their withdrawal.

In a brief order on Monday night, the judge hearing the case allowed Scott and Hughes to withdraw but not Kerns.

Harrisburg-based lawyer Marc Scaringi has joined the case and will be Trump's lead counsel. He and the three attorneys who sought to withdraw did not immediately respond to requests for comment.

A federal judge in Williamsport will hear arguments on Tuesday in the suit, filed on November 9, which seeks to stop Pennsylvania's top election official certifying Joe Biden the winner.

The Trump campaign is filing lawsuits that are "borderline frivolous" and will not change the election's outcome even if successful, said Bruce Green, a professor of legal ethics at Fordham Law School.

The Australia's Institute's annual Go Home on Time Day report found despite total work-hours falling and much of the workforce shifting to 'work from home', Australians are currently putting in an average 5.25 hours of unpaid work each week.

Economist report Dan Nahum, who authored the report which surveyed more than 1600 workers, said it suggested workplaces were adopting an 'out of sight, out of mind' approach to their duty of care to workers.

- If US drug giant Pfizer gets its vaccine approved, Australia's 10 million doses will be sent in special suitcase-sized containers cooled at sub-zero temperatures of -70C.

- Health data from several countries including India, Italy, Belgium and Germany suggests the rate of new coronavirus infections may be slowing down while restrictions remain in place.

- Police have fired off tear gas in Greece to break up banned gatherings on the anniversary of a 1973 student uprising against the military junta then ruling the country.

- A suspect in the disappearance of Madeleine McCann has suffered two broken ribs in an incident at a German court.

- 41 people have been injured during protests in Thailand's capital Bangkok between anti-government protesters, Thai police and royalist groups.