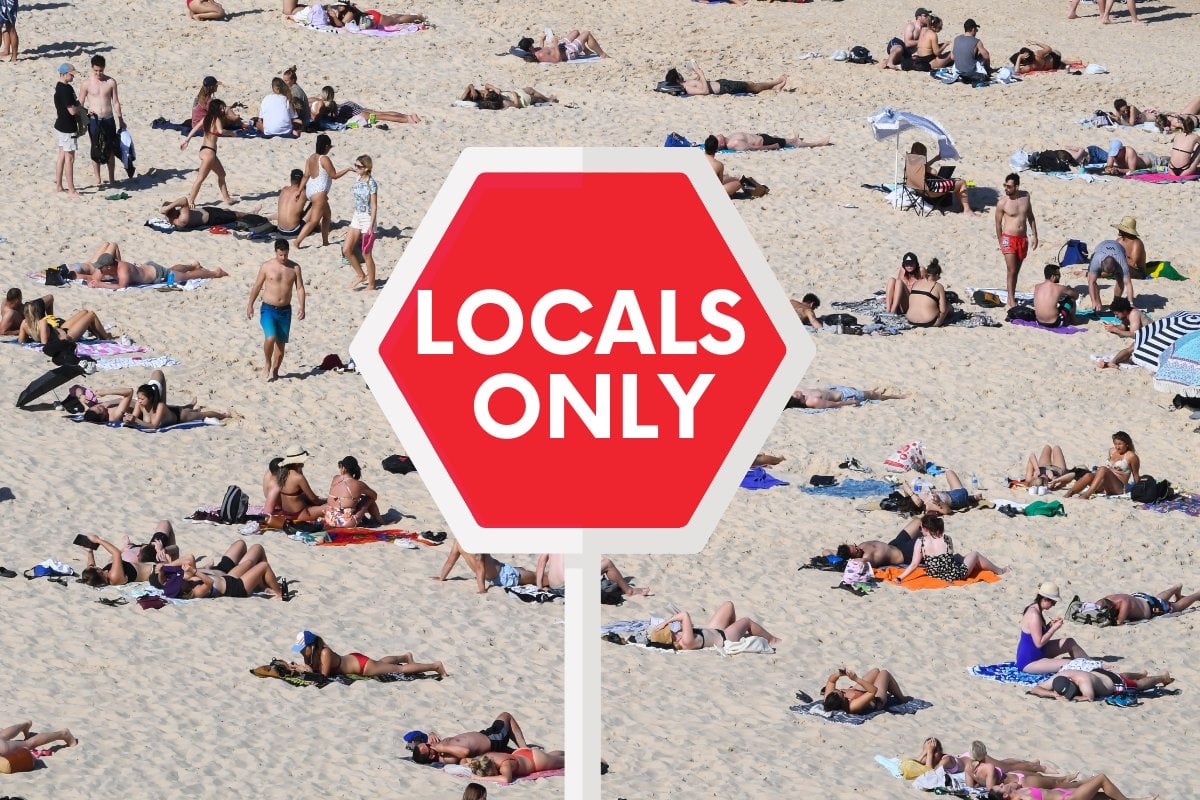 At Sydney's infamous Bondi Beach, a private company are trying to attract and reassure a COVID-savvy crowd by creating a Euro-style beach club. It will admit only those who are prepared to pay $80 for the privilege of spending two hours lying on a sun-lounger and forking over more fist-fulls of cash for food and drinks.

The Amalfi Beach Club's application is being considered by Waverley Council for the second time, but backers hope that there are enough wealthy locals who are pining for overseas holidays to get their plans approved. Charmingly, the club outlined their target market as 'bankers' for men and 'models' for women. So we can see what they have in mind: 1989. And Instagram.

Other councils around the city and the country are grappling with the dilemma of how to keep beaches safe as the weather gets warmer. When people are free to move around during a global pandemic, how do you stop them from moving towards the coast? Plans include closing car-parks, introducing time-limits, COVID marshalls galore and constant drone surveillance.

Put to the test in Sydney last weekend, it's going to be a careful dance of discouraging new arrivals, fast turnovers, and limiting numbers in every which way.

But really, what a lot of locals are whispering on community Facebook groups, scrawling on hastily-made signs and spray-painting on rocks is the same message the Amalfi Beach Club people hold deep down: Don't come. Our beaches aren't for you. 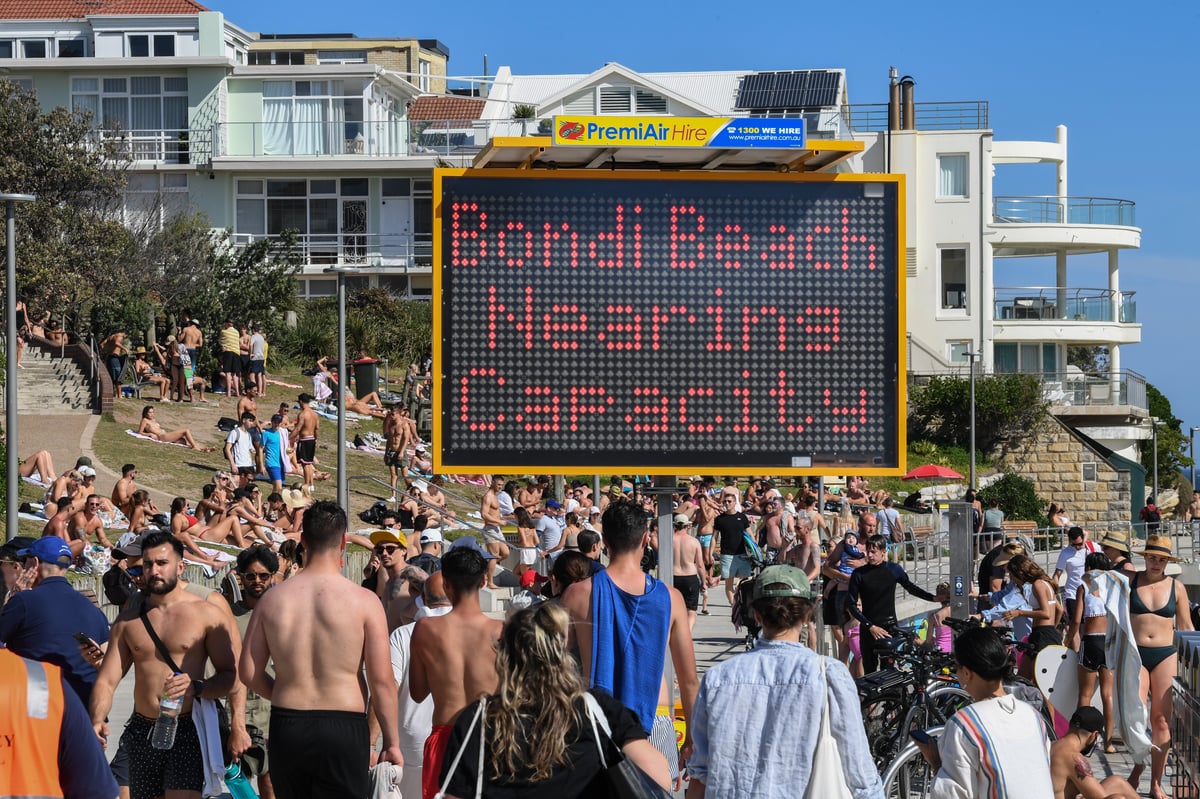 It seems that the once spray-painted command of territorial surfers is now, in fact, all of us.

Western Australians will be keeping their enormous state to themselves until at least April, thank you very much.

Queensland will be sealing its gateway to NSW until the southern state can offer a convincing 28-day "clean" bill of health.

Tasmania hasn't let in any outsiders since August.

Our international borders will remain welded shut - even to 'locals' stranded overseas - for the foreseeable future.

Immigration is predicted to be at a standstill for the next two years.

Listen to Holly, Mia and Jessie talk about the weird and wonderful COVID happenings in the States. Post continues after podcast.

It's all smart science. Containment. Manageable control of an unpredictable pandemic.

But it's also fanning the flames of localism in an entirely new way. State leaders are sledging each other, blame is settling in places it doesn't belong, responsibilities are being passed, not shared.

It's interesting to consider what all these sealed entries will do to our national psyche long-term, and it's being played out, in micro, on our beaches.

Those of us who came from other, less genetically-blessed, parts of the world pinch ourselves about cities like Sydney, with its towering skyscrapers beside glittering blue oceans, culture and community alongside some of the most beautiful stretches of sand in the world.

The fact much of it - clifftop parks, ocean baths and surf beaches - is public space, accessible to all, is one of Australia's great badges of honour, a source of international pride.

Only a tiny percentage of Australians live at the beach, but the vast majority of us live in proximity to it, huddled at the edges of our enormous island, jostling to get closer to the status-symbol that is a glimpse of sand and sea.

Going there, on a stinking hot day, for splashing and sand-sleeping and ice-cream and hot chips with our cold drinks and clogged sunscreen nozzles and all manner of things to put on a public barbecue, is part of a well-worn Australian dream - a cliche because it's true. It's supposed to be a leveller, the sand, but since the fences and tape went up and came down, we're left with a problem - and a numbers game.

Surely, ultimately the choice is binary - the beaches are open to everyone or no-one.

Your postcode or your credit-card limit shouldn't be your ticket to open space that's really owned by no-one.

Australia's city beaches are not the place for exclusive clubs to get around the regulations, nor for Locals Only pleas dressed up as sensible concerns.

A side-effect of solid public health policy can't be a shrinking of minds, reduced tolerance and a growing sense of entitlement for something earned only through privilege and fortune.

That's just piling another tiny tragedy on top of so many others in 2020.

Reply
Upvote
They should do it as a lottery, like spaces for New Years Eve. Or allocate each household certain dates they’re allowed to access the beach- those of us who can happily go without will make a fortune selling our spaces to desperate Bondi people.
G
grumpier monster a year ago

Reply
Upvote
1 upvotes
I don’t agree with the beach club. On the other hand I live near a Melbourne beach. I only have half a 5 km circle because the other half is the sea.  It irks me that people travel outside their zones to crowd into my restricted zone. I know I’m lucky to be so close to the beach but I’ve sacrificed half my zone to have it.
M
mamamia-user-482898552 a year ago