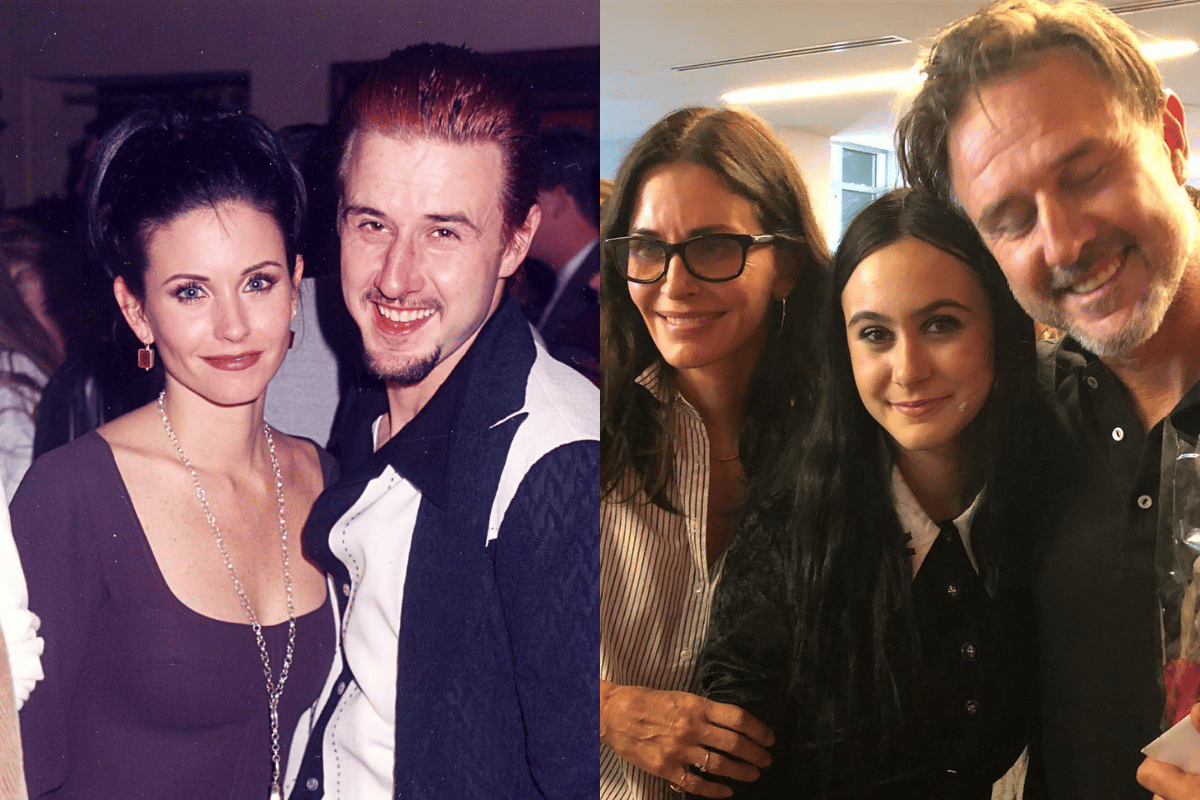 This post discusses miscarriage and could be triggering for some readers.

Scream co-stars Courtney Cox and David Arquette were once Hollywood's most unlikely couple.

Since meeting at the movie's pre-party, the pair have married, divorced and now co-parent their 17-year-old daughter, Coco.

While both actors prefer to live a life that is relatively private, the pair have had quite the whirlwind marriage and separation that has somehow led them right back to where they began; acting alongside each other in Scream 5.

Cox and Arquette first met at a pre-party before filming began for the slasher thriller film Scream in 1996 - and while 50-year-old Arquette knew it was 'love at first sight' for him, the same couldn't be said for Cox, who played level-headed reporter 'Gale Weathers'.

"For me it was, but not for her. I had to trick her," he revealed to Bang Media, via Digital Spy, in 2009. "We met at a pre-party before we started filming Scream. I was being a little cocky and Courteney was like, ‘Ah, I’ve heard of you,’ and we just kept flirting for a while. She’s just so gorgeous and she jokes around so much." 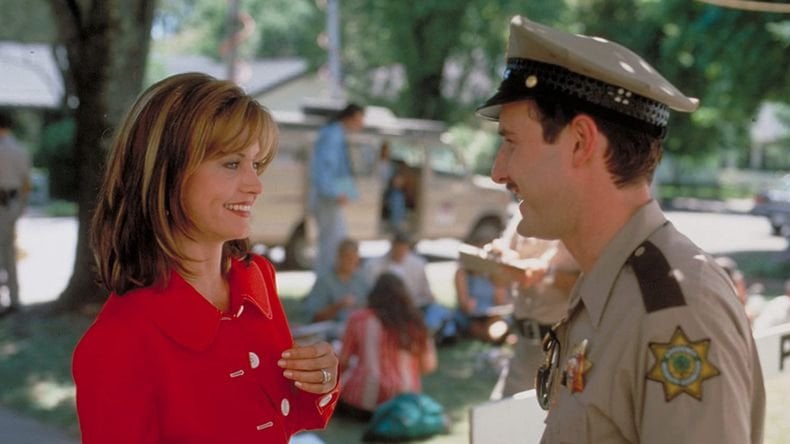 Cox, 57, admitted she initially was terrified by her on-screen co-star who played the dopey 'Deputy Dewey Riley'.

"I was intimidated by David," she explained. "He has lived many, many lives I think. He is a worldly boy. He has done more things in his young years than I have in my whole life. So he taught me a lot."

By 1998, Arquette had proposed to Cox and in 1999, the pair were married in a reportedly extravagant ceremony in San Francisco. 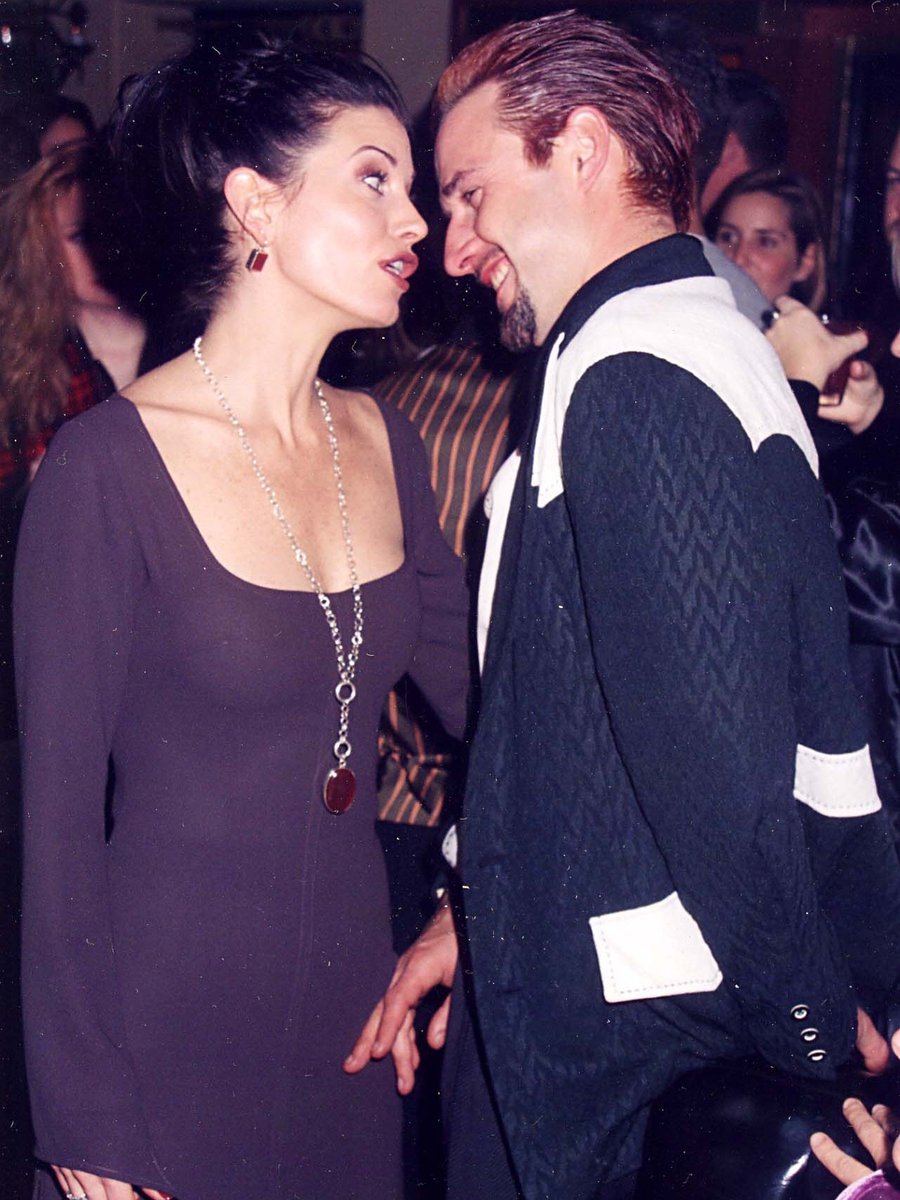 Courtney Cox and David Arquette at the Scream Movie Premier in 1996. Image: Getty.

Following their marriage, the pair were open about their attempts to have children together, with Cox admitting she'd sadly miscarried "quite a few times" due to a genetic mutation which resulted in her own antibodies attacking the fetus within her body.

Speaking to NBC in 2004, she revealed the difficulties in having to play a comedic character, while dealing with her own personal struggles.

"I remember one time I just had a miscarriage and Rachel (played by Jennifer Aniston) was giving birth. It was like that same time," she explained.

"Oh my God, it was terrible having to be funny."

After two rounds of IVF, Cox and Arquette went on to welcome their daughter in 2004, Coco, who is now 17-years-old.

Cox said: "I had a lot of miscarriages and I don't think that's something people shouldn't talk about because it's… unfortunate, but it happens.

"I just think it's important to get things out there so people can realise they're not alone."

On becoming a father, Arquette said in 2019: "To me, once you have that kid, it sort of redefines your understanding of love. And it just sort of like I don't know, it gives you a new perspective on life..." 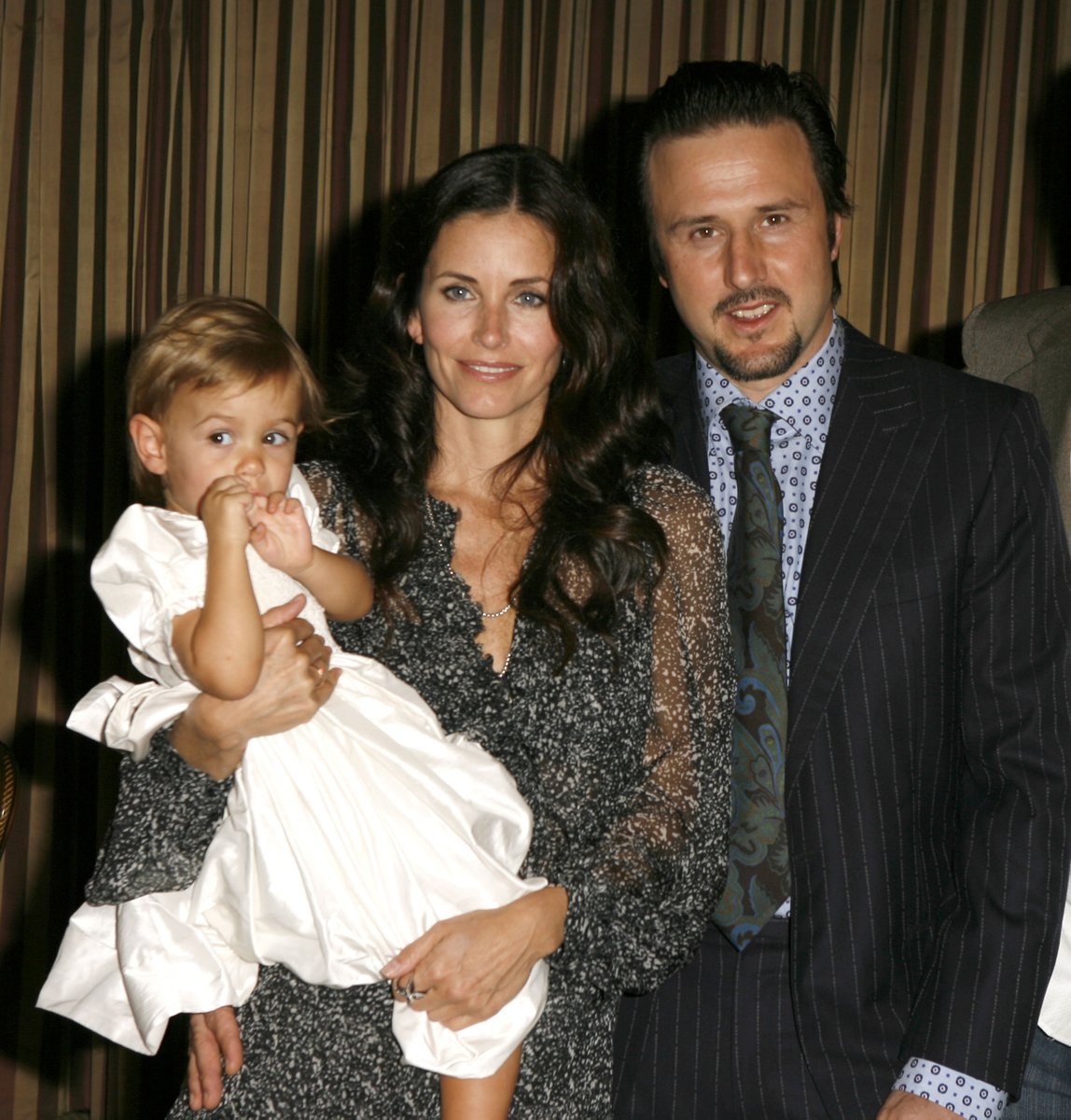 Courtney Cox and David Arquette with their daughter, Coco in 2006. Image: Getty.

A few years into the pair's marriage, cracks began to show, but they were determined to try to work it out.

"We've done couples therapy in the past. We're not lazy about our marriage. We have the same arguments we've had for years," Cox and Arquette said in a joint statement, back in 2011.

"We have agreed to a trial separation that dates back for some time. The reason for this separation is to better understand ourselves and the qualities we need in a partner and for our marriage. We remain best friends and responsible parents to our daughter and we still love each other deeply."

In 2012, it was reported Cox officially filed for divorce from Arquette, confessing to Howard Stern she and her partner were "completely the opposite".

"There are a lot of things that David likes to do completely the opposite things I do," she said. "I don't want to inhibit him in his life. He really is a very gregarious guy, he's very outgoing. I'm much more of an introvert."

On his part, Arquette told Howard Stern in 2011 during a joint interview, that Cox had grown tired of his antics and didn't want to "mother" him any longer.

Cox went on to explain her ex-husband's insatiable sex drive also drove a wedge between them.

While on a trip to Disney World with their then-six-year-old, she said he'd tried to make a move on her.

"It was early in the morning. This is one of our problems in our relationship. Whenever I would need consoling from David, he could not literally put his arm around me for one second without completely getting a boner," she said. "So [Disney World] just wasn't the right time and I don't want to confuse the issue. We're going through a hard time."

The pair finalised their divorce in 2013, after 14 years of marriage.

Since then, both actors have gone on to date other people, with Arquette finding love again with 33-year-old entertainment host Courtney McLarty who he met at a Camp Playboy event at Comic-Con. 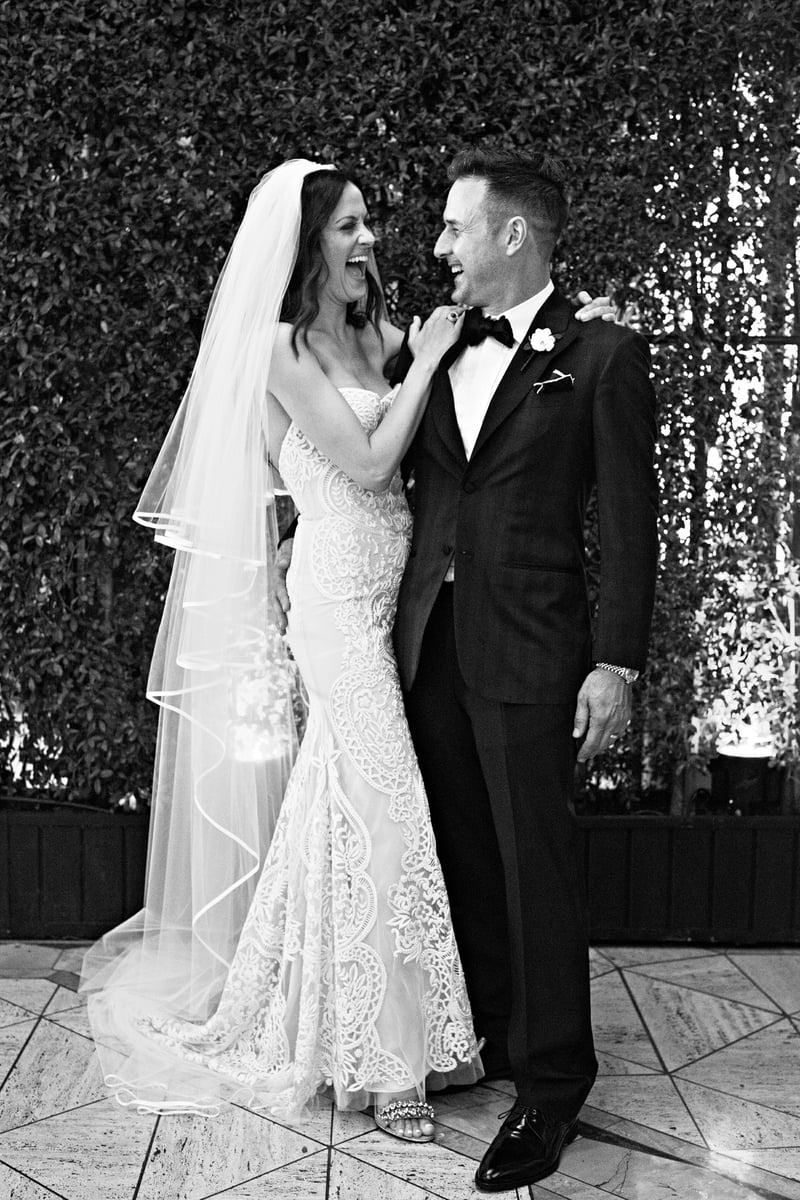 Cox went on to find love again as well, with musician and Snow Patrol band member Johnny McDaid, in 2013.

They initially were engaged just nine months into their relationship, then called it quits in 2015.

However by 2016, the pair had reconciled and have been going strong ever since.

During an interview on Jimmy Kimmel Live! in January 2019, Cox said: "He's my guy. He's my one. But saying 'partner' is difficult for me.

Despite their differences, Cox and Arquette still remain close and co-parent their daughter Coco.

Arquette told Yahoo! Entertainment he and his ex-wife still have a "great relationship".

"We're co-parents to our daughter who's 16, so we have a really great relationship," he explained. "We're friends, and we've communicated a lot because of Coco."

He added they've always remained supportive of eachother despite their public relationship and subsequent divorce.

Last year, Cox and Arquette reprised their roles as 'Gail Weathers' and 'Dewey Riley', starring together in the fifth Scream film in the franchise, out in January.

Arquette told ET back in 2020 he was excited to work with his ex-wife.

"We always love working together," he explained. "She's an incredible actress, so it'll be fun to bring these characters back to life and see where they're at."

When Cox and her former partner worked together in 2011, she was adamant they were "the closest of friends".

"The thing is David and I love each other so much and we get along so well," she said at the time. "I love him so much. We are the closest of friends. I would say we're probably better now than we were during that movie. The movie was just a little bit of a tough time. I don't have the fondest memories of those particular moments during that film."

She went on to add: "We did have a great time no matter what, but there were some awkward moments. I don't remember us ever getting into a fight. It wasn't like that."

"We've moved past that phase. Some times were really fun. Some times we had a ball there! But it definitely was the beginning of some issues."