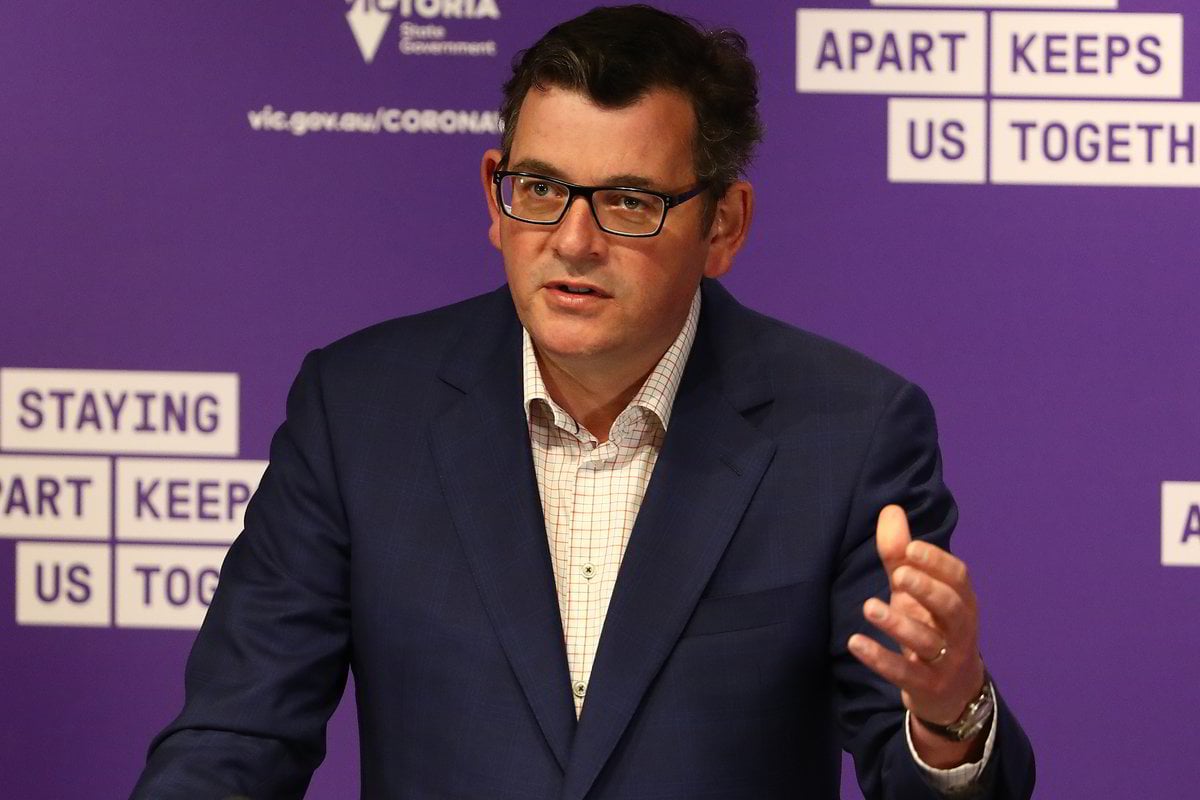 Victoria's State of Emergency and State of Disaster has been extended for another four weeks.

On Sunday, Victorian Premier Daniel Andrews announced both the State of Disaster and State of Emergency will be continued and will now end at 11.59pm on October 11.

"It underpins all the different rules. It underpins taking those safe and steady steps," said the Premier.

Victoria entered a State of Disaster on August 2 to ﻿coincide with stage four restrictions. It was bought in on top of the State of Emergency.

Lisa Neville, Minister for Police and Emergency Services said the State of Disaster won't be in place "a moment longer than it needs to be". ﻿

"We are at a critical point right now. And we have to do everything we can to hold onto the gains we've made, which means giving Victoria Police everything they need to enforce the Chief Health Officer's directions as we keep driving down cases," she said.

During this pandemic, the state of emergency has granted the Chief Health Officer Brett Sutton significant power to restrict people’s movements to slow the spread of COVID-19. From mandatory face coverings to ordering the closure of non-essential services, the State of Emergency is the 'legal instrument' that allows these restrictions to take place.

Victoria has recorded seven more deaths and 41 news cases of coronavirus, as metropolitan Melbourne remains in stage four lockdown for the next two weeks.

The figures released on Sunday for the past 24 hours take the state's death toll to 723 and the national count to 810 since the start of the pandemic.

The number of new diagnoses keeps the state on track for its plan to ease lockdown restrictions in coming weeks. Regional Victoria is expected to ease its restrictions within days.

As that occurs, Premier Daniel Andrews said road checkpoints may be stepped up to make sure Melburnians don't escape to regional Victoria.

On Sunday News Corp released footage of a woman being dragged from her car by a police officer at a vehicle checkpoint about 45km north of Melbourne.

The footage suggests she had refused to give her name to the officer and was subsequently forcibly removed from the car after refusing to get out herself, saying she felt unsafe.

Victoria's two weeks of low infection rates has prompted Mr Andrews to indicate the possibility that regional Victoria could jump two steps out of lockdown by mid-next week.

This will mean, among other things, that regional residents would very soon be able to go out for a coffee or meal.

He said he wasn't worried about Melbourne residents trying to get to regional areas because travel limits of 5km are still in place in the city for some time.

But he said police checkpoints on key roads out of Melbourne could be bolstered to ensure compliance.

"It may go to a new level to make sure that only those who absolutely need to be travelling into country Victoria are doing that," he said.

Oxford University has announced it is resuming their trial for a coronavirus vaccine it is developing with pharmaceutical company AstraZeneca, a move that comes days after the study was suspended following a reported side-effect in a UK patient.

In a statement on Saturday, the university confirmed the restart across all of its UK clinical trial sites after regulators gave the go-ahead following the pause on Sunday.

"The independent review process has concluded and following the recommendations of both the independent safety review committee and the UK regulator, the MHRA, the trials will recommence in the UK," it said.

The vaccine being developed by Oxford and AstraZeneca is widely perceived to be one of the strongest contenders among the dozens of coronavirus vaccines in various stages of testing around the world.

Watch: How to have a conversation with anti-vaxxers. Post continues below.

British Health Secretary Matt Hancock welcomed the restart, saying in a tweet that it was "good news for everyone" that the trial is "back up and running."

The university said in large trials such as this "it is expected that some participants will become unwell and every case must be carefully evaluated to ensure careful assessment of safety".

It said globally some 18,000 people have received its vaccine so far. Volunteers from some of the worst affected countries - Britain, Brazil, South Africa and the US - are taking part in the trial.

Although Oxford would not disclose information about the patient's illness due to participant confidentiality, an AstraZeneca spokesman said earlier this week that a woman had developed severe neurological symptoms that prompted the pause.

Specifically, the woman is said to have developed symptoms consistent with transverse myelitis, a rare inflammation of the spinal cord.

The university insisted that it is "committed to the safety of our participants and the highest standards of conduct in our studies and will continue to monitor safety closely".

Pauses in drug trials are commonplace but the temporary hold led to a sharp fall in AstraZeneca's share price following the announcement on Tuesday. 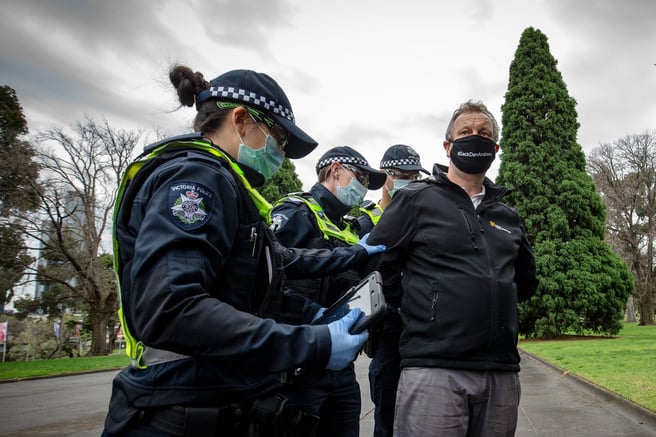 A man is detained by police during an anti-lockdown rally on September 12, 2020 in Melbourne, Australia. Image: Getty.

Police say they visited 90 people of interest in the preceding days and urged them not to participate.

Some walkers on the shores of the city's Yarra River on Saturday stopped and displayed signs, including "I am just exercising my human rights".

An AAP photographer witnessed three people, some in handcuffs, being led away by police, while officers directed others to move on.

There were no groups gathered and the number of people out walking - which is permitted for exercise - were outweighed by a heavy police presence.

Social media organisers of the so-called 'Freedom Walk' suggested there might be similar actions in other locations.

Promotion of the main Melbourne event was taken down earlier in the week by Facebook.

An anti-lockdown rally was held at the Shrine of Remembrance last weekend resulting in 17 arrests and more than 160 fines being issued for breaching health directions.