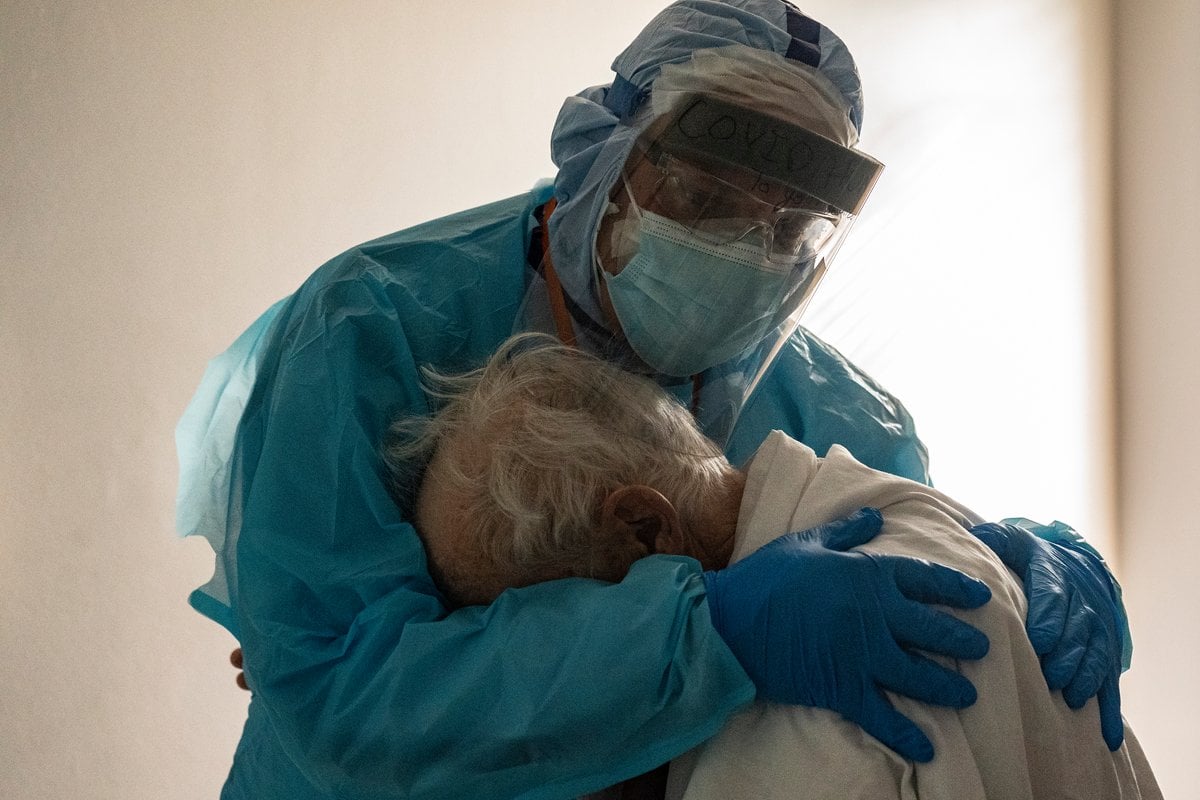 It's been nearly one year since COVID-19 was first detected in Wuhan, China. Since then, there's been over 72 million global infections and more than 1.6 million deaths in a pandemic that has upended the daily life of billions.

The largest contributor to the global case numbers and death toll is America, who is currently experiencing a surge in infections.

Although a vaccine has now been approved, experts warn it will be months until 'herd immunity' is achieved, so continue to urge everyone in America to still wear masks and physically distance to protect themselves from the invisible killer.

Watch: A 'thank you' to masks. Post continues below.

Here's what you need to know about the state of America right now.

In April, New York City made headlines when their accumulative death toll from the pandemic surpassed the death toll of the 9/11 terrorist attack, which killed 2,977 people. Now, America is on track to average more coronavirus deaths than 9/11 every day for the next few months.

It comes after the country saw their highest one-day total yet last Wednesday, with 3,124 deaths, according to Johns Hopkins University.

"Probably for the next 60 to 90 days, we're going to have more deaths per day than we had on 9/11 or we had at Pearl Harbour," Dr Robert Redfield, director of the US Centres for Disease Control and Prevention, told the Council on Foreign Relations on Thursday.

"The reality is the vaccine approval this week is not going to really impact that, I think, to any degree for the next 60 days," Redfield said.

If his predictions are correct, another 180,000 people will die at least in America. Already nearly 300,000 have died from the virus - exceeding the total number of American soldiers who died during World War II.

America is now averaging around 200,000 new cases of COVID-19 every day - well over one million new cases every week.

This is nearly sixfold the number of new cases that were being every day just three months ago, according to The New York Times. An epidemiologist told the publication the "worst is yet to come," as the country will likely see the cases grow further following the Thanksgiving holiday.

3. Black Americans are dying from COVID-19 at nearly triple the rate of white people.

Ethnic communities have been disproportionately impacted by the coronavirus pandemic in America.

The nonpartisan APM Research Lab has found Black, Indigenous and Latino Americans all have a COVID-19 death rate of more than 2.7 times that of White Americans.

4. Goal is to have 20 million Americans vaccinated against coronavirus by the end of year.

In the less than three weeks left of this year, American officials have the goal to vaccinate 20 million people, according to Vice President Mike Pence.

The first vaccine was approved last Friday by the US Food and Drug Administration in what marks the biggest vaccination effort in US history.

The Pfizer vaccine is a two-dose regimen delivered 21 days apart, and is deemed 95 per cent effective in preventing the infection of COVID-19.

Among the first to receive the vaccine in America will be health care workers and residents of long-term care facilities.

5. Black Americans are less likely to get the vaccine.

A Pew Research survey found 60 per cent of Americans say they would definitely or probably get a vaccine for COVID-19. They also found 21 per cent of U.S. adults said they would not.

Black Americans seem most hesitant to get vaccinated, according to the Pew Research survey, with only 42 per cent saying they would do so, compared to 61 per cent of White adults.

The APM research lab says "this skepticism may be rooted in historically-based distrust of the medical system".

This survey raises concern for health authorities, considering Black Americans are disproportionately dying from the disease.

Reply
Upvote
1 upvotes
I can understand black Americans being hesitant with the some of the crap their government has done in the past by I hope they can get on board to hit herd immunity.