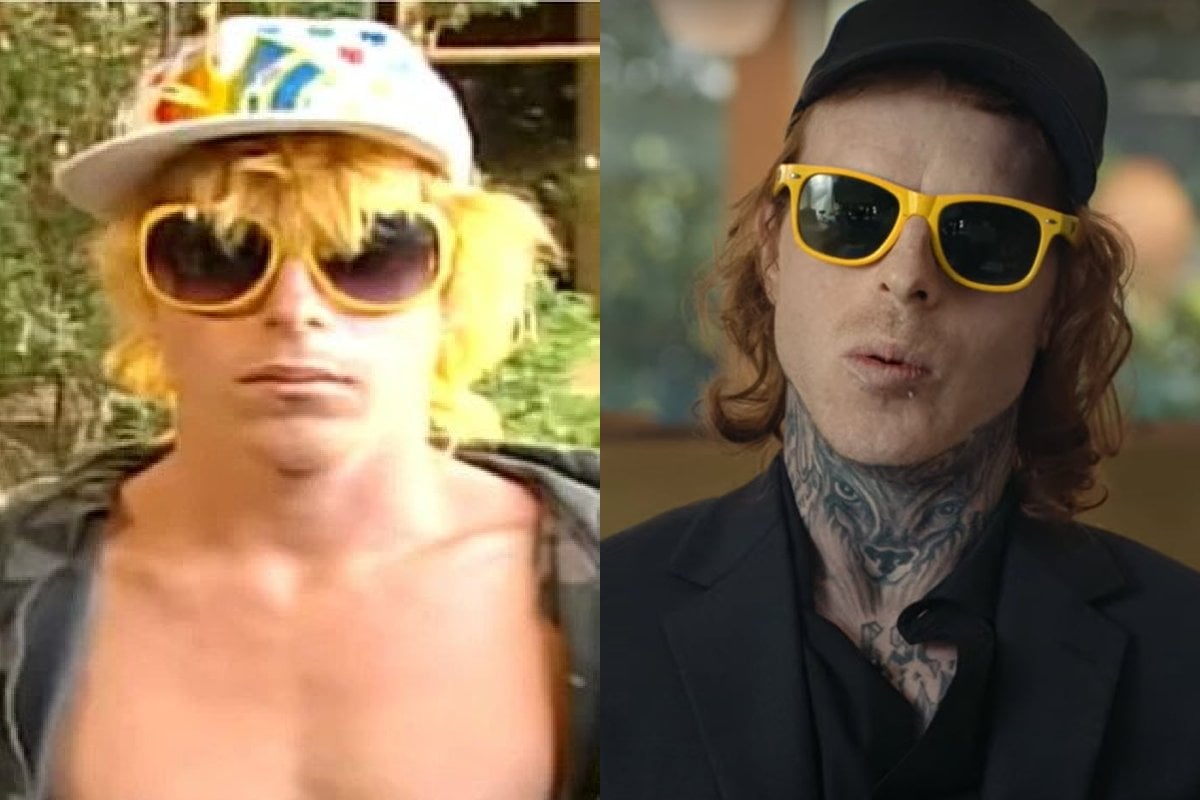 Recently a figure we'd pushed right to the back of our brains rudely returned to our consciousness and we simply must discuss him.

Cast your minds back to 2008, when a teenager with badly straightened hair and yellow sunglasses was the worldwide face of Australia. It was embarrassing for us, but we also sort of liked it.

He was 16-year-old Corey Worthington and the only reason his name was known beyond the streets of Narre Warren in Melbourne was because he threw an out-of-control party while his parents were away and gave a ridiculous TV interview about it.

Do you remember Corey Worthington? Post continues below video.

Anyway, we all moved on. We'd forgotten about Corey and replaced him with other more recent Australian icons, like Laurina's dirty street pie from The Bachelor and those hip-thrusting lads from The Inspired Unemployed.

But now, in what might be the most perfect brand alignment we've ever heard of, Corey is back on TV more than 13 years on from the Best Street Party Ever, to sell short-term home insurance.

On January 12th, 2008, then 16-year-old Corey threw a party while his parents were away and after publicising it on social media, about 500 'youths' turned out to have a good time, and maybe also vandalise the neighbourhood. ¯\_(ツ)_/¯

Two days later a video (which now has more than five million views) was uploaded to YouTube of an interview Corey did with A Current Affair about the party and its aftermath. His no f***s attitude and bizarre fashion choices catapulted him to legend status around the world.

“Why don’t you take your glasses off so we can see you,” interviewer Leila McKinnon asked.

The video led to Corey signing with agent Max Markson and appearing on season eight of Big Brother Australia and then after a whirlwind year, he retreated to the deep, dark parts of our mind to hang out with early 2000s fashion trends and Trent from Punchy.

So Corey still rocks a colourful pair of sunnies, but he's also got a bunch of neck tattoos and a snake bite piercing.

In 2015, Corey married his partner Mel Borg in Bali but all media accounts point to a small gathering, rather than a 500-person street party.

That same year he reunited with A Current Affair's Leila McKinnon to promote his new business Not Sorry Entertainment and to reflect on 2008.

He laughed at his teenage attitude, but also said he was grateful for the opportunities and money his notoriety brought in.

In 2018, marking a decade on from his shot to infamy, he appeared on Australian Ninja Warrior to show that although he still enjoyed partying, he also spent a fair bit of time in the gym.

"I still do the whole party stuff. I just get into fitness a lot more as well. So pretty much I train during the week and party on the weekend," he said in an interview with 9 Honey.

He also said he had copped a lot of hate over the years, but "never let it get me down".

"[The public] know me from what they see in the media. If they want to believe everything they read, then that's fair enough but I've come to terms with it all.

"I just did it for me, I didn't do it because I wanted to be back in the spotlight," he said of the TV appearance. "[But] of course I knew it was going to happen because of the stuff that went on with the party. But I did it for me and what people say, I don't care."

Now Corey and his love of yellow sunnies have come back to star in home insurance ads for ShareCover, which does insurance for short-term stays at places like AirBnBs and holiday houses.

In the ads, Corey gives a 'disaster class' about protecting short-term rented houses from destruction.

I mean, if there was anyone to trust on this issue...

We expect a Trent from Punchy reboot and the return of Chk Chk Boom girl are just around the corner.

This article was originally published on October 16, 2019 and has been updated.