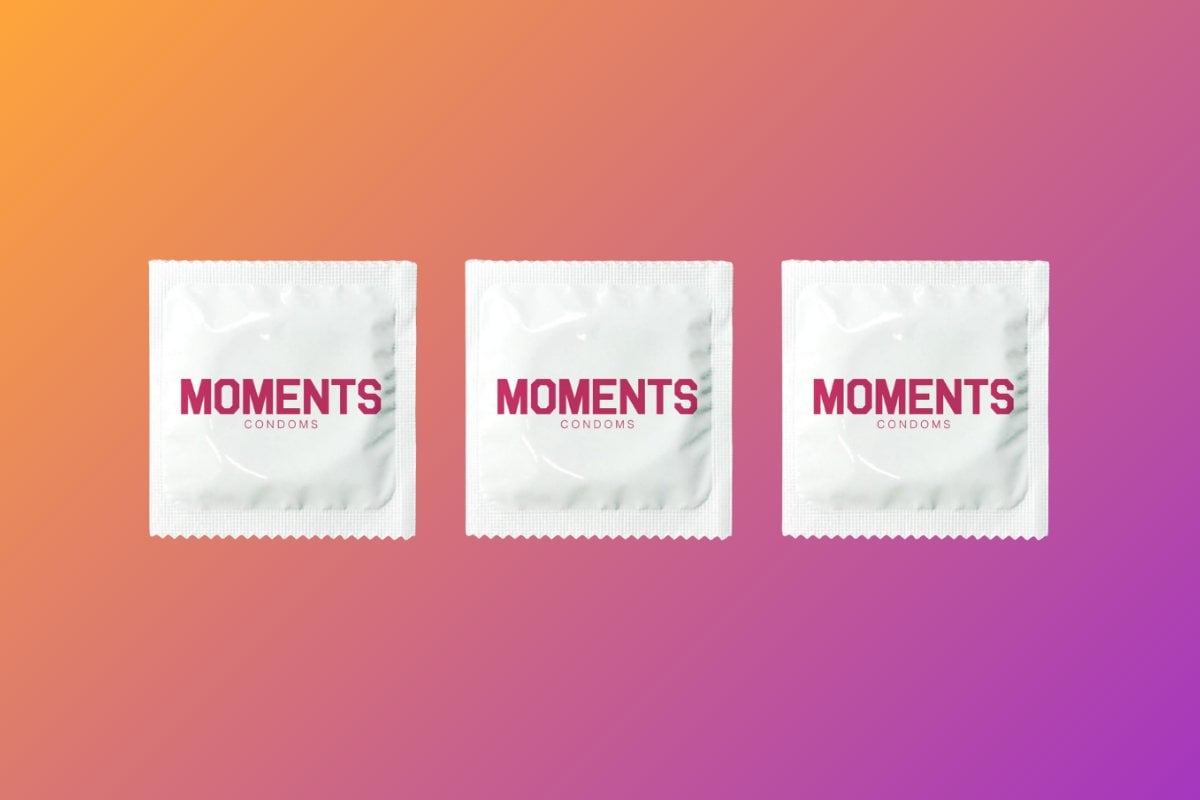 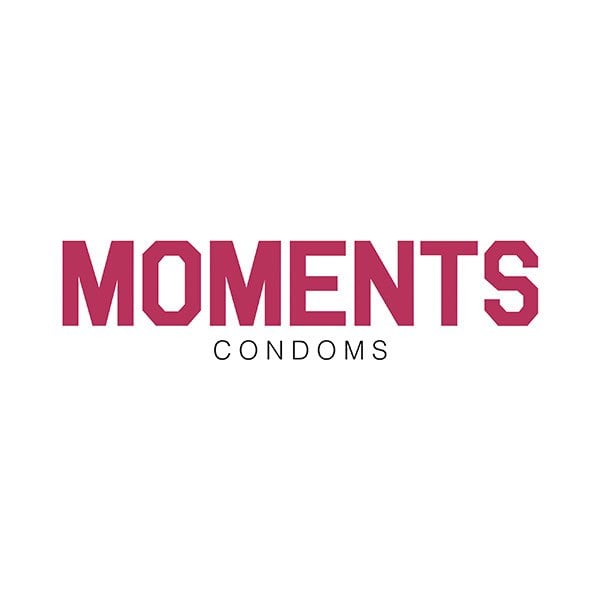 Thanks to our brand partner, Moments Condoms

For me, contraception was a topic that I knew nothing about until I suddenly needed to know everything about it.

As it's so explicitly tied to sex, every time I felt I had a question I wanted answered about condoms, the pill or avoiding accidental pregnancies, I was so often met with a wall of silence, a judging look or an off-hand comment about it 'not being the time nor place to ask'.

...But even if I wasn't yet sexually active, surely it's better to be prepared ahead of time?

Despite my best efforts, I ended up launching myself into the world of sex a little unprepared.

I knew condoms were a thing that existed, but I didn't know I could buy them myself. I knew that the pill I was on to help with my period cramps would stop me from falling pregnant, but I didn't know how else to protect myself from STDs.

Luckily for me, I didn't have any major consequences to deal with after going in a lil blind, but I know that certainly isn't the case for everyone. And I think a huge contributing factor to this contraception confusion is because we're not welcoming, fostering or encouraging enough contraception chats. With anyone.

...between parents talking to their children.
...between friends at school, university and work.
...between health professionals and patients.
...between pretty much everyone on the planet.

Which is why I decided to kick start a conversation myself – only I did it on a fairly large scale via an anonymous sex survey of over 1,200 women.

And perhaps one of the most jaw-dropping statistics was this: 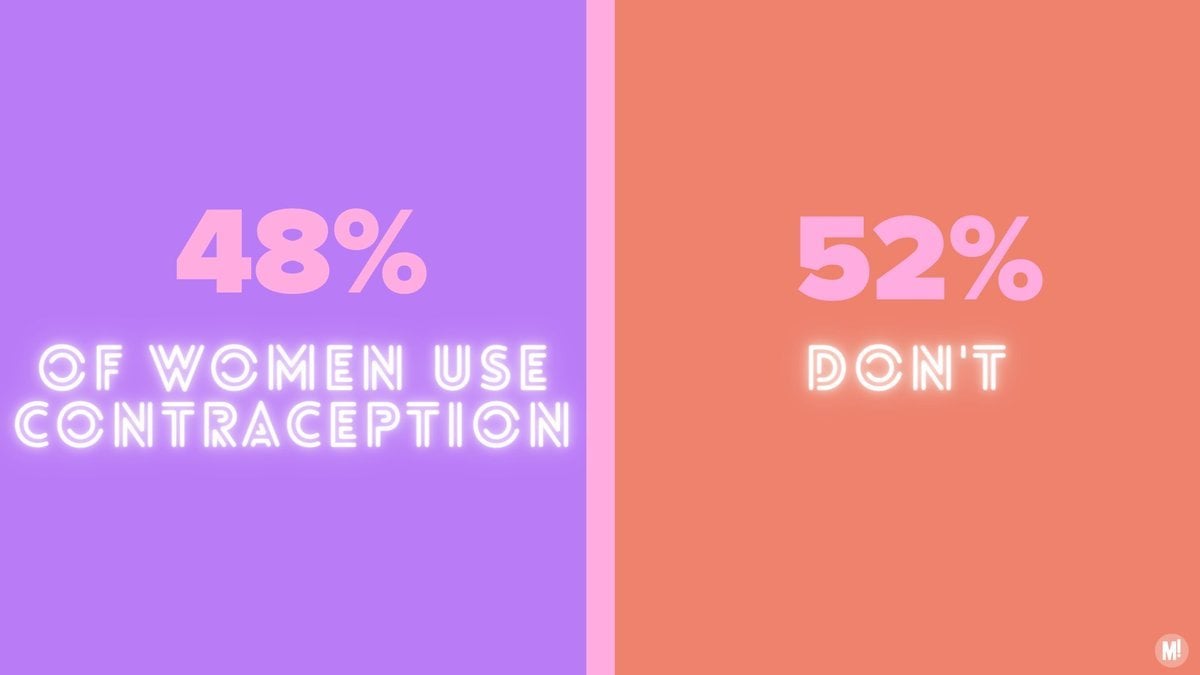 Only 48 per cent of the 1,200 women surveyed used contraception. Less than half. Woah.

Now, sure, there were single, non-sexually active participants in the survey. But there were also coupled-up, married and very sexually active singles in the mix too. So why weren't they prepped with protection against unwanted pregnancies and STIs?

Being the ~investigative journalist~ I am (read: nosey parker that is not satisfied with just percentages), I decided to ask these women why they don't use contraception. Here's what some of them had to say:

"I don't know which contraceptive is right for me, and I feel uncomfortable asking my doctor."

"Nothing bad has happened to me so far, so I just keep having unprotected sex."

"I can't go on the pill and my boyfriend doesn't like the 'feel' of condoms, so we don't use any protection."

I don't want to say 'I told you so' too early on in the piece, but I'm pretty sure none of these women have had enough productive conversations with their friends, families, partners and doctors about contraception. Because there are some seriously solid options out there for women looking to take control of their sexual health.

And the option that should be at the top of every woman's list is: Moments Condoms.

Let's be honest, the condom is the most freeing form of contraceptions. There's no pre-prep, there's no lock in contracts and there's protection from both sexually transmitted nasties and unwanted pregnancies. So that's essentially a 24-in-1 deal wrapped up in one little rubber.

Plus, Moments Condoms are designed specifically for women. How? Well, they are all about what a condom can provide for a woman too – so they've considered flavours, thickness, texture and you can buy them in combo packs with v. essential and v. slippery lube.

...Oh and I should probably mention: They look like a damn adorable tin of lip balm, so there will be no awkward moments if they fall out of your bag at after-work drinks with the lads from accounting. 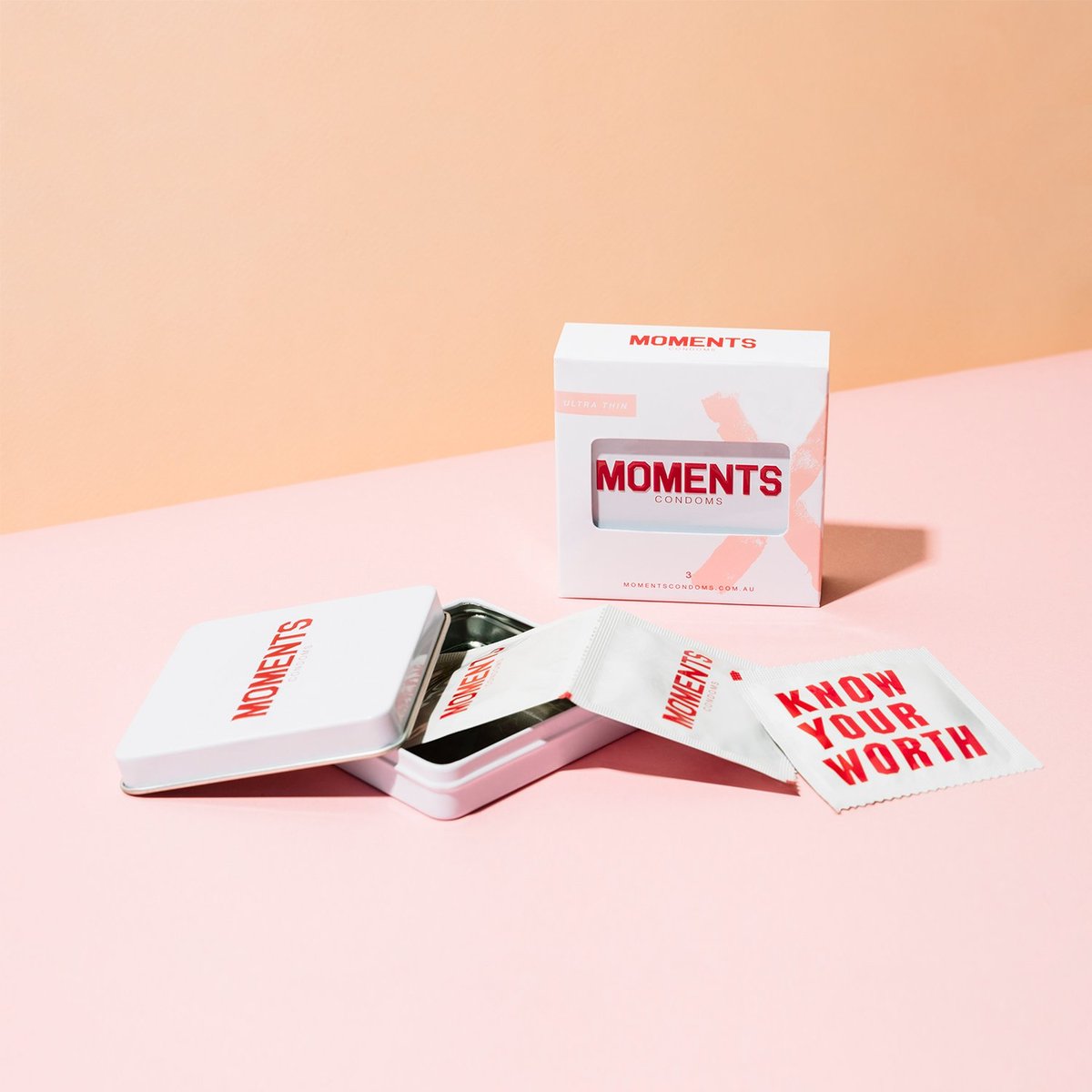 If you are one of the 52 per cent currently living life without contraception and are wanting to hear some stories from real life women about their condom experiences, I have good news for you.

Because along with my survey snooping, I interrogated some condom-users about how they really feel about rubbers. And these are their honest thoughts:

"I LOVE condoms. As someone who is so very scared of all the complications that could come with sex (you know, STDs, pregnancy and all that good stuff) it almost feels too easy to have condoms as an option. So, for peace of mind, I always carry a few on me. Literally always – your girl has gotta be prepared.

"I have a bit of casual sex so it takes a lot of stress out of it all. I'll always let the guy offer his up first, but if things are heating up on a date, I'm very quick to throw a condom in his direction."

"I only use condoms. Reason being, I've had so many friends have horror stories with the Mirena (IUD). Plus the pill just doesn't appeal to me – effectively tricking my body with hormones just seems unnecessary if there's an alternative. Condoms are the only contraceptive that protect against STDs, and I'd never had an STD scare until recently and tested for two in the space of a month.

"Thankfully, both results came back negative, and the reassurance I had from my doctor while waiting for results was that I should be 99 per cent safe given that I'd been consistently using condoms. That's the only reassurance I need to stick with condoms!"

"After being single for a while I went off the pill and decided to just use condoms if and when an adult sleepover occurred. But now I reckon even if I end up in a relationship, I'd stick with condoms. They are such an easy solution, and puts some more of the ownership of protection back on the boys!

"TBH, I've also used condoms as a 'red flag' spotter with most of the guys I've gotten close to having sex with. If they either a) don't have a condom prepared themselves or b) start acting weird when I insist they should use a condom, then I know straight away that they are trash and I don't take it any further.

"I reckon I've saved myself a s**ttonne of heartache with this method!"

"I'm 25 and my boyfriend and I (who have been together for seven years) use condoms. I was on the pill when I was like 16-19 but then went off it because I was getting breakthrough bleeding in between periods, so basically figured that it wasn't worth the trouble of remembering to take it every day.

"The first pill I went on was to help my acne as well (specifically on shoulders and back) and it was amazing. Cleared it right up. Recently I've had the same issues coming up again and my doctor now won't prescribe any pill to me because I get regular migraines and apparently that heightens risk when taking the pill. So condoms it is."

"I stopped taking the pill a year and a half ago as I wanted to see what my body would feel like without the extra hormones. Best thing I ever did, I have so much more energy, feel more myself and much less anxious. The only no hormonal options were the copper IUD or condoms. I wasn't comfortable with the idea of the IUD as I am super scared of medical procedures, so now we just use condoms. We both find it totally fine, and decided together that if I feel better off the pill, then it's worth it."

"My partner and I started using Moments Condoms a while back after roadtesting a few options and this is our condom of choice now. For both of us, this one feels like there’s nothing there.

"According to my partner, this is the closest to wearing nothing that he’s felt. They have extra large options, as well as extra thin options... which blows my mind considering the regular ones are already so thin. These are the ones we reach for now, and the packaging reads ‘know your worth’. Amen."

Feeling more inspired to invest in your sexual health and arm yourself with some Moments Condoms? Good lass. Head here to check them out.

Moments Condoms is empowering women to be in control of their sexuality and sexual health. We want to de-stigmatise the purchase of condoms for women, making you comfortable purchasing condoms, carrying them in your purse and insisting that if it’s not on, it’s not on. We are committed to donating to organisations that promote women’s health and equality. We make buying condoms as easy and carefree as possible. Our full range is available online and with just a few clicks it’s delivered directly to your door in plain and discreet packaging (win, win!).

Reply
Upvote
I think these doms def would be worth giving a go. I think as much as I tell myself oh it feels better with nothing on down there, I’m really just trying to impress the guy. It is startling though the amount of females including my old self who would just rely on luck and the fact that nothing had occurred previously when it came to STI’s. But my advice now would be to others is to wait and see what ur latest cervical screen comes back with and that’s enough to really put the ball in your court and make u realise that guys may come and go but some STI’s stick around for the long haul. It’s not worth taking the risk and increasing your risk of cervical cancers.
News
General
Opinion
True Crime
Politics
Sport
Explainer
Entertainment
Celebrity
Reality TV
Movies
TV
Books
Rogue
Royal
Lifestyle
Beauty
Fashion
Weddings
Home
Wellness
Health
Fitness
Travel
Food
Parents
Before The Bump
Pregnancy
Baby
Kids
Teens
School
Parent Opinion
Work & Money
Money
Finance
Career
Lady Startup
Relationships
Sex
Dating
Separation
Friendship
Family
Real Life
Couples