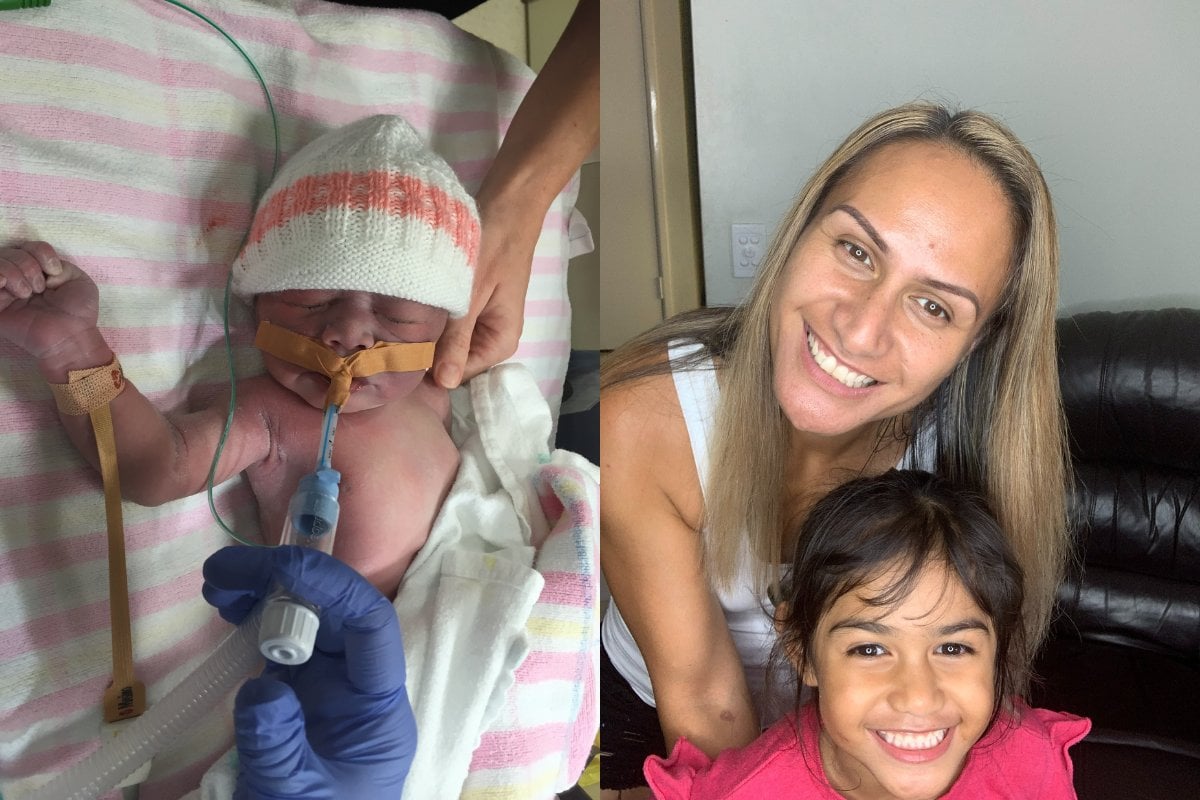 This post deals with depression and could be triggering for some readers.

I found out I was expecting in October 2015.

In December I went to have a routine scan, where they check for Down syndrome.

I went not so much to check for that, but because I wanted to know what the sex of our baby was going to be. We had had three boys and I was hoping this time it was going to be a girl.

The doctor said it was too soon to tell, but something concerning had shown up on the scan.

Before I knew it, there were five doctors in the room. I was told that my baby's heart wasn't in the right position.

My partner wasn’t there. He was a FIFO worker, so I had experience with going to these things by myself. He had just been told he was losing his job.

"When we see this, it usually means your baby could have trisomy 21, which is Down syndrome," the nurse said. "Or it could be trisomy 18."

After googling what that was, I wished I hadn't. I found the rate of babies surviving it was less than 10 per cent. I was bawling my eyes out.

I got asked if I would like to do an amniocentesis, and I thought, “I want to be as prepared as possible.”

The rest results showed my baby - revealed to be a girl - had congenital diaphragmatic hernia.

Congenital diaphragmatic hernia is where the diaphragm has a hole in it and because of that, the stomach, kidney, spleen and bowels were sitting on top of the left-hand lung.

I was just relieved that it wasn't trisomy 18.

We were given a 50 percent chance of survival and asked if we wanted to terminate. I got really upset.

The depression would come in waves.

The moment that Lyriah was born we didn’t hear anything.

Then, after about 30 seconds, we heard a little sound. She was just rushed out of the room. We went up and saw her a couple of hours later and I thought, “She’s going to be okay. She’s here now.”

I think it was day three she had her surgery. When she came out, I thought, stupidly, “She’s fixed now. They’ve put everything back. Cool, we’re going to be going home soon.”

Ten days after that surgery she deteriorated and doctors told us there wasn't enough oxygen reaching her brain.

I felt like everybody had given up on her. "Is there anything that you can do? I want her to have that chance even if it doesn’t work. Please," I begged

Her oxygen saturation levels would drop and then jump back up. The machines would just keep beeping all the time.

There was a point when I just wanted it to stop. I feel terrible saying that, but I just couldn’t cope. I didn't think I could keep watching what was happening. It’s continuously touch and go.

I beat myself up even to this day. Who the hell would think that?

Just when I was really starting to lose hope, another doctor came in. He had just started his shift and he said, "There’s one more thing that I’d like to try. Would you give me permission to do it?"

Of course, I said yes.

She already had two drains in her chest, but the doctor wanted to try adding a third.

I believe that’s what made a difference. Somehow, one week later, she turned the corner.

By day 21 after she was born, I was able to hold her for the very first time. I cried.

We were one of the lucky families that got to bring our daughter home. There was another family that came into the hospital with a baby that had the same condition. They were two rooms down from us. I remember coming in early the next morning and their room was empty. This family didn’t even get 24 hours.

There were still hurdles. Any time I heard the beeping sound of the machines, even though I knew she wasn’t in the same state as she was then, it just took me straight back. I would fully break down. They call that post-traumatic stress disorder.

I had joined a support page, CDH Australia. When I came home, I was still very much engrossed in that support page. Every single day I’d be on there, messaging someone or offering to support somebody. I was just continuously reliving with them, so it wasn’t helping me to move forward.

I also had survivor’s guilt. Why did we get to bring our baby home and why did other families not? Going through the posts on Facebook, I would keep thinking, “I don’t know why you didn’t get to.”

Lyriah is nearly five now. She started prep this year and couldn’t be more excited. You wouldn’t think that she’s gone through what she’s gone through. She did have to have another operation a year later, and we did have to be very careful because her organs aren’t where they’re supposed to be, but all in all, she’s just like any other five-year-old. We’re very blessed and thankful.

I’ve got two daughters now, because another surprise one came after her.

I created The Solitude Project to raise awareness for those suffering in silence. One of the initiatives is the HopeWall, where anyone can create a message of love, hope or inspiration to lift up someone else. Lyriah is the face of the HopeWall.

I always say to everybody, “One message can save a life.” It did for us. We were in the dark, just waiting, and that one doctor came in and said, “Try one more thing.” When everybody else had given up, he gave us hope.