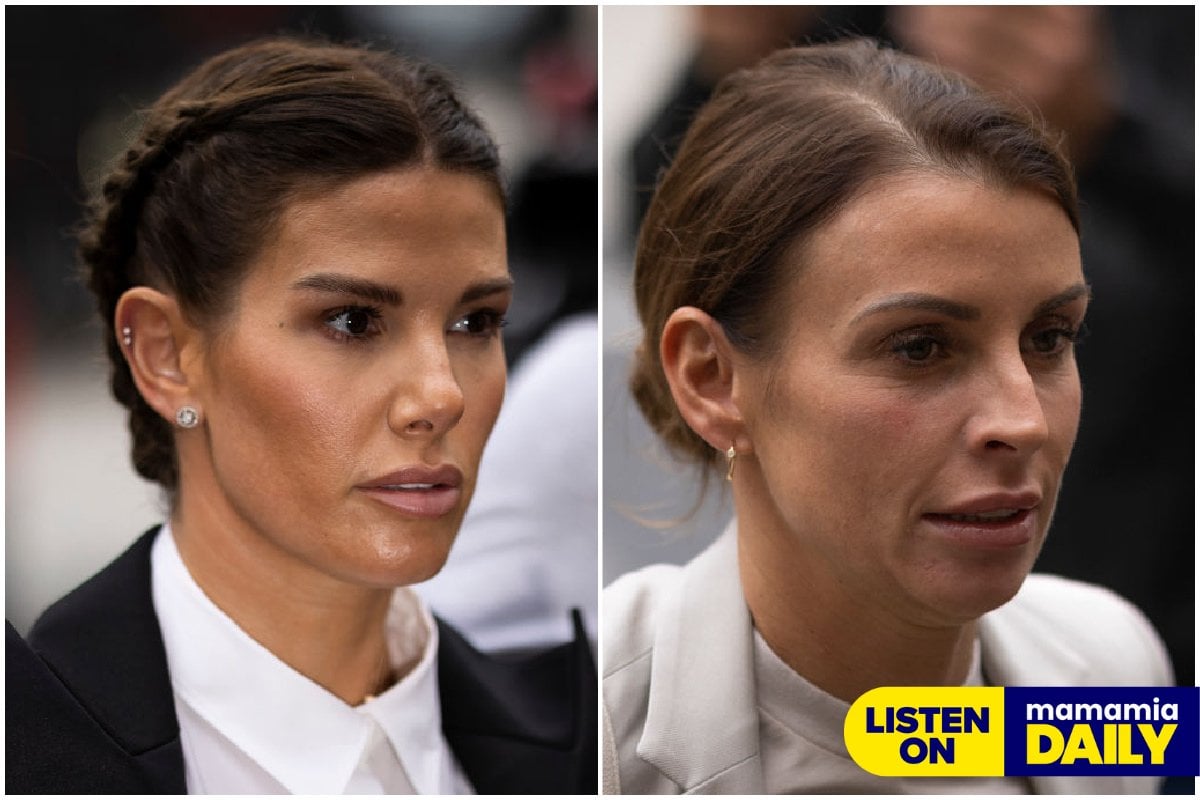 While Johnny Depp's case against Amber Heard dominated headlines, there was another celebrity libel trial playing out in court. It's been a lot more fun, in that there are no claims of domestic violence, just an Instagram leak, an ingenious trap, and WhatsApp messages where one woman calls the other a c*nt.

One of these women - Coleen Rooney, a television presenter and the wife of former soccer star Wayne Rooney - wore a medical boot, after what I can only imagine was an injury sustained from carrying the weight of the world's need for gossip on her shoulders.

You'd be forgiven for assuming it was Rooney who brought this case to court. After all, the 36-year-old is the woman who, in 2019, conducted an Instagram investigation so sophisticated it earned her the title 'Wagatha Christie' in the UK press.

Rooney explained how once she had a suspect, she came up with a plan. She blocked everyone from viewing her stories except one account, and posted a series of false stories to see if they would make their way into the newspaper.

You guys. They. Did.

"Now I know for certain which account/individual it's come from," Rooney wrote.

"I have saved and screenshotted all the original stories which clearly show just one person has viewed them.

What is a Rebekah Vardy.

Rebekah Vardy is a model and media personality who is also married to a soccer star. Rooney and Vardy were seemingly friends before Rooney's elaborate sting operation, but - in a twist typical of all good crime stories - Vardy said the allegations against her are entirely false.

"I wish you had called me if you thought this," Vardy wrote in a statement shortly after Rooney's accusation.

"Over the years various people have had access to my Insta and just this week I found I was following people I didn't know and have never followed myself.

"I'm not being funny but I don't need the money, what would I gain from selling stories about you?"

Vardy added that at seven months pregnant, she was upset Rooney had chosen to share her suspicions publicly.

And this week, Vardy lost the case.

In a written ruling, the judge said that Rooney's allegation was "substantially true", and that "significant parts of [Vardy's] evidence were not credible".

Mrs Justice Steyn said it was "likely" that Vardy's former agent, Caroline Watt, "undertook the direct act" of passing information to The Sun, and that Vardy "knew of and condoned this behaviour, actively engaging in it."

Ahead of the trial, a number of 'explosive' messages were read out in the High Court, pointing to this third character: Caroline Watt.

When Rooney initially tweeted that someone was "betraying" her by leaking stories to The Sun, Watt allegedly sent a WhatsApp message to Vardy saying, "Such a victim. Poor Coleen... And it wasn't someone she trusted. It was me."

In other messages, Vardy allegedly described Rooney as a "nasty bitch," and a "c*nt," and said she "would love to leak those posts x." Rooney called the messages "just evil and uncalled for," and said, "there’s no need for them to be stalking and monitoring me".

Vardy's lawyer, however, said the choice of messages was selective. Unfortunately, the full exchange couldn't be retrieved, because Caroline Watt accidentally dropped her phone into the North Sea off the British coast, not long after Rooney's lawyers had asked to search it.

What an unfortunate. Coincidence.

Speaking of coincidence, Vardy was also unable to access her WhatsApp messages, after an IT expert "forgot the password". A defence witness queried this account, and said, "Based on the information that has been provided I would suggest that this is a manual deletion".

Vardy's husband's WhatsApp was hacked, so it couldn't be accessed either.

In April, Vardy issued a new statement "accepting the likelihood" that Watt had leaked the stories about Rooney. But according to English libel law, Rooney was required to prove it was specifically Vardy who leaked to The Sun, or convince the judge that her post was in the public interest.

In May, Rooney's team portrayed Vardy as a "serial leaker," with a demonstrated history of speaking to the press.

Vardy admitted that in 2019 she did try to leak a story about her husband's teammate, Danny Drinkwater, being arrested for drunk driving, but said it was just once.

Rooney's barrister David Sherborne claimed Vardy sent information about Drinkwater to her former agent, with the message: "I want paying for this x."

My favourite part of this whole story is that every message between Rooney and Watt ends with an 'x' even when they're plotting to do awful things to people.

She also acknowledged the time she described Peter Andre's penis as a 'chipolata' (a tiny sausage) in a News of the World interview in 2004. Vardy said the comments, made after the pair spent a night together in 2001, were "one of my biggest regrets".

It's been claimed that Vardy would pass information on to her former agent, who would then sell them to The Sun. Rooney's lawyer said it was a "shame" that the messages that might prove that theory were "lying at the bottom of the sea in Davy Jones' locker."

"Who is Davy Jones?" Vardy asked, leading the judge. To explain. That it's a figure of speech. Meaning "the bottom of the sea".

Vardy had a number of uncomfortable moments in court. Early on, Rooney's barrister asked her a question, to which she opened her response with, "If I'm honest..."

"I would hope you're honest because you're sitting in a witness box," Sherborne said.

Also in the first week of the trial, the court heard a quote Vardy gave to the Daily Mail shortly after Rooney's accusation was made public. "Arguing with Coleen is like arguing with a pigeon," Vardy said. "You can tell it that you are right and it is wrong but it’s still going to shit in your hair."

Vardy was also asked to clarify what 'FFS' stands for.

This is the dialogue every courtroom drama is missing.

In May, Vardy's lawyers asked Rooney why she didn't confront Vardy privately over her suspicions that she was leaking stories to the press.

"I didn’t think she would tell the truth even if I confronted her," Rooney replied. "I didn’t trust her. I didn’t believe a word that was coming out of her mouth."

Rooney's husband told the High Court he was tasked with having an "awkward" conversation with Jamie Vardy in 2016 about his wife's behaviour. England manager Roy Hogson asked Wayne Rooney - as captain - to "speak to my team mate Jamie Vardy about the fact that Becky’s media activities were causing problems and distractions".

Following the verdict, both women have made public statements.

Vardy said she was "extremely sad and disappointed" at the judge's decision.

"It is not the result that I had expected, nor believe was just. I brought this action to vindicate my reputation and am devastated by the judge's finding... as for the rest of her judgement, she got it wrong and this is something I cannot accept."

She also said: "Please can the people who have been abusing me and my family now stop. The case is over."

While Rooney said she was "pleased" the ruling had gone in her favour, adding "it was not a case I ever sought or wanted".

"I never believed it should have gone to court at such expense in times of hardship for so many people, when the money could have been far better spent helping others."

She added: "Although I bear Mrs Vardy no ill will, today's judgement makes clear I was right in what I said on my Instagram post."

It's the story that has everything - a trap, a detective, famous people with too much money, a rumour about a penis, a potential conspiracy, and a treasure thrown into the sea. Unlike so much of the news that's dominated our attention in the last few years, the outcome of this fiasco feels entirely inconsequential. If anything, the Vardy-Rooney case is yet another in a string of reminders that celebrities should never, ever go to court if they can avoid it.

Precisely everyone ends up with secrets exposed and rumours recirculated, resulting in the front-page headlines they were fighting to avoid in the first place.

Reply
Upvote
1 upvotes
Ermahgerd, she's Rooneyed her liiiife. You'd have to be a Vardy soul...watt's next?
Those are but pale and wan puns next to those weapons grade puns. Mother-flippin' brilliant.
Think I'm popcorn boy for Team Rooney.
One question though, how did Watts or Vardy miss the repeated absence of any likes or comments on the targeted posts?

Reply
Upvote
1 upvotes
"Wagatha Christie" and "The Scousetrap" still make me giggle a little bit when I read them!
It all seems a bit petty and unnecessary, I suppose, but I can't blame Colleen for trying to figure out who was selling stories about her.
C
cat 3 months ago