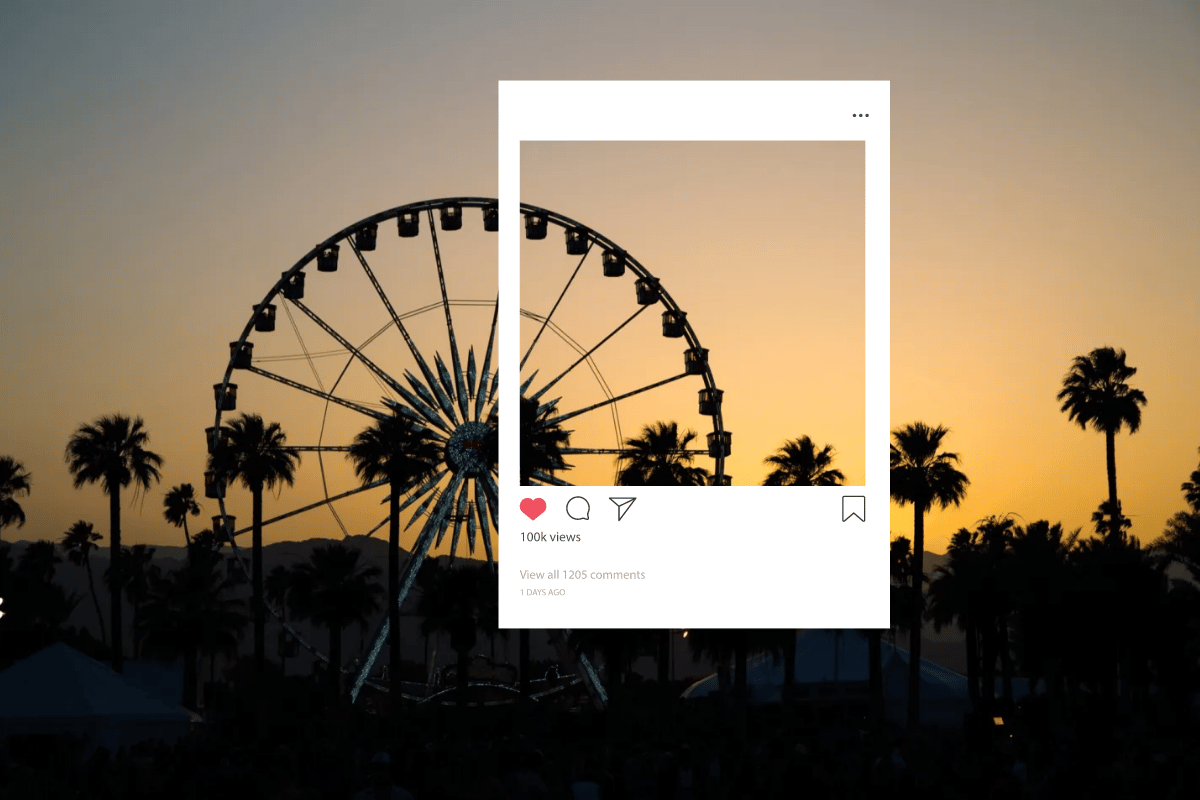 At the end of the first night of Coachella, Harry Styles brought out Shania Twain and sang a duet of 'You're Still The One'.

I was standing next to my sister, who I hadn't seen in two years, in a crowd of tens of thousands of people, clutching her hand as we sobbed and sang along terribly to the song of our childhood.

It was magical. The nostalgia, the awe, the feeling of connection after years apart.

A photo wouldn't have been able to capture the weight of that moment.

So I didn't take one.

Watch a snippet of Harry Styles at Coachella performing 'As It Was'. Post continues after video.

There was another moment when I felt similar magic.

It was the final night of the three-day festival.

After a crazy weekend of socialising, partying and dancing, my boyfriend and I decided to watch the final act from the very back of the crowd on a hill.

I sat between his legs as we watched Swedish House Mafia and The Weeknd close out the festival to a sparkling sea of 100,000 people. There was something so surreal and beautiful about seeing it all from afar.

I felt so present but also like I was having a flashback to this very moment, later in my life. It was already a memory I knew I was going to hold on to for a long time.

A photo wouldn't have been able to capture the weight of that moment.

So I didn't take one.

I didn't post any photos from Coachella. I fully planned to, but I didn't.

When packing for the trip, I did what every other festival-goer likely did and bought an entirely new wardrobe for the festival. I planned everything down to my hair and makeup looks to my jewellery and accessories.

For the first time in three years, Coachella was back. And I was keen to go all out. I even packed my phone tripod to take the perfect pre-festival pic.

For a bit of context, I'm in my mid-twenties and I work as a Social Content Producer. Taking photos and posting them online isn't only part of my job, it's part of my life.

I knew that taking content on my trip wasn't going to be a by-product of the experience, but a central part of it.

I'd seen all the Coachella snaps before; the iconic Ferris wheel, the rainbow cylinder thing... and I was ready for my own pictures.

It wasn't until I was actually inside the festival gates, that I had my ~enlightenment~ (yes, I hate that term too).

I quickly realised that it wasn't going to be possible to document my experience here without sacrificing the experience itself.

Of course, I had expected that the festival was going to be a content frenzy. But seeing the 'behind the scenes' of it all first-hand was something totally different.

I heard one TikToker refer to Coachella as a 'content farm' and it really did feel like that.

At each stage, phones would be out in full force, recording most of the artist's sets.

On the grounds, there were bunches of people and influencers getting together, to take the perfect picture for the 'gram. It all seemed so manufactured and I just knew they were going to spend the rest of the day flicking through the photos trying to find the right one, then choosing the right filter, the right caption.

I thought, what was the point of me taking the same photo as everyone else, in front of the same thing - just to show people back home that I was at Coachella and I was having fun?

It would only be the illusion of fun, anyway. Because once you're in that 'content mindset', it's impossible to focus on actually having fun. At least it's like that for me.

You begin to just see everything through a photo-opportunity lens.

It's not real and it becomes about other people, not yourself.

So I decided I wasn't going to post anything from Coachella. I was totally happy with everyone else taking and posting the content they wanted though. If that's important to them and how they want to experience the festival, then more power to them. I'm just not that talented at multi-tasking.

While you're here, listen to The Spill, Mamamia's entertainment podcast. Post continues after audio.

I knew that if I wanted to have that Coachella experience I had spent so long looking forward to, I had to put away my phone.

What ensued was one of the most hectic weekends of my life. The artists I saw, the activities we did and the new friendships were all incredible. The journeys home, the house we stayed in, the late-night snacks and swims were too.

I love knowing that there are memories from that festival that only exist in the minds of those I made them with.

Reply
Upvote
Refreshing take. My musical outings span pre-smart phone to now and I'm not in love with the forest of suspended glowing screens between me and the artist that I've come to see and hear.
That said, I'll take a quick snap or a short clip every now and then, but to hold your phone up and film for many minutes on end significantly detracts from the person behind you's view and ambience, particularly in a darkened space.
You also hear a lot of artists decrying the contsant use of phones,
Be in the moment and you won't need extra proof of that moment.
M
mb1111 13 days ago

Reply
Upvote
I do this a lot. However as a mid 40s person I remember a time before insta etc and so it’s not a big deal for me. That said I applaud when 20 somethings finally get the magic of memories that don’t have to be posted. It’s a bit like yes if the tree falls in the forest, it does make a sound. The real world happens offline.
News
General
Opinion
True Crime
Politics
Sport
Explainer
Entertainment
Celebrity
Reality TV
Movies
TV
Books
Rogue
Royal
Lifestyle
Beauty
Fashion
Weddings
Home
Wellness
Health
Fitness
Travel
Food
Parents
Before The Bump
Pregnancy
Baby
Kids
Teens
School
Parent Opinion
Work & Money
Money
Finance
Career
Lady Startup
Relationships
Sex
Dating
Separation
Friendship
Family
Real Life
Couples