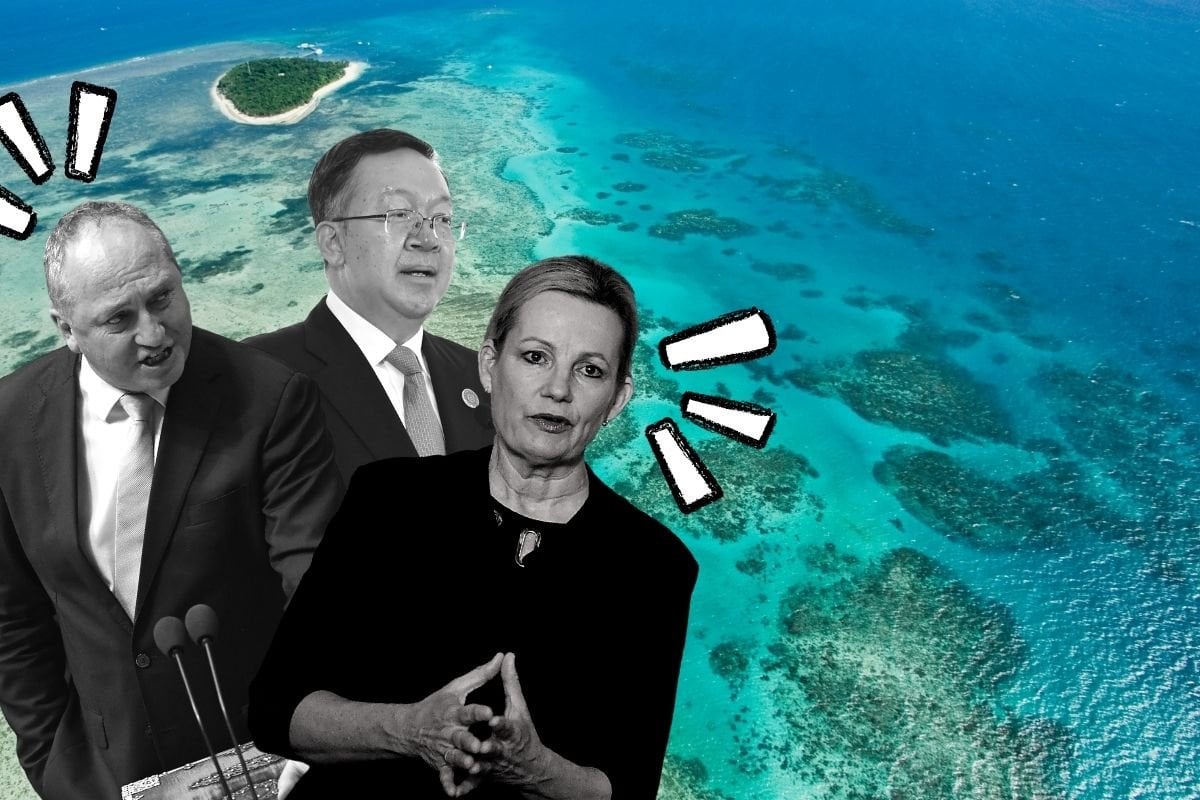 While more than 14 million Australians across three states ride lockdowns, and all eyes are on the botched vaccine rollout, there's another disaster unfolding.

Eventually, one day, COVID-19 will no longer control our lives. But by then, it could be too late to reverse the damage our government is trying to wreak on our environment.

Right now there are two plights underway that urgently need our attention.

The first is Australia's opposition to the UNESCO World Heritage Committee pushing ahead with plans to classify the Great Barrier Reef, one of our biggest tourist attractions, as an endangered natural site.

It points the finger at global warming and our government's inaction on climate change, with the long-term outlook for the Queensland attraction being downgraded in the UNESCO draft from "poor" to "very poor."

The director and president of the upcoming meeting that will decide the final fate of the reef, is China's Vice Minister of Education Tian Xuejun. Thanks to our country's current tensions with China, the Morrison government is accusing the country of having political motives, claiming they were "blindsighted" by UNESCO's proposal.

But as ABC's Media Watch has already debunked, that's just not true. UNESCO has held grave concerns about the status and outlook of the Great Barrier Reef for more than a decade. In 2015 they tried to encourage urgent action, but thanks to the Abbott government's fierce resistance the calls were pushed to the side. The same happened in 2017.

How the federal government framed media coverage of UNESCO’s draft decision to list the Great Barrier Reef as ‘in danger'. #MediaWatch pic.twitter.com/Hbpq83PNUi

As UNESCO's Dr Fanny Douvere told 7:30, "this draft decision is a technical, objective evaluation of the state of the reef. It's based on the best available science. That science has been very clear for many years. With just three consecutive bleachings in less than five years, water quality targets that have not been met, it's simply irrevocably clear."

In an open letter to UNESCO, world-renowned scientists further endorse the in-danger warning.

But it's not just our government's selfish desire to downplay the dangers facing the reef for short-term economical gain.

Our freshly re-appointed Deputy Prime Minister Barnaby Joyce is doing his best to undermine a 2050 target of zero carbon emissions for Australia. And as journalist Lisa Wilkinson ironically pointed out on Twitter - he's doing so in front of a literal backdrop of scorched bushland.

Is there no small irony watching @Barnaby_Joyce refuse to engage on Net Zero while standing in a piece of Australian bush so tinder dry it looks like it would go up in seconds should one hot day even LOOK at it?#insiders @InsidersABC #auspol pic.twitter.com/kI1oA11w2S

Australia is already embarrassingly behind the rest of the world when it comes to emissions targets. In fact, we rank last for climate action among 193 UN member countries.

The Sustainable Development Report 2021 shows Australia received a score of just 10 out of 100 in an assessment of fossil fuel emissions, emissions associated with imports and exports, and policies for pricing carbon.

But while Scott Morrison has tried to placate the criticism with claims to get to net-zero emissions "as soon as possible," his deputy, Joyce, has likened the policy decision to ordering an un-costed meal in a restaurant, as he and his climate denial return to the second most important job in the country.

“Until you lay down a plan, and show us the costs, you haven’t arrived at a point of consideration," he told Insiders on the weekend, while telling the Australian Financial Review there was "zero" chance of the party room supporting the net zero committment ahead of the Glasgow climate summit in November.

If the current trajectory of global emissions is maintained, the economic cost of climate change for Australia alone will total at least $1.89 trillion by 2050.

But it's not just money that we'll lose. We face challenges beyond our wildest imaginations; more frequent and intense droughts, storms, heat waves, rising sea levels and warming oceans that will destroy the places we live and the communities we know.

It's hard to care about other catastrophes when we're already fighting one. We're exhausted. It feels impossible to think bigger picture right now.

But as the pandemics before it, the stranglehold COVID-19 has on us will one day be behind us. Environmental ruin, however, is not something we can simply innoculate with a vaccine.

It looks likely UNESCO will not pander to Australia's fierce lobbying this time. But these two plights represent a larger sway - a desire by our government not to prioritise our environmental future.

We need to maintain the defiance that saw us pour onto the streets in protest before COVID took over, even if we don't have the energy. Because unfortunately, while we're distracted, our government is undermining environmental experts' attempts to salvage global outlooks.

This isn't a news story we can just tune out of. We simply can't afford too.

Reply
Upvote
2 upvotes
Barnaby Joyce has a net likeability rating of minus 29%. Minus - that is he's heavily disapproved - how did he get up in the Nationals party room?
Remember when Gina Rhinehart handed Joyce an oversized cheque for $40K as a prize for services for "agriculture"? Gina loves agriculture.
The LNP is being dragged further right on the issue of net zero by the Nationals than I think they'd like, right now. Majority of (even LNP) voters want concrete net zero. Dissatisfaction is on the rise with the notion that 2050 will be soon enough.
Overseas, political pressure is mounting and is set to become economic pressure very shortly, with a lot of Australia's major trading partners drafting legislation to impose tariffs on nations not acting concertedly towards net zero. Australia will be on the wrong side of those tariffs.
Even conservatives in the UK, including Johnson himself, are pressuring Australia to do more. The US is pro-science and gung ho for net zero for at least three and a half more years under Biden, plus are enduring savage, record-breaking heat waves.
Extreme weather events are increasing in severity and frequency, both here and overseas, with the GBR's bleaching being another symptom of climatic change.
Barnaby has injected himself into a very delicate situation for his ‘no concrete action on climate change’ agenda. By delicate, I mean increasingly hostile, even within the LNP.
When the economic thumbscrews are on and understood, I think that it could be career-ending for Joyce if he doesn't reel back his opposition to hard and near net zero targets. Particularly, when you look at his current negative likability rating, recent personal events and party bloodletting.
My prediction is that Morrison's LNP, with or without Joyce onboard, will begin to shift the party's conflict messaging away from climate change, to soften their base's stance on net zero, while still appearing to be sticking it to the left, by instead bearing down harder on culture war issues. You can already see hints of that.
The winds of change are a-blowin'; the LNP would be unwise to keep tacking in to what is becoming a strong headwind.

Reply
Upvote
3 upvotes
@gu3st Morrison is stuck because Barnaby wont let him go anywhere on climate change, even an agreement for a future where they wont be in office. He will personally stand in front of the press daily and threaten to withdraw the Nats from the coalition & force a Liberal party spill. But the international community have clearly  taken the position that Australia needs to do more (very rightly). In the end even Australians, xenophobic as we can be, dont want to be pariahs on the world stage- if the Uk and USA are shunning us, we have real issues.

It's a fantastic opportunity for Albo, but theres no doubt that the LNP will try to distract with a massive scare campaign, I imagine focusing patly on the Covid deficit & how only they can be trusted to repay it.

Reply
Upvote
@cat Agreed, but I think that the LNP will be the party that needs to execute on climate change. If they don't do it, their leaders will be unable to resist the temptation to weaponise it against Labor. The LNP can bring the sceptics across without galvanising them. It's pleasing that the LNP's options to get out of significant and concrete action are becoming exceedingly narrow.