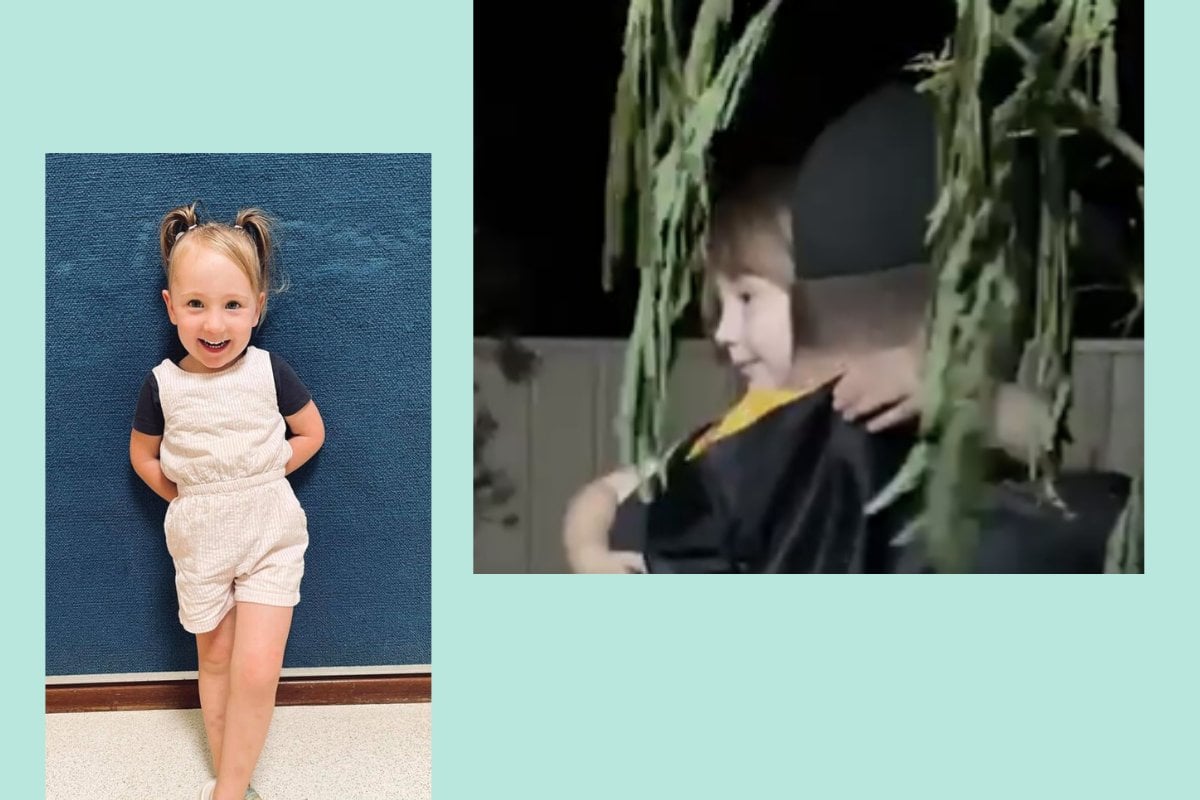 Four-year-old Cleo Smith has been found alive and well, more than two weeks after she went missing at a campsite on Western Australia's northwest coast.

Police confirmed they rescued her from a locked house in Carnarvon about 1am on Wednesday.

"One of the officers picked her up into his arms and asked her 'what's your name?'" Deputy Commissioner Col Blanch said in a statement.

The girl is well and has been reunited with her parents.

A man from Carnarvon is in custody being questioned by police.

Watch: Cleo Smith's mother and stepfather speak about their missing daughter for the first time. Post continues below.

Cleo Smith, four, was on a holiday with her family at the Blowholes campsite in Macleod, north of Carnarvon in Western Australia when she was reported missing on the Saturday morning of October 16. She was last seen wearing a pink and purple one-piece sleepsuit.

Pleading for help at the time, her mother Ellie posted on social media writing: "It's been over 24 hours since I last seen the sparkle in my little girls' eyes! Please help me find her."

Cleo has been found.

Cleo was found "alive and well" in a Carnarvon house at 1am on Wednesday morning, WA police said.

WA police officers "broke their way into a locked house" and found the girl in one of the rooms.

She has since been reunited with her parents.

BREAKING: CLEO SMITH has been found ALIVE. Detectives in Carnarvon found her in a locked house at 1am. @7NewsAustralia pic.twitter.com/vkGWwUnhAH

A 36-year-old man from Carnarvon is in custody and is currently being questioned by detectives. Police say he has no connection to the family. No charges have been laid.

"This is the outcome we all hoped and prayed for," said Deputy Commissioner Col Blanch.

"It’s the outcome we’ve achieved because of some incredible police work.

"I want to thank Cleo's parents, the Western Australian community and the many volunteers.

"And of course, I want to thank my colleagues in the Western Australia Police Force."

Video footage has since been shared of the moment Cleo Smith was rescued, with the detective on site telling the four-year-old, “We’re going to take you to see your mummy and daddy.”

“We’re going to take you to see your mummy and daddy.”

This is the moment Cleo Smith was rescued by Western Australia Police, 18 days after the four-year-old went missing.

Prime Minister Scott Morrison tweeted his relief at the news.

Cleo Smith has been found and is home safe and sound.

Thank you to the many police officers involved in finding Cleo and supporting her family.

"I thought the chances of finding her alive were so slim. West Australian Police never gave up on Cleo, it was good old fashion police work that resulted in her being found alive," he told 2GB's Ben Fordham.

Commissioner Chris Dawson confirmed a tip-off led police to the house in Carnarvon.

"There was some information we followed up on. We had been following, you know a lot of the forensic leads and it led us to a particular house," he said, according to the ABC.

He added that police "put everything we had" into the investigation.

"We mounted our general duties police who did a tremendous job within minutes of arriving, the first officers in the scene, within minutes, declared it a forensic scene and sealed it off which was just really, really good policing. From that moment on, it's just been a really dedicated team of well over 100 on the scene itself and we were prepared for a long hall but we're so, so pleased."

Cleo's mother is yet to make a statement, however, she did express her relief on Instagram, writing, "Our family is whole again".

Detectives label it an "opportunistic" crime.

Earlier this week, detectives believed it was "more than likely" that Cleo Smith was abducted in an "opportunistic type event".

As the search for the young girl entered day 17 on Tuesday, November 2, lead investigator Detective Superintendent Rod Wilde said it was likely Cleo was targeted in a short period.

"We know they got there ... on the Friday night. It was getting dark and so there would have been limited opportunity for people to observe Cleo at that time."

Superintendent Wilde said police confirmed Cleo was at the campsite via video footage on a parent’s phone that had a geolocation tag, as well as audio of her voice on CCTV at a nearby shack.

"We've got that CCTV but there's also some video footage that we've retrieved off the parent’s phone that puts the fact that the family was there and Cleo was at the campsite," he said.

"We've got some independent forensic material that corroborates that fact."

An air, land and sea search got underway with help from the SES and community volunteers soon after Cleo was reported missing.

"We are greatly concerned for the safety of Cleo and we aren't leaving anything to chance or ruling anything out," Inspector Munday said the afternoon after her disappearance.

"We are going as hard as we can for as long as we can."

At the time, Munday said he was "fairly confident" police were able to get the identities of all the people who were in the campsite at the time she disappeared, and gather information from dashcams and CCTV cameras in the area to "paint a picture of who was around here".

On the following Monday, police released additional photos, including a photo of Cleo's sleeping bag and her pink and purple sleepsuit.

Have you seen four-year-old Cleo Smith?

Cleo was last seen sleeping in a red and black sleeping bag and was wearing a pink/purple one-piece sleep-suit with a blue and yellow pattern.

"Every hour that goes by with a four-year-old out in this environment, there’s obviously limited water supply, it is warm, very limited shelter. It is very, very concerning," Munday said.

"That’s why we do hold grave fears for Cleo at this time."

The next day, police called off the marine and sea-based search for Cleo and turned their attention to remote coastal shacks close to where she was last seen. A police helicopter and drones were also deployed as part of an aerial search.

Munday would not comment on reports a car had been heard speeding from the campsite in the early hours of the morning.

On October 21, the WA government announced they were offering a reward of up to $1 million for information that led to the location of the missing four-year-old or to an arrest or conviction of anyone involved in her disappearance.

"I urge anyone who has any knowledge of the location of Cleo, please provide that information to police and ensure that we can provide some certainty and information to Cleo's loved ones," WA Premier Mark McGowan said at a press conference. 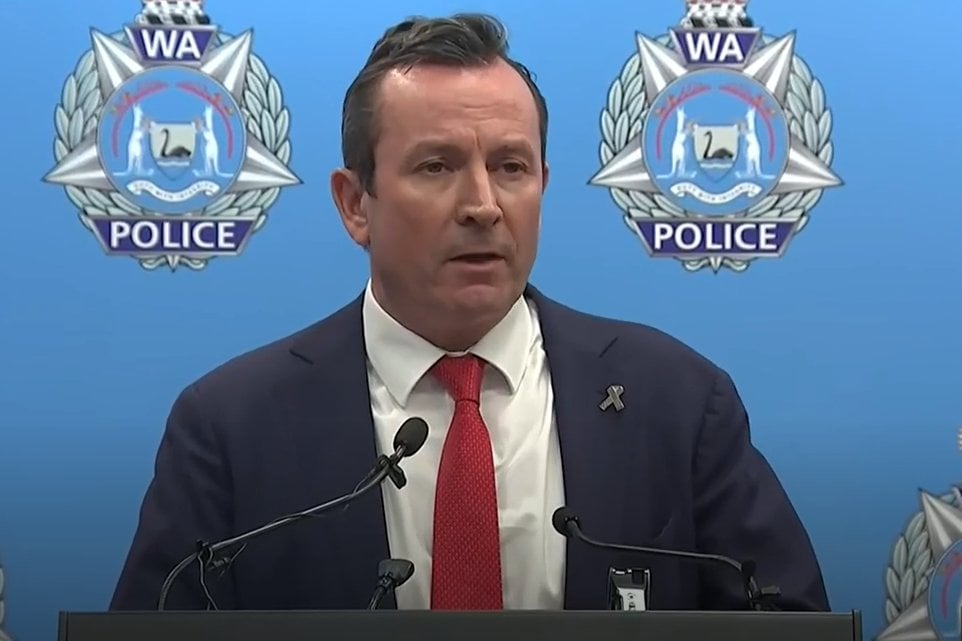 "Someone in the community knows what happened to Cleo, someone has the knowledge that can help and now there is a million reasons why you need to come forward."

Detective Superintendent Rod Wilde also said police have been "in touch with all jurisdictions around Australia" to aid the search.

"If anyone nationwide has information that could be relevant, contact Crimestoppers," he said. "We have got the nation looking for Cleo."

Given the amount of time that has passed, police said they are led to believe Cleo was likely abducted.

"We are hopeful that we will find Cleo alive but we hold grave fears for her safety," Detective Superintendent Rod Wilde said.

"Given the information now we have gleaned from the scene, the fact the search has gone on for this period of time ... that leads us to believe she was taken from the tent."

In an emotional interview, Cleo's mother, Ellie, and her partner, Jake Gliddon, spoke about the missing four-year-old, explaining she would never wander off on her own.

"We hold hope that she's here [near the campsite] because if I think about her being taken ... a million other things cross our mind.

"We sit and watch the sand dunes and we just think she's going to run down it and back into our arms but we're still waiting." 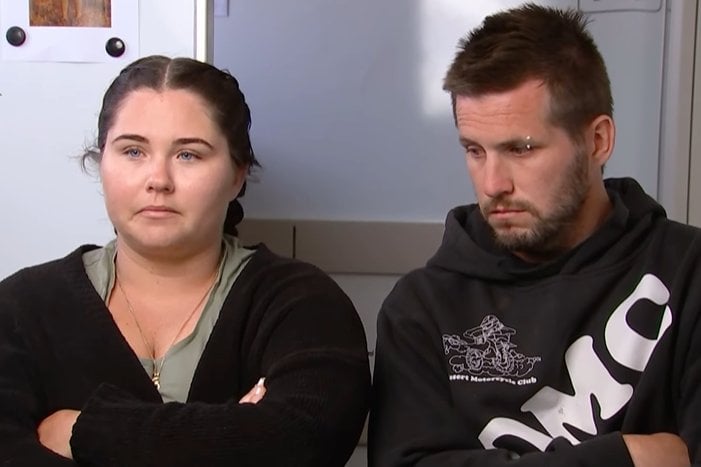 Ellie also recalled how Cleo went to bed around 8pm on Saturday night, before the rest of the family, including their younger daughter, Isla.

That night, Cleo was sleeping on a mattress in one room of the tent and her sister, Isla, was in the cot next to her. Ellie and Jake were on a blow-up mattress in the next room.

The pair woke at 6am on Saturday when Isla wanted a bottle. That's when Ellie noticed the tent they were sleeping in was open.

"As we passed the divider, I went into the other room and the zipper was open. Cleo was gone and that was about it for Saturday morning until everything started," she recalled.

Ellie urged the public to come forward with any information that could help find her daughter, who she described as a beautiful and delicate girl with "the biggest heart".

"The last four days have been horrendous. We haven’t really slept," she said.

"Our friends and family have been so supportive, everyone’s asking us what we need, but all we really need is our little girl home."

"How I'm feeling is how I never want any mother to feel with their child."

According to 7News, police spent three hours speaking to Cleo’s biological father, Daniel Staines, who was more than 1000km away in Mandurah.

It's been reported that he was asked to make a voluntary statement but he was ruled out by WA police as having any involvement in Cleo's disappearance.

Reply
Upvote
Best news ever. Serious kudos to the cops too.
K
km 7 months ago