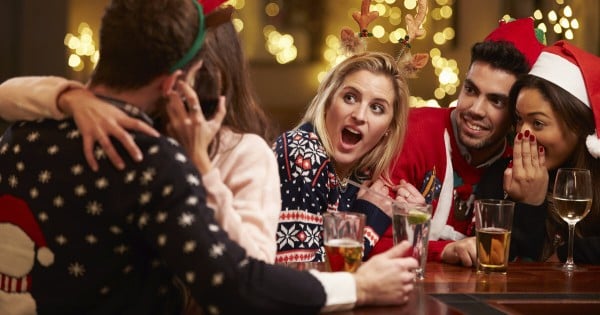 Is a drunken pash at the office Christmas party cheating or just a spur of the moment seize the moment mistake?

“When it came to drunken snogs with strangers in nightclubs that ‘didn’t mean anything’, they were ‘harmless’ – when it was you doing the snogging, not so if it’s your partner, that’s cheating!” sexpert Tracey Cox recently told the Daily Mail.

“With kissing it very much depends on where it was done, what state you were in and who it was you were kissing.”

So I polled the Mamamia office and I can say au contraire.  The general consensus here is that kissing is cheating, no matter who’s doing it and when.

If you get totally wasted and make out with someone at a bar you’ve never met before and will never see again, you should drink less, but also, that’s not cool. However it’s less worrying than if you’d been crushing on that guy from IT (lol) all year long and then kissed him.

Because you’re going back to work, where you will have a working relationship with him and see him – for many more hours a day than you see your partner.

The Daily Mail informs us: “Have intercourse with someone else and you have well and truly cheated.”

Good to know. Cross that one off the list!

For some, though, even a cuddle is inexcusable.

“A friendly hug at the end of the night usually just signals affection but press your pelvises close, your breasts into their chest and snuggle your face into the nape of their neck, holding the cuddle for longer than truly necessary, and it moves into something else.”

Note to self: do use pelvis when hugging unless intending to signal readiness to mate.

According to a study conducted by HuffPo, 90 per cent of women think “passionately kissing someone else” is cheating and 75 per cent of dudes.

The moral of this story is: if you make out with Brian from accounts this Christmas party season, it’s cheating.