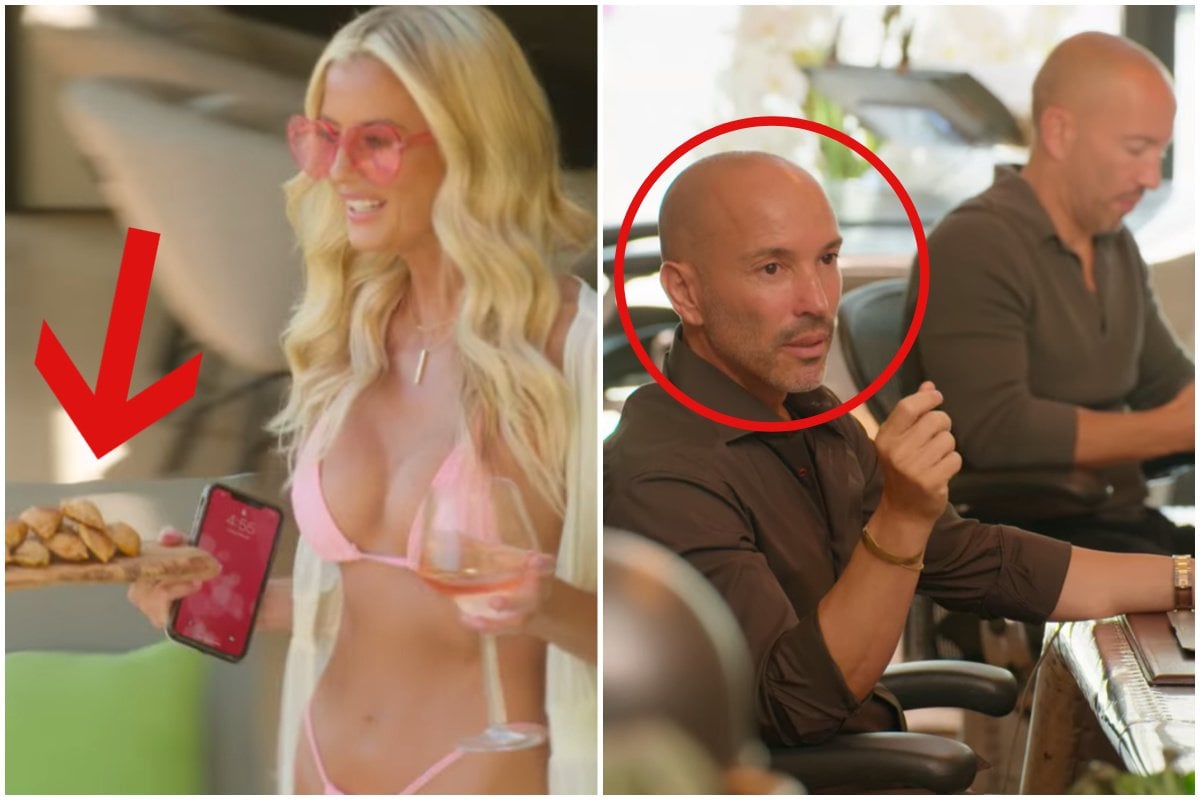 I need to put something on the record. As a matter of urgency.

Christine Quinn is the gift we did not ask for but everyone needed in 2021.

You see, the makers of Selling Sunset are highly skilled at a few things:

- Selecting a beauty filter to apply to the entire show

But they also have their weaknesses. The things they struggle with. Most notably:

- Creating a story that makes sense

Which is why I'd like to pose just a few quick questions, if I may.

1. Did the fight between Christine and Emma actually happen? Because it sounds a lot like a lie.

Hurry up and tell the truth. We're all very busy.

I volunteer to be on the jury.

Whenever anyone relays the story of the time Christine 'caught' her boyfriend cheating, it trails off into a strange sequence of words that no longer make sense. Mostly because I'm fairly certain the story is fictional. Which makes it hard to get the facts straight.

Apparently Christine banged on the windows of Emma's car? But was Emma with the guy at that point? Where was he? WHY DIDN'T CHRISTINE GET MAD AT HIM?

2. Did this man seriously date Christine, Emma AND Heather?

The moment Christine casually mentions that this mystery man also dated Heather, after he dated Emma but before he proposed to her (what), I knew this show was broken.

It's actually semi embarrassing for Christine to be caught so blatantly in a lie but also, I think she just wants to hate the person her ex dated straight after her? For no reason? Which is entirely valid? And we've all been there?

3. Does anyone here know anything about selling a house?

You can't just take a rich person to a house and then say 'escrow' and then ring a bell. I don't know a lot about real estate but I don't think that's how it... works. 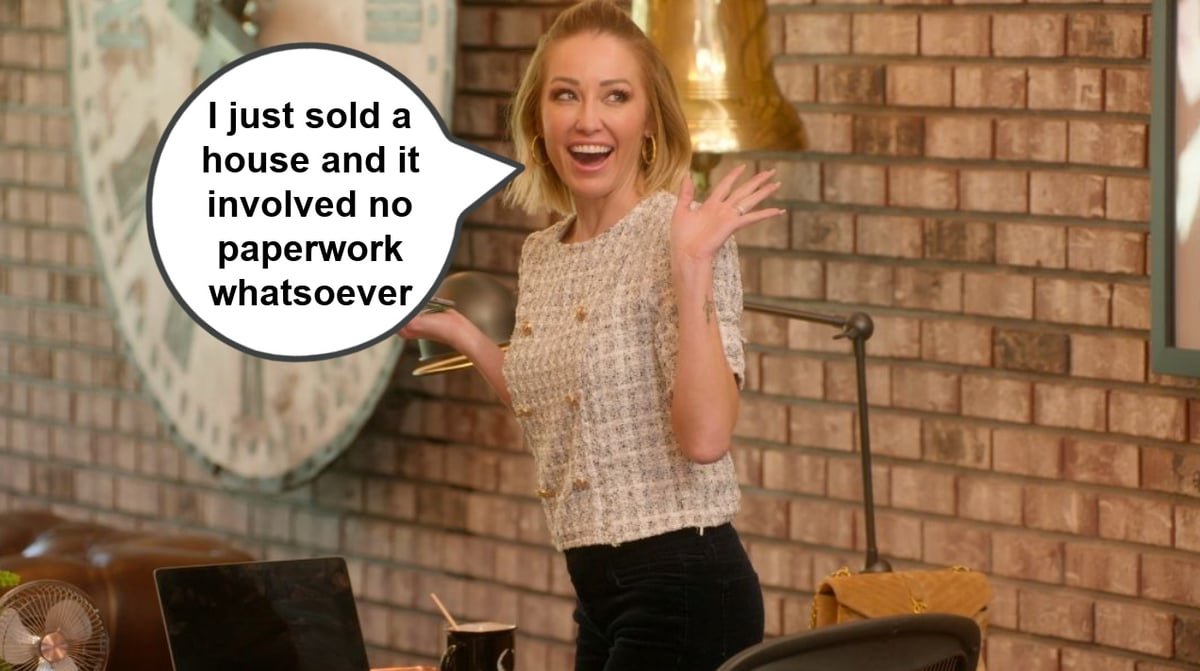 4. Why do we know so little about Brett?

Why don't I know anything about Brett Oppenheim.

For some reason I know that Jason used to date Mary, that they share two dogs, that he's always buying a new house, and that he's now suddenly dating Chrishell, but Brett is just like always on the phone?? Actually selling properties?

Jason has a Wikipedia page and Brett doesn't and that seems unfair?

5. Why has no one told Romain this entire show is made up?

No one is as stressed on this show as Romain.

You can see him getting increasingly agitated while the women fight, and he really takes on the emotional load of all his wife's colleagues passionately hating each other. 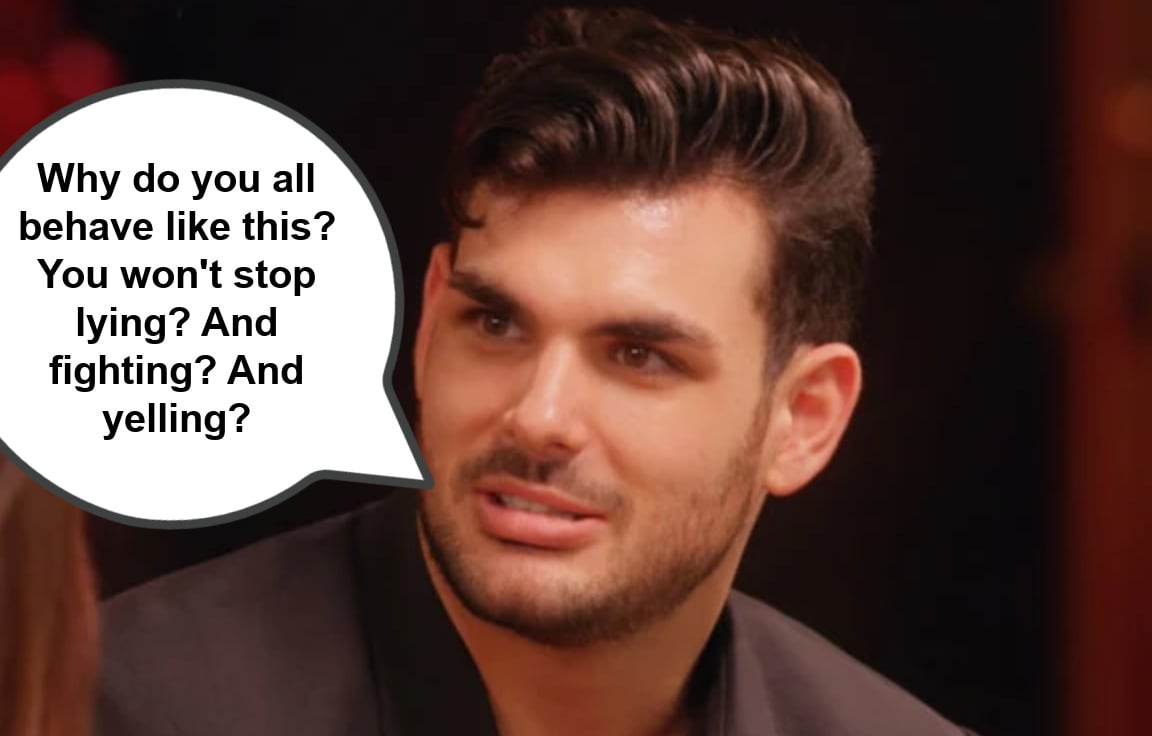 None of this is real? I'm sure someone was meant to brief you. At some point.

6. How did Emma make so much money from vegan snacks?

Emma's multimillion dollar company is called Emma-Leigh & Co and apparently it really is well known for its vegan empanadas.

Mostly because that's all they sell.

It sells a total of three products? And they seem really expensive? 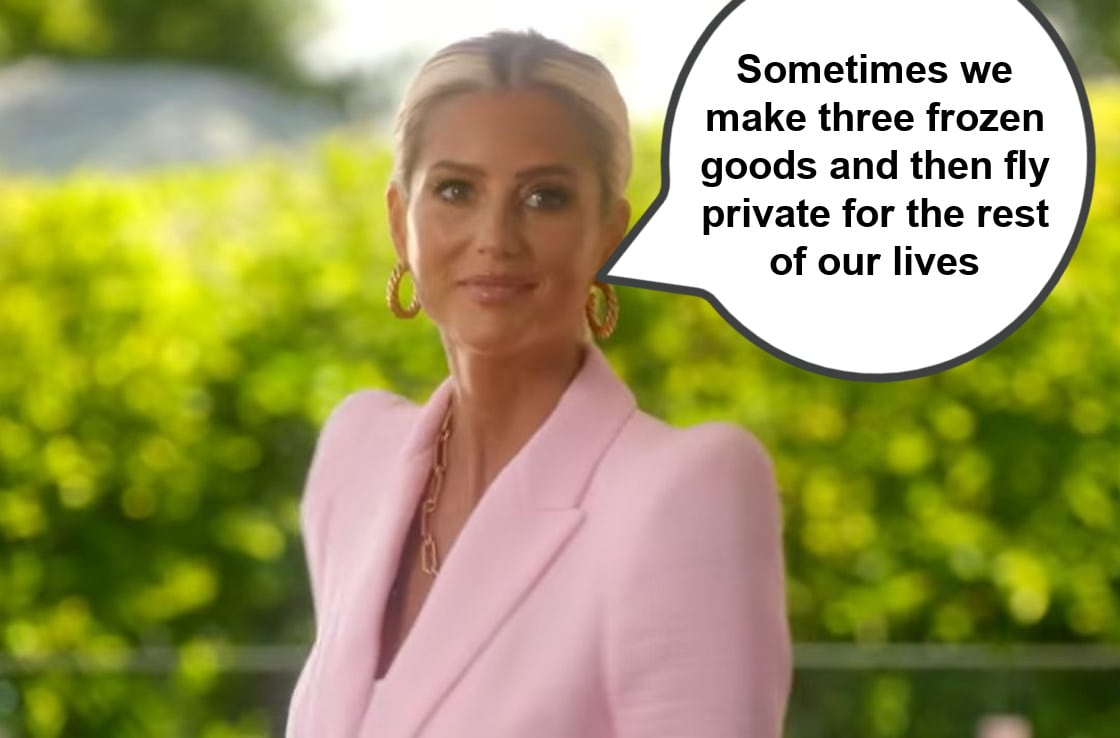 I feel like there's a piece of the puzzle missing. Here. Image: Netflix.

According to Emma's website, "I always sprinkle in my secret ingredient… LOVE."

Talk about an elephant in the room.

You can't just come back to Selling Sunset and not update us with how things are going with Adnan?

In the time it took for Heather to get engaged, Chrishell to get divorced and start a relationship with her boss, and Christine to get married, fall pregnant and have a baby, Davina has not sold the $75 million house. 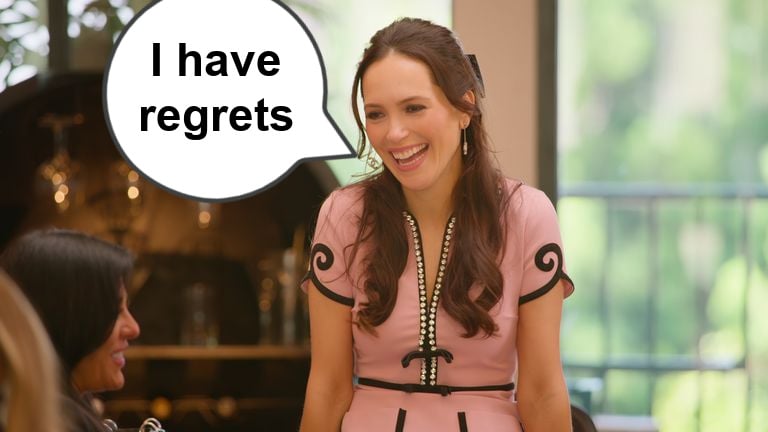 'I even quit my job and returned in the time it took me to not sell that house.' Image: Netflix.

We've all insisted we could sell an angry man's home and fought with our boss about it.

8. Sorry back to Christine - WERE YOU ENGAGED?

There is no way on God's green earth that Christine Quinn was engaged to the ex boyfriend who then proposed to Emma.

Sometimes we get jealous and we make up a story about the time a man proposed to us and we didn't tell anyone, except Davina.

And then Davina admits that never happened. And we get mad because good friends lie to cover for us??? Even when the lie makes no sense?

9. How is it that Emma and Heather are not the same person?

As if these women didn't all look pretty much the same already, suddenly you're asking me to believe that this person: 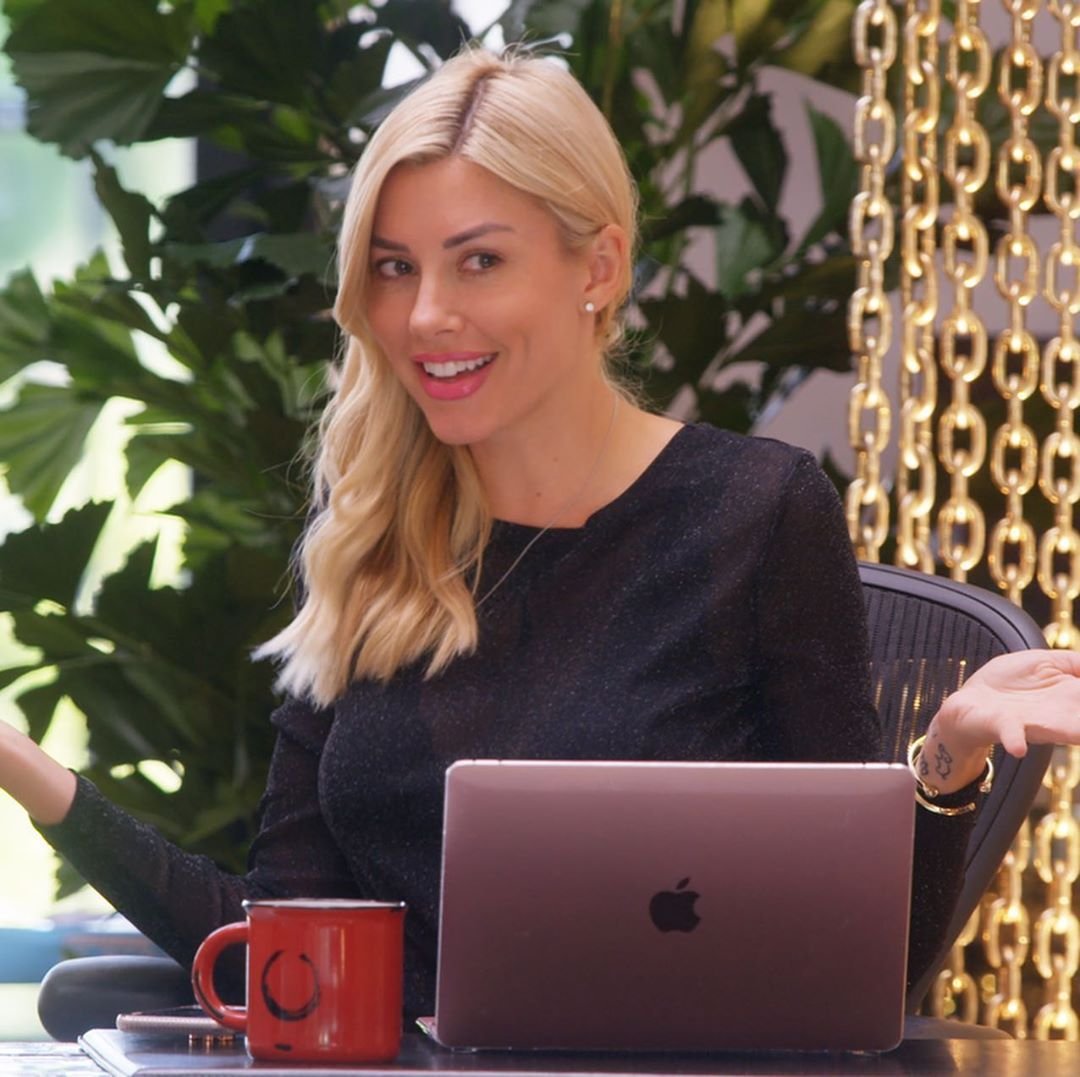 Is not this person: 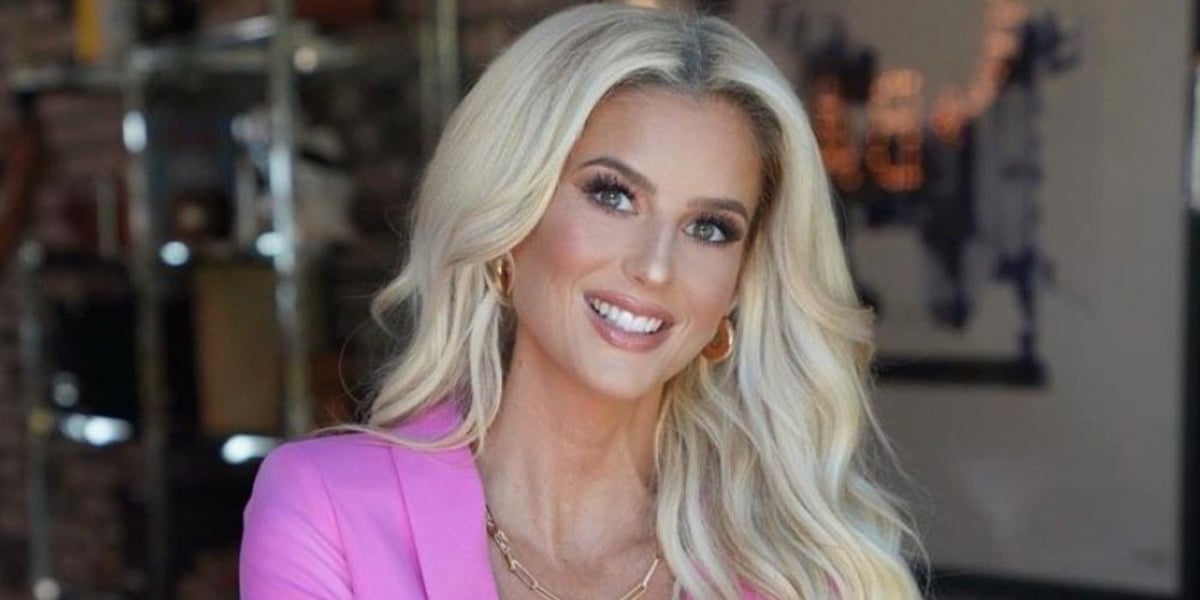 THEY HAVE THE SAME COLOURING AND FACE AND BODY, and it's very confusing.

10. Who let Vanessa get tangled up in this mess?

Vanessa seems like she was a normal person. Living her life. Trying to be a real estate agent.

And now she's here. Trying to make Christine see her healer. But a healer cannot help Christine. Because Christine is a demon.

Vanessa, may you please call a priest?

I get that it's been a wild 18 months but Amanza literally cries at Mary's dogs' birthday party.

Vanessa seems to cry every time she has a semi-serious conversation with anyone, probably because she's profoundly regretting her choices. 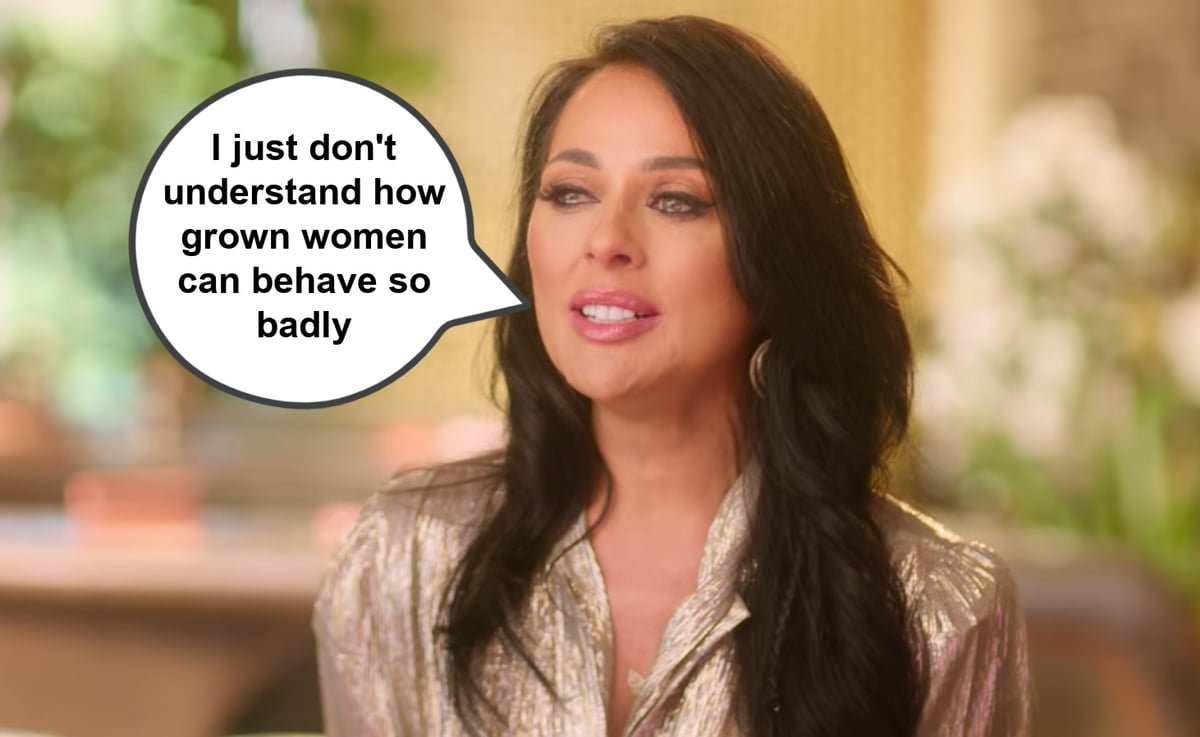 'Someone needs to stop them.' Image: Netflix.

Christine cries when anyone challenges her because she's like I JUST HAD A BABY and that's fair but then why are you... here. 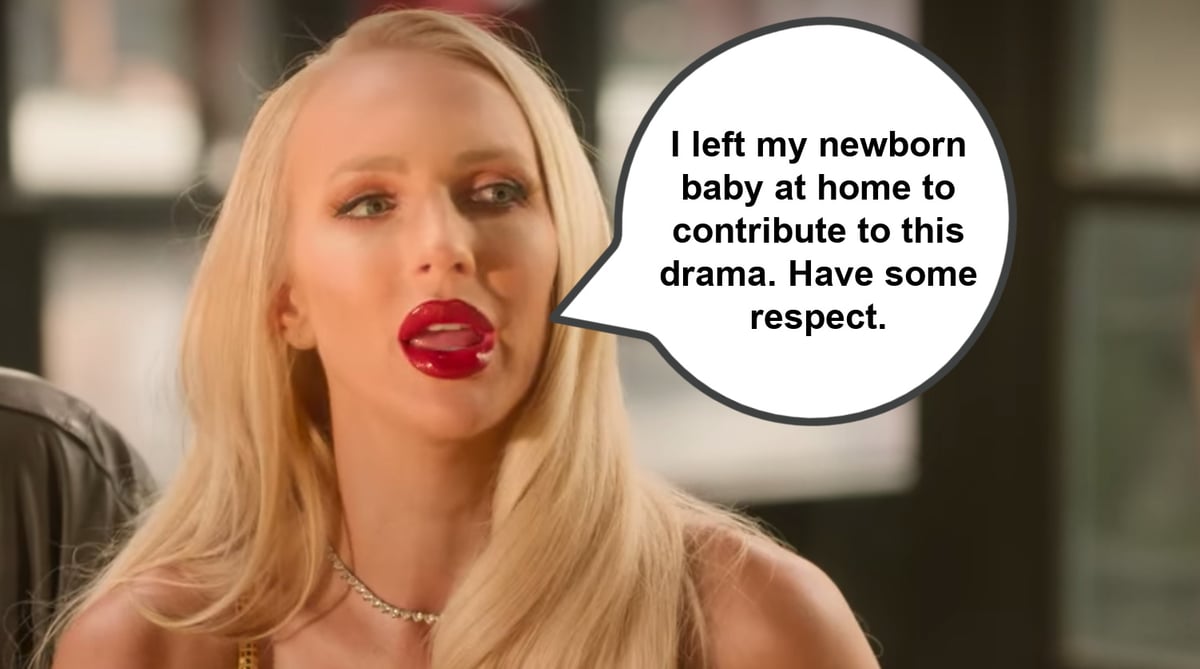 'It's really hard lying this much when I'm so tired.' Image: Netflix.

I think we all need to take a few deep breaths and maybe step away from the cameras.

12. Since WHEN are Jason and Chrishell together and how the hell did that happen?

You can't just drop that bombshell at the very end of the season?

Like were we meant to see clues? Because I didn't see any clues.

Apparently they announced they were dating in the break between seasons four and five but HOW?

Now I'm going to have to watch another hell fire of a season to understand.

There goes another 5 hours.

We can only hope someone has CCTV footage of the time Christine yelled at Emma, and we get the opportunity to interrogate a certain mystery man about whether he a) dated everyone, b) proposed to Christine, and c) would be interested in joining the Oppenheim group.

Reply
Upvote
2 upvotes
Yes love this!!!
Definitely production knew Jason & Chrishell were dating so many cut to views of Jason’s reactions. Like when Chrishell flashed ahem I mean flirted with Simu Liu. Plus the close ups of Chrishell when Jason had an “announcement” to make at the end. They relished knowing we knew they knew but did they all know 🤔
And did some digging the Christine/Emma/Heather ex is Peter Cornell who DOES work for the Oppenheim Group in the Entertainment & Sport Division. Time to Franchise the heck out of this show!!!
P
parisminette 2 months ago

Reply
Upvote
1 upvotes
I just want to know how Christine can behave so poorly and not have people approaching her in the street telling her she’s the devil!
I also want to tell her the name of a great psychotherapist to help her with what very much appears to be a personality disorder. 😅 I charge her with being a lying meanie who flaunts her wealth way too much. My sentence is, she has see a therapist for a week minimum. She has to sincerely apologize to everyone and announce at a party that she was wrong - whilst wearing last seasons Chanel.
News
General
Opinion
True Crime
Politics
Sport
Explainer
Entertainment
Celebrity
Reality TV
Movies
TV
Books
Rogue
Royal
Lifestyle
Beauty
Fashion
Weddings
Home
Wellness
Health
Fitness
Travel
Food
Parents
Before The Bump
Pregnancy
Baby
Kids
Teens
School
Parent Opinion
Work & Money
Money
Finance
Career
Lady Startup
Relationships
Sex
Dating
Separation
Friendship
Family
Real Life
Couples