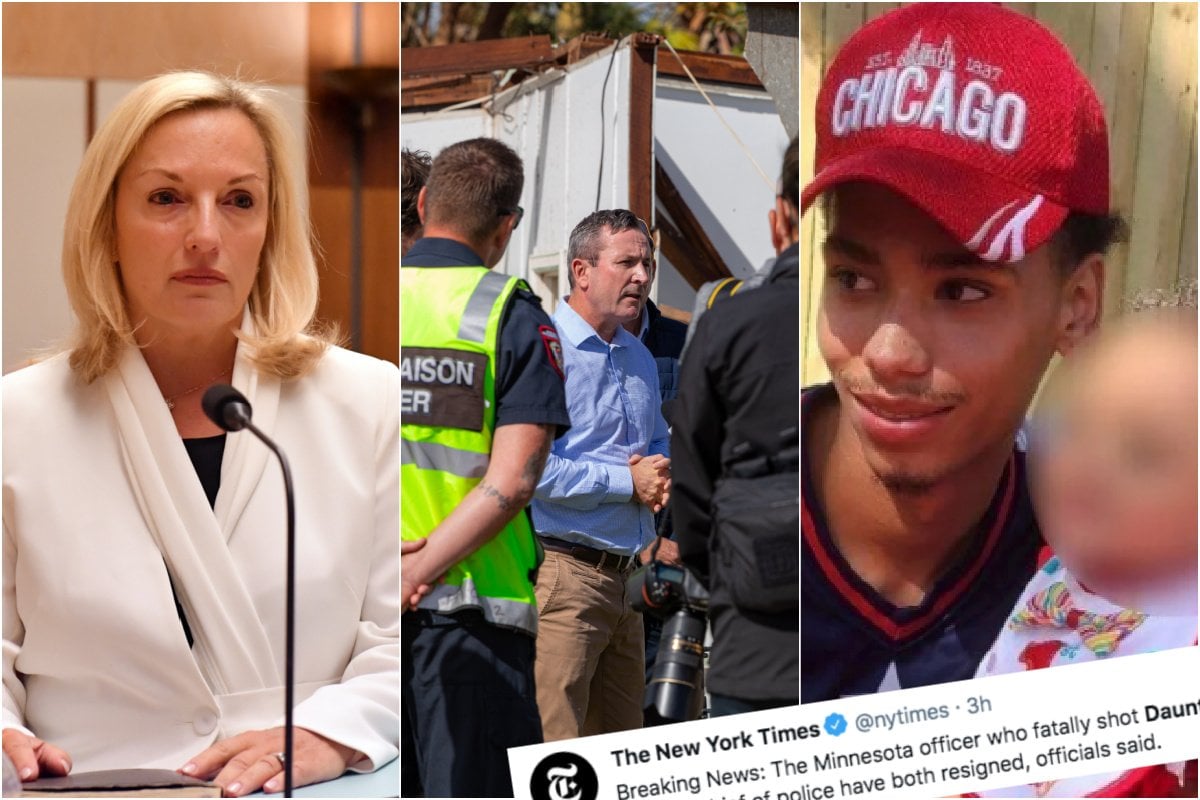 Former Australia Post chief executive Christine Holgate has requested an apology from Prime Minister Scott Morrison for a parliamentary diatribe she labelled "one of the worst acts of bullying I've ever witnessed".

Ms Holgate resigned from Australia Post in November 2020 after Mr Morrison angrily condemned her in parliament over a luxury watches scandal.

In a Senate hearing on Tuesday, she launched an explosive attack on the prime minister and Australia Post chairman Lucio Di Bartolomeo.

CHRISTINE HOLGATE: "I lost my job, a job that I loved, because I was humiliated by our Prime Minister for committing no offence," former Australia Post boss Christine Holgate says. #auspol pic.twitter.com/aBokhR0E3t

Ms Holgate said she lost the job she loved because she was "humiliated by our prime minister for committing no offence and then bullied by my chairman".

She said Mr Di Bartolomeo unlawfully stood her down under the direction of the prime minister, making her leadership untenable.

In a subsequent ABC interview on Tuesday night, Ms Holgate said she wanted an apology from Mr Morrison over his remarks in parliament in October.

"My own observation is [bullying and harassment] probably happens more in this Canberra bubble than it does outside. It seems to be a special place with its own rules. But they are not good rules and they need to be changed." – Christine Holgate #abc730 pic.twitter.com/J95JtwYZ5i

Mr Morrison said at the time: "She's been instructed to stand aside and if she doesn't wish to do that, Mr Speaker, she can go."

Ms Holgate insisted she committed no offence over her gifting of four Cartier watches to executives after they secured a major deal related to the "[email protected]" banking service.

A West Australian woman who suffered a rare blood clot after receiving the AstraZeneca COVID-19 vaccine is recovering well after a period in intensive care.

The woman in her 40s presented at the emergency department of a regional WA hospital about a fortnight after receiving the jab in mid-March. She was then flown to Royal Darwin Hospital where she was admitted to intensive care.

She is now in a stable condition.

A woman in her 40s is being treated for WA's first case of a vaccine blood clot. @JessicaPage7 #7NEWS pic.twitter.com/u1N7A2bteY

About 700,000 doses of AstraZeneca vaccines have been administered in Australia, so the two cases equate to a frequency of one in every 350,000 people. The Pfizer jab is now the preferred option for people under the age of 50.

But Mr Cook said anyone under 50 in WA will still be able to request the more widely available AstraZeneca vaccine once informed consent arrangements are finalised.

On Monday, an 80-year-old man died from COVID-19 Queensland, the first death to be recorded in the state in just under a year. He was a returned traveller who had been in the Philippines.

Premier Mark McGowan will use the prime minister's visit to Western Australia to discuss financial assistance for people affected by Tropical Cyclone Seroja.

Scott Morrison arrived on Tuesday night for his first trip to WA in 18 months.

It is expected to span several days and include a visit to the regions after Mr Morrison addresses business leaders in Perth on Wednesday.

Communities battered by the cyclone could be out of power for weeks with McGowan likening the damage to a "war zone."

WA Premier Mark McGowan is in touch with the Prime Minister for a disaster relief fund which is likely to exceed $18 million, following the state's cyclone disaster. #9News pic.twitter.com/q5mi22pPJO

A combined state and federal disaster relief package for communities battered by Seroja is yet to be finalised but is expected to exceed the $18 million spent on the Wooroloo bushfires which destroyed 86 homes near Perth in February.

Mr McGowan said he had been in regular contact with the prime minister as authorities continued to assess the damage.

Up to 70 per cent of properties in the popular coastal tourist town of Kalbarri, 580 kilometres north of Perth, are thought to have been damaged by the cyclone which hit late on Sunday as a category three storm with winds up to 170km/h.

PM urging premiers to help the country get 'back on track' with vaccination rollout.

Scott Morrison says national cabinet needs to return to an "operational footing" to get the coronavirus pandemic response back on track.

The prime minister has brought forward the next meeting with state and territory leaders from May 7 to April 19, with subsequent meetings to be held every fortnight.

The federal government has faced heavy criticism for axing a timetable for the vaccine rollout as it fell well short of initial targets.

"I have requested that national cabinet and our health ministers move back to an operational footing - to work together, closely, to tackle head on the challenges we are all facing with making our vaccination program as good as it can be," Mr Morrison said.

National cabinet to meet twice weekly in Morrison's effort to get vaccination rollout 'back on track'. https://t.co/aq9c1jJxdl via @ConversationEDU

"There are issues we are trying to deal with as a federal government, and I have been upfront about those.

"But amongst the states and territories, they are also tackling their own unique issues and working together we are all going to be in a better position to find the best solutions."

He said the more regular meetings would continue "until we solve the problems and get the program back on track".

There have been 1.234 million vaccine doses administered nationally, including 56,000 over the past day.

Former Liberal staffer Brittany Higgins, who alleges she was raped by a colleague inside a ministerial office in Canberra, will publish a memoir next year.

Ms Higgins' allegations about an assault at Parliament House in 2019 sparked a debate across the country about the treatment of women.

Penguin Random House Australia called Ms Higgins "a young, brave voice and a pioneer for a new generation" and said it would publish her book in 2022.

I feel privileged to be afforded the opportunity to share my experience inside Parliament House. I’m proud to commit half of the royalties for each book sold to the Canberra Rape Crisis Centre who were a lifeline for me in the wake of my sexual assault. (1/2) pic.twitter.com/VWdxmwp4ei

"Brittany's story, in her own words, will be a call for desperately needed reform, and a watershed moment for Australian women in public life," the publisher said.

"This book will shine a light on the toxic workplace culture inside the corridors of power and provide a first-hand account of what it was like surviving a media storm that turned into a movement," Ms Higgins said in a statement on Tuesday evening.

She said half of the royalties of each book will be donated to the Canberra Rape Crisis Centre.

Wright, 20, was killed at 2pm on Sunday afternoon after being pulled over by police. He told his mother on the phone minutes before his death it was because he had air fresheners hanging in his rearview mirror.

Potter says she mistook her gun for her Taser as he tried to escape arrest.

Breaking News: The Minnesota officer who fatally shot Daunte Wright and the chief of police have both resigned, officials said. https://t.co/qlbaPUPWEh

Brooklyn Center Police Department says it was because of a traffic violation related to expired registration tags. But upon pulling Daunte Wright over, officers discover he has a warrant for his arrest - something his older brother, Damik Bryant, has since told CNN he believes Wright did not know.

During police attempts to arrest Wright, a brief struggle ensued, and a shot was fired. Gannon admitted that the shooting was an accident, but has since stood down from his role.

Biden to lay out US Afghanistan plans.

President Joe Biden will formally announce plans for the withdrawal of US troops from Afghanistan on Wednesday, the White House says.

"The president will deliver remarks tomorrow at the White House on the way forward in Afghanistan, including his plans and timeline for withdrawing US troops," White House spokesperson Jen Psaki says.

A senior administration familiar with the plans says Biden wants to complete the exit of US troops by September 11, a date that would miss a May 1 deadline for withdrawal agreed to with the Taliban by his predecessor Donald Trump.

The US invaded Afghanistan following the September 11, 2001 attacks and overthrew the Taliban regime.

It is the longest war the US has ever waged.

In a statement last month, the Taliban threatened to resume hostilities against foreign troops in Afghanistan if they did not meet the May 1 deadline.

According to official information, there are currently about 2500 US soldiers in Afghanistan. At its peak 10 years ago the number was about 100,000.

- The owner of the massive cargo vessel that blocked the Suez Canal is being asked by the Egyptian government to pay AUD $1.17 billion in compensation. The Ever Given has been seized by authorities and won't be allowed to leave the country until the matter is settled.

- US President Joe Biden has proposed a summit meeting with Russian President Vladimir Putin during a telephone call.

- America has paused the use of Johnson & Johnson's COVID-19 vaccine after reports of six serious blood clots.

- The Queen will carry on with official royal duties only days after Prince Philip's funeral.

- Hunger-striking Kremlin critic Alexei Navalny is having difficulty speaking and has lost more weight, his wife said in a social media post after visiting him in prison. Navalny returned to Russia in January after recovering from what German doctors say was nerve agent poisoning. He was jailed in February for two-and-a-half years for parole violations.

Reply
Upvote
3 upvotes
Christine Holgate SOOOOO deserves an apology from Morrison. It was disgraceful behaviour and so typical of him. It was menacing the way he spoke about her in parliament. When will people realise this mans character is pure nasty. I hope she sues the lot of them for the remainder of her contract and damages against her reputation. Christine speaks so well, she would run rings around the ‘marketing man’. CHRISTINE FOR PM. That is what Australia needs.
C
cat a year ago

Reply
Upvote
@gypsy I’d rather she wasn’t PM, but ScoMo has faced the first test in whether he’s really changed his approach to women, and absolutely tanked it. Unsurprisingly. He’s not just nasty he’s impressively dense and tone deaf- I guess that’s why he couldn’t make it in marketing.
G
gypsy a year ago

Reply
Upvote
@cat   Oh anyone would be better than him. She speaks well, easy to listen to. I was joking I’m sure she doesn’t desire to be a politician. He is just soooo off putting. He left the tourism industry unceremoniously, I think twice, ? over him. He suppressed that too he is champion of suppression. This system is sluggish.
G
gypsy a year ago

Reply
Upvote
3 upvotes
Re: State Premiers meetings - Interesting how he isn’t coping with the rollout at all and wants them to achieve it. He is supposed to be the ‘boss’. If we ever succeed in having the nation vaccinated he will take the credit. It has been a debacle. For a developed country it is abysmal. I tell you he and his ministers are totally INEPT.
C
cat a year ago