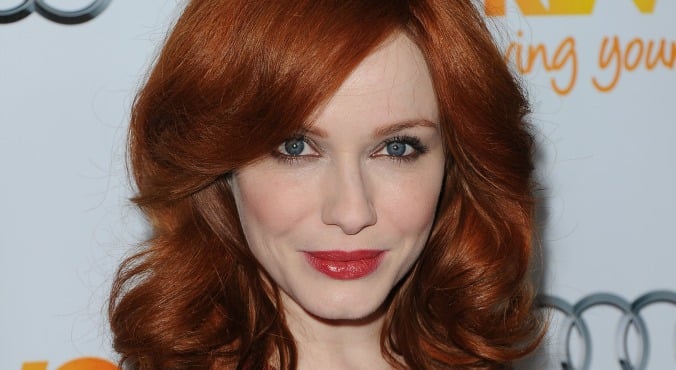 There must be something in the water at the moment, because not one, not two, not even three, but four celebrities revealed major new hairstyles overnight.

She could be as famous for her signature fiery red locks as she is for her role as Joan from Mad Men, but Christina Hendricks has changed all that.

RELATED: We can’t keep up with The Bachelor’s Sam Frost’s hair transformation

A natural blonde, Hendricks has returned to her lighter roots, showing off this strawberry blonde colour in her latest  Clairol Nice N Easy campaign.

The 39-year-old actress originally went red as a 10-year-old, with her mother dying her hair after she fell in love with the character Anne of Green Gables.

With the final season of Mad Men due to air in April, Hendricks decided it was the perfect opportunity to test out being blonde once again.

"I thought it would be refreshing to go back to blonde," she told US Weekly.

"When I first looked in the mirror and saw the golden-honey colour, I felt nostalgic. It was like I was looking at a version of me from 20 years ago!".

Australian celebrity Sophie Monk also decided it was time for a hair refresher. The 35-year-old took to social media to reveal her balayaged new 'do.

"Anyone fool who has thought I'm a dumb blonde can suck it... I'm now a "brown/ash/blonde bimbo!" Sophie Monk joked in her Instagram caption.

RELATED: Woke up like this? Sophie Monk’s beauty disaster

We haven't seen a brunette Christina in years, but the singer left fans reminiscing about the singer's darker hair days after she tweeted a picture of tumbling brown curls.

Unfortunately the 34-year-old's new 'do is not permanent (it's probably a wig) and it part of Aguilera's upcoming appearance on TV show Nashville.

Looks like actress and singer Hilary Duff is as obsessed with the Kardashians as the rest of the world, taking hair inspiration from none other than Kylie Jenner.

She thanked her hairdresser for "turning me into a mermaid last night".

It's an edgy look for the former Disney girl. Lizzie McGuire who?

Take a look at some our other favourite celebrity hair transformations.