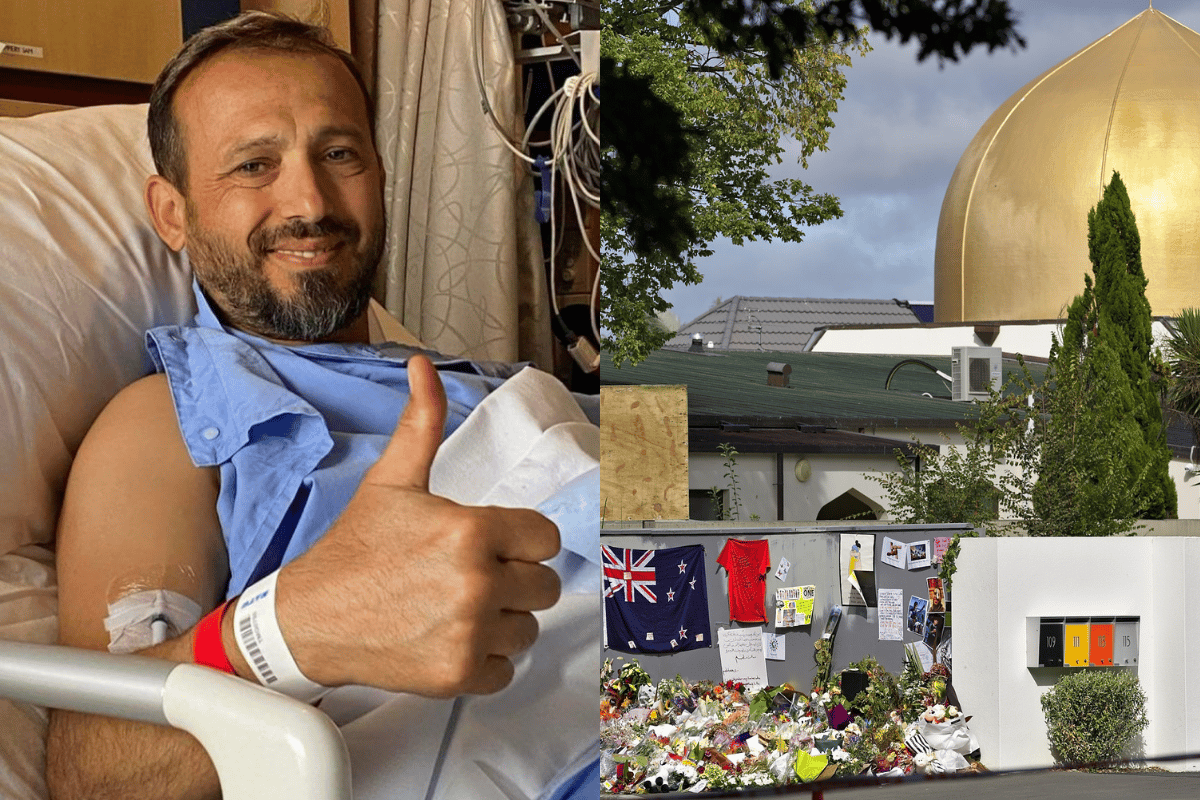 On March 15, 2019, an Australian man murdered 51 members of the Islamic community and injured 40 others in a terrorist attack at a Christchurch mosque. The man was sentenced to life without parole, and it was the first time the full-time term was imposed in New Zealand.

We have since heard the stories of those impacted by the attack, delivering stories of grief, heartbreak, anger and confusion.

One of those being from a man who was at the mosque at the time of attack.

His name is Temel Ataçocuğu - a Turkish man, who has been living in New Zealand for over a decade. He was shot with nine bullets that day. And somehow, he managed to survive, undergoing approximately 20 surgeries in the years since.

Watch: Sara Qasem delivers her victim impact statement at the sentencing of the Christchurch mosque terrorist. Post continues below.

But while sharing his story with a radio reporter named Mel Logan, Temel found love.

Logan had phoned Temel a year on from the terrorist attack, asking to meet for a news article in regards to the sentencing hearing in August 2020. Logan was planning a story on "the shattered Christchurch Muslim community and how they were recovering through cooking and social groups". So when a picnic among the local community was organised and Temel invited Logan to attend, she said yes.

It is here that the love story began, according to a profile of the pair by NZ Herald.

"We were just friends. We'd catch up, go walking ... I never thought we would be boyfriend-girlfriend. She understands my circumstances and looks after me. She has a big heart," Temel said in the piece.

Logan, a mum of two teenage boys from a previous relationship, said: "We're just trying to stay in the moment. We go out and enjoy lovely scenery. We don't have to talk if we don't want to, we just enjoy each other's company. It's a very personal thing."

Writing about his experience in The Guardian, Temel, who is also a father of two teenage sons, said the scars of the Christchurch mosque shooting aren't just physical, but also mental.

"Three years after the terrorist attack, my anxiety is still challenging. I'm still not confident about a lot of things. I can't focus, I have memory problems. The trauma will haunt me all my life. But I'm not giving up. If you give up hope, everything's over," he said.

On that day in March 2019, the terrorist travelled from Dunedin up to the city of Christchurch, a journey of about 360 kilometres. This fact stuck with Temel.

"He did this journey for hate. I thought, how about I do the opposite? I will reclaim this journey by walking for peace."

So on March 1, Temel set off from outside the terrorist's home in Dunedin and started his walk to Christchurch. And Logan was right by his side.

Given the amount of injuries he sustained from the shooting, the walk was understandably difficult for Temel. But he aimed to arrive at the scene of the attack - the Al Noor Mosque - by the date of the anniversary, which is today. And he achieved his goal.

As the Australian National Imams Council (ANIC) said today, "March 15 2022 is a date which is etched into the collective mind of Muslims around the world. It was a massacre against a people simply because of their religious belief and activity. The men, women and children were praying at the time in the mosques. In New Zealand and around the globe, including in Australia, people continue to gather and mourn the victims and pay their respects to the families of the victims in commemoration of this tragedy."

And this is exactly what Temel set out to achieve: grieve the loss of those who were killed or have suffered, raise much needed awareness and funds for charity and make a difference - a mission for peace.

"When I started my walk, I was so scared at the beginning that someone would attack me or swear at me. But after the first day, second day, third day, I had people around me, walking with me. There was lots of tooting, truck drivers honking, people saying cheers and clapping for me, lots of positive things. People have stopped for hugs, to shake my hand. And I realised I don't have to be scared because there are lots of lovely, beautiful people out here. I am safe," he shared with The Guardian.

On his journey, Temel came across people from all walks of life cheering him on. There were people who made Temel blueberry muffins, some wanting selfies, people offering to walk with him or in his place when he was sore. When he walked past a local girls' high school, the students had made signs saying "we are with you Temel".

"I was so emotional when I saw that, nearly crying. I realised my peace walk was working. Even though I am following the route of the terrorist, I try not to think about him at all. My aim is to delete him from history, to delete his hate and his ideology from this land. I hope people will remember what I am doing instead," Temel noted.

It is important to acknowledge that Islamophobia still exists across New Zealand, and in Australia.

As ANIC's spokesperson and advisor Bilal Rauf said in a statement: "This was a massacre committed by an Australian very close to home. The massacre was preceded by ignorance, hate and a pervading and publicly stated anti-Muslim sentiment which was left unaddressed and allowed to fester and be shared. It is a constant reminder that Islamophobia and anti-Muslim sentiment is real, particularly for Muslim women who are readily identifiable by the religious attire they choose to wear. Vilification is real. Discrimination is real."

"The nature of the Christchurch attacks and their origin and effects online prove that treating online violence as less real is illusory and unhelpful," Dr Derya Iner said. "Islamophobia is not a 'Muslim' problem but a social cohesion risk. It requires national engagement if Australia (and New Zealand) is to live up to its multicultural legacy."

And this afternoon, Temel arrived to an awaiting crowd of hundreds who had gathered outside the mosque to see him.

He said to reporters on the scene: "I'm so proud of myself and I'm so proud of New Zealand's people. They are really great supporters and it's good to know there are really good people out there. In three years I've never been in the same spot. This was the first time I've been in the same place where I got shot. The last couple of hundred metres I couldn't control my nerves and my emotions, it was a release with tears."

He’s here: Temel Atacocugu has reclaimed the Christchurch terrorist’s journey, in the name of peace pic.twitter.com/OlpiKKFSBq

A survivor of the Christchurch mosque attacks has finished a gruelling 360 kilometre walk to arrive at Al Noor Mosque on the third anniversary of the attacks. https://t.co/lWM3SMDeoa

Temel Atacocugu sharing a message of unity: “We are one, terrorist none.” pic.twitter.com/k8o8Yhl2UB

"This peace is for anyone who has been affected by any extremism. It doesn't matter what colour, what nationality, what religion: anyone who's affected by violence. This is from us, for everybody. It does not belong to me. It belongs to humanity."

Ultimately, Temel hopes that people let go of their hatred, and realise we all aren't so different after all. 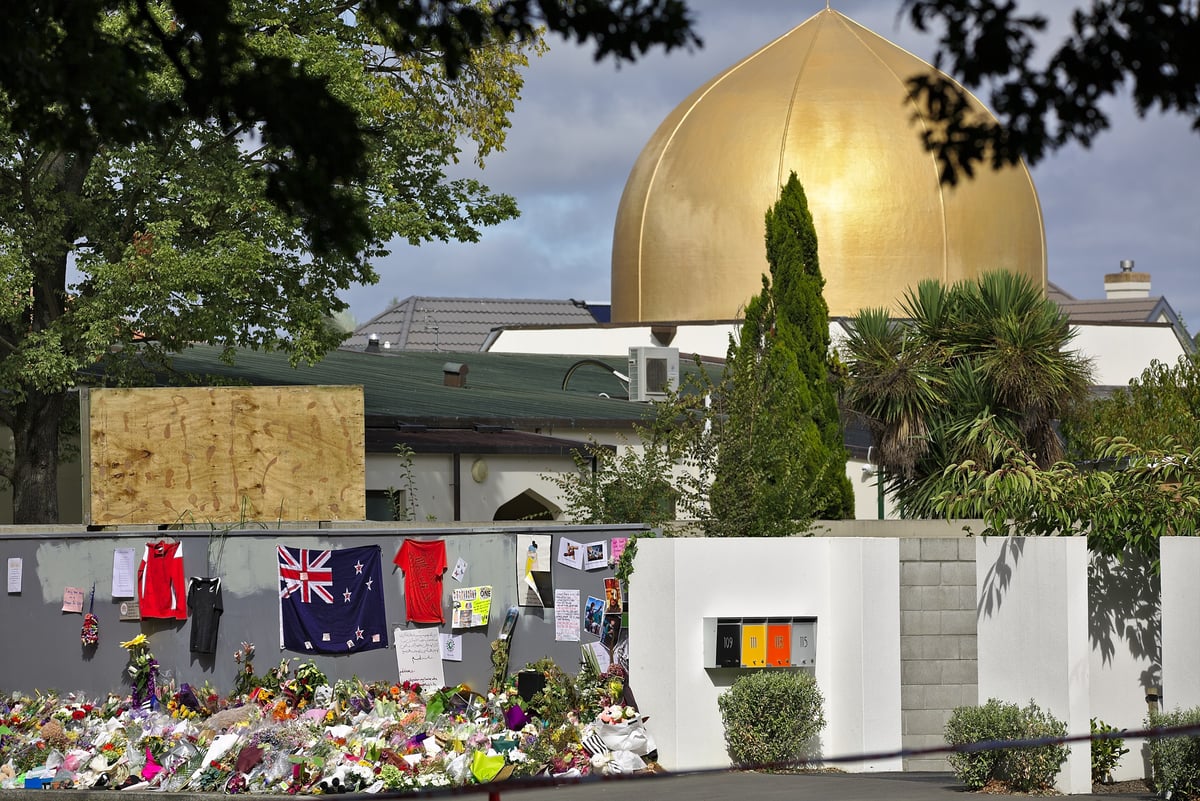