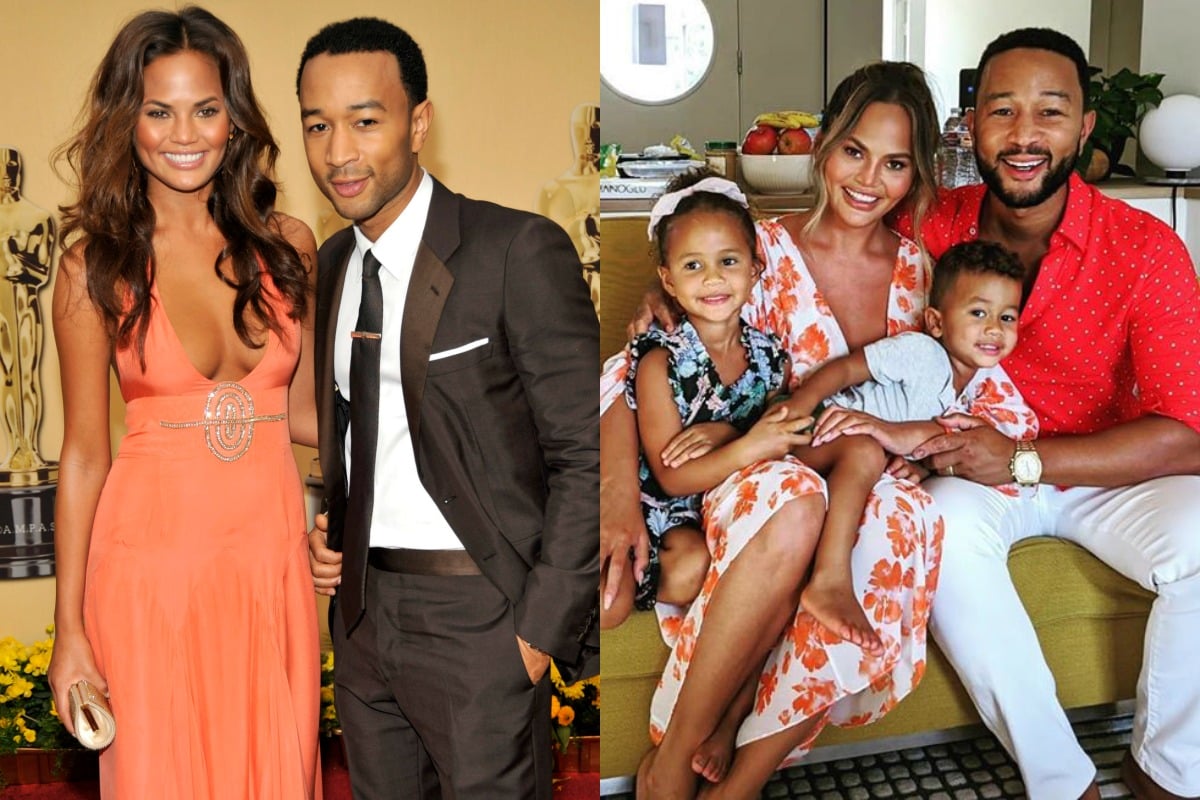 Chrissy Teigen and John Legend are one of Hollywood's favourite couples.

The model and musician, who first met on the set of a music video in 2006, are now married with two (almost three) children.

Here's where it all began.

When John Legend and Chrissy Teigen announced their third pregnancy. Post continues below.

In 2006, Chrissy Teigen met John Legend for the first time on the set of his music video for the song 'Stereo'.

"I walked into John's dressing room to meet him, and he was ironing in his underwear," Teigen told Cosmopolitan in 2014. "I said, 'You do your own ironing!?' He said, 'Of course I do.' I gave him a hug."

After that, the couple spent the entire day together.

"We did the music video and then we were together for like 12 hours. We spent the entire day together, me in my underwear and him in a full suit. I went to go say goodbye to him, then to his hotel, and we didn’t ever say goodbye that night," she later shared with Wendy Williams in 2014.

After their first day together, the couple took things slowly.

"I let him be himself for a while," Teigen told Cosmopolitan. "The worst thing you can do is try to lock someone like that down early on, then have them think, 'There’s so much more out there.' I played it cool for a long time. Never once did I ask, 'What are we?'

"Marriage was never my goal because I’ve never been very traditional. I was just happy to be with him." 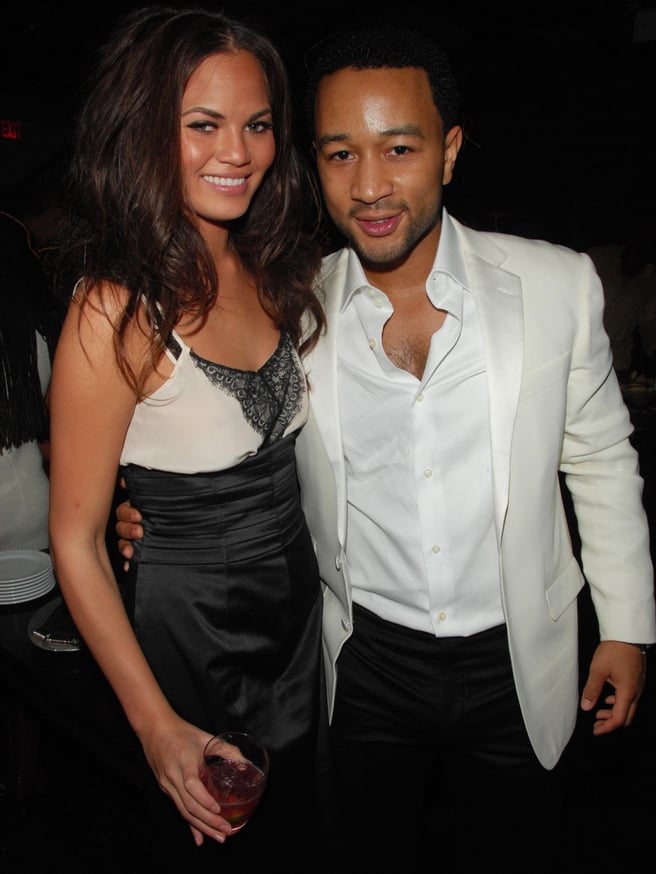 Teigen and Legend in 2007. Image: Getty. In a recent interview, Legend revealed that before meeting Teigen, he never seriously dated anyone.

"Yes, I did have a history of [cheating]. Definitely in my 20s," Legend shared with Dax Shepard on his podcast Armchair Expert.

"I think what happened for me, you go through a lot of your life in your teens and I was younger than everybody in high school and college, and so I just didn’t get a lot of girls. When I started to get that attention, I loved it," he continued.

In 2007, Teigen joined Legend on tour. But because of the stress and chaos of Legend's work life, the couple briefly broke up.

"I was on tour with him and he’d gotten sick," Teigen said. "He was feeling really bummed and stressed out. He was like, 'I can’t be in a relationship right now.' That lasted for one day. Literally, a day.

﻿"I knew it came from a place other than us not working. It was the stress of him having to maybe cancel a show, and he had never been in a real relationship—or so he says now. I always joke, 'Remember when you tried to break up with me?' He’s like, 'Yes, sorry. Big mistake.'"

Months later, the couple took a holiday to their now-favourite holiday destination, Lake Como, Italy. The same place that would later host their wedding and the backdrop for Legend's music video, 'All Of Me'.

Back to where it all began - Lake Como, Italy - first came here in 2007. A boat tour guide took us to a little spot on the lake and told us to make a wish. I asked for this to be the man I marry and have children with. I think John asked for the most perfect bite of cacio e pepe. Both came true, and here we are.

After fours years of dating, Legend proposed to Teigen during a holiday in the Maldives in December 2011. However, before the proposal actually took place, there were a few mishaps.

"I remember we got into a very big fight in the car on the way to the airport because we had opened our presents beforehand, and he had only gotten me a cookbook and a Crock-Pot," Teigen told FABLifeShow.﻿

"[The ring] was in my carry-on bag going through airport security, and security wanted to look through my bag and they wanted to look in that particular box," Legend later explained on Oprah’s Next Chapter in 2013.

"And Chrissy was standing right next to me and I was, like, 'Oh, my God. I’ve hid it so well this whole time but now as we’re just about to get to the Maldives she’s going to find out I have a ring in this box and it’s going to ruin the surprise and I’ll have to get on my knees in the airport.'"

But thankfully, the proposal went perfectly.

"We get to the Maldives and he had planned this beautiful Christmas. He knows how much I love Christmas... and this waiter comes out with a silver dome for dessert. So he opens up the dome and a ton of arugula falls out and then I kind of fish in it. And I see the little box and then you know, your heart stops and you get so excited," Teigen recalled.

"﻿There was no big grand speech or anything. I think it was just very lovely and sweet." 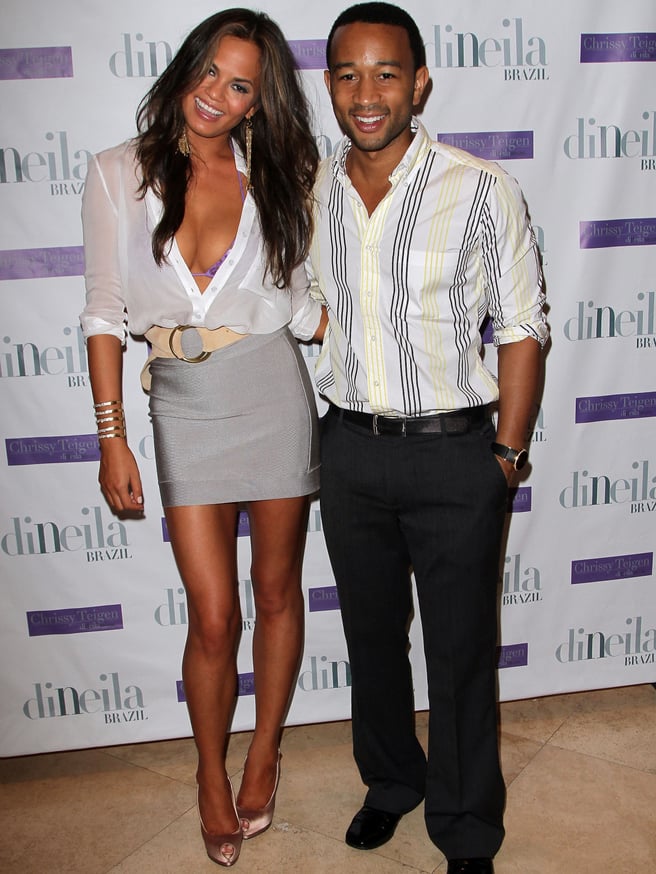 A few months after their engagement. Image: Getty. ﻿In 2013, Legend performed his song 'All Of Me' on Oprah's Next Chapter. The hit single was written for his soon-to-be wife.﻿

"I did cry when I heard it," Teigen told Huffington Post. "I’m emotion﻿al, but like I don’t really don’t cry at﻿﻿ things like that so yeah, it was beautiful. And live it’s pretty unreal."

Later that year on September 14, 2013, the couple got married in Lake Como; after officially tieing the knot at the New York City courthouse.

"We actually got married after going to a couple of Fashion Week shows at Vera Wang, ironically who actually did my dress, but we got married at the courthouse right after," Teigen told E! News.

"We are dumb and didn’t realise that our Italian wedding would not be recognised unless we had a real ceremony in New York City. So Irina Shayk was our witness – the most beautiful woman on earth!"

Two years later, the couple announced they were expecting their first child.

"John and I are so happy to announce that we are pregnant. As many of you know, we've been trying to have a baby for a while now. It hasn't been easy, but we kept trying because we can't wait to bring our first child into the world and grow our family," Teigen wrote on Instagram.

"We're so excited that it's finally happening. Thank you for all your love and well wishes. I look forward to all the belly touching!"

Teigen later told The Cut that the couple went through IVF to conceive. However, it didn't work the first time.

"You hear stories about IVF working the first try but you’ll hear a lot more stories about when it takes a few times," she said. "Ours didn’t work the first time, and it was devastating. You realise that a lot of it is luck, and you can’t blame things on yourself."

In a personal essay she wrote for Glamour, she said, "A year ago, in April, John and I started our family together. We had our daughter, Luna, who is perfect. She is somehow exactly me, exactly John, and exactly herself. I adore her.

"I had everything I needed to be happy. And yet, for much of the last year, I felt unhappy. What basically everyone around me—but me—knew up until December was this: I have postpartum depression."

After a few months of antidepressants, Teigen began to feel like herself again. But as she explained, there are still good days and bad days.

"Like anyone, with PPD or without, I have really good days and bad days. I will say, though, right now, all the really bad days—the days that used to be all my days—are gone," she said.

On November 21, 2017, Teigen shared in an Instagram video that she was pregnant again.

And after going through the process of IVF once again, their second child, Miles Theodore was born on May 16, 2018.

Hello, world! This is Miles Theodore Stephens - We are drowning in his little peeps and nuzzles. Our household feels overwhelmed with love. Thank you for all your well wishes!

"Hello, world! This is Miles Theodore Stephens," she wrote.

"We are drowning in his little peeps and nuzzles. Our household feels overwhelmed with love. Thank you for all your well wishes!"

In November 2019, the whole family appeared on the cover of Vanity Fair.

And now, in 2020, Teigen and Legend have announced that they are expecting their third child.

During the music video for Legend's latest song 'Wild', Teigen displayed a baby bump at the very end. The following day, she confirmed the news on her Instagram Stories. 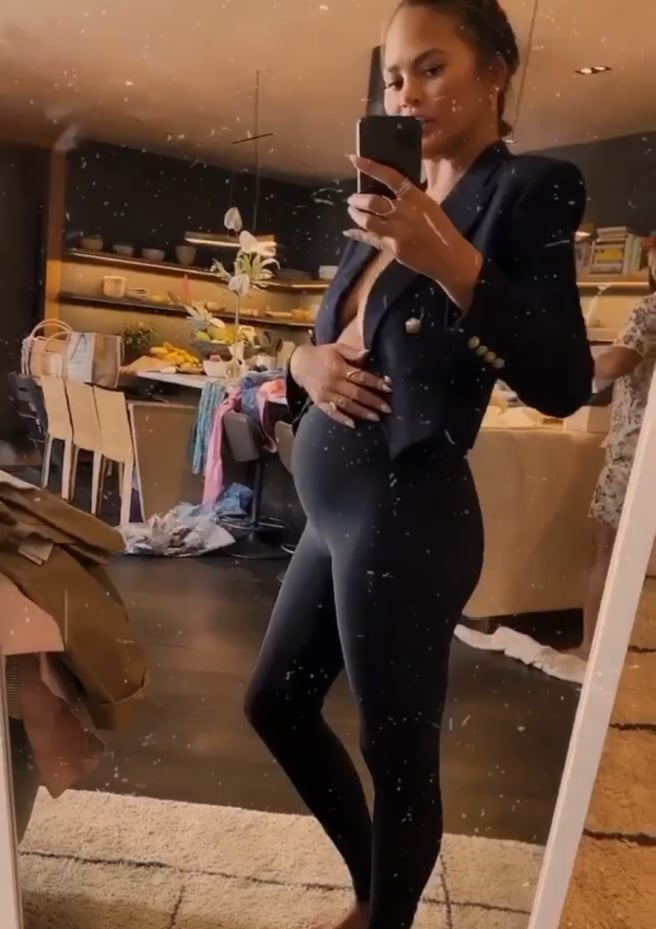