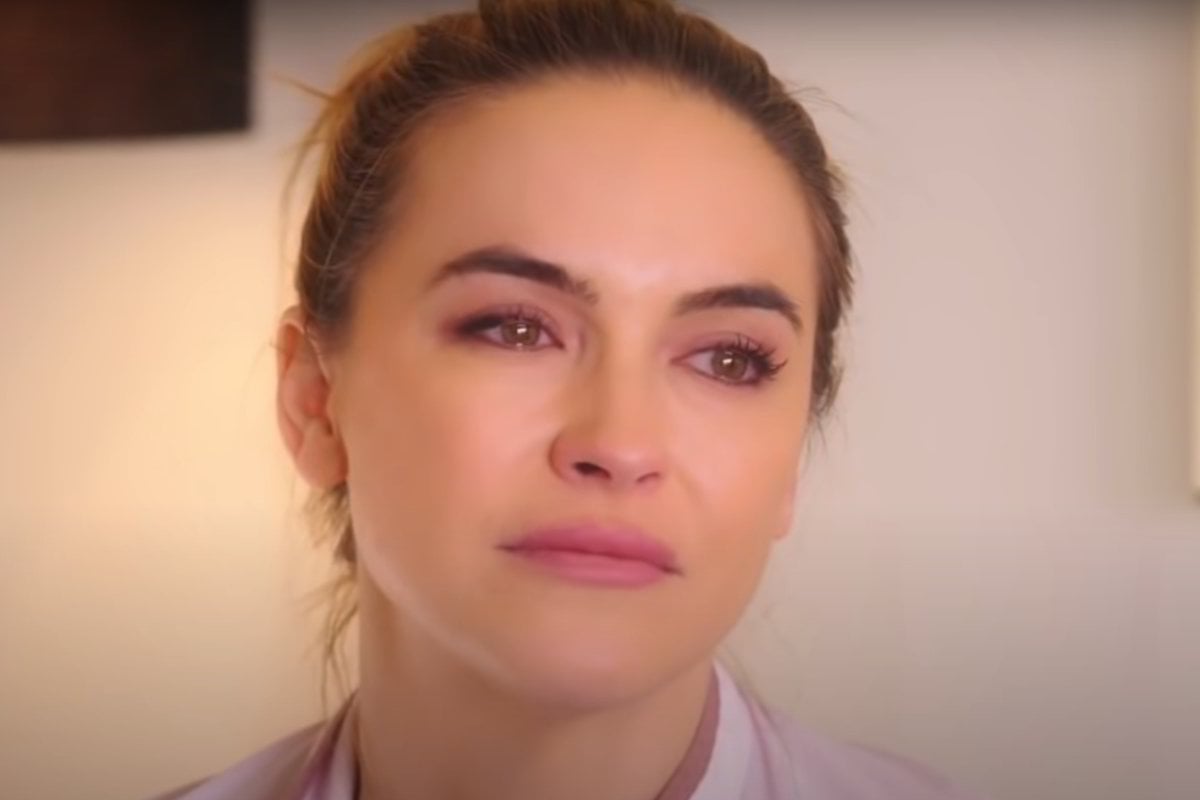 Warning: This post contains A LOT of spoilers for Selling Sunset Season 3. You've been warned.

The reality TV show, which follows a group of real estate agents from The Oppenheim Group, is jam-packed with a helluva lot of drama.

But in the final episodes of season three, there was one particular storyline which stood out more than the rest.

Watch the trailer for Selling Sunset Season 3 below. Post continues after video.

You see, towards the end of season three, news breaks in The Oppenheim Group office that up-and-coming agent Chrishell Stause has separated from her husband, This Is Us star Justin Hartley.

Except... the break-up news isn't just a surprise to the audience.

It's a complete surprise to Chrishell and her colleagues – Mary, Christine, Davina, Heather and Maya – as well.

In case you need a recap, here's how it unfolded on the show.

In November 2019, when the season was filmed, Chrishell organised a charity fundraiser.

At the fundraiser, one of the items up for action was a "cup of coffee with Justin Hartley" as well as a signed This Is Us script. At the event, Chrishell even told an attendee, "This is my husband, by the way." (Awkward, am I right?)

The next morning, back at the office, Christine receives a bizarre notification on her phone.

"I just got a google alert from TMZ," she announces to the group. "Justin Hartley files for divorce." 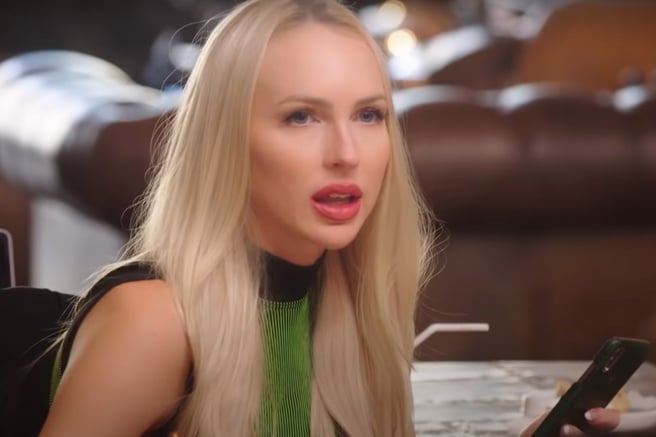 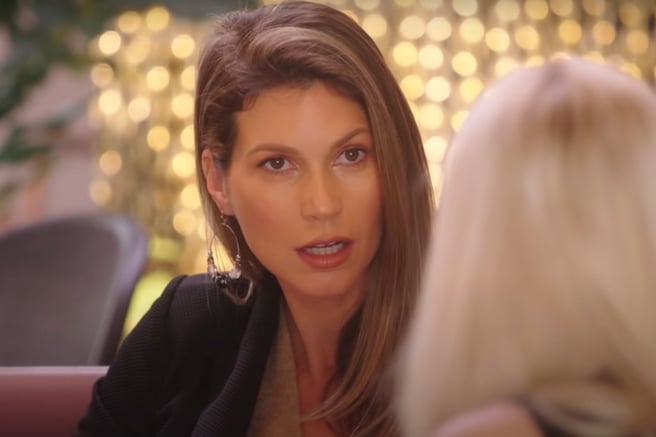 Cue shock, confusion and a lot of gasping.

After Chrishell fails to turn up to the office, Mary visits Chrishell at a hotel where she is staying while finding somewhere permanent to live.

"Sorry, I'm kind of still in shock with it all," Chrishell told Mary.

"I'm trying to keep it together but it's a lot all at once because everybody in the whole world knows the same time that I knew."

Mary then asked if the couple had had an argument prior to the sudden divorce.

"We had a fight that morning over the phone and I never saw him since, we didn't talk things through," Chrishell explained.

"Before we had a chance to figure anything out, he filed," she said.

"I found out because he texted me that we were filed. Forty-five minutes later, the world knew," she said, referring to the TMZ article. 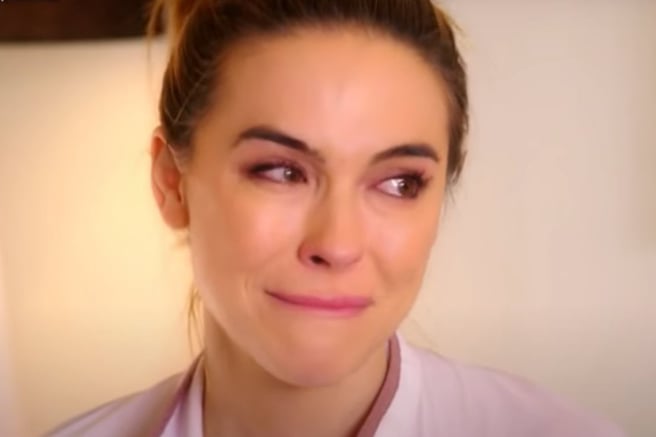 "It's hard, it takes a toll on your self-worth where you just feel the anger, 'How could you do it this way?' And then the sadness, like, 'I love him so much. This was my best friend. Who do I talk to now?' It's just such a roller coaster."

Chrishell and Justin first met in October 2013 after being set up by a mutual friend, before making their red carpet debut as a couple in January 2014.

"We met up at a concert and talked all night," Justin later told People of their first date.

"I drove her home and called the next day. We haven't been apart since. I knew right away [and] was like, 'Oh boy, here we go.'"

After announcing their engagement in July 2016, Chrishell and Justin were married at Malibu's Calamigos Ranch in October 2017.

"They don't make them any better than Justin, and I could not be more thrilled to officially be Mrs. Hartley! The wedding exceeded anything I could have ever imagined," Chrishell told People at the time.

Justin added: "At the risk of sounding cheesy, I look forward to sharing life experiences and growing old together. Someday, we can talk about all the things we did together 30 years ago!"

In November 2019, the couple posed for photos together at a Golden Globes event. 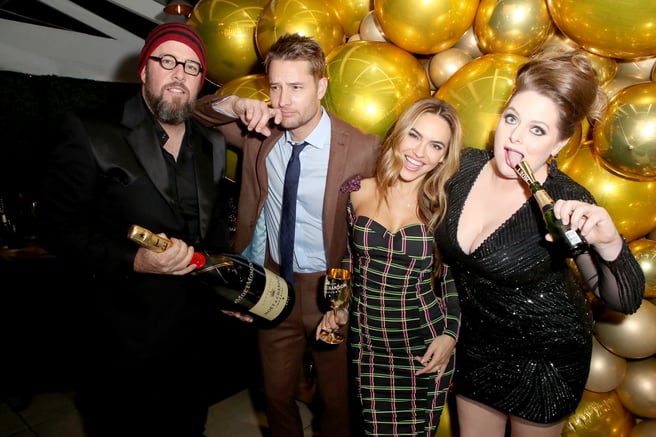 But just eight days later, Justin filed for divorce, citing "irreconcilable differences". According to reports, July 8, 2019 was bizarrely listed as the date of separation of the documents, despite the fact that the couple were seen publicly multiple times in the months following.

Although the pair haven't confirmed their relationship, Sofia shared a photo to her Instagram Stories last month of what appeared to be Justin holding a cigar with a Chicago Bears hat in the background.

How did the Selling Sunset cast respond to the news?

A month after the news of Chrishell and Justin's divorce first broke, Selling Sunset's Heather Rae Young spoke to Us Weekly about the surprise split, telling the publication that it was "hard to hear that".

As seen in season three of Selling Sunset, Chrishell was pretty upset about Heather's comments to the media.

"We all just thought maybe they were having communication problems for a while," Christine told Page Six.

"We heard that they were in therapy, so obviously there were some issues going on with them."

Later that month, however, Chrishell denied Christine's claims on Twitter, writing: "I just learned Christine is giving press 'information' about my divorce. Let me be VERY clear. She knows absolutely nothing about the situation and is obviously desperate to gain attention by doing so. Anything from her is either a complete lie or total conjecture on her part."

She added: "It’s so frustrating and unfortunate that someone would use someone’s personal painful situation to get press for themselves. I can’t say I am surprised, but please check the source. She has absolutely zero knowledge of the marriage we had."

I just learned Christine is giving press “information” about my divorce. Let me be VERY clear. She knows absolutely nothing about the situation and is obviously desperate to gain attention by doing so. Anything from her is either a complete lie or total conjecture on her part.

It’s so frustrating and unfortunate that someone would use someone’s personal painful situation to get press for themselves. I can’t say I am surprised, but please check the source. She has absolutely zero knowledge of the marriage we had.

When season three of Selling Sunset dropped on Netflix last month, Chrishell told Us Weekly that she was nervous about reliving the divorce.

"It’s an embarrassing, humiliating type of thing to go through without cameras and without people judging you, so I just hope people are gentle when they watch," she told the outlet.

"We’re real people. This was a traumatising time in my life and it’s going to be hard for me to watch it myself."

According to the publication, Justin had not watched the episodes of the reality show.

"He's irritated that she's airing their private information publicly and knows there is more to the story than is being told. His close friends and family know what really happened, as does Chrishell, so ultimately it's her choice of what is put out there," a source told Us Weekly.

Speaking to E! News, another anonymous source claimed that Chrishell "knew they were having problems in their marriage".﻿

﻿"They were fighting for months before Justin filed, but she didn't think he would actually end their marriage. They always brushed their problems under the rug."