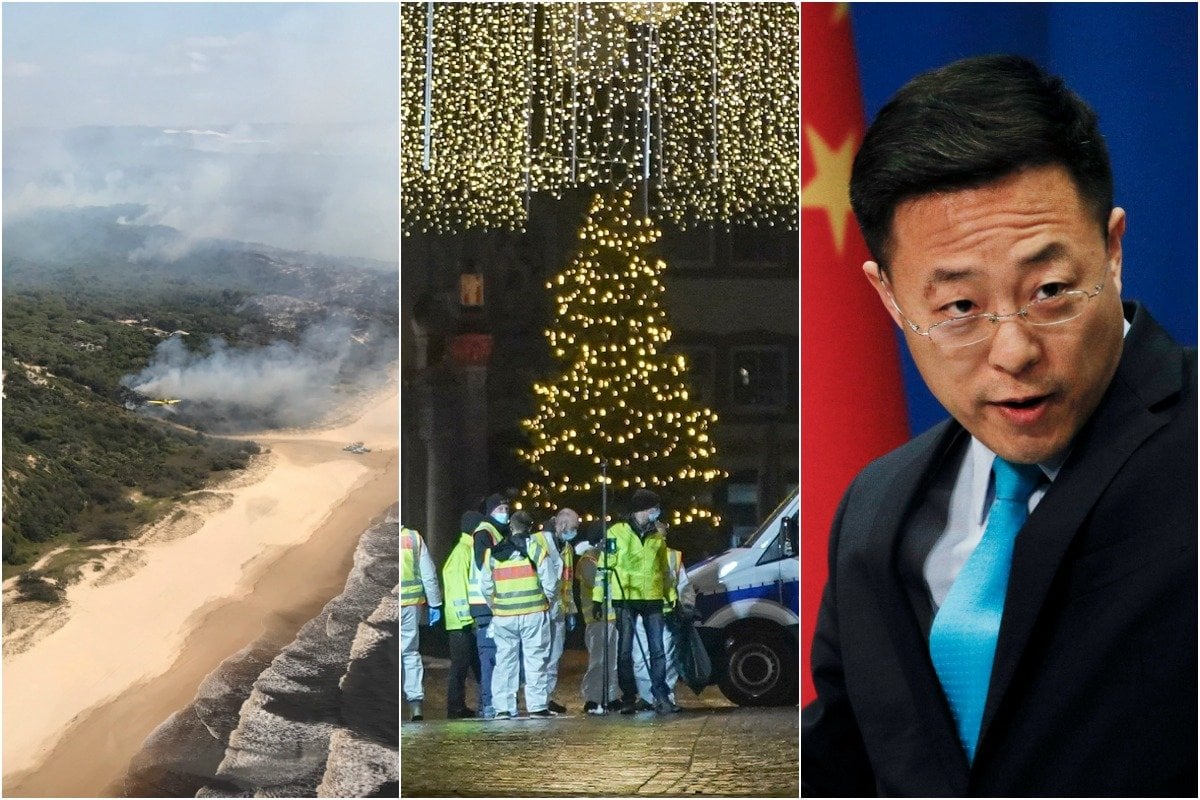 Overnight China's government mouthpiece The Global Times has published a cartoon of a bloodied kangaroo alongside a series of scathing tweets directed at Australia and Prime Minister Scott Morrison.

The new cartoon mocks Morrison for his outburst over the doctored image of an Australian soldier holding a bloodied knife to the throat of an Afghan child, which was mocked up by a local computer graphics designer.

"I am flabbergasted that he even organised a press conference to fume about it," the artist wrote.

#Opinion: A Chinese artist expressed his anger and condemnation against Australian troops’ war crimes with a cartoon. A Chinese diplomat put it on Twitter. They are practicing their freedom of speech. Ridiculously, such moves are intolerant to Australia.https://t.co/xpGYzwwddu

The faked images were published to Twitter by China's foreign ministry spokesperson Zhao Lijian earlier this week, and led to global outrage and criticism against Beijing.

The tensions between our two countries began when Australia demanded an investigation into the origins of coronavirus, spoke out about human rights abuses, and clamped down on foreign investment and interference.

It prompted hits on a wide range of Australian exports including coal, timber, grain and seafood with bans and tariffs.

Today Australia's agriculture and trade ministers are set to meet with the nation's peak wine body in a bid to lodge a defence against China's trade intervention.

What do you think of this? 👇

Politicians from around the world, who are part of a group working on China relations, have posted a video calling on people to buy Australian wine in a show of solidarity.

Adelaide prisoner on the run after making a rope out of clothes.

A prisoner has escaped from the Adelaide Remand Centre, making a rope using clothes before fleeing on an e-bike and then in a car.

33-year-old Jason Burdon escaped at 10:20am on Tuesday, with a 'clothing rope' seen hanging on the side of a building.

It's believed he fled down Phillip Street on a black bike, before stealing a Toyota RAV4 with registration S279BBL from the parking lot of the West Lakes Aquatic Centre.

Police are currently searching the CBD for Jason Burdon who escaped from the Adelaide Remand Centre this morning.https://t.co/lMy65NdPwm pic.twitter.com/PbzaO5JMin

Superintendent Craig Wall told reporters on Tuesday morning Burdon was of 'low risk' to the public, and was in custody for a breach of bail and 'some firearms offences at the lower end'.

Anyone who sees Burdon is urged to contact police immediately.

Four people including a nine-month-old baby have been killed and up to 15 injured when a speeding car ploughed into a pedestrian area in the western German city of Trier in what authorities say appeared to be a deliberate act.

Witnesses said people screamed in panic and some were thrown into the air by the car as it crashed through the shopping zone.

Crushed pram is pictured at scene of German car rampage that left four dead including a baby https://t.co/YJwKGrg4Om pic.twitter.com/aTD7jRD6f7

"We have arrested one person, one vehicle has been secured," police said, adding that a 51-year-old German suspect from the Trier area had been overpowered within minutes of the incident and was now being questioned.

Prosecutor Peter Fritzen later told a news conference the suspect had drunk a significant amount of alcohol and authorities were not working on the assumption that there was any terrorism motive to the incident. 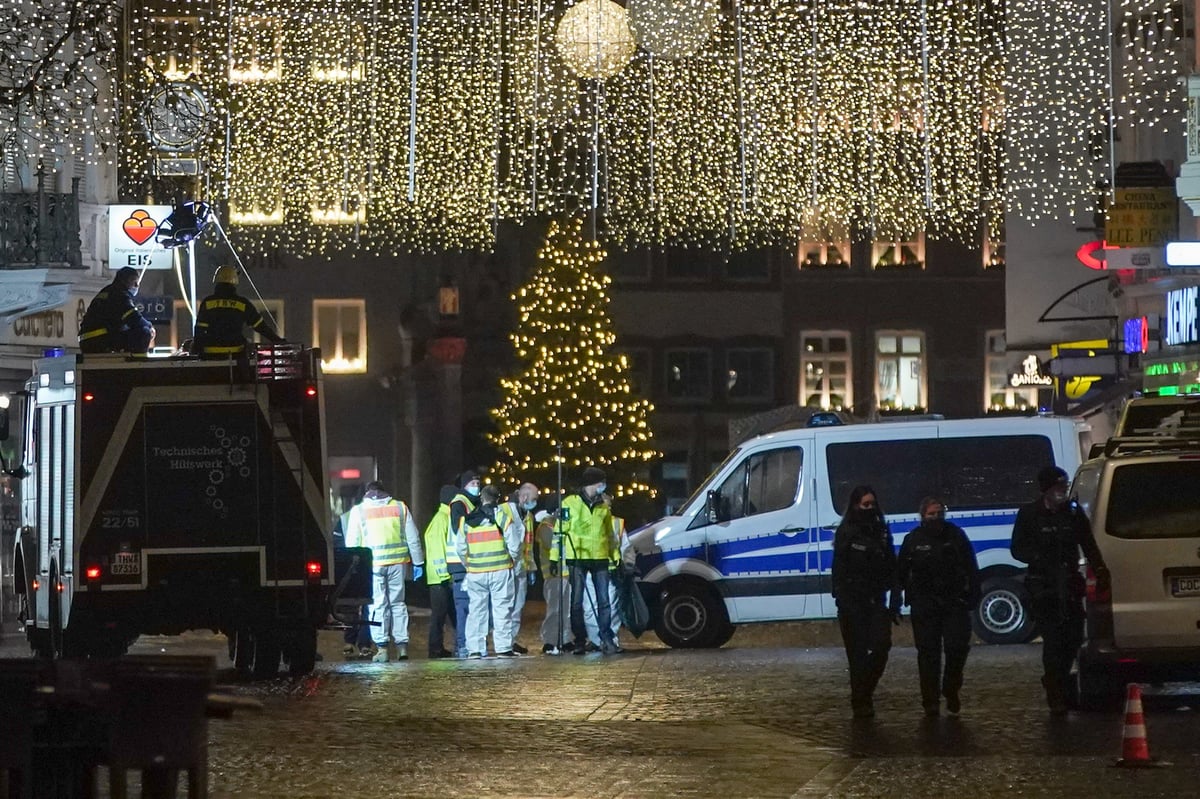 The long wait will soon be over for many West Australians separated from their loved ones, with the state set to reopen its borders to NSW and Victoria from December 8

Tuesday's announcement means travellers from those states will no longer be required to quarantine for 14 days, having endured almost nine months of restrictions.

WA has now removed border controls for all states and territories besides South Australia, which continues to grapple with a COVID-19 outbreak.

WA Premier Mark McGowan has announced the Western Australian border will open to NSW and Victoria from 12.01am on Tuesday Dec 8 under the following conditions: pic.twitter.com/ZlOn1RIdk5

Travellers from NSW and Victoria will still be required to undergo health screening and a temperature check at the airport, complete a G2G pass outlining recent travel and take a COVID test if necessary.

"I'd like to acknowledge and thank everyone for their patience and understanding," Premier Mark McGowan told reporters.

Victoria has already reached WA's criteria of 28 days without community transmission to qualify for eased border rules, while NSW has now gone 24 days without a locally-acquired infection.

Mercury drops across most of NSW as QLD heats up.

Most of NSW is set to enjoy significantly more comfortable weather after the state kicked off the 2020-21 summer with a scorcher.

After a steaming hot weekend and a reprieve of just one day, inland NSW on Tuesday bore the brunt of more sweltering weather.

The western town of Bourke hit 46C just before 1pm, while Walgett was 44C, with Dubbo sitting around 39C and Griffith 38C.

Australia just had its hottest spring on record based on the national mean temperature! 🌡

Meteorologists are tipping the mercury to begin rising again on the weekend.

RFS crews battled more than 60 bush and grass fires across NSW on Sunday, including in western Sydney's Northmead, and beat back more than 30 blazes on Tuesday. However none progressed to the "watch and act" level.

Queensland will instead see temperatures climbing over 40 degrees in some areas today, with the Bureau of Meteorology saying we could see records set for the hottest December day.

Authorities fear conditions will only enrage a bushfire burning Fraser Island which is dangerously close to Kingfisher Bay.

Queensland is in for another day of temperatures into the mid-forties, making an already difficult firefight on Fraser Island even harder. #9Today pic.twitter.com/Xb3bnKZ5JW

Trump lawyer says voter fraud denier should be "taken out and shot."

A member of Donald Trump's legal team has been widely condemned for declaring America's former cybersecurity chief Christopher Krebs should be "taken out and shot" for contradicting the president's claims about voter fraud.

Trump fired Krebs - a lifelong Republican - on November 17 from his role as head of the Cybersecurity and Infrastructure Security Agency after he publicly called the November 3 election the "most secure in American history."

“We’re taking a look at all our available opportunities.” -Christopher Krebs on potential legal action in response to death threats he has received pic.twitter.com/apwzNed4ns

The petition, filed on behalf of Trump, his campaign and US Vice President Mike Pence, also takes issue with voting events in city locations outside of polling stations, according to court filings.

The petition alleges 221,323 absentee ballots were improperly filed. Democratic Joe Biden edged out Trump in Wisconsin by about 20,000 votes.

Trump sues to disqualify over 221,000 ballots in Wisconsin in an attempt to overturn his loss https://t.co/hnsKhMMDXo

The Trump campaign and its supporters have filed lawsuits challenging Biden victories in Arizona, Pennsylvania, Georgia, Michigan and Nevada - so far without success.

On Monday, Wisconsin certified Biden as winner of the state, further dimming the Trump campaign's long-shot bid to overturn the results.

- European regulators may approve a coronavirus vaccine developed by drugmakers Pfizer and BioNTech within four weeks, the EU's drug agency said Tuesday, a time frame that could mean the shot is rolled out first in the United States and Britain.

- A Chinese robot probe launched to return lunar rocks to earth has landed on the moon, the government says.