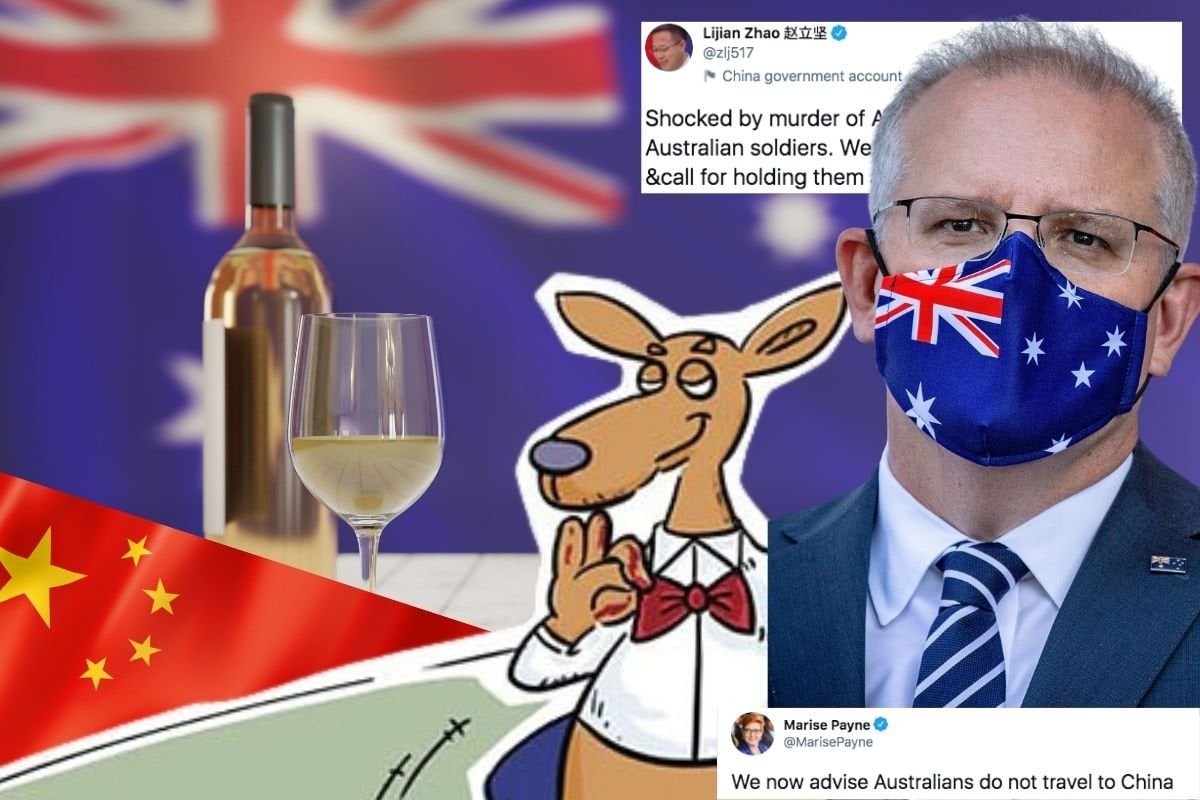 Tensions between Australia and China have gone from bad to worse this week, with Australians waking up Wednesday morning to find their most notable native animal next to a pool of blood.

It was only a cartoon, but the message was undeniable, with the media mouthpiece for the Chinese Communist party launching a series of attacks overnight directed at Australia.

Alongside the kangaroo standing beside a bloodied knife, another cartoon showed an Australian soldier standing on a dead body while holding up a sign that reads "human rights".

An accompanying opinion piece read, "A Chinese artist expressed his anger and condemnation against Australian troops’ war crimes in a neighbour (sic) country of China with a cartoon.

"A Chinese diplomat put it on Twitter to show his own opinion about these outrageous crimes. That’s all. Did they do anything wrong? They are practising (sic) their freedom of speech, something Australia claims to love and fight for. Ridiculously, such moves are intolerant to Australia’s current PM."

#Opinion: A Chinese artist expressed his anger and condemnation against Australian troops’ war crimes with a cartoon. A Chinese diplomat put it on Twitter. They are practicing their freedom of speech. Ridiculously, such moves are intolerant to Australia.https://t.co/xpGYzwwddu

The author was referring to a doctored photo shared on Monday morning by a Chinese foreign ministry spokesman, that appeared to show an Aussie digger slitting the throat of an Afghan child next to the caption "Don't be afraid, we are coming to bring you peace".

It was of course a reaction to the horrifying report released last month detailing a spate of alleged war crimes committed by Australian soldiers during the war in Afghanistan.

"Shocked by murder of Afghan civilians & prisoners by Australian soldiers. We strongly condemn such acts, & call for holding them accountable," wrote Chinese Foreign Ministry spokesperson Zhao Lijian, while linking to the fake image. 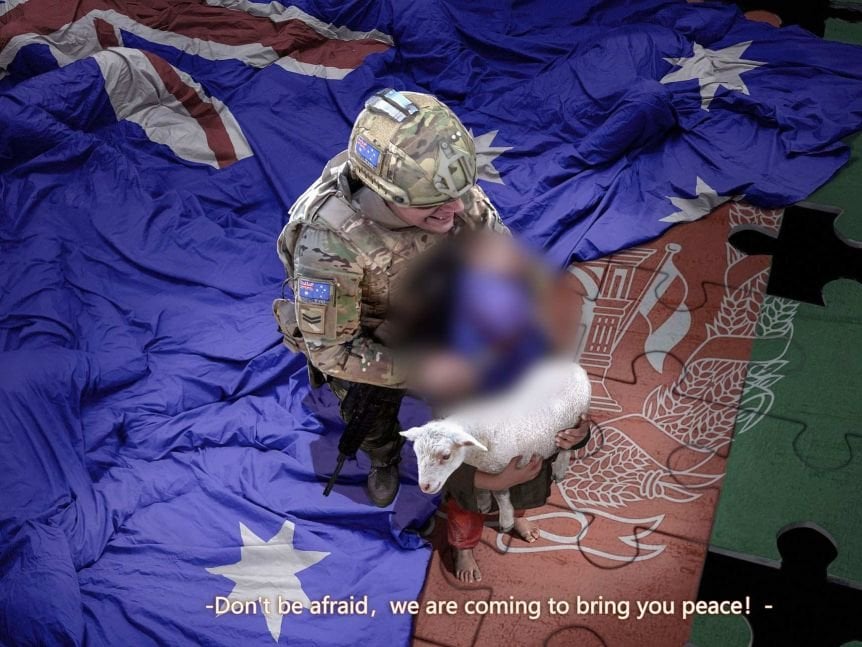 The tweet and photo has now been pinned to Lijian's feed, with China refusing to apologise. Image: Twitter.

Prime Minister Scott Morrison responded by demanding an apology from China for the "repugnant image" while demanding Lijian take it down.

"It is deeply offensive to every Australian," said Morrison. "It is utterly outrageous and it can’t be justified on any basis whatsoever. It diminishes them [China] in the world's eyes."

Australia has been increasingly outspoken against China's own alleged human rights breaches in recent years, criticising the government's "repressive measures" against minorities in the Xinjiang province and the eroding of freedoms in Hong Kong.

But this spat is much more complex than a fight over offensive images. It goes back years, and is affecting trade deals, Australians living abroad and could very well lead to the crumbling of our relationship with our biggest exporter.

While we've remained economically connected for many decades, Australia and China have remained separate politically and militarily despite their emergence as a major power in the Asia-Pacific region.

But that doesn't mean we haven't clashed over human rights and territory issues.

In 1989 after seeing footage of students being killed by Chinese military in Beijing, then Prime Minister Bob Hawke offered Chinese students asylum. In 2007 then Prime Minister John Howard received the Dalai Lama, who is living in exile from Tibet due to Chinese occupation. For doing so, Australia was accused of interfering in China's "internal affairs". 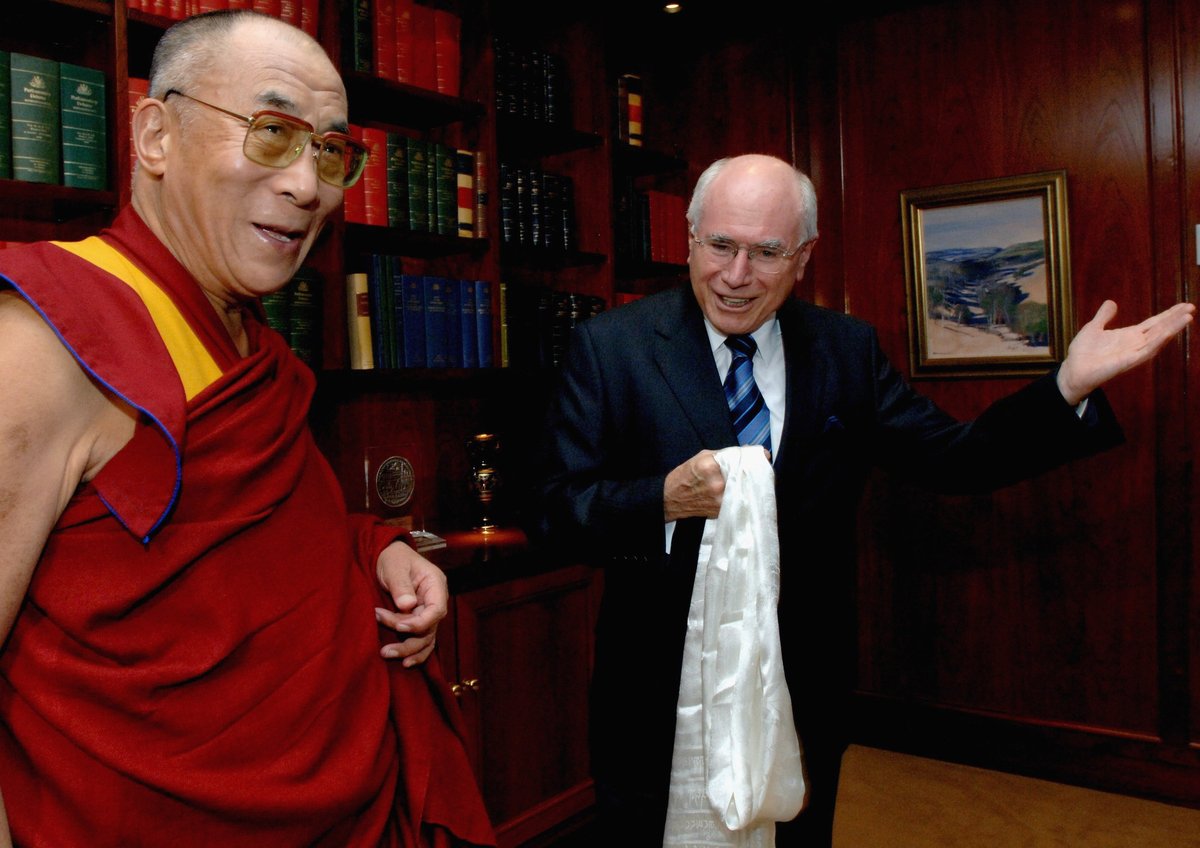 But the turning point came in 2017 when the Australian Security Intelligence Organisation (ASIO) warned of growing Chinese attempts to influence decision making in Canberra.

In 2018 Australia banned the Chinese tech company Huawei from being involved in its 5G network, for "national security reasons".

In 2019, Australia, along with 22 other nations signed a letter condoning the treatment of China's Uighurs Muslim population who have reportedly been forced into camps for what's being called 'retraining'.

Also in 2019, academic and blogger Yang Hengjun, a China-born Australian citizen, was detained and accused of "engaging in criminal activities endangering China's national security". Australia has been fighting to get him released ever since with Foreign Minister Marise Payne releasing a statement that read: "Dr Yang has had no access to legal representation and has been held in harsh conditions that have been detrimental to his physical and mental health [and] we have asked repeatedly that basic international standards of justice, procedural fairness and humane treatment apply."

What happened to our relationship in 2020?

An interview by Foreign Minister Marise Payne in April 2020 started a new phase of tensions between Australia and China.

Payne told ABC Insiders Australia would push for an independent inquiry into the outbreak of COVID-19, with Scott Morrison suggesting two days later that the World Health Organisation needed "weapons inspector powers" to investigate the cause.

Morrison calls for ban on wildlife markets and 'weapons inspector' powers for WHO https://t.co/80PXMzfMnP

China hit back, accusing Australia of "pandering" to America. In retaliation, Chinese ambassador Cheng Jingye threatened a consumer and tourism boycott of Australia and our goods.

"If the mood is going from bad to worse… Maybe the ordinary people will say 'why should we drink Australian wine? Eat Australian beef?'" Jingye told the Australian Financial Review.

In May, they did just that. Placing an 80 per cent tariff on Australian barley, following suit with tariffs on imports of Australian beef in July. Not long after that they announced an anti-dumping probe into Australian wine imports.

Also in July, China accused Australia of “gross interference” after Scott Morrison said he would extend Hong Kong visa holders in Australia because of a national security law imposed by China.

The Australian government updated its travel advice for China the very same month, warning that authorities have detained foreigners in the country and that Australians may be at risk of "arbitrary detention" if they travel there.

A prominent Australian journalist, Cheng Lei, has been detained in China as tensions between the two countries rise. She is a business anchor on CGTN, the international arm of China's state-owned broadcaster, according to Australian officials. https://t.co/8socNBcsGg

She is being held in Beijing under what is called "residential surveillance at a designated location," a form of detention in which investigators can imprison and question a suspect for up to six months while cutting them off from lawyers and the outside world — all before they have even been formally arrested.

Speaking to the ABC, Associate Professor Feng Chongyi, who was himself detained in China for a week in 2017, says of the experience: "The victim is usually held in solitary confinement, sealed off from the outside world for up to six months and subjected to continuous interrogations, sleep deprivation and other forms of torture."

According to human rights groups, dissidents, and China academics who have spoken to The Guardian, it’s possible the charges against Cheng hardly matter, and the most relevant factor is her Australian citizenship.

In September, Australia flew home the last two journalists working in China after a diplomatic standoff.

The coming home of Bill Birtles, the ABC's correspondent based in Beijing, and the Australian Financial Review's Mike Smith, based in Shanghai, means for the first time since the 1970s there are no accredited Australian media journalists based in China.

In November, China imposed tariffs of up to 212 per cent on Australian winemakers, effectively cutting the industry off from its most important export market.

China will impose taxes on Australian wine of up to 212%, intensifying trade tensions between the two countries https://t.co/oKp9CegBaC

Queensland timber, rock lobsters, coal and cotton were also slapped with trade sanctions in recent months, with reports from Chinese media suggesting Australian copper and sugar could be next.

In November, the Chinese embassy in Canberra issued a detailed list of 14 complaints against Australia accusing us of "poisoning bilateral relations". Beijing complained about everything from Canberra's involvement in Hong Kong affairs, its coronavirus inquiry, spying accusations and called for the government to reign in local media.

Morrison retorted by saying, "Australia’s values, democracy and sovereignty are not up for trade".

Which brings us to December, and the Chinese government this week targeting Australia's alleged war crimes in Afghanistan and the offending doctored photos, cartoon, and onslaught of negative press.

Some people in Australia clamoring to boycott Chinese products don't scare Chinese at all; The Australian market is a small one to China, but Australia has a large trade surplus with China. It seems many Australian politicians lack self-awareness: Editor-in-Chief Hu Xijin #HuSays pic.twitter.com/042z1EUWiE

France and New Zealand have joined Australia in criticising the Chinese government for its inflammatory tweet about Australian soldiers.

"New Zealand has registered directly with Chinese authorities our concern over the use of that image", said New Zealand Prime Minister Jacinda Ardern.

"It was an unfactual post, and of course that would concern us. So that is something we have raised directly in the manner that New Zealand does when we have such concerns."

New Zealand's prime minister, Jacinda Ardern, said her government has raised concerns with China about its using an image of an Australian soldier holding a knife to the throat of an Afghan child https://t.co/e13c1LPUaE pic.twitter.com/U7cEHgopHI

The French Foreign Ministry said it did not "consider the tweet in question to be worthy of the methods one would expect from the diplomacy of a country like China".

Both sides of Australian politics also remain unified, with Labor's Penny Wong saying the community was "united" in condemning the post, adding that a "careful" response was required by our government.

My statement in response to today's deeply offensive and inflammatory action by the Chinese Government: pic.twitter.com/fSpTvRV8gE

On the growing dispute over trade, a global alliance of parliamentarians have called on their compatriots to "stand against authoritarian bullying," launching a campaign to support Australian winemakers.

In a short video, released on Tuesday, MPs from the Inter-parliamentary Alliance of China (IPAC) called on people from around the world to buy Australian wine in a show of solidarity.

What do you think of this? 👇

Politicians from around the world, who are part of a group working on China relations, have posted a video calling on people to buy Australian wine in a show of solidarity.

So, what could this escalating dispute mean for Australia?

Mamamia's news podcast The Quicky interviewed former Prime Minister Kevin Rudd about what he believes is happening between the two countries.

Kevin Rudd says the worst-case scenario for Australia is that "we end up in conflict or war between the US and China".