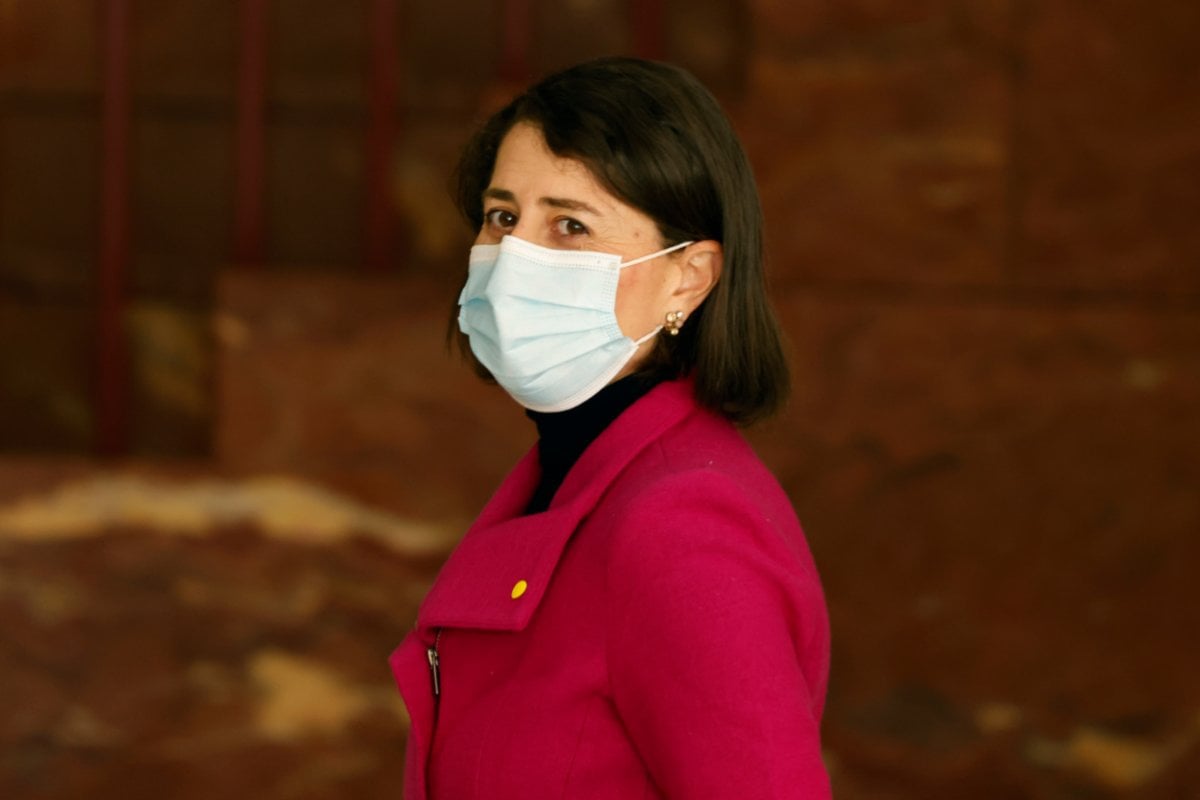 NSW Premier Gladys Berejiklian has declared that the COVID-19 cluster that currently exists in her state is now being regarded as a "national emergency."

A 'micro-plan' is being put into action in an effort to 'refocus our national vaccination strategy' with the NSW government focused on getting more doses of Pfizer and AstraZeneca into arms in southwest and western Sydney where the majority of cases are currently spreading.

To 8pm last night, NSW recorded 136 new cases, with 53 of those cases infectious in the community.

An 89-year-old man has become the sixth fatality linked to this current outbreak.

"There is no doubt that the numbers are not going in the direction we were hoping they would at this stage. It is fairly apparent that we will not be close to zero by next Friday," said Ms Berejiklian.

The Premier has confirmed that, "it's become apparent during the last few weeks that those who do have two doses of the vaccine are avoiding serous illness."

"The vaccines are working, that is excellent news," she told Friday's 11am press conference. "We need to get more of them into arms, even if it is a first jab, because we know that reduces transmission and can protect someone up to 30 per cent."

Chief Health Officer Dr Kerry Chant says she has recommended to the Federal Government that under 40s in Sydney's west - who have not been eligible for Pfizer, their age group's preferred vaccine - be prioritised.

"I have recommended to government that we urgently do mass vaccination of workers [in that area] to stem the transmission risk," she said.

"According to the federal vaccination rollout, by the end of October we will have much more of the population vaccinated, and we will be able to live much more freely beyond that point."

Details on vaccine rollout to be revealed, as TGA approves Pfizer for children.

Pfizer's COVID-19 vaccine has been approved for children aged 12 to 15 by Australia's medical regulator.

In January the TGA approved the Pfizer vaccine for those over 16, but were then asked to look into whether the vaccine was safer for even younger Australians.

The ABC reports though there has been approval for this younger age group, they won't be included in the rollout for some time.

Australians will get a clearer picture about vaccine availability over the rest of the year - a pointer to the easing of restrictions - after national cabinet meets on Friday.

Prime Minister Scott Morrison and state and territory leaders are expected to be briefed on the latest elements of the vaccine strategy including future supply and a massive expansion of the use of pharmacies to provide jabs.

Doctors are warning the continuing spread of the Delta variant of COVID-19, especially in Sydney and Melbourne, could demand tougher restrictions. However, senior federal government figures warn a further toughening could adversely affect the economy and the income that pays for health services needed to deal with the pandemic.

Deputy Prime Minister Barnaby Joyce said there was sense of frustration in the community over lockdowns.

"People want their liberty and their freedom of movement back," he told the ABC.

"And businesses will fall flat on their face and the government will run out of money - you have to balance this."

He was confident restrictions could be lifted at the end of the year when there were ample supplies of vaccines to cover those who wanted a jab, but there would need to be an "honest conversation" with Australians about living alongside COVID-19.

"People will get sick and tragically some people will die. The alternative is a continuous lockdown and our problem is we'll go broke."

Meanwhile, Mr Morrison has apologised for the vaccine rollout not meeting its targets after repeatedly refusing to say sorry. He insists some of the issues were out of his control.

#BREAKING: With half the country in lockdown, Prime Minister Scott Morrison says he is “sorry” Australia’s vaccine rollout has been slow. FULL STORY: https://t.co/EXLofH78UZ pic.twitter.com/y6ztzwk2UN

A Senate committee on Friday will hear from senior health and medical officials on the pandemic response.

Of particular interest will be evidence from the advisory body ATAGI, which continues to be cautious on the use of AstraZeneca for under-60s because of its links to extremely rare but potentially fatal blood clots.

41 workers at a Melbourne hospital have been temporarily stood down after a fellow staffer worked a shift while infectious with COVID-19.

The employee of Casey Hospital, a 229-bed facility in the city's outer southeast, returned a positive test on Tuesday.

Monash Health, the public health service that manages the hospital, confirmed the case on Thursday night.

The staffer worked one shift during their infectious period, forcing 41 hospital employees to be furloughed as they await test results.

A resident at Mecwacare Centre has tested negative after a COVID scare – while a COVID positive worker from Casey hospital has sent more than 40 staff into isolation. @IzaStaskowski #9News pic.twitter.com/7FzOsWFLUs

But the worker wore PPE during the shift, doesn't have a front-facing role, and is not thought to have had any interaction with patients.

Acting Chief Health Officer Ben Cowie said it was too early to say whether Victoria's lookdown would end as planned at 11:59pm on July 27, but he is confident authorities have a handle on the outbreak.

The number of sites of concern is heading towards 100 with the Seppeltsfield Winery in the Barossa Valley and a TAFE college in Adelaide among the latest to join the list.

The growing number of locations has meant thousands of people are now in home quarantine with requirements to have three virus tests as the state heads into the third full day of its week-long lockdown.

The so-called Modbury cluster stands at 14 confirmed infections after two more were reported on Thursday.

But Premier Steven Marshall says he remains very grateful the state moved into lockdown on Tuesday as waiting any longer could have been catastrophic.

"I'm still extraordinarily hopeful we can stop the spread of this disease over the seven-day lockdown period," he said.

The federal government is awaiting a decision by the UNESCO World Heritage Committee that could label the Great Barrier Reef an endangered natural site.

The committee, which is meeting both virtually and in the Chinese city of Fuzhou, is expected to vote on the draft decision on Friday night AEST.

Australian politicians have publicly campaigned against the reef being classified as being "in danger," fearing it would hurt the image of the economically important natural wonder, and suggested that the decision could be influenced by tensions with the Chinese government.

It's hard to care about other catastrophes when we're already fighting one. But COVID-19 will one day be behind us. Environmental ruin, however, is not something we can fix with a vaccine. #auspol https://t.co/8VMb6wmD4k

The director and the president of the 44th session, China's vice minister of education Tian Xuejun, has rejected speculation that the move was related to politics.

"Australia, as a member state of the World Heritage Committee, should... attach importance to the opinions of the advisory bodies and earnestly fulfil the duty of World Heritage protection instead of making groundless accusations against other states," he said on Sunday.

The draft decision says Australia's long-term plan for the reef "requires stronger and clearer commitments, in particular towards urgently countering the effects of climate change".

Australia may still be able to delay the vote to a later session in 2023 after its delegation submitted an amendment to the proposed text suggesting this, an idea that was backed by a majority of committee member countries.

On the eve of the Tokyo Games, organisers have fired the director of the opening ceremony over comments he made about the Holocaust as part of a comedy act in 1998.

The news is the latest in a series of embarrassments for Tokyo organisers that have sparked outrage at home and abroad, and comes just days after a well known musician was forced to step down as composer for the ceremony after old reports of his bullying and abusive behaviour surfaced.

The director of the Tokyo Olympics opening ceremony has been dismissed after local media reported on anti-Semitic comments he made about the Holocausthttps://t.co/hOqymx3wFY

These are just the latest in a series of setbacks, including the exit of Yoshiro Mori, the former head of the Tokyo 2020 organising committee, who resigned after making sexist remarks.

That was soon followed by the resignation of Tokyo Olympics creative head Hiroshi Sasaki after he made derogatory comments about a popular Japanese female entertainer.

The opening ceremony on Friday, which normally stands as a major showcase of the host nation, is set to be a subdued with Japanese media reporting that less than 950 people - including only around 15 global leaders - are set to attend.

Australians can watch the opening ceremony from 8:30pm AEST on Channel 7.

After setbacks and delays, the #Tokyo2020 Olympics are finally here! We're LIVE with everything you need to know ahead of tonight's Opening Ceremony 🙌🏻 @7Olympics pic.twitter.com/KH3UbDS4qn

Anger is continuing to mount in Britain over the decision by Australia and New Zealand to pull out of the 2021 rugby league World Cup, with the southern hemisphere giants being accused of "cowardly" and "selfish" behaviour.

Officials from the two countries say they made the call because of the worsening COVID-19 situation in the UK which made it "simply too unsafe to send teams and staff over".

“Without Australia and New Zealand, this is catastrophic”

The issue was even addressed in the British Parliament by Leader of the House of Commons Jacob Rees-Mogg, who mocked Australia for being "scared" to defend their crown.

Rugby Football League chairman Simon Johnson said: "The World Cup organisers have bent over backwards and turned double somersaults to meet every single requirement that was asked of them, by the Australians particularly.

"To have those assurances completely dismissed, I am angry about this. This is a selfish, parochial and cowardly decision which has been taken by the Australian and New Zealand leadership."

- A five-year-old boy in the United States has died from complications caused by the coronavirus, as the Delta variant continues to spread across the country.

- Russia managed to disconnect itself from the global internet during tests in June and July, the RBC daily reports.

- Authorities in Northern Ireland have been directed by the UK government to make abortion services available by the end of March 2022.

Reply
Upvote
The Brits had nearly 40,000 new Covid cases yesterday, but they can't understand why Australia and New Zealand don't want to send their rugby teams?
K
km 10 months ago

Reply
Upvote
I agree...mass vaccination should be offered in NSW. I'm in Tassie.....currently waiting for my Pfizer shot in 2 weeks but we have no covid here at the moment....we should be diverting as much Pfizer as we can to NSW. It's in the whole countries interest that we get that state vaccinated....nothing else is going to stop the NSW outbreak now...Genie is well and truly out of the bottle.
News
General
Opinion
True Crime
Politics
Sport
Explainer
Entertainment
Celebrity
Reality TV
Movies
TV
Books
Rogue
Royal
Lifestyle
Beauty
Fashion
Weddings
Home
Wellness
Health
Fitness
Travel
Food
Parents
Before The Bump
Pregnancy
Baby
Kids
Teens
School
Parent Opinion
Work & Money
Money
Finance
Career
Lady Startup
Relationships
Sex
Dating
Separation
Friendship
Family
Real Life
Couples