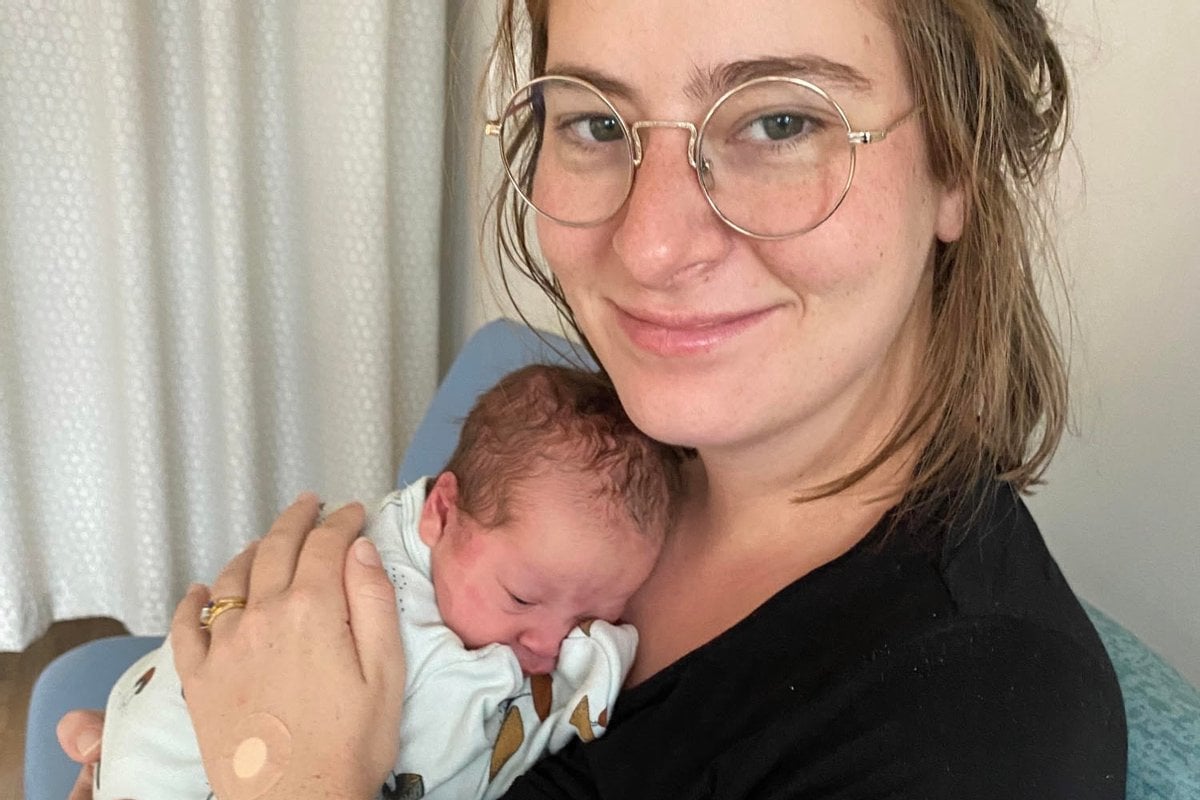 My experience of childbirth has been referred to as 'normal'.

At first I found this reductive and upsetting, and now I just have a dark chuckle and reassure myself that my male doctor, while amazing, has never experienced childbirth.

Watch: Your questions about childbirth, answered by mums and non-mums. Post continues below.

I’m a person who likes to be organised.

My husband and I attended birthing classes, I listened to podcasts about hypnobirthing, I meditated. I knew about different pain relief options, and while I preferred a natural birth, I was open to pain relief.

I wasn’t feeling afraid; I was feeling informed and optimistic.

My waters broke at about 8am on a Thursday. Yahoo! I was completely done being pregnant and excited to meet my baby.

Throughout the Thursday, I had uncomfortable contractions about every 15 minutes or so.

By about midnight, we were in hospital, and my contractions were becoming more and more intense.

I spent the early hours of the morning in the shower. I had my head on my husband’s shoulder, wailing, completely naked and in so much pain that I didn’t notice midwives coming in and out.

These contractions were 'only' coming about every three to five minutes, so midwives were telling me that labour hadn’t even started yet. I still wasn’t asking for pain relief.

Then, at about 5am, the contractions stopped altogether. This was, on one hand, a relief that meant my husband and I could get at least some sleep.

Mostly though, I felt like Theon in Game of Thrones, when he was led out of the torture chamber, and then back in again. I felt afraid, because I knew what was coming for me again.

I was induced at about 1pm. Before I knew it, I was back in the shower wailing.

And then things kicked up another gear.

My pain was about a nine or 10 before I asked for gas. It was only set to 30 per cent because I didn’t want to feel nauseous.

My husband told me later that the worst part for him was when a contraction started before the other one fully finished, and I moaned, 'Not again'. He said that he saw 'me', rather than just the screaming. I told him, 'I was in there the whole time.'

Listen to This Glorious Mess, a weekly look at parenting as it truly is: confusing, exhausting, inspiring, funny, and full of surprises. Post continues below.

I have a chronic condition called vaginismus, which means pain in the vagina. So when the doctors wanted to check to see how dilated my cervix was, they said, 'We’re going to turn the gas from 30 per cent to 100 per cent for this.'

For me, this was the worst part of the entire experience. The gas meant that everything turned black with stars. Meanwhile, I was screaming and writhing in pain.

Luckily, they said I was ready to start pushing.

The pushing was a little easier than the previous contractions, probably because I had something to do. However, I was still pushing for another whole hour, with my beautiful girl inching her way out at a snail’s pace.

Finally, at 9am on the Friday, 37 hours after my water broke, she was born.

They tell you that when you hold your baby in your arms, 'You forget everything!' That wasn’t my experience.

I was still quite preoccupied with everything that was going on at the business end. This is referred to as the final stage of labour, or, as I like to call it: damage control.

After the doctor had finished doing the stitches, I asked him what degree of tearing, he said 'only second'. Phew. I knew I was looking at three weeks of recovery and no implication of bowel or bladder function.

We had our golden three hours, where our new bubby attached beautifully for breastfeeding, and we had our first of many snuggles.

My husband and I were entranced by our baby, and delirious from the whole ordeal.

By the time I’d had a shower to get off all the blood and guts and laid down in our room, it was 2am.

Technically I was only in labour for seven hours, but I consider I was in labour from when my water broke at 8am on the Thursday to when I was able to lay down at 2am on the Saturday. 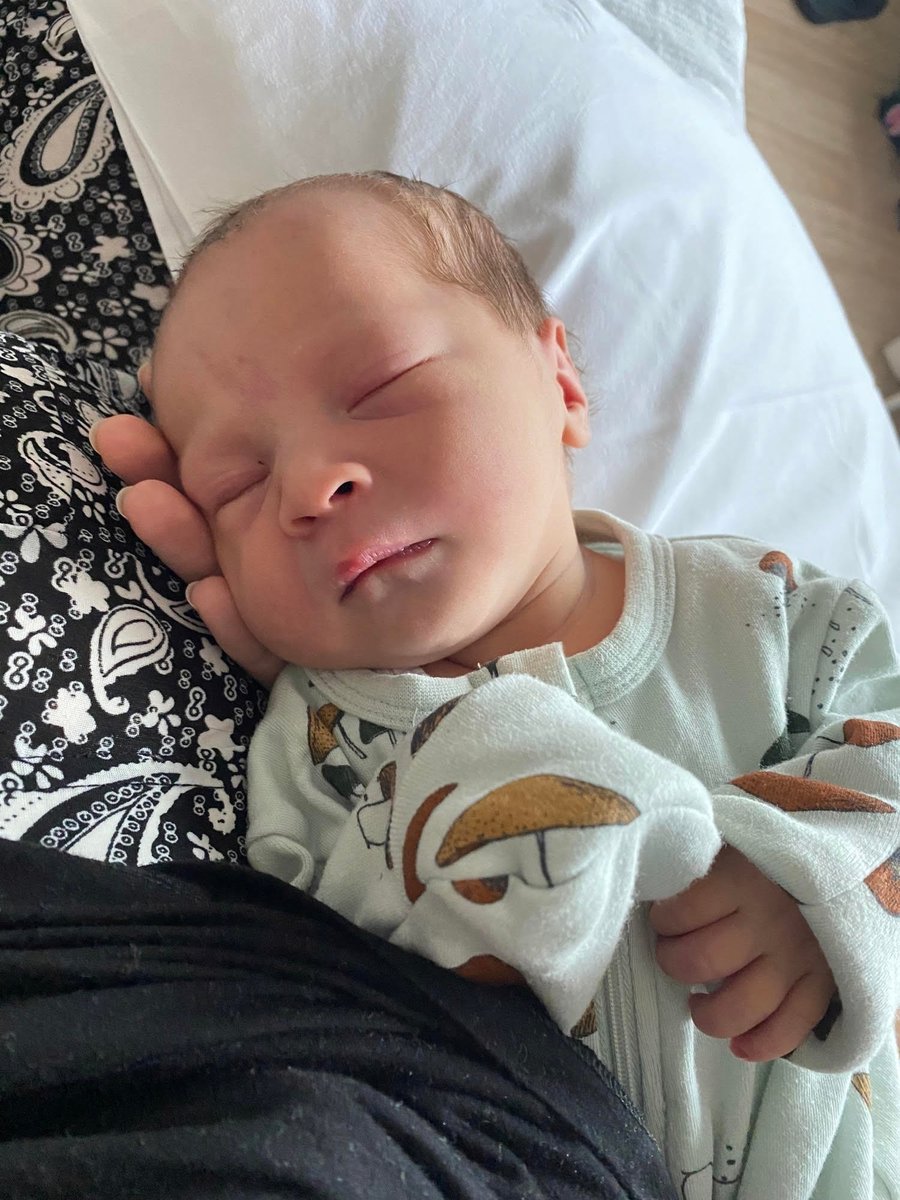 Image: Supplied. Over the next few weeks, I had symptoms similar to PTSD.

When I saw the shirt I wore at the hospital, I burst into tears.

My husband did some drilling, and the sound of it sent me into a complete panic attack.

My bedroom was dimly lit, like the delivery room, and once I was half-asleep and thought I was back there, so I woke up screaming.

All this, after a so-called 'normal vaginal delivery' (or 'NVD' as it was written in my discharge summary). Luckily, for me, these symptoms faded with time.

I’m grateful that my experience was uncomplicated and safe. However, that doesn’t mean it was 'easy' as compared to other births. And that’s where we hit the issue, I think.

There’s often a toxicity that comes when women compare themselves to each other. It’s not helpful for me to think, 'Oh I didn’t have x, y, z, therefore I didn’t suffer' or 'I don’t have the right to suffer like other people'.

Regardless of the circumstances, childbirth will be one of the most significant, and probably most painful, experiences of a person's life. It’s a Big Day.

It was definitely a Big Day in my life. In fact, it was the Biggest Day. So I think the best I can do is treat myself with a little kindness, and offer that kindness to other women who have also experienced it. Solidarity, sisters.

Reply
Upvote
2 upvotes
"Regardless of the circumstances, childbirth will be one of the most significant, and probably most painful, experiences of a person's life. It’s a Big Day. " Exactly.
Childbirth and pregnancy are traumatic experiences and it should be normalised that people who go through it are going to probably experience some form of PTSD. People should not be expected to just suck it up because it happens every day or because someone else had a different experience. It's a huge thing to go through!
C
cat 23 days ago

Reply
Upvote
@laura__palmer I honestly don't know where the idea has come from that birth isn't traumatic- is it a recent "wellness" thing? Until quite recently giving birth was the highest risk thing most women ever did. It's amazing that childbirth is so safe now, but its like people decided that if it's safe it must be pleasant and painless too.
I often wonder if the new idea that birth can be "beautiful" (planned/ calm/ natural/ spiritual/ intentional etc) actually leads to women being even more traumatised when it turns out to be chaotic and painful.
D
daijobou 22 days ago

Reply
Upvote
@cat I think it also stems from history, that giving birth was seen as a woman’s main job. If something went wrong, often times the woman was made to feel that it was because she did something wrong or her body was not “good enough” so of course woman were very reluctant to speak up about bad experiences. Things are getting better but I definitely think the “wellness” trend is dangerous when it starts going back to those older attitudes.
L
laura__palmer 22 days ago

Reply
Upvote
@cat "I often wonder if the new idea that birth can be "beautiful" (planned/ calm/ natural/ spiritual/ intentional etc) actually leads to women being even more traumatised when it turns out to be chaotic and painful. " absolutely 100% I think. It's not spiritual, nothing goes to plan, you are not calm and it's terrifying. It's nothing like you have in your head. Sometimes your baby almost dies. That is terribly traumatic.  And if everything turns out okay, then you have this baby and that isn't anything like you imagined either. The best thing anyone ever said to me about having a baby while I was pregnant was sometimes you will hate your baby and that is okay.  And this is from one of the best mums I know. At the time I thought it was a bit much but when you've been rocking this thing for hours trying to get it to go to sleep at 3am and it's been countless nights of this, you hate that baby.
L
laura__palmer 22 days ago

Reply
Upvote
@daijobou Yep, women are made to feel less than if they opt for a caesarian  or if they have to use drugs and it's also "Well, women have been doing it for centuries, so suck it up"
<
<deleted> 24 days ago