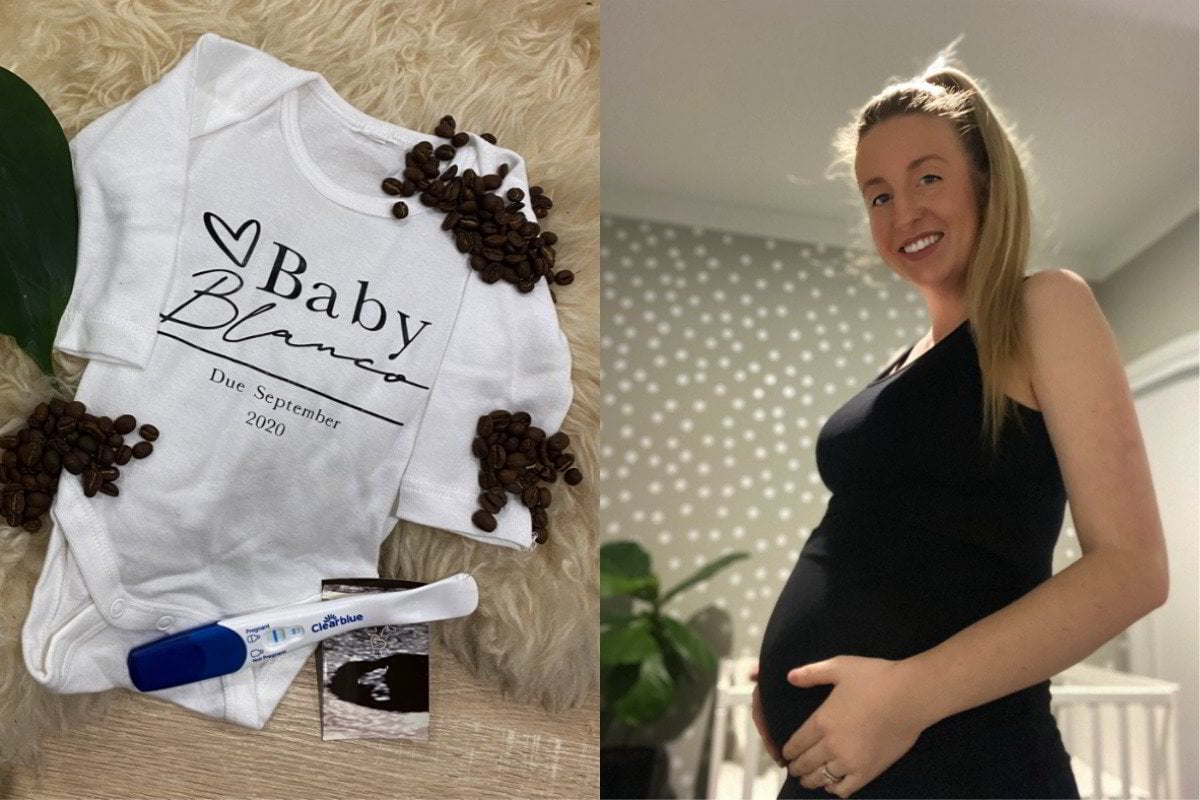 This year began like a dream for my little family. The news that we had conceived our first child came in early January. Both of us were in great jobs, we had big plans, and the excitement felt like it was growing by the day.

Soon to be a family of three, we were elated and couldn’t wait to share the news with our close-knit circle of family and friends.

Flash forward to today and you wouldn’t know that we were that same excited couple. Fear and an overall feeling of disempowerment have replaced the initial unwavering excitement.

As I watched the experience of the pandemic globally, the hope I had held onto as the Australian COVID-19 case numbers dropped was ‘at least we're in Australia’. For me, this translated to:

At least my partner will be with me in the hospital.

At least I won’t have to wear a mask while I labour.

At least my family will be able to meet my new little baby when the time comes.

Unfortunately, from my lonely Melbourne lounge room, it feels like those hopes are being crushed today.

The pandemic first reared its ugly head in March when my job was impacted. Once travelling around Melbourne and interstate weekly, I was now housebound and unemployed. Like many people, so much of my personal identity was attached to my work.

For it to change so quickly was a big blow, particularly under the circumstances. I had faced pretty rough first trimester nausea, so my partner and I felt like maybe this break was what we needed for the baby and for myself. Financially, we could make it work, and so home I stayed. Every day.

At the same time, the first phase of Melbourne restrictions had begun. My doctor no longer wanted me to attend clinic visits, instead pushing for telehealth consults only. I would contact him about my severe morning sickness, rashes, pain, headaches, but still… no in-person consultations were to be scheduled. I understood it was both for my safety as well as his, but I couldn’t help suddenly feeling alone in my health care. An invisible enemy had taken precedence over our experience.

Listen: Pregnancy in the time of Coronavirus. Post continues below.

It was also now clear that the plans I had for my first pregnancy would no longer be an option. At the very least, not in the way I envisaged.

No pregnancy Pilates classes. No pre-natal classes at the hospital. No calm-birthing course.

I would have to try and seek online alternatives, and just deal with the fact that things didn’t ‘look’ the same. No teachers would be there to correct my posture. No midwife would be able to help my partner master his massage technique. Best we could hope for was an audio book, some online articles and maybe at best, a Zoom call.

As my little bump began to grow, so did a seed of sadness in my mind.

I had watched so many family members, friends and colleagues as their bellies grew, and I had felt such joy for all of them. I loved watching the excitement and anticipation expand as their bellies did, and I couldn’t help but feel a little selfish ‘loss’ that I would miss out on that same day-to-day connection. I would have to reserve that role for my household only. A household that was, at this stage, just my husband and I.

It’s funny now, thinking back to people complaining about their bellies being touched by aunts and strangers. By my second trimester, I was yearning to share my growing belly with anyone who would take joy in it the way I always had in others’.

My husband held his own hopes for our first pregnancy. He was looking forward to being there for every class, doctor’s appointment and ultrasound scan. He had even come with me to the first couple of blood tests (despite his needle-phobia) because as far as he was concerned, we would be doing this whole thing together.

As classes were cancelled, he tried to stay positive. “We will just do it online”.

Then obstetrics appointments were made for mothers only. Then we were told he wouldn’t be allowed into the ultrasounds. It was so sad to walk into the ultrasound clinic, leaving him outside, passing car after car with doting father-to-be sitting in the front seat waiting for their pregnant wives. Waiting to know if everything was okay, and keeping any questions that they may have had inside as though their concerns were somehow not the priority anymore.

He didn’t complain, but I couldn’t help but see the sadness in his face grow with every blow. He was losing his pregnancy experience just as much as I was.

Melbourne had done well in lockdown one, though, and the restrictions slowly started to lift along with my spirits. I could see a friend now and then, and I could have our family around in small groups. It was exactly what we needed, and I was really feeling like things had changed.

My mum and in-laws were even talking about throwing a baby shower! Surely by August we would be able to have 20 people come together, right? Well, it now seems now.

With the re-instatement of stage three restrictions in Melbourne, I came to realise that not only will my baby shower not happen, but I will also now miss sharing the third trimester with my friends and family.

Some friends will have missed my pregnancy entirely, having not seen me since I first told them I had a little ball of cells growing back in week six.

I won’t get to have my best friend’s hand on my belly to feel baby kick.

I won’t get to sit with my grandmother while she watches her great grand-baby grow.

This was all so hard to process, but at least I was protecting my little baby while I complied with this new ‘normal’. I would focus on staying happy and healthy. At least we are in Australia, right? My partner will be with me in the hospital. I won’t have to labour in a mask. My family will get to meet baby on arrival home…

Now, those final few hopes are slipping away, and I can’t help but feel like it’s the final straw for me.

As of the new rules announced today, my husband will be required to leave the room two hours after the baby is born.

Visiting hours will be for one person, for two hours, per day. Meaning my husband will be with me only for ‘visiting hours’, as though he is just an observer of his wife and child rather than a parent himself.

And then, there is the ongoing Melbourne lockdown. It seems there will be no visitors at home either. How old will my baby be when it meets its grandparents, great grandparents, aunts and uncles? Time will tell.

I have heard many people describe our varying experiences as individuals in this pandemic as being ‘different ships in the same ocean’. It absolutely does not escape me that we are so very lucky to be experiencing our first healthy pregnancy, and I am so thankful for everything that we have. It just feels that in the last few days, my boat seems to have sprung a few leaks.

But I can’t reschedule this baby, and I will need to be the best that I can be in preparation for their arrival in this world. This weekend, I will try to focus on finding ways to empower myself in my pregnancy while in what feels like crippling isolation.

I will find ways to mentally overcome the fact that I won’t see smiling faces in the birthing suite.

I will try to prepare myself that my partner may be separated from me on our first few nights with the baby.

I will try to process the concept that the baby may be months old before I have any in-person support outside of my little family of three.

And, like so many other people in their own boats during the pandemic, I will try to deal with this feeling of loss. We may have lost the first pregnancy experience we had hoped for, but I will be here today trying to focus on the little joys and our blessings wherever I can.

Reply
Upvote
Look, I’m sorry but there seems to be a whole lot of negativity here. Every ‘meltdown’ is affecting your baby. I’m in a horrible position vis a vis my health at the moment and there isn’t going to be a happy ending like you can expect. You are so lucky to be bringing a baby into your life and that of your husband. Regardless of the circumstances, rejoice in it. Be happy. It sounds as though you have a pretty charmed life. Think of the future when the madness is over and this is just a bad dream. Your disappointment will have disappeared and you will have a child to love and enjoy for years. This is just a blip.
You might find this hard to believe but for millennia, women have sailed through pregnancy without Pilates and massage classes for dads. Childbirth is a natural function and if you listen to your body, you’ll know what to do do and what help to ask for from your husband. Just relax and count your multiple blessings. A positive, happy mum to be is the very best thing you can give your baby.
News
General
Opinion
True Crime
Politics
Sport
Explainer
Entertainment
Celebrity
Reality TV
Movies
TV
Books
Rogue
Royal
Lifestyle
Beauty
Fashion
Weddings
Home
Wellness
Health
Fitness
Travel
Food
Family
Before The Bump
Pregnancy
Baby
Kids
Teens
School
Parent Opinion
Work & Money
Money
Finance
Career
Lady Startup
Relationships
Sex
Dating
Separation
Friendship
Family
Real Life
Couples