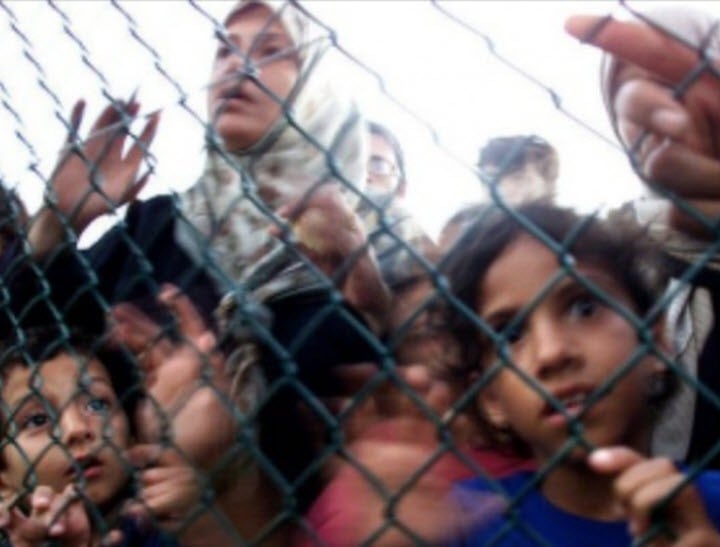 This teenager’s wisdom and empathy will give you hope.

My oldest daughter and I were in the car together when we heard Julian Burnside talking on the radio about children so desperate that they had attempted suicide while in asylum detention. It was heartbreaking. I discovered today that my daughter wrote to the Prime Minister about it.

This is what she wrote. – Dr Tim Senior.

“To the Hon Tony Abbott MP,

On the 31st of March, 2015, I was listening to Radio National on my way down to school with my dad. It was a Tuesday, and a normal day. On the radio, a lawyer called Julian Burnside was talking, and he caught my attention. He was talking about the effects of offshore detention on children, my age and younger.

Read more: “Believing that you have gone was extremely difficult.” Asylum seekers mark 1 year since the bashing death of their friend.

Right now, 133 children are being held in immigration detention facilities within Australia, and 107 are held in detention on Nauru. He was telling a story of a young girl and her family. This girl was 11 years old. To put this into perspective, she is two years younger than me.  She had come over from Iran to seek asylum in Australia, and had then been sent to one of our detention centres, with the rest of her family, for 18 months. She was horribly mistreated here, abused by guards and under-nourished. They came to live in Australia, because she was in such a bad way that she needed psychiatric help. Here, the 11-year-old child hung herself with a bedsheet. They took her to hospital. At hospital, no one was allowed to visit her because ‘visiting hours on Nauru were from 9am-5pm’.

If an 11-year-old child is trying to KILL herself, because of what us Australians are doing, what does that mean? Because of Australians, because we lock people away who just need safety and help, because of our law, children are trying to kill themselves.

There is another girl right now, five years old, who is in Darwin. She has been told that she has to go back to Nauru, back to the place where she was treated how no child should be treated. Back to her nightmare. This child is also suicidal. This FIVE-YEAR-OLD CHILD is trying to kill herself. And why? Because of what our law has done to her.

Julian Burnside went on to remind us that seeking asylum is not illegal. Nor are these people criminals. You and your government claim that by keeping the ‘criminals’ in offshore detention that you are protecting Australia. Do you think that a five-year-old child, who wants to kill herself, is likely to be more of a danger to Australia or to herself? Do you think that sending her back to Nauru, to ‘protect Australia’, is worth her life?

I can’t get my head around the fact that while I live my life, while I get driven to school by my dad, while I enjoy normal Tuesdays, children younger than me are killing themselves. And there’s nothing I can do. But you can. You have the power to save people’s lives. You can do more than I can.

It is your government that is doing this to human beings. It is your law that makes children kill themselves. It is our narrowed and stubborn minds that mean innocent people die. It is Australia that needs to save lives.

Get your act together Australia.

I look forward to hearing your response.

Imogen, some numbers for your consideration, 31 August 2013 there was 1743 children in detention, 445 of them spread between Christmas and cocos keeling islands. 31 March 2015 there was 227 children in detention, 103 of them on Nauru. That's a reduction of 1516 children. Yes there are still children in detention, this response to a reporters question at a press conference regarding the recommendations made in the Moss report into Nauru explains why. Peter Dutton:" Yeah, of course… look, of course it does. And that's why, frankly, we're so passionate about making sure these boats don't start up again, because 1200 people did die at sea when these boats were coming and do I want to see anyone in detention? Of course I don't. But I also can't allow a situation again where we see a flotilla of boats coming and we end up with the sorts of things that we're talking about today. That's what I don't want to return to. And we've been able to reduce the number significantly.

By definition, as I say, we are getting to much harder cases. So for example I've got some families I'm looking at the moment that I would want to release the kids into community, but I have an adverse security assessment against the father or there is an allegation of a serious nature against the father, maybe sexual assault. And I have offered for mum to take the children out of detention and go into the community and we would provide support there and allow visitation back to the father. In some of those cases that's been rejected and that's fine. Family units want to stay together or they believe that there might be greater leverage for dad to get out into the community if the family is still with them. That's an issue for individual families.

But I am working through now the toughest of cases, having got from that 2000 in detention of children now down to about 120, and I do want to reduce it further, but I have the toughest cases left and we're going through those on a daily basis. And what I don't want - sincerely, what I don't want - is for those vacant rooms where the kids were that we've now moved out into the community to be backfilled by new boat arrivals. And that's why we're absolutely determined to make sure that Operation Sovereign Borders continues its success, and there are pressures on the Government every day.

People smugglers in Indonesia and Sri Lanka and across South East Asia are trying to fill boats every day. And we are staring down that threat every day, but it continues. And that's the strong stance that this Government has taken and it will not change."

The Government has accepted all 19 recommendations from the Moss report and is seeking to achieve those changes over a two month period. Its also worth considering the situation these children have come from and what they may have seen before hanging all mental issues solely on detention.

Perhaps I am missing something when it comes to those held in the detention camps in Nauru.

Are they people who have applied for VISAs and been approved, paid for legal transport to get here and have correct documentation on who they are etc when they arrive?
If they are, then by all means how we are treating them is horrible and we should be ashamed of somebody who would let this go on.

However, if they are not, then why should we help them now they are threatening suicide? They were fine to risk their lives when getting onto rickety boats and traveling over to Australia to live here (under the hope of not being caught), without any documentation and no approval to be here.

Seeking asylum is not illegal - as long as you go about it legally.
Lets not forget that criminal activity is what brought these people here.

You are missing something. It is that some of these people flee their countries because they would be killed otherwise, they don't have time to wait for their visa to be processed, they would be dead by the time it was approved.

Your missing the point that these people aren't the criminals, they give everything they have to the people smugglers who promise to get them into Australia, and who are they to know better. They don't have access to media the same way we do. They are scared for them self and their family, they are fed lies by the people smugglers (who are the criminals here) because they want their money

Your are missing the point that these people get on leaky boats because they have 2 options left. Get on the boat and risk death or be murdered.

You are missing the point that this letter specifically speaks of CHILDREN, who are completely innocent of any wrong doing.

You are right that seeking asylum is legal but wrong in thinking that these people are criminals for getting here by boat. Many had no choice. Criminal activity did bring them here, but the people in Nauru are not the criminals.

You are missing a map of the world. Yeah no access to media that's a good 1, they just randomly bypassed nearby safe options and kept on going until they bumped into Indonesia with amazingly, the correct change for the ferry.

Shannon, I think you will find that under international law, seeking asylum by any means possible is legal, and what is not legal in fact is the Australian Government detaining people in the manner in which they are in places like Nauru. This isn’t something forced upon us by the UN, but a commitment we made voluntarily.

Further, the principle of non-refoulement means that Australia is prohibited from returning people to any territory where they have a well-founded fear of persecution for reasons of race, religion, nationality, political opinion, or membership of a particular social group. Australia is also prohibited from returning people to where they face a real risk of being arbitrarily deprived of life, subjected to the death penalty, tortured, or subjected to cruel, inhuman or degrading treatment or punishment.

Australia’s duty arises by virtue of our ratification of a range of treaties, including the 1951 Refugee Convention, its 1967 Protocol, the 1966 International Covenant on Civil and Political Rights (ICCPR) and the 1984 Convention against Torture and Otherwise Cruel, Inhuman or Degrading Treatment or Punishment. This obligation extends to any place where Australian officials exert control over asylum seekers – whether within Australian territory, in another country, or on the high seas.

Asylum seekers who arrive in Australia by boat are neither engaging in illegal activity, nor are they immigrants.
The UN Refugee Convention (to which Australia is a signatory) recognises that refugees have a lawful right to enter a country for the purposes of seeking asylum, regardless of how they arrive or whether they hold valid travel or identity documents. The Convention stipulates that what would usually be considered as illegal actions (e.g. entering a country without a visa) should not be treated as illegal if a person is seeking asylum. This means that it is incorrect to refer to asylum seekers who arrive without authorisation as “illegal”, as they in fact have a lawful right to enter Australia to seek asylum.
In line with our obligations under the Convention, Australian law also permits unauthorised entry into Australia for the purposes of seeking asylum. Asylum seekers do not break any Australian laws simply by arriving on boats or without authorisation.