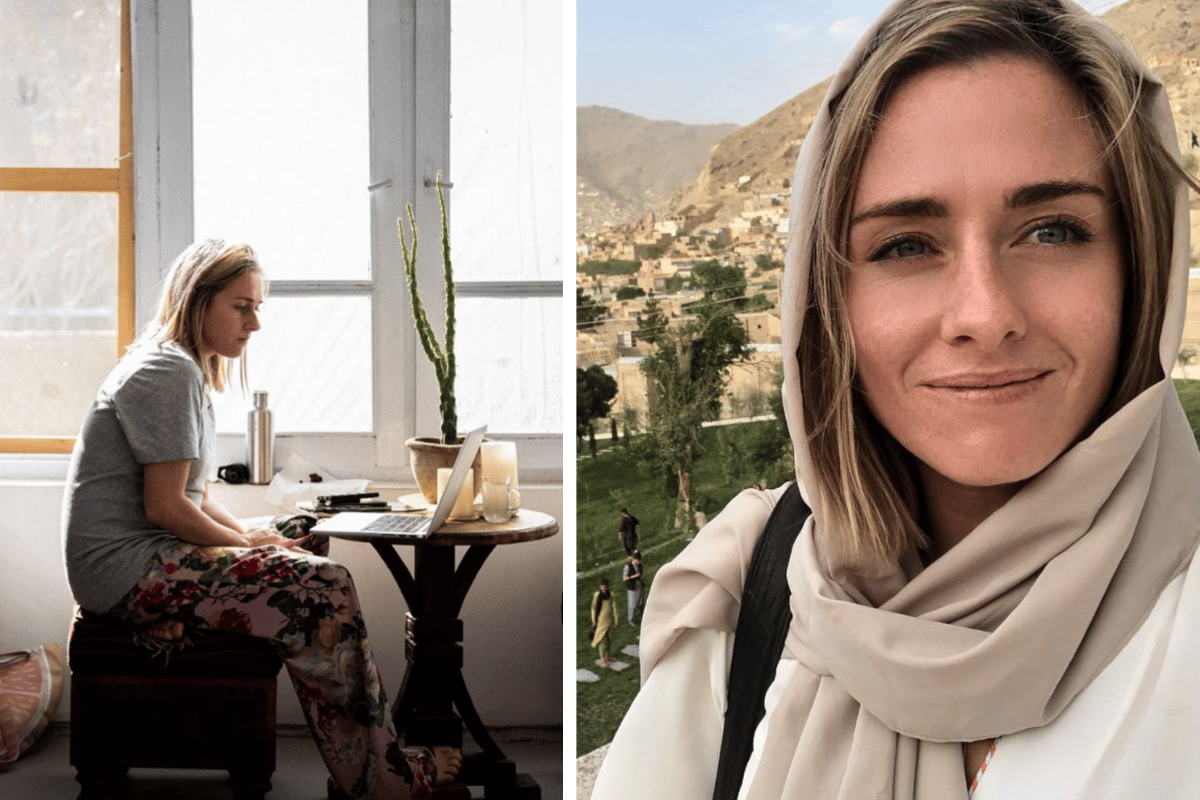 Charlotte Bellis is a New Zealander and independent journalist who up until recently was working as an Afghanistan correspondent for Al Jazeera, the first English-language news channel to be headquartered in the Middle East.

But everything has since changed now that Charlotte is pregnant.

She is stranded in Afghanistan's capital city Kabul, with New Zealand's Government preventing her from returning to her home country.

Here's everything we know about the situation.

At 25 weeks pregnant, Charlotte wrote a column for The New Zealand Herald this week, detailing the fear she has with her current predicament.

Late last year, the Taliban held their inaugural press conference, addressing both the citizens in Afghanistan and the world watching on.

Charlotte was one journalist in attendance at the conference, asking the militant group: "What will you do to protect the rights of women and girls?"

A week after that press conference, Charlotte conceived a little girl.

"For years I had been told by doctors I would never have children. I threw myself into my career and made peace with it. Now during the fall of Kabul, a miracle," Charlotte wrote.

And then a wave of concern came over Charlotte.

"I was deployed to Afghanistan by Al Jazeera from my base in Doha, Qatar. When I returned to Doha in September, I realised that I was a few days late. It is illegal to be pregnant and unmarried in Qatar."

Charlotte's partner of two years, Jim Huylebroek, a Belgian photographer for The New York Times, was in Kabul and couldn't get out of the country. Charlotte couldn't get back into New Zealand. So she went to a local pharmacy in Qatar with a cover story about buying a pregnancy test for a married friend and returned to her apartment.

After taking the test, she realised she was pregnant.

So in September, she apprehensively booked an appointment with a gynaecologist in a bid to weigh up her options.

"I asked the doctor, hypothetically, if I was pregnant, would you tell the police. She said 'I won't, but I can't treat you and I can only say you need to get married or get out of the country as soon as possible'. I resigned from Al Jazeera in November, losing my income, health insurance and residency. I can't tell you the number of questions I got. I clearly wasn't very convincing in my 'just time for a change' answers," Charlotte wrote in The New Zealand Herald.

Then came relief for Charlotte and Jim: New Zealand would be open to citizens at the end of February, which would work perfectly with Charlotte's May 2022 due date.

Charlotte Bellis, who worked for Al Jazeera, said it was "brutally ironic" that she had once questioned the Taliban about their treatment of women and girls and was now asking the same question of her own government. https://t.co/WYKlRIqhL6

So Charlotte had to organise a meeting with senior Taliban contacts, telling them she was unwed, pregnant and needed a place to stay.

The Taliban said to Charlotte: "Yes, yes we respect you both and you are foreigners, that is up to you. We're happy for you, you can come and you won't have a problem. Just tell people you're married and if it escalates, call us. Don't worry. Everything will be fine."

And as Charlotte said in her column: "When the Taliban offers you - a pregnant, unmarried woman - safe haven, you know your situation is messed up."

Even though Charlotte now had refuge in Afghanistan, she still was desperate to get home to Christchurch.

So when the New Zealand February border reopening was delayed, Charlotte was crushed.

"There was no way home other than to apply for emergency spots. We had read the horror stories of pregnant women being rejected, seen the statistics of just 5 per cent of Kiwis being approved if they are unable to stay in their current location and only 14 per cent being approved if there is a risk to their health and safety. We talked to Grounded Kiwis and lawyer Tudor Clee, who agreed to take our case pro bono and had a track record of helping pregnant Kiwis stuck abroad," Charlotte noted.

So she decided to send 59 documents to New Zealand authorities in Afghanistan asking for help. This included letters from Kiwi obstetricians, medical experts, ultrasounds, bank statements, COVID vaccination and booster certificates and more.

But the application was rejected.

Listen to The Quicky: "They will never go to school again": Afghan women need our help. Post continues after audio.

"I had tried to prepare for this day. I thought I would cry, but I was in shock. I had done everything they asked. What was the threshold? What more can I do? I thought about sending them a story I did in October at a maternity hospital in Kabul where they had no power so were delivering by cell phone light at night. They couldn't do caesarean deliveries and the only medicine they had were tabs of paracetamol wrapped in crinkled newspaper."

She continued: "The UN wrote recently that they expect an extra 50,000 women will die during childbirth in Afghanistan by 2025 because of the state of maternity care. Here, getting pregnant can be a death sentence."

In response to Charlotte's predicament, the joint head of New Zealand's Managed Isolation and Quarantine system, Chris Bunny, told The Herald that Charlotte's emergency application didn't fit a requirement that she travel within 14 days.

New Zealand's COVID-19 Response Minister Chris Hipkins told The Herald his office had asked officials to check whether they followed the proper procedures in Charlotte's case, "which appeared at first sight to warrant further explanation."

New Zealand has managed to keep the spread of the virus to a minimum during the pandemic and has reported just 52 virus deaths among its population of 5 million. But the country's requirement that even returning citizens spend 10 days isolating in quarantine hotels run by the military has led to a backlog of thousands of people wanting to return home vying for spots.

Charlotte's story is not uncommon. Cases of citizens stranded overseas in dire circumstances have caused controversy for New Zealand's Government.

"They rejected us, like they have so many thousands of other desperate New Zealanders. I am writing this because I believe in transparency and I believe that we as a country are better than this," Charlotte said. "Jacinda Ardern is better than this. I am writing this to find solutions so that New Zealanders both at home and abroad are safe and protected. Our story is unique in context, but not in desperation."

As for now, Charlotte is weighing up her options.

NZ website Stuff reported on Sunday that Charlotte had been offered asylum by an unnamed country.

But regardless, Charlotte hopes that no one else has to experience something like this again.

"We are so much better than this. I thought back to August, and how brutally ironic it was, that I had asked the Taliban what they would do to ensure the rights of women and girls. And now, I am asking the same question of my own Government."