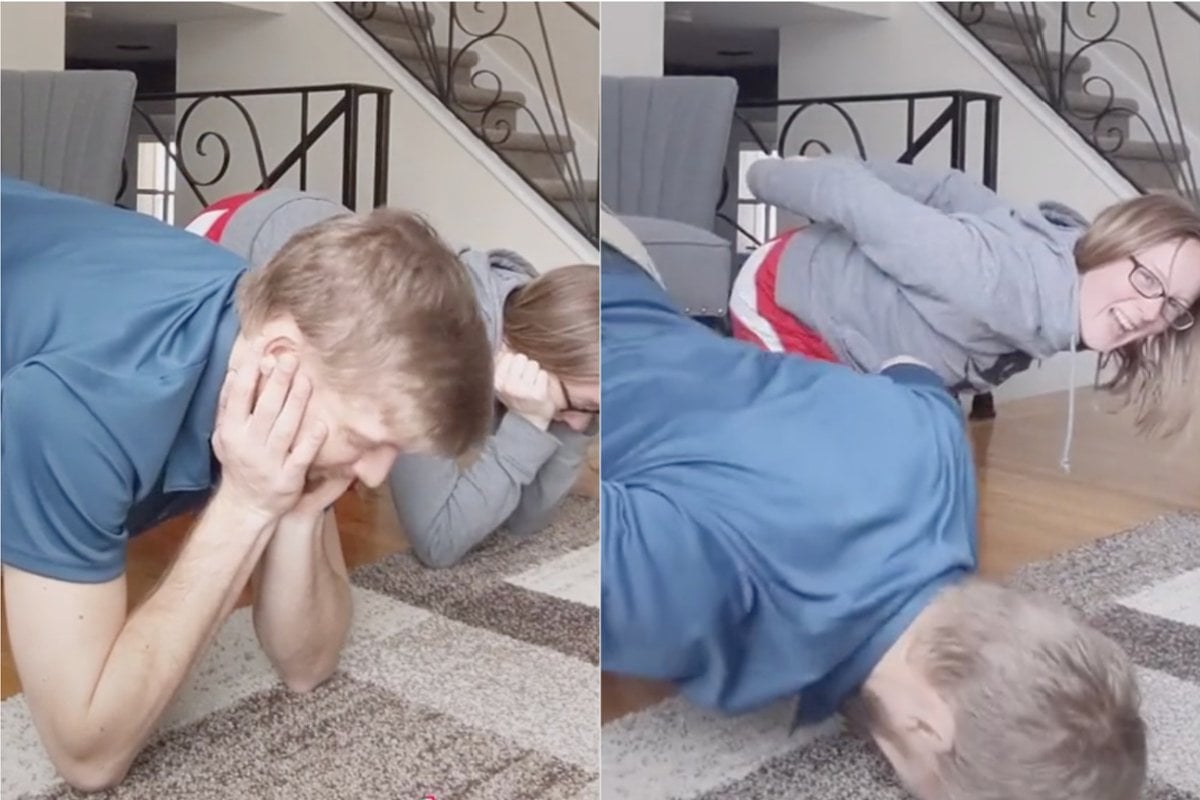 Deep inside the ceaseless vortex of the TikTok 'For You Page' - the thief of too many of my days - there is a video that presents a challenge that can only be described as profound.

Amid the dances and the dishes and the D'Amelios, this challenge is a... gift.

You see, it shows the difference between men and women in a single move, by demonstrating the simple *fact* that men cannot lift their elbows off the ground when on their knees, whilst women can, and... how did it take so long for humankind to make such a consequential discovery?

The challenge requires the man and woman to get on all-fours, with their elbows on the ground and their chin resting on their hands.

Then, you both swiftly move your arms to behind your back. In many instances - according to the bank of reliable evidence as provided by random people on TikTok - the woman can keep her balance whilst the man's face plummets to the ground.

A user by the name of @mgfletch uploaded a short video with the accompanying explanation: "Apparently men have a different centre of gravity that prevents them from being able to do this."

And there's many, many more.

For the record, two of my male friends tried this and they couldn't stay up either. It provided precisely four minutes of laughter for us.

According to a peer-reviewed study published by the Theoretical Biology and Medical Modelling, it is true that men and women have different centres of gravity, thereby impacting their athletic agility.

"It is well know that on average women commonly have an 8 - 15 per cent lower longitudinal center of gravity (COG or center of mass relative to height) than men. This anatomic differentiation has been speculated to have arisen evolutionarily during the development of bipedal locomotion as a means to provide better stability in females during pregnancy and infant carriage. The differences also impact inherent athletic agility and are a major contributing factor to techniques used in sporting events. In gymnastics, women excel in uneven bar competitions while men usually compete on parallel bar configurations."

Tl;DR: Women typically have a lower centre of gravity than men.

It's not the first time a challenge testing this difference has been brought up.

Many of you will remember the 'Chair challenge,' which went viral in December 2019 as humans discovered that men cannot lift up a chair at a 90 degree angle. At the time, scientist Jeremy Johnson said this was also due to gravity, explaining: "the centre of mass for most girls is lower to the hips, while the centre of mass in boys is much higher.

So, yes. Find a man in your life and ask him to test his centre of gravity by placing his elbows and knees on the ground and swinging back his arms.

Probably place a pillow in front of him too - for safety reasons.