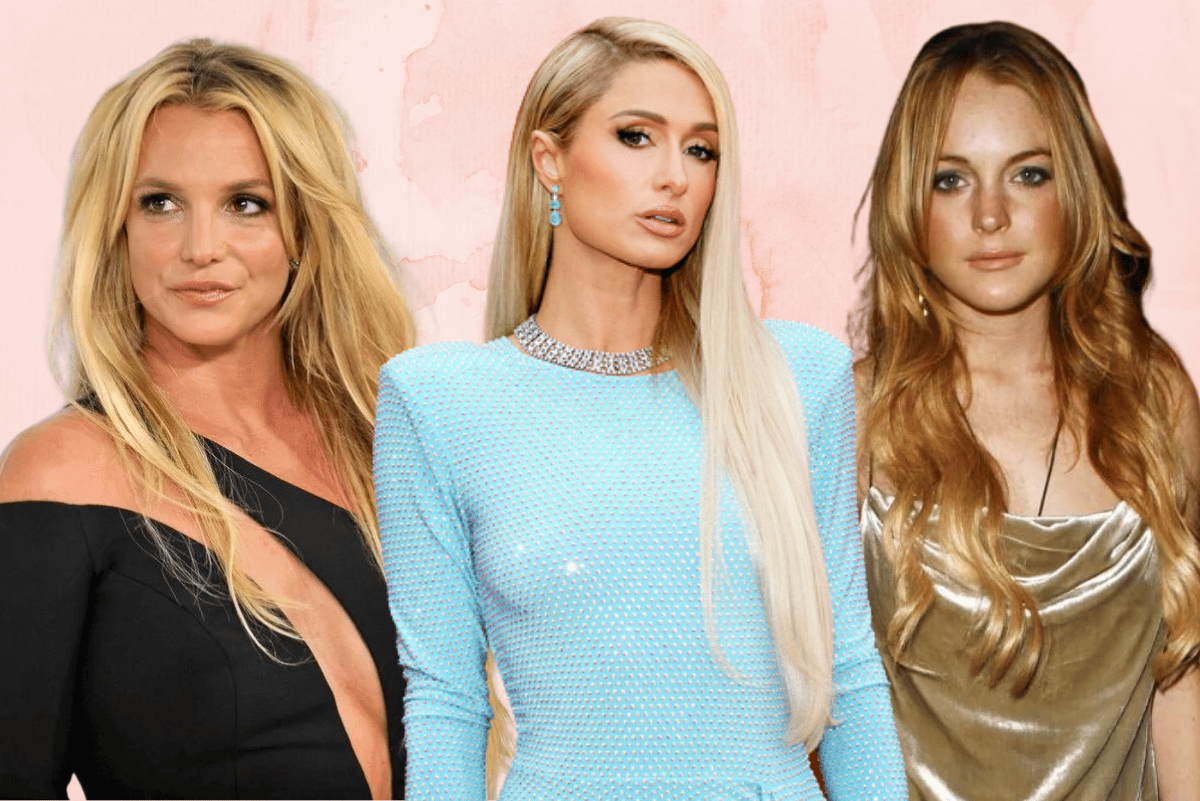 There's a dark moment in entertainment history that saw the world's fascination with celebrity mix with a new thirst for tabloid media, and the result was a perfect storm of scrutiny around a particular group of women.

Each of these women had cemented themselves in popular culture in a particular way that invited waves of love and ownership in equal measure.

Lindsay Lohan launched to fame via 1998's hit Disney film The Parent Trap, before going on to star in Freaky Friday, Confessions of a Teenage Drama Queen, and the critical and box office hit that was Mean Girls.

Her growing list of credits made her somewhat of a golden goose for the movie studios churning out the projects with her name attached, her presence a surefire way to draw in a loyal audience.

Paris Hilton was anointed as "New York's leading 'It' Girl" in 2001 thanks to an issue of Vanity Fair and then found international fame in the reality TV series The Simple Life. Her debut book, Confessions of an Heiress was a New York Times Best Seller, and her debut album Paris scaled the charts and produced a successful single in Stars Are Blind.

Britney Spears was one of the world's best-selling music artists, selling more than 150 million records worldwide, with her first two studio albums, ...Baby One More Time and Oops!... I Did It Again both breaking records as they topped the charts and her stadium tours selling out.

However, for a period of time in the early 2000s, these three women were known less for their feats of accomplishment in the realms of movies and music and more so for their late-night antics that were captured frame by frame by the hordes of lurking paparazzi that followed their every move.

What came next was a sea of tabloid headlines that fulled a backlash against them.

In many cases, news headlines around incidents, such as dangerous driving that led to court cases and arresters, were warranted.

But the coverage around them went deeper than just a serious of reports and soon correlations between drunken images of them in clubs and their diminishing work projects were made.

For more than a decade the names Lindsay Lohan, Paris Hilton, and Britney Spears were marred with derision and scandal.

If you opened a magazine or switched on a late-night talk show you'd be faced with a slew of jokes about Lindsay's arrests and dropped movie projects, Paris' jail time and remarks about her being a bimbo, or ruthless coverage of Britney's life; featuring jabs about umbrellas, head shaving, and even her young children.

But in the last few years, the court of public opinion surrounding these women has begun to shift, thanks in some part to a backlash against tabloid culture and an increased interest in what really happened behind the scenes to these famous women. All whose talents were bankrolling the teams of people around them.

It was also thanks in part to documentaries such as This Is Paris and Framing Britney Spears, which redefined their personal traumas, highlighted the media's often brutal treatment of them, and made the public think twice about how they had been labelled as 'train wrecks' who deserved their fate.

Yet in the last few months, the names of these three famous women have all made headlines for a different reason and their arcs of public 'redemption' appear to have come full circle.

In June of this year, Britney Spears married her longtime partner Sam Asghari at her home in Los Angeles.

Then, just this week, Lindsay Lohan confirmed she had married financier Bader Shammas, although she has yet to share images from the wedding or the exact date it took place.

While wedding news from these three women should be met with nothing more than a chorus of congratulations, the commentary surrounding them has highlighted a very uncomfortable truth.

These three women, whose success was marred by legal plights and scandals that saw them previously labelled as nothing more than 'washed-up party girls' were suddenly seen as fully 'redeemed' in the public eye because they were married.

It was a hard truth to swallow for a number of reasons.

Namely, because it proved the fact that, no matter how progressive we believe we've become, nothing cements the idea of a woman's success quite like confirmation she's married.

But all three of these women's stories are far more complicated than that.

Britney Spears is newly free from the confines of her conservatorship but arguably when it comes to her legal issues, career, and mental health there are still many more chapters left for her to navigate.

Lindsay Lohan has been vocal about returning to the prominent film position that slipped out of her grasp when she become uninsurable and began losing roles, yet when news of her wedding broke the overwhelming consensus was that she'd 'finally come good'.

Paris Hilton is almost a different story entirely, because despite claims that she was set to be a one-hit-wonder during the beginning of her career, she's since morphed into a successful business owner and DJ with an empire to her name.

Yet the extensive coverage of her wedding was clocked with a sigh of relief that she'd 'finally' made it down the aisle just as she turned 40. As if the magnitude of her past accomplishments paled in comparison to slipping on that white dress.

And while it's not up to the public to decide if or when these women are even in need of redemption, the reaction to their collective wedding news proves we're still only understood in chasing one particular kind of fairytale ending.

Reply
Upvote
Furthermore, look at the work Paris has done and continues to do around legislative change to protect teens in institutions.
M
mamamia-user-482898552 a month ago

Paris Hilton ....she's since morphed into a successful business owner and DJ with an empire to her name.