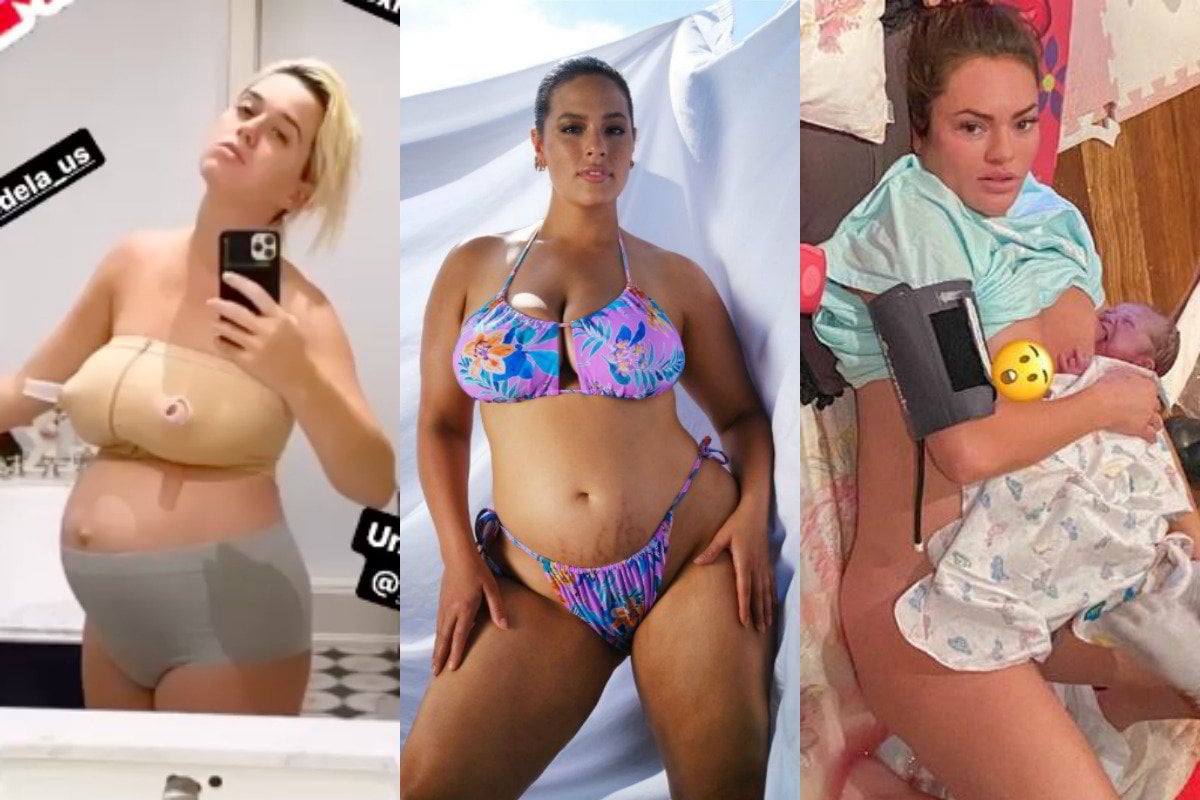 It was always a three-part deal.

Back when I worked in celebrity magazines, the contracts we'd negotiate with expectant famous women were always the same. Three shoot-interview packages: The Announcement; The Baby; The Post-Baby Body.

Not every actress, model or presenter wanted to do the body bit, of course, but a fair number would. It upped the money, obviously, and some would laugh about th﻿e motivation it would give them. The tighter the time-frame for shoot number three, the better we liked it.

﻿And after all, the star's agent would always negotiate full pic approval, including retouching instructions.

Tight dresses were acceptable. Active wear was okay. Bikini was the holy grail.

"We" still want to see what babies do to bodies but now celebrities mostly post about their pregnancies, babies, and "bounce-backs" on their own platforms. On their own terms and their own timeframes.

And "celebrity" means something different now, we're as likely to be interested in how a personal trainer from Broadbeach looks three weeks after giving birth as we are someone we've seen at the Oscars.

But the fascination is still there.

﻿And in some ways, thank God.

If you doubt the power of the celebrity body shot to infiltrate the culture, I invite you to consider this pic, here: 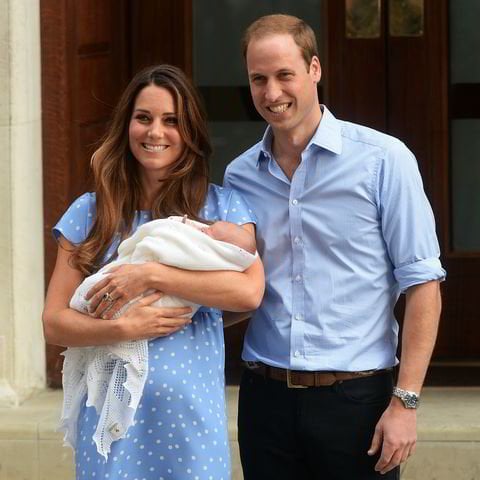 Image: Getty.
It was taken seven years ago. And the moment Duchess Kate posed with baby Prince George seemed like the first time many people (women without kids, let's be honest) had considered that a woman still looks pregnant in the belly area after the baby has moved out.

Kate had given birth hours before this picture was taken, had a hair and make-up crew in to prepare her for the snapping hordes on the hospital steps, but still, that pale blue dress enlightened many to the fact that they had been tricked by the "BODY AFTER BABY" covers they'd seen their entire lives.

Those covers would tell you that discipline and a calorie deficit (never a good idea if you're breast feeding, fyi) would make sure your belly was ironing board flat as soon as the baby evacuated.

But we've come a long way in seven years. This week, Katy Perry shared this, in honour of the VMAs, that she was not attending. 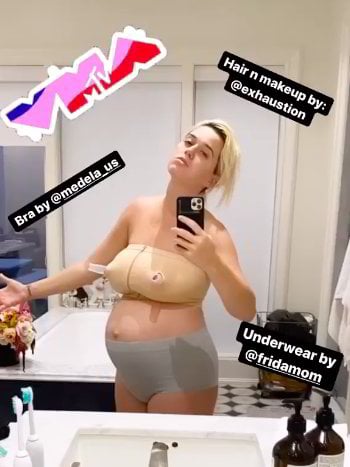 Look at that goddess of a woman with the milk-shooting pumping bra and the disposable pants (the only kind of pants you want in those early days) and the pale face and swollen belly button. She looks glorious.

And there will still be a whole cohort of women saying, 'Oh, but didn't she already HAVE the baby?'

YES, yes she did. And this is what some bodies look like after having a baby (not all, because we are all built differently, but so far I've never actually met a woman with an entirely self-flattening stomach).

When it comes to pregnancy and birth our bodies are, even to us, a foreign country. And mostly, we've been given the wrong map.

The map we got had instructions that read it was important not to "eat for two".

That our actions and intake could control how our pregnancies looked on us. The maps we were handed didn't take into account how tall we were or weren't, how our own mothers had 'carried', what shape we were to start with.

The map just suggested that the route to an acceptable "baby body" was to look exactly like you did before (preferably slim) but like you were smuggling a volleyball under your shirt. The cardinal rule of the map's directions was 'don't look pregnant from the back'.

Thankfully, now, we've pretty much ditched that map for our own, personalised GPS directions. We saw the way even rich, privileged, objectively beautiful women were torn apart for looking 'wrong' during their pregnancies (Kim Kardashian, anyone? Beyonce?).

We've seen how women whose bodies are their livelihoods could feel wretched with self-loathing about their own flesh and blood after they give birth (the exceptional Tiffany Hall).

It speaks volumes about where we're at on the post-baby map now that fitness influencers like Emily Skye (2.5million followers, if you don't mind) would post a beautiful pic like this one: 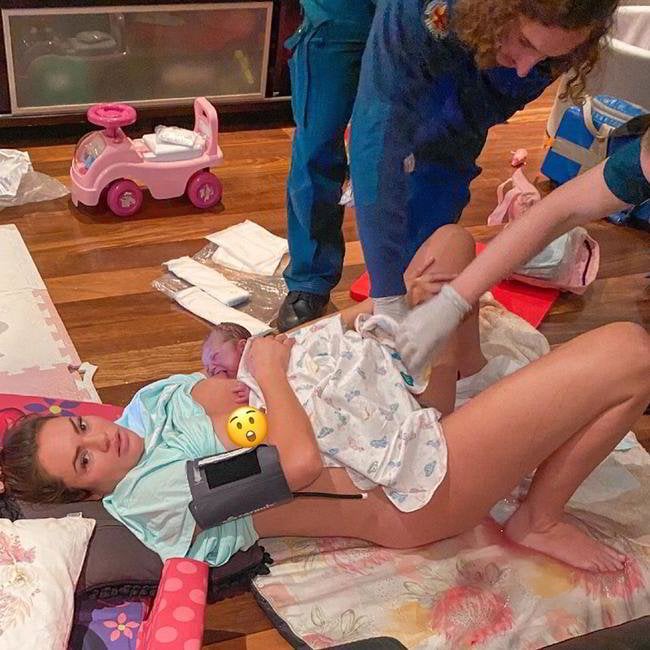 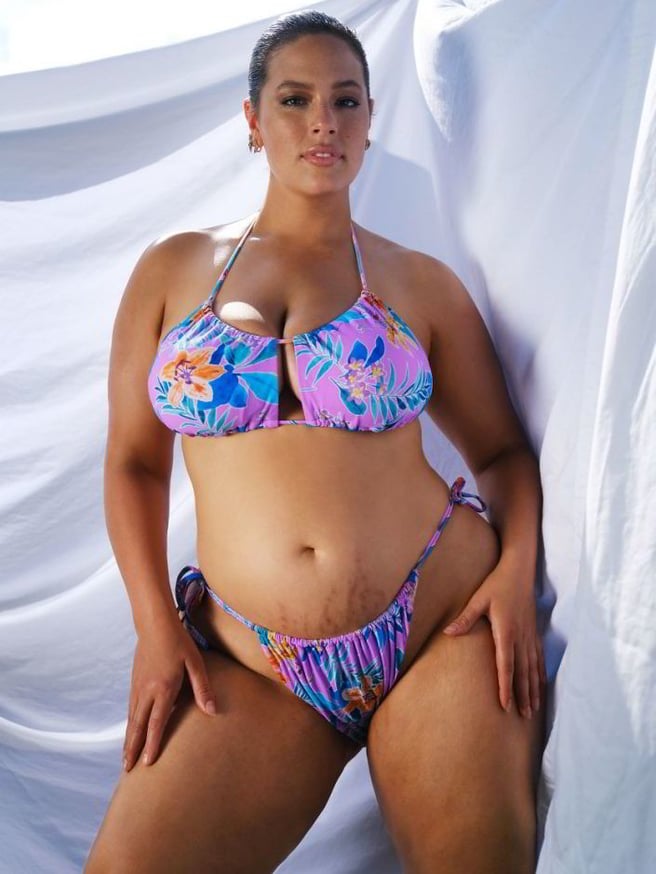 And slowly, slowly, they're filling in little sections of the map for us.

Because the vast majority of us will have other things we need to be worrying about after we've given birth: Stitches and breast-feeding, pain and strange oozes. Sleeplessness, bonding, finding some sort of rhythm in a life turned on its side. Why would our bodies look the same after babies, when absolutely nothing else does?

I'm sure versions of the three-part magazine deal still happen. But I'm also sure that thanks to a less Photoshopped image of new motherhood, a generation of women will be a little bit kinder to themselves at the most vulnerable time of their lives.

And there's a reason to be cheerful. Thank you, Katy Perry.

This article originally ap﻿peared in my weekly newsletter. I have a new novel out. It's called I Give My Marriage A Year, and it's available here﻿.

Reply
Upvote
1 upvotes
Have things *really* changed that much, just because we can cite a small handful of celebrities who have opted to publicise their post-partum bodies in a different way? The vast majority of post-baby bodies on the internet are still curated up to the eyeballs. And let's see how long it takes until we see the likes of Katy Perry, Emily Skye et al slimmed down to their original weights. It might take them longer to "snap back", but the snap back is almost inevitable. I'll give you a dollar for every "successful" female celebrity you can name who has stacked on weight and not taken it off. The ones who remain overweight (or even a "normal" weight) for an extended period fall from grace until they get skinny (see: Kirsty Alley, Jessica Simpson etc).
The bigger issue is how much the state of women's bodies has become an issue for public consumption and interest in the first place. We really should be aiming for a situation wherein the appearance of a woman's body is of no interest or relevance whatsoever, rather than celebrating when the ritual is performed in a different way!
M
mamamia-user-405278599 2 years ago